Will I need to change out box to hang 16lb ceiling fan?

Just got a Hunter 42in ceiling fan, and it's about 16lbs. I am hanging it in the kitchen. The house was built in 2015 and I have pictures I took during the rough in electrical. It's conduit and I see it's a standard box, mounted to one joist, with conduit coming in though the side.

Will I be able to hang a small fan off this that is 16lbs?

I came across this YouTube video showing how to knock out an old box and put in a fan support by twisting it in. This is in between floors, so I would have to knock it out like the video, if even possible with the conduit nipple against the box. 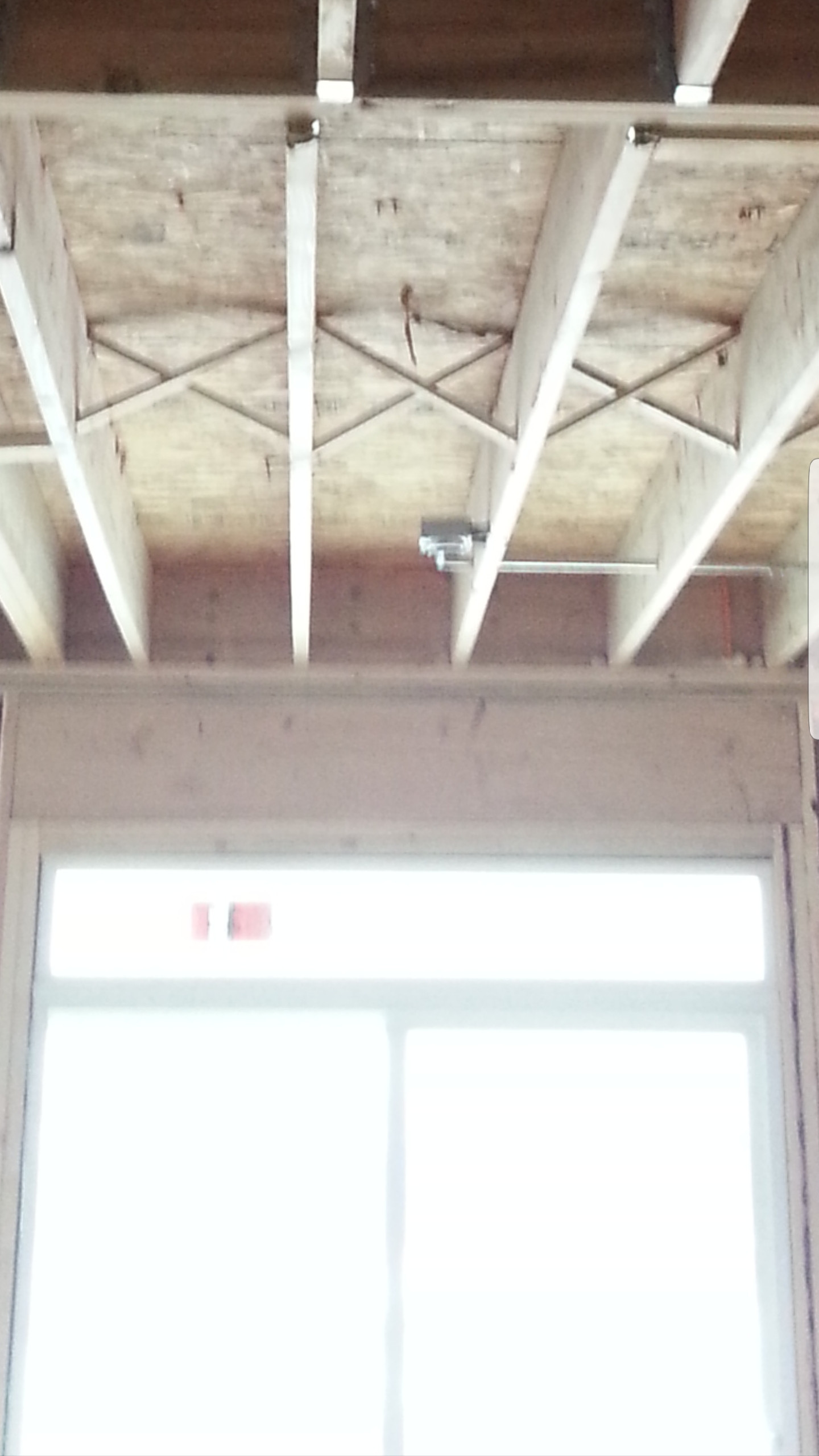 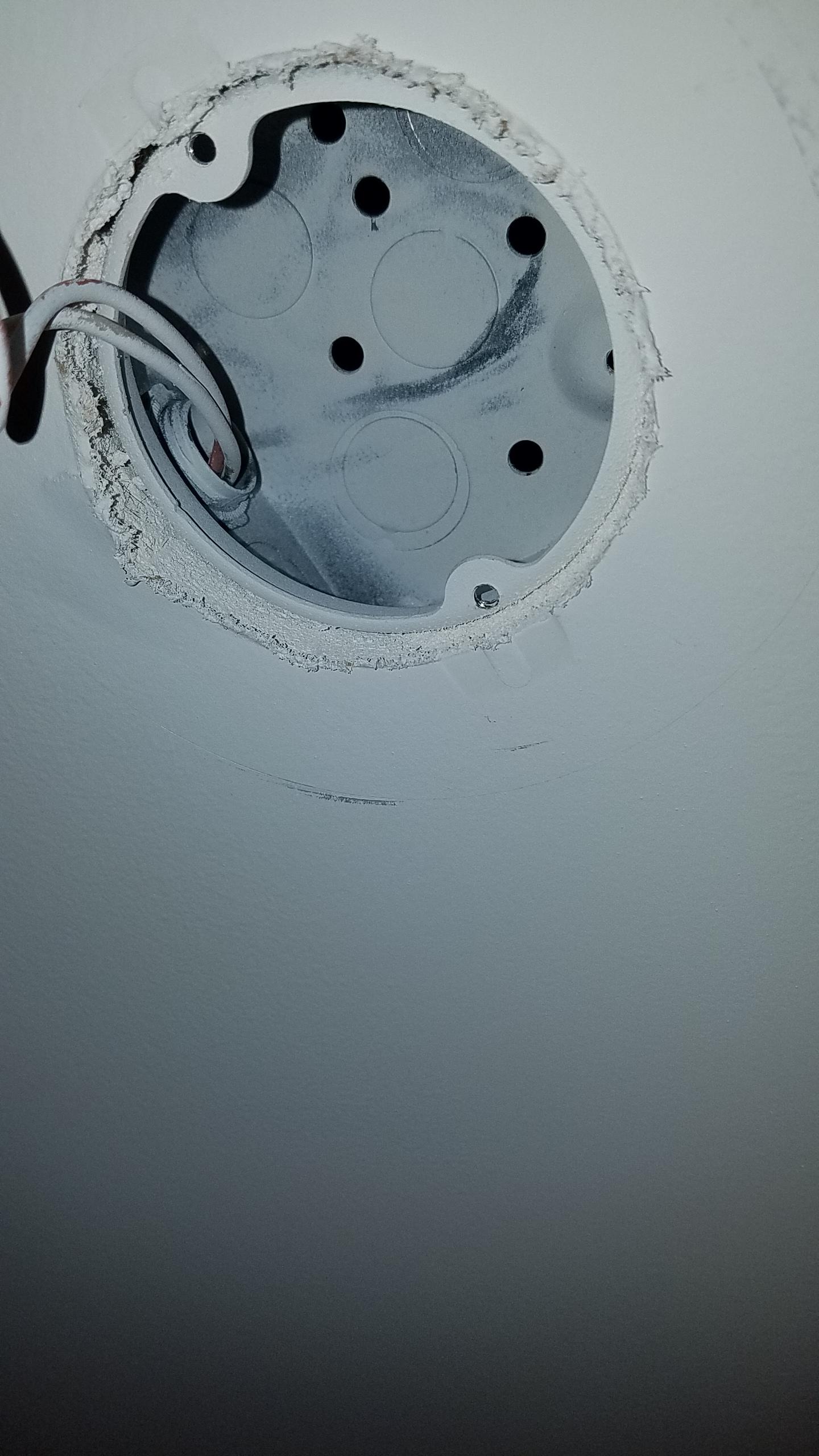 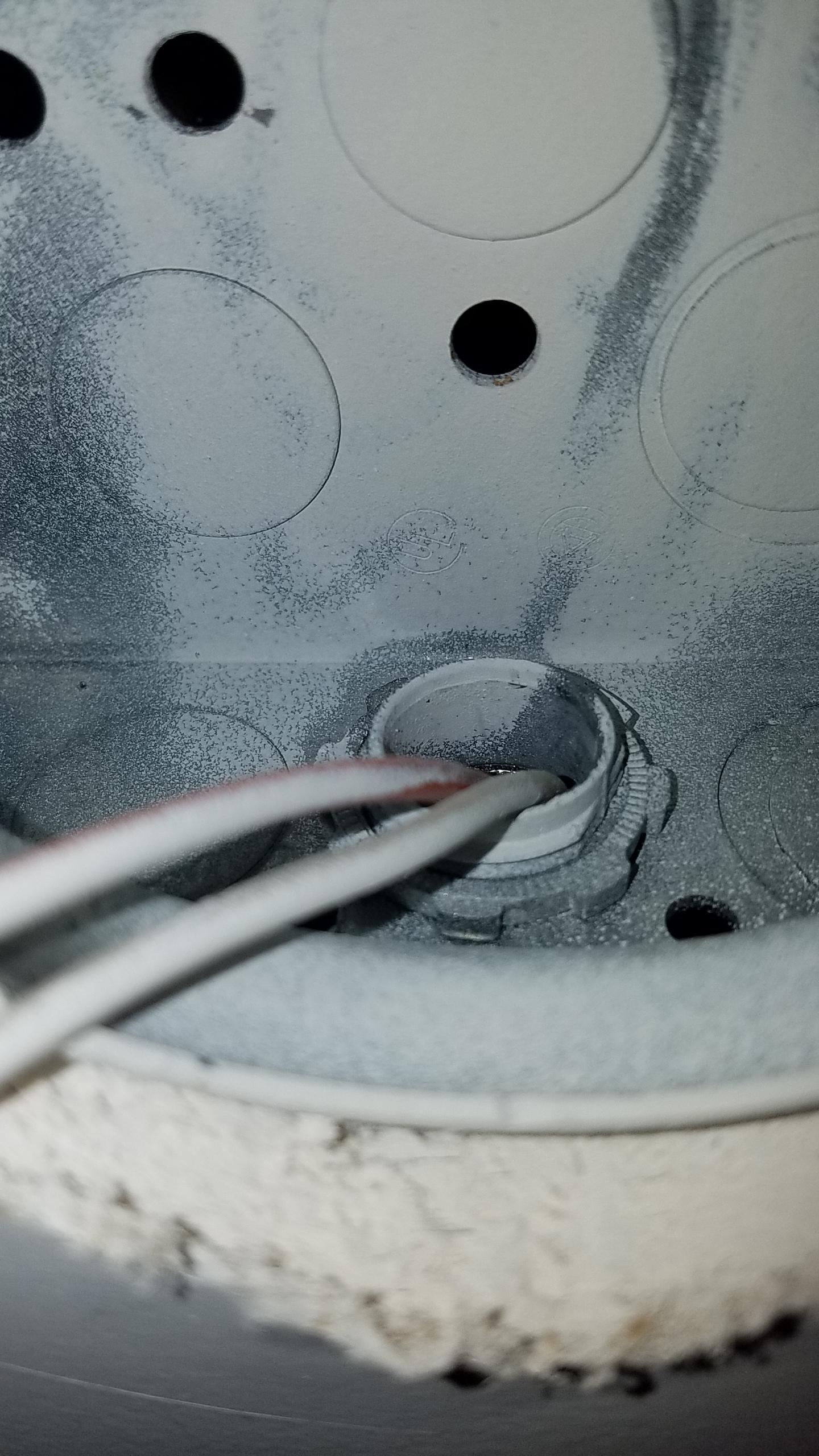 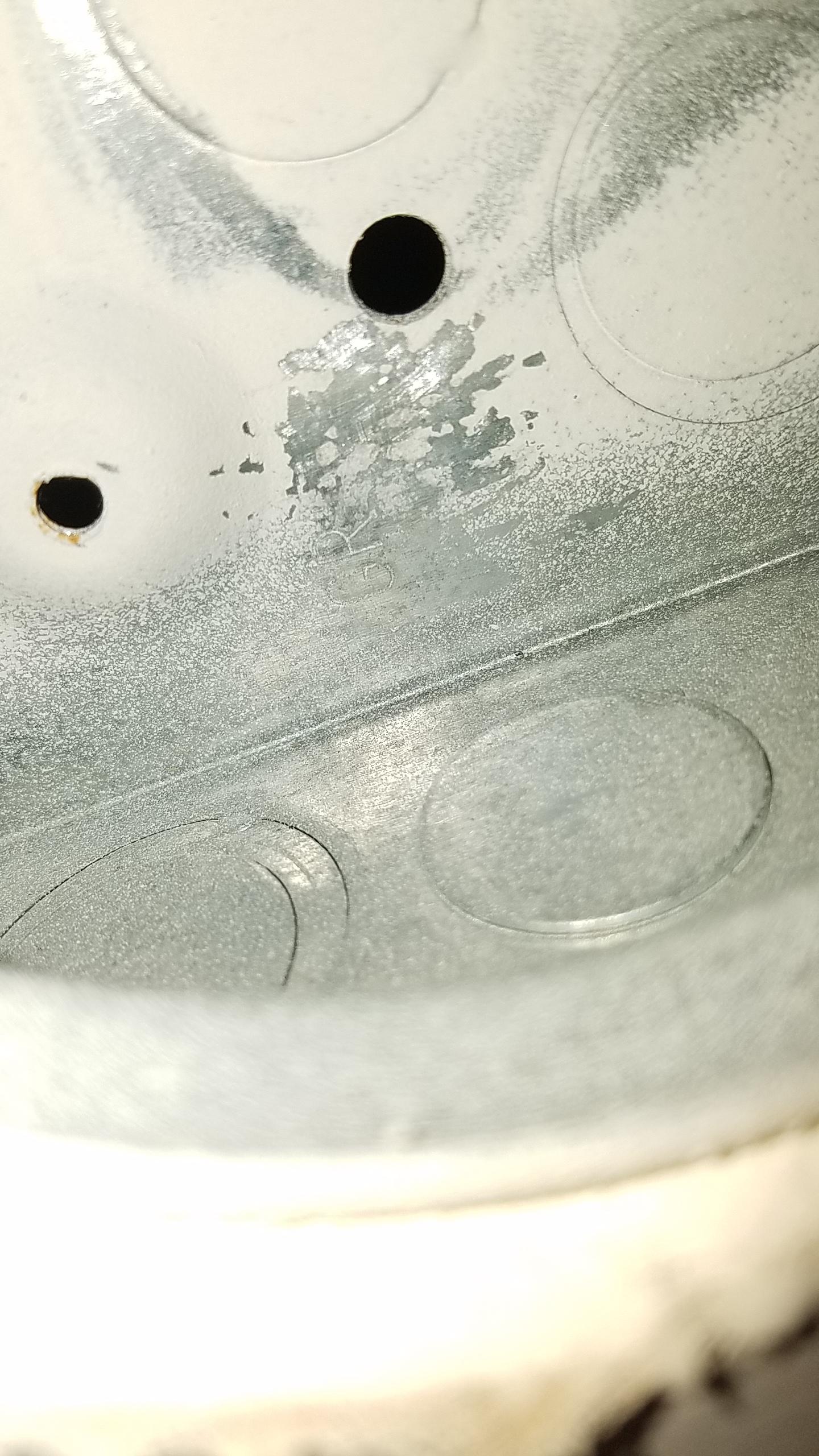 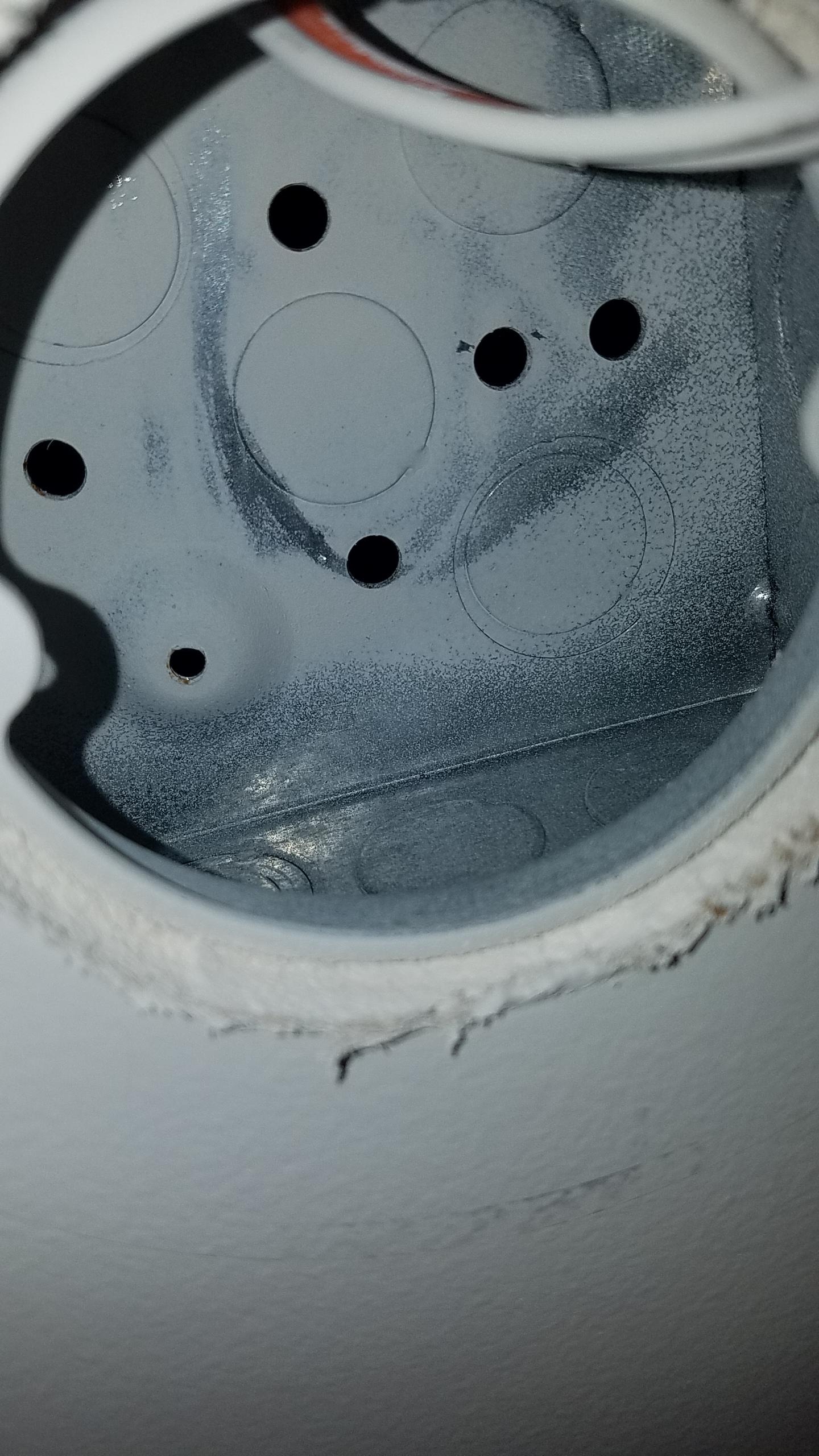 How much force does an 3 pound hammer hit with? Just 3 pounds, right? Just place the hammer atop the nail and the nail drives in from the fearful force of 3 pounds? No, that's not how hammers work, hammers involve a dynamic force that is much larger.

That's not how fans work either. Fans are mostly dynamic force because of their spinning and vibration. It would be 16 pounds if you never started the fan; likewise the hook on my tool rack only has to contend with 3 pounds.

If you use a non-fan-rated box to hold up a fan, the fasteners will walk themselves out from the vibration, and you'll drop a fan on somebody's head. If that's a welded steel box, it could even crack the welds. (drawn steel boxes won't have that problem, at least).

So you'll need to do a box-ectomy, and the trick is to confine the drywall damage to what will be concealed by the fan shroud.

Tape the 2 wires together (obviously, do this with the breaker off). Since it's conduit, you'll have to find the other end of that conduit and pull back the red and white wire so it's just an inch inside the pipe, then unbolt the conduit (the castellations on that wacky nut are to give you a place to put a screwdriver so you can bap it to make it rotate; remember lefty loosey.)

You have to be careful positioning the new fan-rated box so a knockout on the box will align with the conduit pipe; it's probably EMT and hard to move. There's no benefit to removing the fitting from the end of the pipe unless you need the clearance to work. It's only an inch of clearance anyway. The fitting has to go back on the pipe before the box is fitted because you must tighten it (for grounding; that's the ground).

Then go to the box from which you pulled the wires back, and push them back toward this box. Pushing usually works if there's only one 90-degree-bend in the pipe. Or reach into the pipe with a narrow needle-nose and grab them. This is why you bundled them together: so you could grab them now.

With a steel box like that it's not so much a matter of it being fan-rated but how well it's attached to the framing. It may not meet code, but it may hold the fan just fine. You decide your priority.

I would give it a firm tug. Does it flex at all? If it feels solid with 50 lbs. of you hanging on it, I'd trust it to hold a light fan. Just be sure that the screws you use to connect the fan bracket to the box are of the correct size for the threaded holes, and don't overtighten and strip them.

Not the answer you're looking for? Browse other questions tagged electrical ceiling-fan conduit or ask your own question.

0
Is ceiling fan missing grounding wire from the ceiling box, and is this safe?
1
How do I wire a hard-wired wall switch and a remote for my ceiling fan/light?
6
Ceiling Fan Junction Box Converter/Bracket 1/2 inch width difference
3
How to tell if old ceiling light box can support ceiling fan?
4
How can a ceiling fan be mounted to a fan-rated box that has been extended?
1
Ceiling fan mounting, old home, worried I did it wrong
4
remedying ceiling fan horror-show
2
Mount ceiling fan box to underside of joist
1
New (Hunter) ceiling fan install wobbles
1
Installing a ceiling fan onto an old pancake box