Electrical Outlet arc burned the wire. Do I need to replace the entire line?

Wife notice an odd smell (sort of like chlorine) coming near an outlet last night. I immediately shut off the breaker and took off the covers to investigate. The last homeowners put in one of these outlets with the USB – A ports in them. It seems that one of the neutral wires slipped away from the screw and started arcing with the hot line above it, melting the plastic.

We got lucky that we caught it. My plan was to clip out any wire with the damage to the insulation, and properly secure the wires in a GFI outlet (its in the kitchen and wasn’t done properly to begin with. My question is whether I need to worry about damage in the rest of the romex line? Not sure if an issue like this means I should replace the entire line or not.

Also it seemed a little odd to me that this outlet has the Hot and the neutral are so close together. On most AC applications it seems that there is some distance between the lines, which could prevent a little slip like this from causing a major problem. Is this common in other places that I just might not be familiar with? 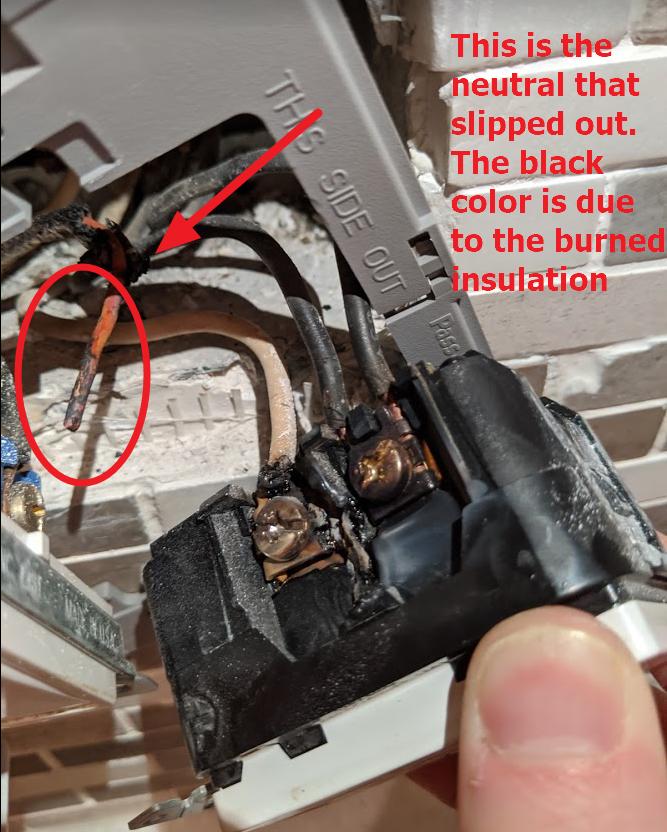 The rest of the NM cable should be fine. When I install outlets like this, I pigtail the wires and connect the single wires to the outlet and still use a shepherd's hook behind the clamp.

The closeness isn't a problem if done right. You can have a split outlet with different legs so you've got 240 volts just that close.

Is this GFCI necessary?

The fastest way to do this is install a plain recep and use a GFCI tester, assuming the ground wires are good throughout.

Any outlet that is GFCI protected needs a sticker saying that. Or an artsy faceplate or whatever, they're not particular.

GFCI devices are able to protect downline loads. That is the solitary purpose of the LOAD terminals, which should never be used for any other purpose. It's easy for Johnny Sophomoric (who learned just enough to be dangerous) to make a whirlwind tour and slap GFCI receps everywhere and create a fiasco where resetting it is like playing Myst.

Yes, just strip the insulation beyond the obviously-damaged areas, and cut the copper back to beyond where it is discolored (annealed).

At this point you must have 3" of wire beyond the face of the wall, and 6" beyond the cable clamp. If you don't have that, you'll need to pull more wire through from the wall, or replace the cable.

This is why I discourage cutting excess wire length.

As far as the device's near connections, I would check the device for a UL, CSA or ETL listing with a file number. If that is present, then it conforms with UL White Book safety standards. If it says "CE" or not much at all, it may be cheap Cheese junk direct-imported (including bought off the scummy Amazon Marketplace)... search the house for any more like it.

6
How do I wire a switch to control a GFCI Receptacle?
1
2 prong wiring nightmare
2
Duplex Outlet-Open ground only on top
1
Should I replace my GFI outlet with a GFI breaker?
4
Outlet with ground wire attached to socket ground and neutral
0
Outlet Change with 4 Hot Wires
2
Switched outlet to unswitched usb
1
Replacing an outlet with white black and red wires with a usb outlet with 2 terminals
0
Outlet grounded by conduit - how do I add a second outlet with Romex?