Seeking advice on how to rearrange existing breakers and add 2 circuits, including a 20A GFCI/AFCI breaker in a split-bus GE panel

My panel is a GE TX1612RH split-bus 125A panel (photo below). It is an outdoor panel, vintage 1980 when home was built. I want to run two 20A circuits to a shed 60-ft away and would like to know if the following changes are advisable and in accordance with Code: 1) Move the 2-pole 30A (thin) breaker for A/C to the slot immediately above the 50A "Sub-Main" breaker, thereby consolidating all 240V loads in upper portion (I think the A/C contractor goofed on the electrical portion); 2) Install a 20A "thin" breaker in lower-left slot for a dedicated circuit for an in-wall 120V shed heater (blank-face GFCI will be upstream of in-wall heater); and 3) Install a "full-width" 20A GFCI/AFCI breaker for everything else in the shed, using the slots formerly used by the 2-pole 30A breaker. Regarding #1: Is it OK to use "thin" breakers in the upper bus, or should I replace the 30A thin breakers with the full-width variety. Many thanks!

Update #1: Photo of panel interior has been added. Unfortunately, there are no placards or labels on inside of panel door or on back side of cover, so I'm driving "blind." Googling the "K849 *" reference (top of back of panel), I found nothing.

Update #2: The A/C contractor (in 2008) used very MINIMAL wire to reach the 2-pole compact 30A breaker -- not enough wire to extend to the new and proper position of a full-width 2-pole 30A breaker above the existing 2-pole 50A breaker. Any suggestions for a remedying this dilemma? Rules for using red-head connectors wrapped in rubber and vinyl electrical tape? Or must I pull a new run of #10 copper conductors? 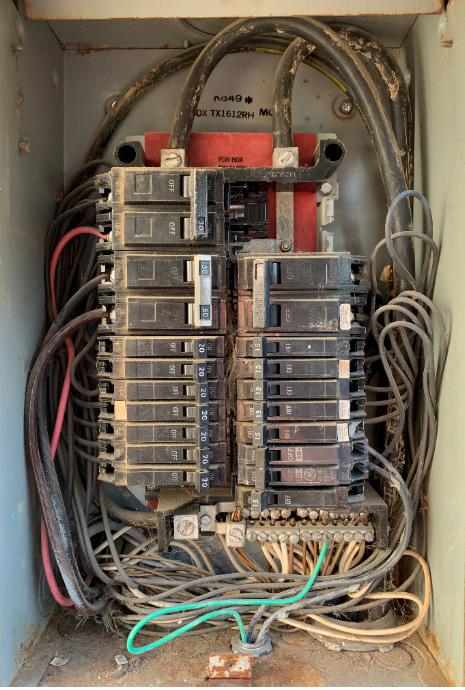 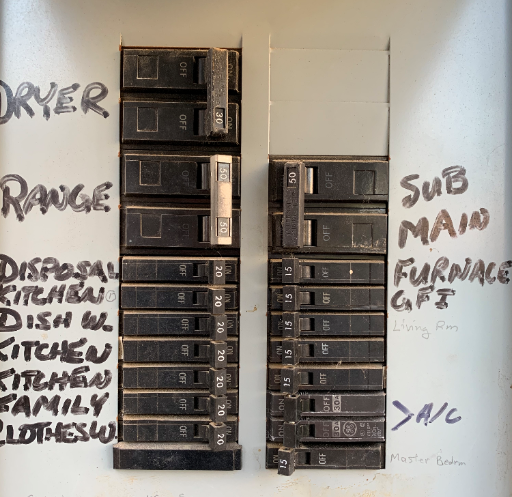 This is a split bus aka rule-of-six panel. They were originally developed because breakers over 60A were cost prohibitive (no longer true). They are outlawed now, and are dangerous because nothing prevents you from overloading the service.

They were allowed when a load calculation was done that showed the house would not overload the service; however, when people add circuits they don't bother to do another load calculation, and that's the danger. Normally a large load like the A/C would be put in the Rule of Six area; putting it in the Lighting area makes me wonder if they did a load calc and it went badly. Any idea what came out of that space?

GE and their double-stuff rejection system

GE has a funny way of doing double-stuff breakers. All their bus stabs look like normal bus stabs, a flat horizontal blade maybe 3/8" to 1/2" wide. However, on spaces enabled for double-stuff breakers, they have a vertical rod - I call it a "cruciform" for the way it crosses the bus stab. The double-stuff (1/2" wide single and 1" wide 2-pole) clip onto this cruciform.

In 1966 NEC added "CTL" rules limiting the number of double-stuffs in a panel. They required mechanical keying to reject double-stuffs where not allowed, so most builders notched their bus-bars and came out with "CTL" breakers which would reject in a normal space. (as well as non-CTL breakers to support pre-1966 panels, haha, guess what everyone did). GE simply omits the cruciform. Which means, there's no way to trick a double-stuff where GE doesn't allow it.

In a split-bus aka "Rule of Six" panel, there can only be six breaker throws to de-energize the whole panel. So there would be no earthly reason for GE to install the double-stuff-enabling cruciform in those spaces.

Now, this panel only supports four full-size 2-pole breakers in the "Rule of Six" section. You might think GE intends you to use three 1" wide 2-pole breakers per side. Looking closely, it appears the cruciforms are in exactly the right place to support just that - note there is no cruciform on the top half of the top space, so you can't put a 1/2" wide 1-pole there. You'd have to leave that empty.

Rule 225.30 says you can only run one circuit to an outbuilding. The rule intends that be a feeder to a subpanel. However, there are certain exceptions:

One option is to get a full-size 2-pole 30A breaker, place it in the open position, and use it for the A/C. This will require extending the A/C cables, but you can do that with normal (well, large red or tan) wire nuts.

That frees up the 2 double-stuff spaces for 2 thin breakers (or a 20A 2-pole for an MWBC).

Any now-empty breaker knockouts need to be filled with a blanking plate - you can't have curious fingers finding bus bars. I find those blanking plates to be expensive, hard to find and very flimsy - so I prefer to arrange panels so all holes are full of real breakers. Which are not flimsy.

In my very similar GE panel the sticker diagram indicates that the upper section will NOT accept compact 2-pole breakers (1 inch wide) on the right side, but will accept them on the left side.

The simplest way to connect your ac in the upper section would be to use a full sized 30A 2-pole breaker in the upper right. These are very cheap, but you would have to work on the panel hot. I have changed breakers in the lower section of my panel without switching off the 60 A main breaker, but the upper section presents greatly increased risk if you would make a mistake or if the breaker was defective in a certain way (shorted internally) which I must assume never occurs in practice.

The diagram on the sticker in my panel shows that compact 2-pole breakers MUST be inserted in a way not immediately obvious to an inexperienced person, but clearly correct when you think about it. The compact 2-pole breaker must be ASTRIDE (bridging) two full slots. It cannot be placed in one full slot. It will not snap in and it would not work there because both contacts in a full slot are on the same leg.

In my panel if I wanted to increase the number of 2-pole breakers in the upper section from four to five, then the two full sized 2-pole breakers on the left would be removed and three compact breakers put in their place.

Note that in your panel the compact 30 A 2-pole breaker in the lower section is astride two full (1 inch wide) slots. If you ever move it, it must be inserted that way.

2
Multiple circuits in the same conduit to outbuildings