How can I safely get power strip to desk in center of room?

I can't even tell if this is a stupid question anymore.

I have a desk in the center of a 12′ × 13′ room, on which I would like to have a power strip to power a computer and other, less power-hungry devices. After my first, definitely stupid and dangerous idea (to run an extension cord under a rug), I started looking into the NEC and the UL White Book and the difference between "relocatable power taps" and "multioutlet assemblies" and now I feel like I have no idea what is safe.

Here's what I think I know:

I should also note that my computer has a 1200W power supply, and while I've never actually measured it using nearly that much power, to have a margin of safety, I want to assume that it could basically start drawing 10A at any time. Therefore, whatever powers it should both be rated for that level of current (ideally the full 15A that the room's circuit can provide) and also be installed in such a way that resistance heating in the power cord isn't a fire hazard.

So it seems like I have three general approaches:

What should I do, and which of these various questions and concerns are actually safety issues versus misunderstandings or excessive pedantry?

(If relevant, I live in Connecticut, USA.)

Use the right stuff

The issue with cordage as a substitute for permanent wiring of the structure is not a “don’t do it” issue: it’s a “use the right stuff” issue.

“The right stuff” is appropriate wires designed for permanent use in structures, including appropriate physical protection. For instance instead of stapling cordage to a wall, you should use surface conduit with THHN wires inside.

Of course, that requires a transition from the THHN to the cordage at some point. That happens at a junction box, e.g. with a receptacle in it; the easiest way to transition from hardwiring to cordage.

Consider a pendant for center-of-room power

A pendant is a piece of special cordage with high quality strain relief on both ends (think the Chinese finger puzzle webbing) that drops straight down from a box on the ceiling down to a junction box suspended in midair by the cordage. You then plug into that recep.

Probably best to use a fan-rated ceiling box. This can be a surface-mount box (you’ll need to find the studs) which in turn can be supplied via surface conduit such as Legrand Wiremold.

The suspended box would probably be a metal box rated for a fan, since they are tough and built to endure tugs on the pendant.

If you want to be very fancy, you can have the pendant lock into a locking connector like a NEMA L5-15.

That PC power supply is a terror

That “1200 watt” PC power supply is a gigantic beast made for gaming. The “1200 watt” figure is the actually useful DC output of the supply; it is NOT the AC mains input — that is affected first by the efficiency of the unit and by the power factor.

I would revisit the necessity of such an ostentatiously large power supply.

I would use a cable protector.

It is true the NEC doesn’t want cords used for permanent installs but a movable desk is really not permanent even though it is going to be there beyond the 90 day temporary rule. I would use something like Electra duct a plastic ramp like cover to protect the cable and prevent tripping. There are many other types like, pedestrian cable covers, and durable cable ramps. I just searched for power cord floor covers. And found the above examples.

In commercial facilities they use a hard wired version that has the cord covers for both power and data the only difference is there is a box extension to connect the assembly that then goes on the floor to the wall sections.

As your desk is not a permanent fixture even though being in place more than 90 days the cord protector should be fine for your use I would suggest a heavy 12 awg cord since you plan on a heavy load, if you have a 15 amp breaker 14 awg would be ok.

The place I normally see problems is at the receptacle where a cheap $1.00 contractors grade receptacle is used and possibly back-stabbed.

A spec grade receptacle like a back and side type using the clamps would be better. These receptacles have better contacts and a higher withdrawal force reducing overheating problems at the plug.

The last thing I thought of was a 90 degree cord cap this replacement plug plugs in like normal but the wires exit at 90 degrees to the wall so there is no side force on the contacts. I use these in offices for this reason and when the office personal move things around these hold up to something being pushed into them breaking the receptacle and plug.

Posting this as an answer to be able to use an image, but this is what Ed Beal was referring to (concept, not the brand). Lower picture is what it looks like flipped over, showing the track that the cord snaps into. 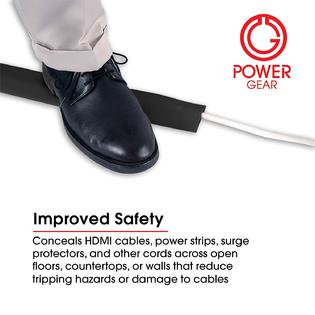 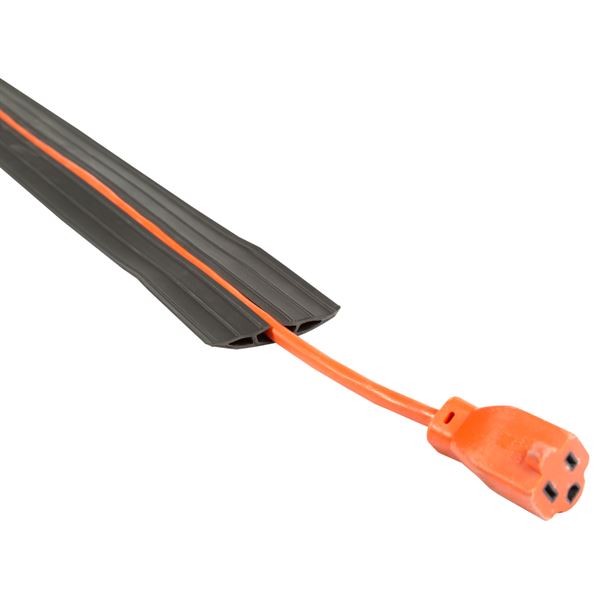 You can get them at office supply stores or on-line.

The Code is for premise wiring that would stay with the building when you leave, not how you set up and use things while you are there.

Not the answer you're looking for? Browse other questions tagged electrical wiring nec or ask your own question.

2
How do I appropriately/safely connect multiple power tools to a 20-amp outlet?
1
My power strip has (what appears to be) a burn mark. What do I do?
3
Can I use an outlet splitter with my air conditioner?
0
Best way to get power to stair lights
0
How to safely add power switch to power strip?
1
Is it safe to plug christmas lights into a power strip or surge protector that's connected to an extension cord?
0
What is this "appliance control" power strip?
0
What kind of cable is this? (herman miller standing desk motor to power supply)