How to seal a pipe pass-through in a basement wall

My house is 15 years old, and ground water has suddenly started to leak into the basement around a pipe that passes through the poured concrete foundation. The method of installation complicates the repair.

An iron pipe sleeve (roughly 4"D), is sealed to the wall with spray foam. A 3" PVC drain pipe passes through the sleeve, with more foam sealing between it and the sleeve.

There aren't signs of leakage between the two pipes, it's all between the sleeve and the wall. There appear to be small leaks between the foam and the concrete. However, much of the water enters around the sleeve, between it and the foam.

I cut away most of the foam to find the source. Some pieces cleanly separated from the concrete, indicating that it wasn't bonded. Around the sleeve, all the foam cleanly pulled off. Embedded in the foam was a layer of black. It looks like water rusted its way down the sleeve. The surface of the pipe remained bonded to the foam, and water leaked under that. There is some powdery residue on the pipe that's a mixture of black and some rust color. The sleeve otherwise seems virtually intact.

Is there a good, permanent solution? What I've considered:

The location is blocked by a utility sink and a water heater, so it's difficult to get at the pipe, to see what you're doing or work on it, and to take pictures. 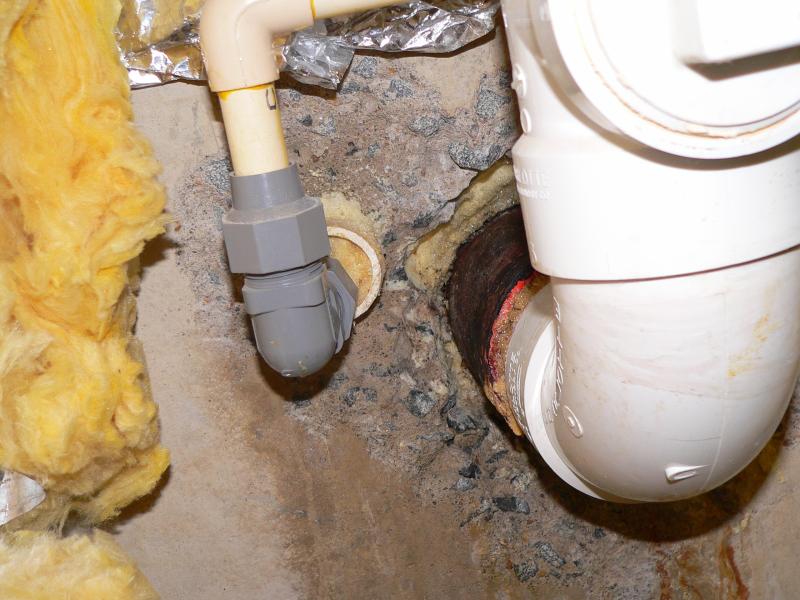 There are actually two pipes running through the wall in this location. To the left of the subject pipe is the water line. Some of the concrete around the two pipes was broken away at construction time; that was all filled with foam before I removed it. There's still some remaining above each pipe sleeve. There's also some leakage around the water line sleeve due to gaps in the sealing foam; that one isn't an issue because the sleeve is PVC and sealing that one is straightforward. 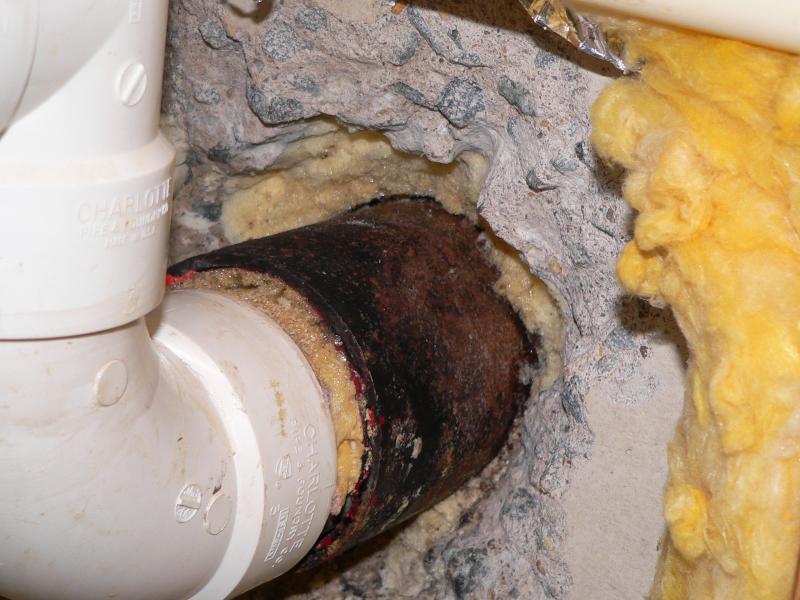 This view is the right side of the problem pipe.

I would remove all the foam you can from the outside of the metal sleeve pipe, then coat the pipe with epoxy, then fill the rest of the material with any suitable concrete patching material. You can easily find epoxies that bond to metal and concrete, and bond when wet - many will even cure underwater. So you know it will bond to both the pipe and the patch material.

You could use all epoxy as long as it can be mixed thick enough to work on a vertical surface but if there's a lot of material to fill in, it might get expensive.

If you're concerned about the rust on the metal sleeve pipe, you could treat it with a rust stabilizer product. These products turn rust to a black oxide and work OK, depending on how deep the rust goes. I don't know if you could determine for sure the epoxy will bond to the black oxide although I suspect it would. It may not be that important since the sleeve is not structural and the epoxy will hold things together to some extent.

Gorilla glue or other polyurethane glue is popular (great, great marketing) and performs pretty well for its intended uses but it's one of the most overrated products around. It's not as versatile as people want it to be. It is pretty close to expanding foam, in fact it foams up to fill gaps. I would not try using it for anything here.

Not the answer you're looking for? Browse other questions tagged plumbing leak foundation or ask your own question.

1
How to seal a foundation wall hole 7' feet deep around a 2" pipe in a cold heavy snow climate
0
Alternative methods to control water leakage at pipe pass-through in concrete wall?

2
How to fix leaking basement window in foundation
1
Handling basement water infiltration behind bulkhead
0
Water seeping through where pipe exits slab foundation
1
How to seal the hole for a spigot through a stone wall
1
Replacing 2 inch vertical cast iron pipe going through concrete
1
Sleeve for below grade pipe penetration
0
Fixing sump pump discharge
4
How to seal around metal gas pipe penetration through poured concrete above ground?
0
Alternative methods to control water leakage at pipe pass-through in concrete wall?