5 Post Pergola Design - How big to make the beams and rafters?

I'm building a new deck and pergola in my backyard. The deck is pretty much done, and the pergola posts are in. I'm now I'm trying to decide how to finish up the pergola.

Deck is built on 9 posts, poured concrete 4' deep. The pergola posts are secured onto Pylex foundation screws 4' deep and then also secured to deck and blocked it (you can swing on them and they won't move). Everything is cedar (PT under the deck, but boards and posts and all the other pergola materials will be cedar).

I'm trying to decide what to do for the pergola beams and rafters/joists. I've had some feedback saying just use 2x8 for the beams and 2x6 for the joists, and then add strips running perpendicular on top to prevent rotation, although after searching around online I've seen people mention that 2x8 and 2x6 may look too small with the 6x6 posts.

I've attached a diagram of what I'm looking to do, along with a picture of it at its current state. The alternative I was thinking about was 2x10 beams with 2x8's for the rafters.

The overhang that I'm proposing to create is also a bit of a concern since I don't want the ends of the joists to sag.

I'm looking for structural feedback along with aesthetic feedback (if 2x8 and 2x6 will work but look like trash then I'd rather just go up a size). 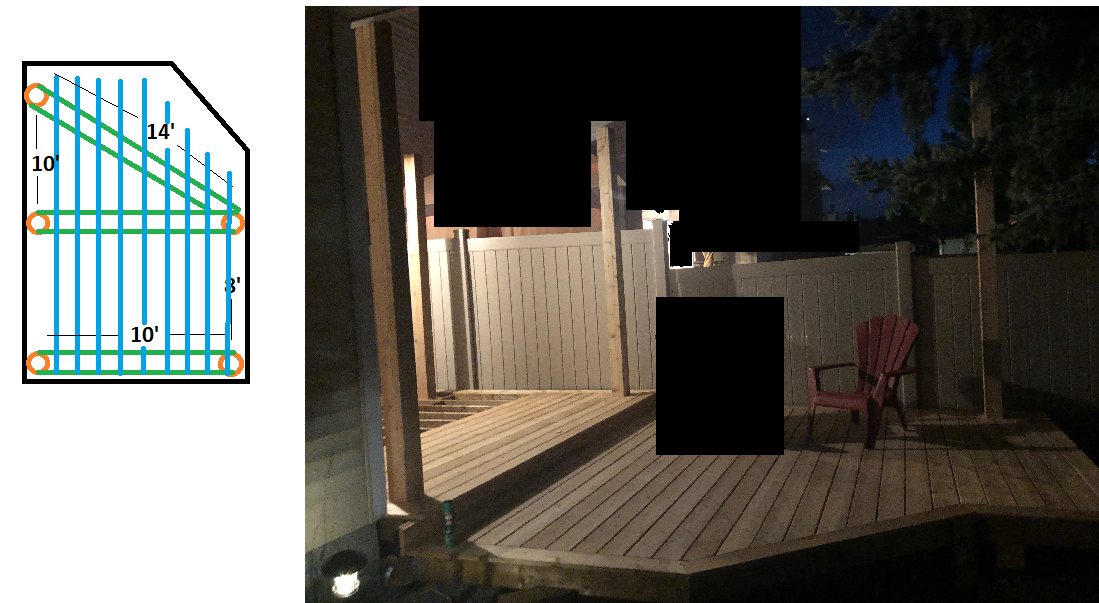 Browse other questions tagged deck backyard pergola or ask your own question.

8
Can I use 4x4 posts as the primary support for a deck?
14
How do I improve Pergola Stability?
3
Can I build a pergola on an existing deck, without digging more footers?
3
Adding a pergola to an existing deck?
0
Pergola : Can I use 4 - 6x6 post, with 2x10 beams sandwitching 6x6 post for 17ftx17ft
1
Please help - wonky post location on pergola - concerned with shearing and stability
1
Pergola rafter spans
2
Adding a pergola to my deck; ok to replace corner railings posts with pergola posts?
1
Are 2x6 rafters adequate to carry a day bed in a pergola?