GFCI tester is tripping 15A breaker in panel; outlets on circuit do not appear to be GFCI outlets - is this a problem? 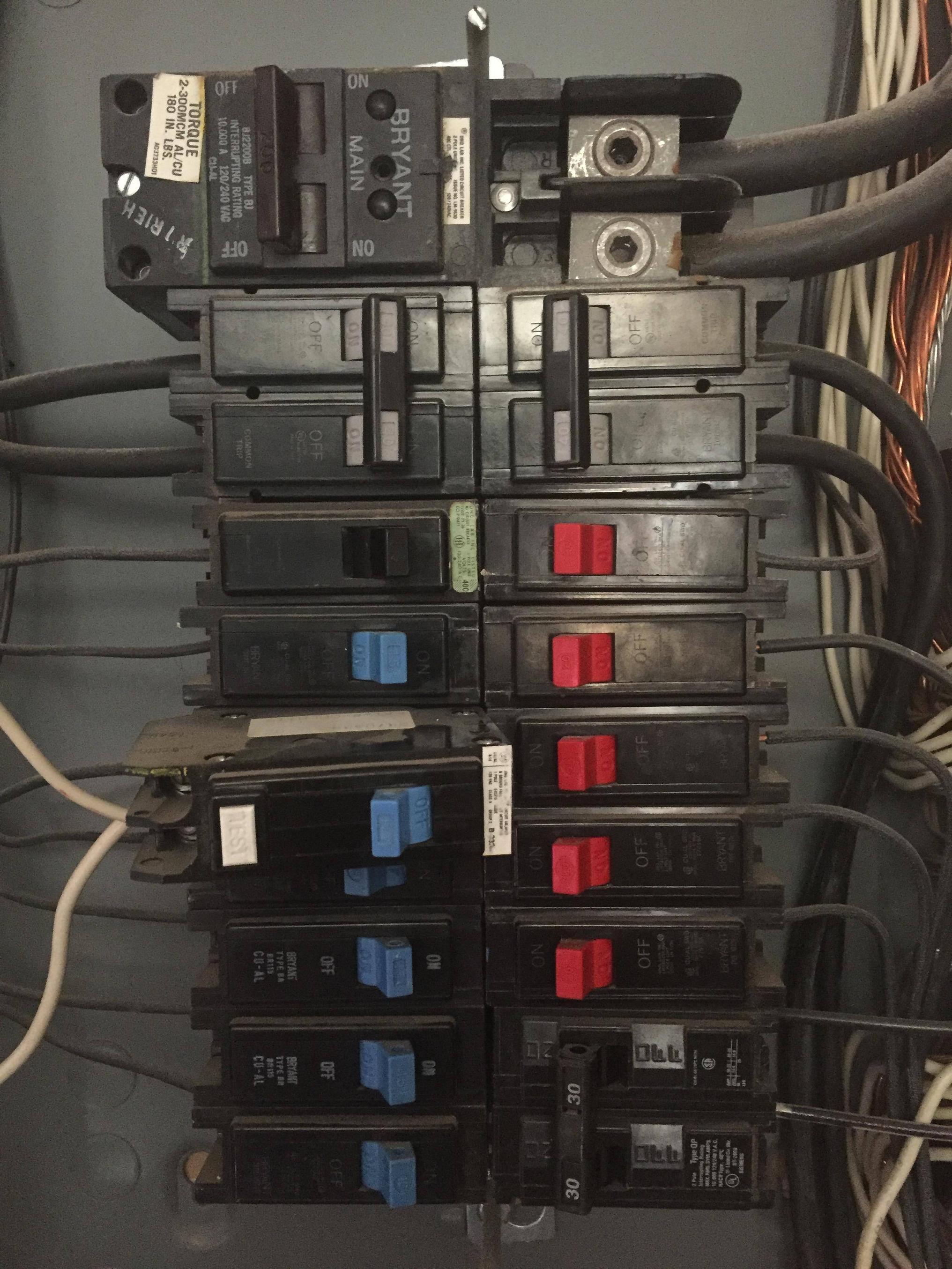 Level of electrical wiring knowledge: Very basic, if that

Problem: 15A single-pole breaker in panel randomly trips - has been doing so since buying house in 2009 (house built in 1987)

Trouble shooting steps: I have an outdoor power outlet and two bathroom power outlets that do not appear to be GFCI. The outlets do not have Test/Reset buttons- there's no labeling for GFCI anywhere.

I bought a $10 GFCI Tester. (Those little three-pronged things with 2 yellow/1 red light and a "GFCI test" button)

When I insert the GFCI tester into the any of 3 known outlets on the circuit (2 bathroom outlets, 1 outdoor outlet) and push the button on the tester, the 15A breaker in the panel flips, killing power to all 3 outlets and the hall lights. Far as I can tell these are the only connections on that 15A breaker. Worth noting(?) this 15A breaker that keeps tripping is the only one in the panel with a test button.

When I insert the GFCI tester into other non-GFCI outlets in the house and push the button, nothing happens - outlet remains hot and the connected source breaker in the panel does not flip.

I have replaced all 3 outlets myself since moving in, but this overall problem persisted prior to me replacing the 3 outlets (2 bathroom, 1 outdoor) - and has persisted since outlet replacement. Breaker randomly flips, often when the A/C kicks on or is running (not on same circuit, per the breaker panel) or the pool filter is running (connecting to outdoor outlet in question) or a hair dryer is used in one of the 2 bathroom outlets in question. Sometimes the vacuum running in the living room will flip it, despite those other outlets apparently not being connected to the 3 outlets on the circuit in question.

Looking for some guidance on what this means. I've since read on this site that these cheap GFCI testers are not really good for old wiring troubleshooting, but I didn't know that prior to purchasing one. I would like to spare the expense of an electrician, if I can. My next thought is to replace all 3 outlets with GFCI outlets and see if that resolves this. Or maybe replace the 15A breaker itself, except that I assume it's doing what it's supposed to do - trip when there's a problem on the circuit.

Worth noting(?) this 15A breaker that keeps tripping is the only one in the panel with a test button.

Because it is a GFCI breaker.

The GFCI rabbit hole gets weirder: Any GFCI device (recep, breaker, deadfront, switch, combo switch/recep) can protect downline circuits. So if you have a GFCI recep at spot 1, and cable going onward to spot 2, there is an option to wire it so the GFCI recep at 1 protects both the cable to 2 and the outlet at 2. Or 3 or beyond.

In fact that is exactly what a GFCI breaker is doing: protecting the whole circuit.

The reason this wasn't apparent to you is that the receps did not have the mandatory sticker: GFCI Protected. As such, they were a code violation and need to have the sticker added.

This puts the "random trips" in a whole new light.

It's simply ground-faulting of the various appliances. Keep in mind that small leakage from several appliances can add up to enough leakage to trip a GFCI device. So an additional appliance (like the vacuum) can "push it over the edge" as it were.

However, a 2-prong appliance is unlikely to cause a GFCI trip unless it is ground faulting internally and it contacts something grounded. (E.G. if the vacuum tripped everytime you vac'd under a water pipe or something).

If you have a cyclical load like an air conditioner that sometimes trips it, then the trip will appear to sporadically occur with any appliance you regularly plug in: the appliance isn't at fault, the other load just happened to choose that moment to trip it.

If unrelated circuits trip it, it's possible the 2 circuits' neutral wires have been bridged together at some point. Current from that circuit returning on this circuit's neutral will cause a trip.

Lastly, it's not impossible for a GFCI to fail outright. I strongly discourage people from thinking in those terms, because experience has shown most people will instantly leap to that conclusion: a version of "shoot the messenger". I am glad you are not vulnerable to that.

It wouldn't hurt to buy a second GFCI breaker with an aim to fit it on a second circuit, and use it to test this circuit before assigning it that task.

Your GFCI circuit breaker is behaving normally, and you observations confirm that. An inductive load switching on or off, such as a motor (the compressor motor of an air conditioner or refrigerator, or bath exhaust fan), can trip a GFCI breaker. It might also be tripping because of water entering the outside outlet, or an appliance onnected to it, i.e. an actual ground fault current, where it is helping to pevent a dangerous shock.

There are a few remedies:

DrMoishe's answer is correct, but I thought I would add a little bit of context. The purpose of a GFCI is to compare the incoming current to the returning current. If these are not the same, the difference is going somewhere else, possibly through an object (or person!) to ground. When the GFCI detects this condition, it interrupts the circuit to stop the current.

Your little tester gizmo is working properly, and so is your GFCI breaker. The tester diverts a very small amount of current into the ground circuit (the round hole in the outlet) in order to cause the GFCI to detect a mismatch and break the circuit.

Many times you will see GFCIs co-located with an outlet; these are the outlets with the test and reset buttons. Any outlets located downstream from a GFCI will also be protected. In your case, the GFCI is part of the circuit breaker in your electrical panel, which you noted has its own test button. Every outlet on that circuit should be protected.

It's okay to use your tester on any outlet in the house. Unprotected outlets will continue to operate when the test current is diverted. This tells you they are not protected. To check the protected circuit, you can use your toy or simply press the test button on the breaker itself. Both methods do exactly the same thing.

If your breaker is randomly tripping, it could mean one of two things: (1) A short to ground is tripping the GFCI, or (2) a current load greater than 15A is tripping the breaker. As DrMoishe says, anything with a motor can cause a temporary current spike that might trip the breaker. Try to find out exactly what appliances are running on that circuit, and whether they might be misbehaving or starting at unexpected times. Good luck!

Not the answer you're looking for? Browse other questions tagged wiring bathroom circuit-breaker gfci outdoor or ask your own question.

2
GFCI breaker trips, but GFCI outlet does not?
1
Circuit tester trips new GFCI
2
Outlets not working, no GFCI issues, breaker problem?
2
GFCI Outlet Trips with Receptacle TEST Button, but not with GFCI Outlet Tester Tool
1
20amp afci breaker with gfci outlet tripping under 15amp load, but not lower loads
2
Are my GFCI outlets tripping each other?
3
What happens when using a GFCI Tester on a non-GFCI outlet?
0
Do I have a Bad GFCI Circuit Breaker?
13
GFCI Breaker - Good or Bad?