How can I shorten ABS pipe to move a drain trap?

What’s the right way to shorten an abs pipe. I’d like to move my basement sink over 3 inches to make room for a wall.

Should I simply cut a chunk out of the Horizontal pipe and join the ends with a coupler ? 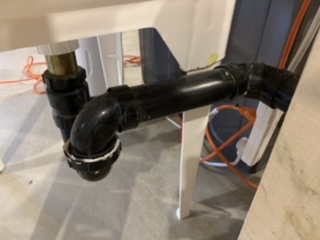 If the union on the trap can be loosened so the sink end of the trap can be swung on an arc, then you could cut out a piece in the horizontal section and reconnect with a rubber connector which would allow axial rotation and would allow some in and out repositioning to properly line up all the parts for a leak free drain. If the union on the trap is cemented (which it is NOT supposed to be), then I think you would have to redo much of the drain to get it properly positioned if you move it. If the white on the union is just joint compound, then it could just be wiped off. A union does not need any joint compound and certainly is not to be cemented.

Normally in the horizontal section there would be a slip joint with smaller tubing from the sink fitting inside slightly larger tubing going into the wall. This allows axial rotation and in-and-out translation needed to properly mate all parts.

EDIT See this video https://youtu.be/hzLqWu4DNO0. The teflon tape is strictly not necessary because the sealing of the slip joints is done by the plastic seals. But this video shows all the elements necessary to have a drain in which all the parts can be in the correct positions and angles. Also in the video the narrator incorrectly calls a slip joint a "union". The only union in the drain is on the wall side of the trap. There are two faces which are held together with a nut and there is no separate seal needed.

Why do you need a coupler?

I would undo the u bend outlet, shorten and re tighten.

That's about all there is to it.

Make sure you get an ABS coupling and the appropriate glue. PVC pipe glue won't work properly, and you don't want to mix ABS and PVC pipe pieces.

Not the answer you're looking for? Browse other questions tagged plumbing basement drain sink abs or ask your own question.

7
Connecting a P-trap to a female drain connector in the wall
0
How to fix leak in ABS pipe going into cement
1
Can I move this drain line from the wall to the floor?
1
How to move utility sink and extend trap / drain pipe under it?
3
Can I tie a vanity sink drain into the bathtub drain?
2
Can a sink drain be on the low side of a p-trap
0
New vanity doesn't leave room for old J trap - how should I run the new pipe?
1
Fernco coupling to join ABS drain pipes under basement?
1
PVC to ABS Recommendations
10
How can I temporarily repair a lengthwise crack in an ABS drain pipe?