I need help validating my clothesline design. It'll be on our deck for convenience (I don't want to lug a heavy basket of wet laundry down to the backyard). I want it to be collapsible so we can hide it if we ever have guests again. And, if we have to sell the house to someone who doesn't appreciate clotheslines, we'll just unscrew the hinges and take the whole thing down with minimal damage to the railings. 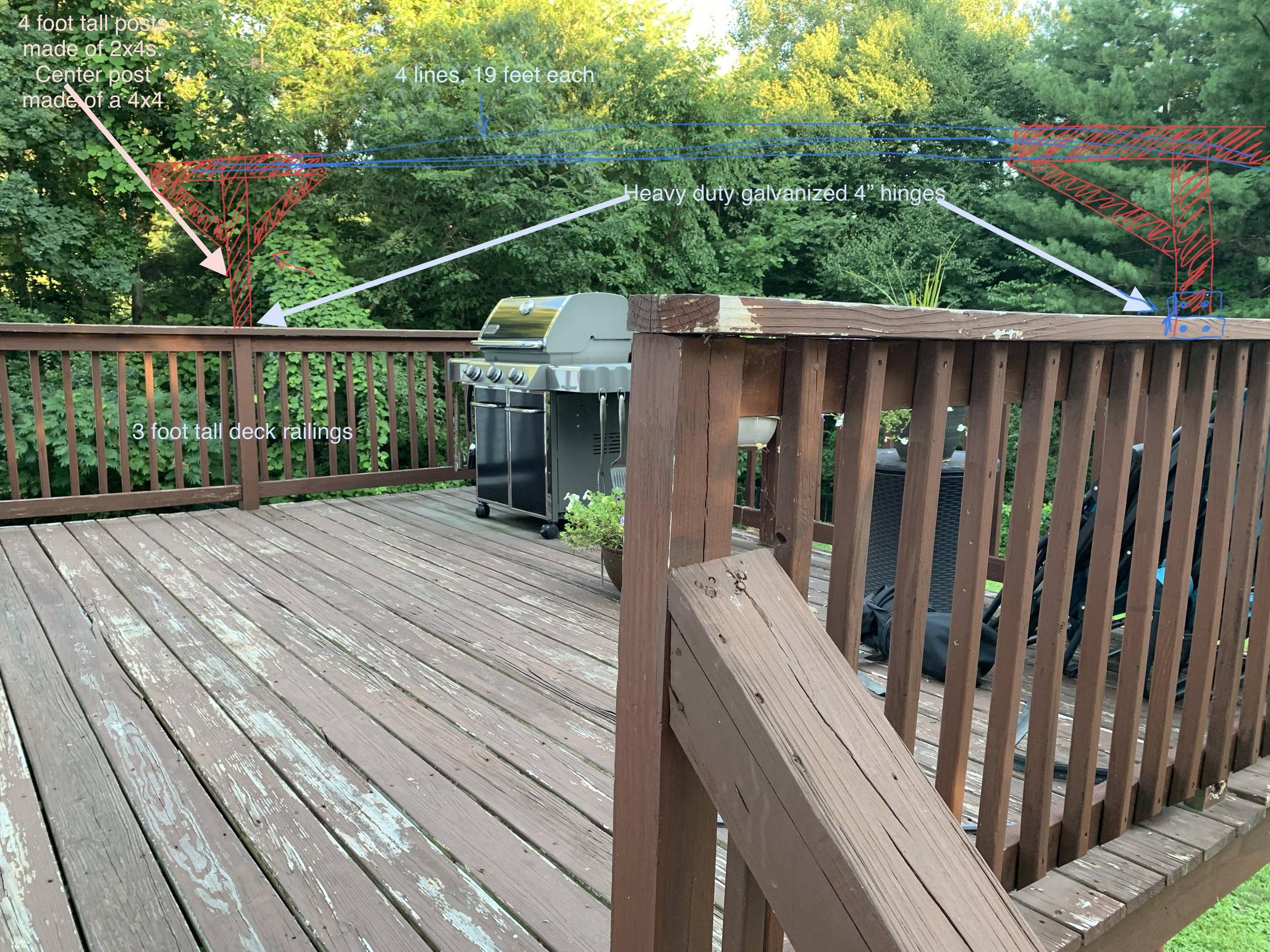 My questions are specifically about the stability of this design. I'm only expecting less than 15 lbs of load, consisting of 2 king-size sheets and up to 2 bath towels, so maybe I'm overthinking this, but better safe than sorry. By which I mean, better to ask now and look like the beginner that I am, than spend 5 hours putting it together and have it sag or bend or fall apart 😬

In my mind, these are the Bad Things™ that can happen:

So, what do you think? Are there other glaring design flaws I'm not thinking of?

Thanks all in advance!

EDIT Aug 2, 2020: Some people have suggested some intriguing ideas, including a prop in the middle of the line and a telescoping post. I am interested in all those ideas, but could you please include some details on the materials and hardware I need to implement them? I am a DIY beginner, and this project is apparently far more demanding, engineering-wise, than I'd estimated. Who knew hanging 13 lbs of sheets to dry would be this complicated?

Also, the 13 lbs estimate is from Googling the weights of the sheets and towels, cotton absorbency and washer spin cycle water extraction rates. I am aware that wet laundry weighs more than dry laundry. 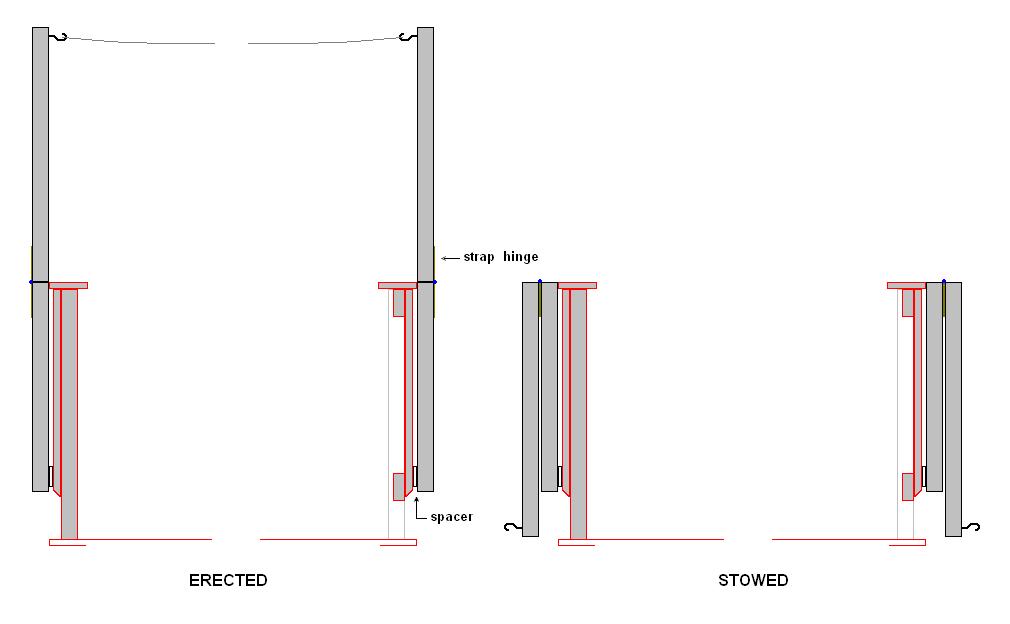 This spreads the torsional load over the entire banister railing instead of stressing only the cap or top rail.

If there's any bending at the hinge, or other distortion, it will be confined to the added pieces and will leave your existing railing unaffected.

Just one detail: the horizontal force does not need to be tremendous and you can in fact adjust/limit it.

Of course, you "pay" for this low horizontal force by needing a higher pole (which also means more leverage).

As a back-of-the-envelope estimation (image below) I put 1 m of railing plus 1 m post at a distance of 5.7 m, accepting the clothesline to sag 1 m, i.e. down to the railing. That would put the "working height" between 1 m (like a standing clothesline) to 2 m which should be doable. The resulting maximum angle for "symmetric load" would result in a 70° angle which gives us Fh ≈ 3 Fv with the clothesline length being 1.06 ⋅ the distance between the posts (so an additional 35 cm ≈ 14"), the momentum at the joint between lower/upper part of the railing would be 150 Nm (i.e. the vertical equvalent of hanging 15 kg at a lever of 1 m length) - which should be well within the capabilities of many hinges. And a railing should certainly be able to withold this horizontal leverage - though the torsion on the cap rail may still be too high in your initial design.

Hanging clothes throughout the full length of the clothesline would ease the inward force since it causes a smaller α right at the post and a more flat clothesline in the middle.

Alternative: Clothesline outside the railings

You could also consider putting a permanent clothesline (blue) outside the railings (black): 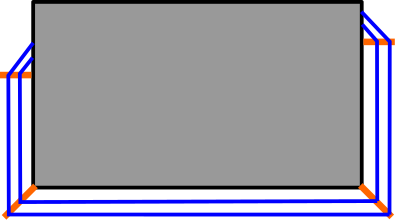 Such a construction with the lines anchored to railing posts easily allows a whole lot of tension (so not much sagging) since the horizontal forces are quite nicely countered.

the clothes-line with 6 inches of droop over 10 feet of span multiplies the weight of the clothes by about 20 to get the tension in the rope.

Your hinges need to withstand 50x20x12 pounds in tension 12000 pounds, without using steel and posts with welded hinges that's not going to happen.

I'd go with telescoping instead of folding, 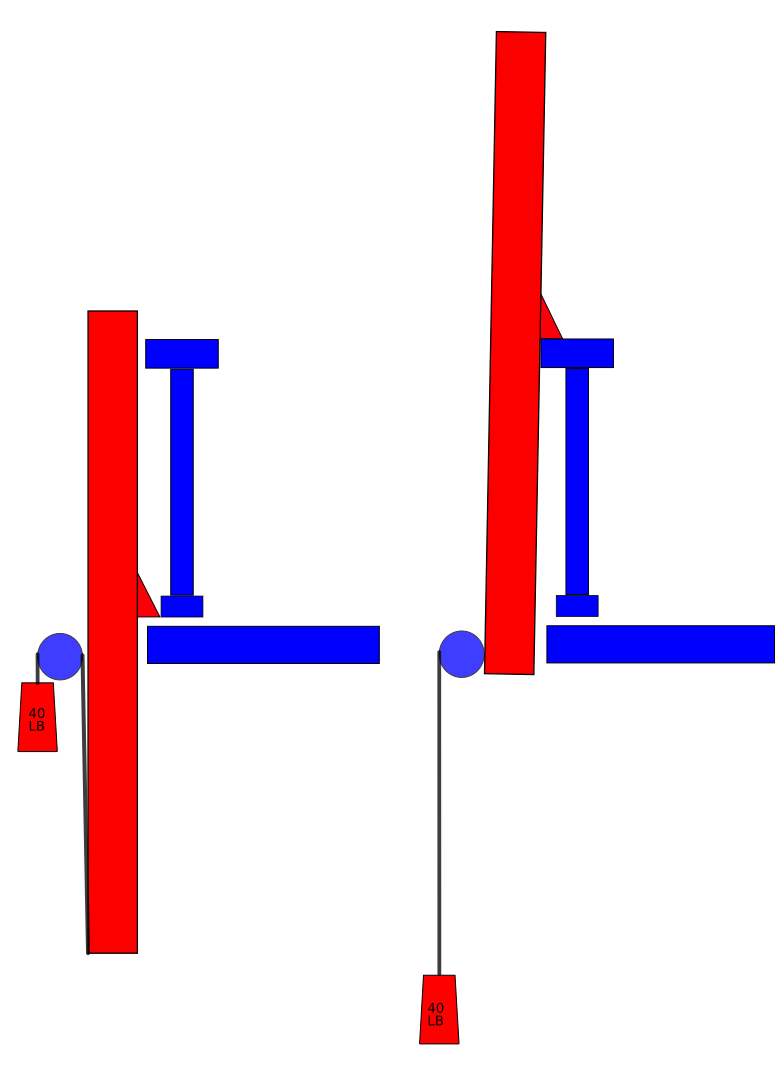 the triangle is to hold the post up in its high position. the circle stops the post from tipping inwards (the rope will stop it from tipping outwardsm, or to could add another bracket)

The circle could also be a wheel could have a rope around it to the bottom of the post for a counterweight to make the post easier to lift.

What are you going to use as an upright member on the posts? I would do it with a 4x4 because it would add some stability when resting on top of the rail while in use. Your laundry is going to want to pull the posts in toward each other. That will put a lot of strain on the hinges, which themselves are probably fine, but will be pulling on the screws and the rails very hard. In fact, the rails may twist on you so I would also put another vertical post under the rail on the near side one and use a "strap hinge" that would go down into both posts. 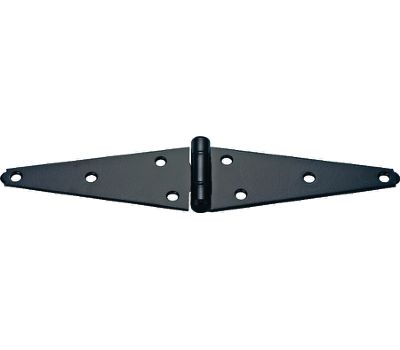 1
Do deck footings need to be spaced evenly?
1
Installing pull-up bars. Will this design hold?
3
Is there code compliant way to attach deck joists below a deck beam (or at least lower than flush with the top of the beam)?
2
How to raise sinking deck post
1
Where should I put the railing post in my deck design?
3
How can I eliminate wobble in my surface-mounted deck railing posts?