Should old knob and tube wiring be replaced?

I have been doing some electrical work in my house and I noticed it has old knob and tube wiring that is still hot, should this be replaced as found or is it fine to just leave it? It seems really old and brittle, so I'm a little concerned.

The advice my family once got from an electrician on this question was that if you have low amperage service and NEVER touch it, you're probably okay. If you have regular electrical service or touch the circuits at all, remove ALL of it. His basic theory was that if you keep the wires cool, and they haven't caused you trouble yet, it's unlikely to cause a problem. Granted that advice was about 15 years ago and none of that wiring is improving with age.

Once you touch the lines at all, rip it all out. It's very likely that you will introduce a problem between the coating and the wire. The house we were dealing with went another 10 years before we needed to rewire one of the old circuits. Once that happened we rewired the entire house all at once.

If you're concerned at all, turn off the affected circuits, and get rid of it. Better safe than sorry on this one.

Generally, it is a good idea to replace it, especially if you can easily access it. One thing you don't want to do, is replace part of a circuit. Then the next guy might see the new romex and make some assumptions about the rest of the wiring. The other time you really really should replace it is if it runs through insulation, especially blown-in cellulose. That is a serious fire hazard. Knob and tube was designed to use open space as an insulator.

Myths abound about K&T, and lots of it is ripped out unnecessarily.

The K&T wire is exactly as thick as modern wire, and was installed by skilled craftsmen using bulletproof soldered joints rather than plastic wire nuts. The ceramic tubes will outlast civilizations. With certain important exceptions your K&T will outlast the house itself, unlike modern wire.

K&T is more heat resistant than the equivalent modern wire, because the conductors are separated by an air gap. The ceramic tubes mean that even if the insulation deteriorates it creates no fire hazard. And in fact, if you check fire statistics you'll find K&T wiring is as, or more, safe than modern wiring. Hammered nails or screws can create subtle shorts and sparks in modern wire, but have little to no effect even if they pierce K&T wires. Poor installation is more common on modern wire, compared to K&T which was installed only by guild trained electricians.

From Home Energy Magazine 'Knob and Tube Not a Fire Hazard':

Legislation was enacted in Washington state to allow insulating over knob-and-tube wiring per Bonneville Power Administration (BPA) specifications. This resulted because there were no documented cases of a fire being caused by knob-and-tube wiring, whether insulation covered it or not.

Leaving light fixtures on K&T is especially practical, as grounding matters much less, and these are typically the hardest runs to replace.

That said, much K&T wiring is either overloaded by modern uses, or has been hacked to death by bad renovation. Our jurisdiction (Berkeley, CA) requires an inspection by a licensed electrician prior to insulating over Knob & Tube (see here).

It is important to check: 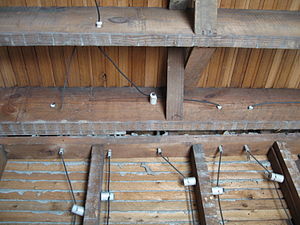 The danger with K&T is that somebody messed with it. Here's a picture of a pretty typical example. Someone jacked a new circuit in. They cut the old knob & tube short, destroyed the original insulation, did a hack tape job, then installed a modern metallic cable almost touching that mess. This particular instance created a big spark some years later as the grounded metal cable hit the now bare wire. Original K&T installers never let the wires touch except protected by ceramic tubes. 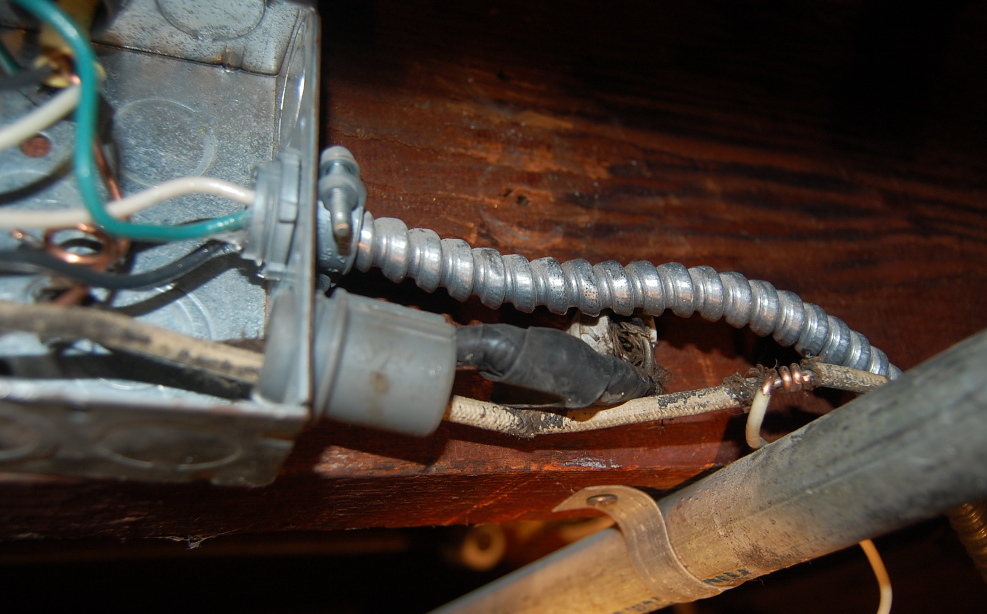 Insurance was no problem: No company cared (I ended up getting it from Travelers, via GEICO). So, I wouldn't let the insurance stories scare you until you pick up the phone and ask. What they do care about is the type of Circuit Breakers you have. The modern ones that look like switches, or the old wire ones (that burn). That may be an issue if you have the old plugs.

Recommendation: It might be a problem with putting things "on paper" vs. verbally, but I interviewed many electricians and 3 permit employees (since I was remodeling the kitchen and "touched' some of the old K&T). My experience is that most of them, when not motivated to just make money out of you, say that K&T is just fine, there are plenty of old houses with it and you don't really see houses go up in flames around you do you? and when fire happens on the news, when did you hear that it was blamed on old K&T system (most likely you hear it was a heater or candles)

my personal conclusion, if it is not broken, don't fix it. do it only if you are doing some other thing which justifies the work.

A big problem with K&T is the horizontal runs - sagging over time means stress on the insulation, which becomes brittle from oxidation (not the wire - the rubber insulation), and can break off. You then have (a) bare wire(s). Should those wires come in contact with horizontal piping - particularly after something like a renovation, which usually redistributes loads and causes fresh settling - you have a recipe for a short and a fire. This exact thing happened to a balloon framed Victorian (vint. 1898) in RI, causing a fire on the third floor. Fortunately, the smoke was spotted by a passerby who came in, woke the occupants, and saved their lives. The water damage was extensive, and the cost to restore with matching full dimension lumber, lath/horsehair/grey coat and finish plaster was very high. A beautiful Italianate Victorian was nearly lost to history but for the passerby. All K&T was replaced, and worth doing.

Note that a proper K&T installation added tubes at the point of crossing a pipe or another wire. Probably the pipe was added later in the fire above: 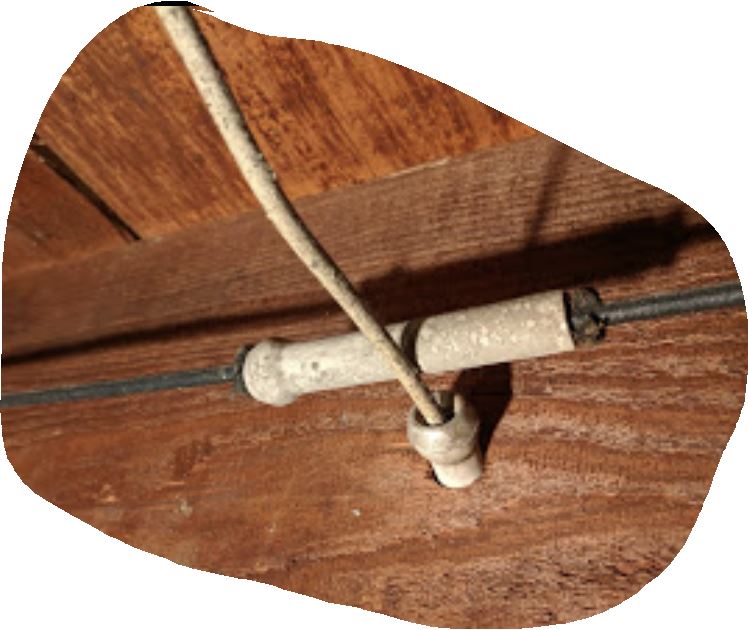 As foreman for a licensed bonded electrician, in San Francisco CA, ca 1980's... K&T wiring was NEC code approved.... and approved by the more stringent local city code... that said I code rewired a lot of Victorian houses, w/ K&T as the original wiring... it could be Western Union, solder-spliced, to repair or extend it... very tedious... and needed to add supporting knobs for those 'code splices'...

biggest issue was inside ceiling fixtures.... where the old TW wire's 'asphalt' insulation became brittle due to fixture heat... and the slightest bending often cracked the insulation... usually requiring replacing that lead back to a supported splice... very tedious... if inexperienced persons had changed the fixture insulation was usually cracked...

you could still buy knobs, and loom sheathing ATT.... but not tubes, nor the metal wedges, to lock the TW wire and loom sheath, as it enters the old metal box....which could necessitate replacing the old junction box, w/ a new one that had built in wire clamps or would accept standard connectors.... and carefully setting those connectors..... I learned to salvage the wedges, and tubes, for reuse when had to...

In all, after a couple tedious years dealing with old K&T circuits, I decided it best just tear it out in a rewire... and replaced it w/ new boxes and wire runs..romex or EMT runs... It was usually more efficient, and the customer had a better product in the end.... Only in rare cases would I work w/ it to preserve the original finish, of the ceiling escutcheons, in the old Victorian homes.... and code still required cutting and capping off the old supporting gaslight pipes, if still connected and live....

I'll take romex, or THHN in pipe, if I have a choice... lot easier to work with... I became adept at 'fishing' romex, and the tricks of cutting lathe and plaster...

Yes definitely. In some spots, knob and tube is a deal breaker for a house sale and must be replaced before the house is sold. It's fairly dangerous to have around, even more so if it's brittle. I'd hire an electrician if you're not comfortable replacing it all yourself.

K&T wire was the only wiring method used in the 1st part of the 20th century. Houses had lights and radios. Maybe a house had a toaster. After many years of heat build up and over use, any wire will degrade and its ampacity will diminish. Today, we ask an 80 year old wire to run things that require more then the century old wire can deliver. Would you ask an 80 year old car to take you to Florida from Ohio while pulling a trailer? Of course you wouldn't That is exactly what we are asking an old electrical system to do. Nothing lasts forever. It is a safety issue and so in my opinion, after 30 years in the electrical business this is what I would suggest. Replace that old overused outdated wire before you spend money on the pretty kitchen.

Yes K&T is ancient wiring and in some locations it is pretty safe. I have even seen some of it on MASH 4077 where wires are run in pairs and held by cleats.

As mentioned elsewhere, there are NO grounds and it could be possible since there is no color code like "black for HOT or UNGROUNDED CONDUCTORS" "WHITE FOR GROUNDED" to put in a new circuit and share a neutral and this could be "VERY BAD" as the neutral could be overloaded and start a fire. If the Neutral is 12ga wire (which is good for a 20 amp circuit) that is fine, BUT if you share said neutral with another circuit because the neutral for the new circuit got broke or is not accessible than the 1st neutral could be carrying a lot more current. The fuse for the new circuit will not "blow" if its ampacity is not reached but it will if the return is through a 'loaded neutral from another circuit.

The best way to tell is to get a rubber lightbulb socket with 20 or 30 foot ends with crocodile ends. Put one end on water pipe or known ground and touch the other end to the wires; if the lamp lights, the wire is a "HOT" wire, then the wire running along side by a few inches would most likely be a ground but you could take lamp test wire and put to a "known "hot wire and using other lamp wire touch to ground then spray paint the wire with the ground connection white.

Not the answer you're looking for? Browse other questions tagged electrical fire-hazard knob-and-tube or ask your own question.