Are there any safety issues with this breaker box?

Please point out any safety issues with this breaker box in my shop. 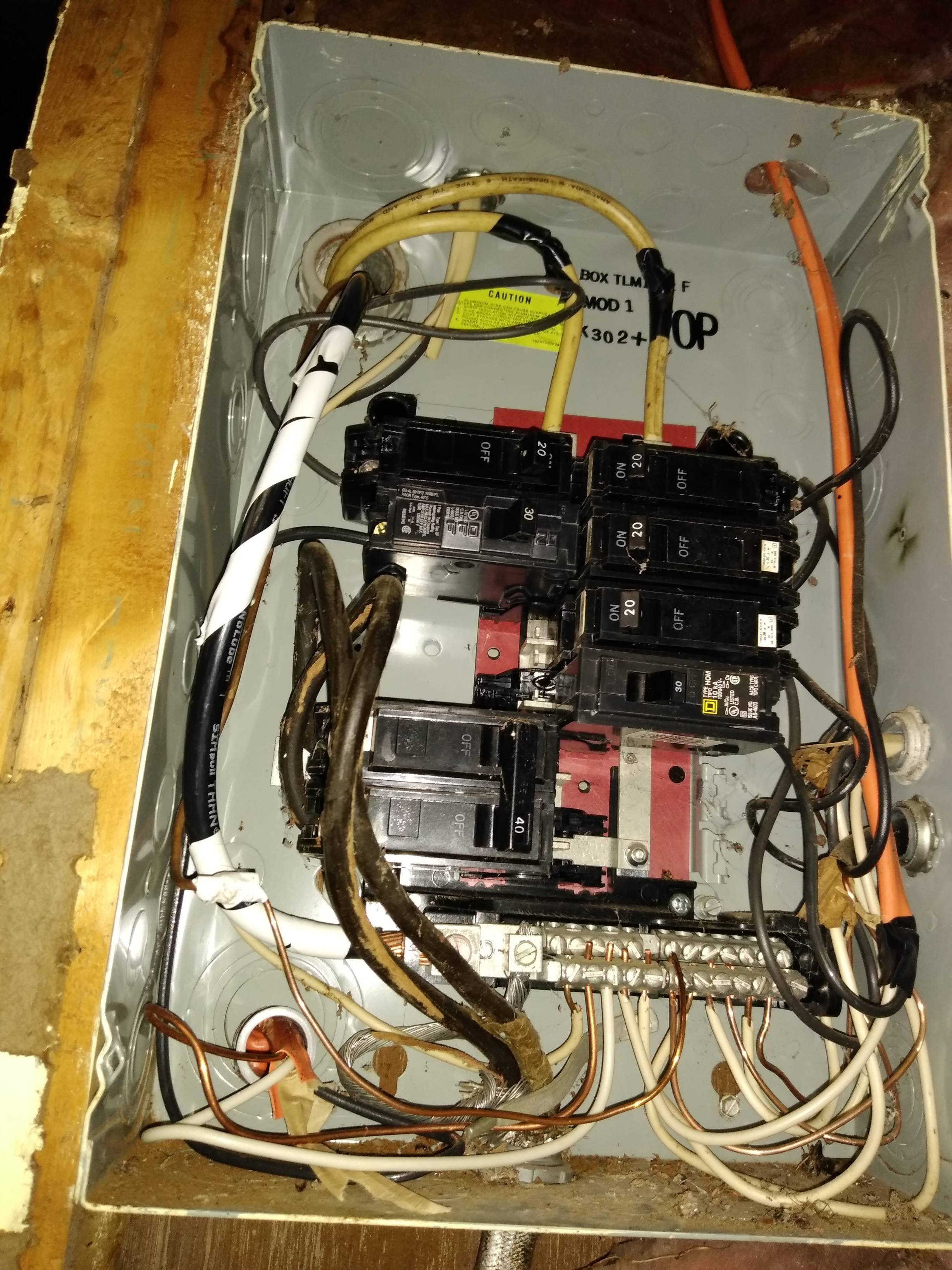 Criticize away I would like my shop to be safe.. not having any problems presently

Second area of interest.. the power is coming from a splice off the main service AFTER the meter but before the main panel for my house .. all three service cables are done in this manner which should mean that they are not connected at the main box and serve as their own service I believe.

Don't get me started on the main panel it is an ungrounded fuse box, but the main circuits have a similar breaker box and splice and drop due to a previous addition.. I've had no problems with it..

Let's start with the shop.. if I need an electrician I'll hire one I already had one come out and he didn't seem too concerned with the way it was but he is 71 and said they used to do this all the time.

Your first order of business is to clean this mess of a panel up, and that's a two-pronged job. First off, you need to remove the existing breaker from the top left and fit a THQL2160 main breaker with a THQLRK1 retainer kit there, then, with the utility having cut power at the meter, move the existing hot wires to the new backfed main breaker.

Once that's addressed, and the service barriers that come with the retainer kit fitted, we can then move on to cleaning up the alien breakers that have infested this panel. Each and every breaker in this panel that isn't either a GE THQL or an Eaton CL will need to be replaced with its THQL counterpart (same poles, same amp rating).

Your RV outlet needs a grounding wire run from it to this panel, no questions asked, as that ground rod is doing nothing for you in terms of protecting you from wayward utility power. Given that this is a shop/shed space, and there's a ground rod at the RV outlet already, I'd just run a #8 Bare Armored Ground cable from the RV outlet box, into the wall, and onward to the breaker box, extending the wire inside to terminate on the bar there, provided the RV box is on a wall of the shed and not on a post outside.

Adding to another answer:

Looks like the neutral is quite a bit larger than the feeders. When I see that I think they just wired it with "stuff they had laying around".

There are specific rules about "taps" (NEC 240.2): Tap runs of 10' or less must be enclosed in a raceway, have an ampacity of at least 10% of the circuit it's attached to and terminate with an over-current protection device appropriately sized for the feeder wires. I'm not sure how this applies when there is no real rating for the supply circuit (from the meter, if I read the OP post correctly).

At a minimum the OP needs better overcurrent protection for that panel. He has space, so he could simply get an appropriately rated 240 volt breaker and backfeed it to supply the panel, then it would become his main breaker and comply with overcurrent protection. Unfortunately, that probably means pulling the meter to shut of power, given the way it's connected. And depending upon the POCO, it may lead to pulling a permit, and inspections, maybe bringing more and more stuff up to current code. Could snowball.

Do you planning first. Check if the POCO will pull and put back your meter so you could add a main breaker without involving a permit or inspections, etc. If so, that would be my first priority to make it safer. That would be a baby step. If you really have an ungrounded, fuse type main panel, it might make more sense to take a more holistic approach for your upgrades, could be less expensive and much better outcome in the long run rather than doing it piecemeal.

A ground rod is no substitute for a ground wire. They do completely different jobs. The RV branch needs a ground wire in addition to the ground rod. Since the cable is orange, clearly it was manufactured with a ground wire in it; that will have to be restored by either putting it to good use, or replacing the defective parts of the cable if it is unuseable.

The orange cable needs a cable clamp fitted. You'll need to pull the cable through it, so that'll be a good time to fix the ground issue.

I'm not worried about the neutral wire being bigger; bigger is always allowed, and going to #4 or larger allows remarking a black wire to be a neutral, which is a clever hack. What greatly concerns me is that the wire run is completely unfused. You need to either feed this from the main panel, or change the meter to a "meter-main" with a few auxiliary breaker spaces, and fit a 60A(?) breaker in the auxiliary spaces to power this sub. (breaker amperage as appropriate for hot wires; in some cases 70A is OK for #6). I would fit the meter-main first; that way you can de-energize your various panels. That'll make them a lot easier to work on.

The dog's breakfast of alien (Square D, Siemens) breakers need to be changed for ones correct for the panel bus bars. Continued use of alien breakers may result in bus stabs being burned up and possible fire.

Double-tapped grounds are usually OK if the panel labeling permits that.

2
Can a main breaker box be bonded at the meter box?
7
Can cold bond be connected to ground rod?
2
What's the goo on the ground cable in my breaker box?
0
Ground wires: Do I have this right?
3
Is there any issue with the neutral and ground being connected in this panel?
1
How should a sub panel be grounded if next to the main breaker?
2
Ground wire arcing in breaker box
1
Neutral size in breaker box