How could I flatten these warped sleepers layed on uneven concrete to an acceptable level?

The concrete in my basement is, as most concrete is, very uneven. I was building up my subfloor to match an existing floor, so I got about 200 board feet of PT 4x4 and ripped 1/2" off using a table saw followed by a planer. Then they kinda sat for a month while I trecked across the trans-Canada railway. Anywho, the combined effect of the planing and the sitting was warpage. I put anchors in the concrete and tightened them down real good to flatten them, but some pieces are really far gone, where some of them snugged right up.

Here's a photo of how it is right now: 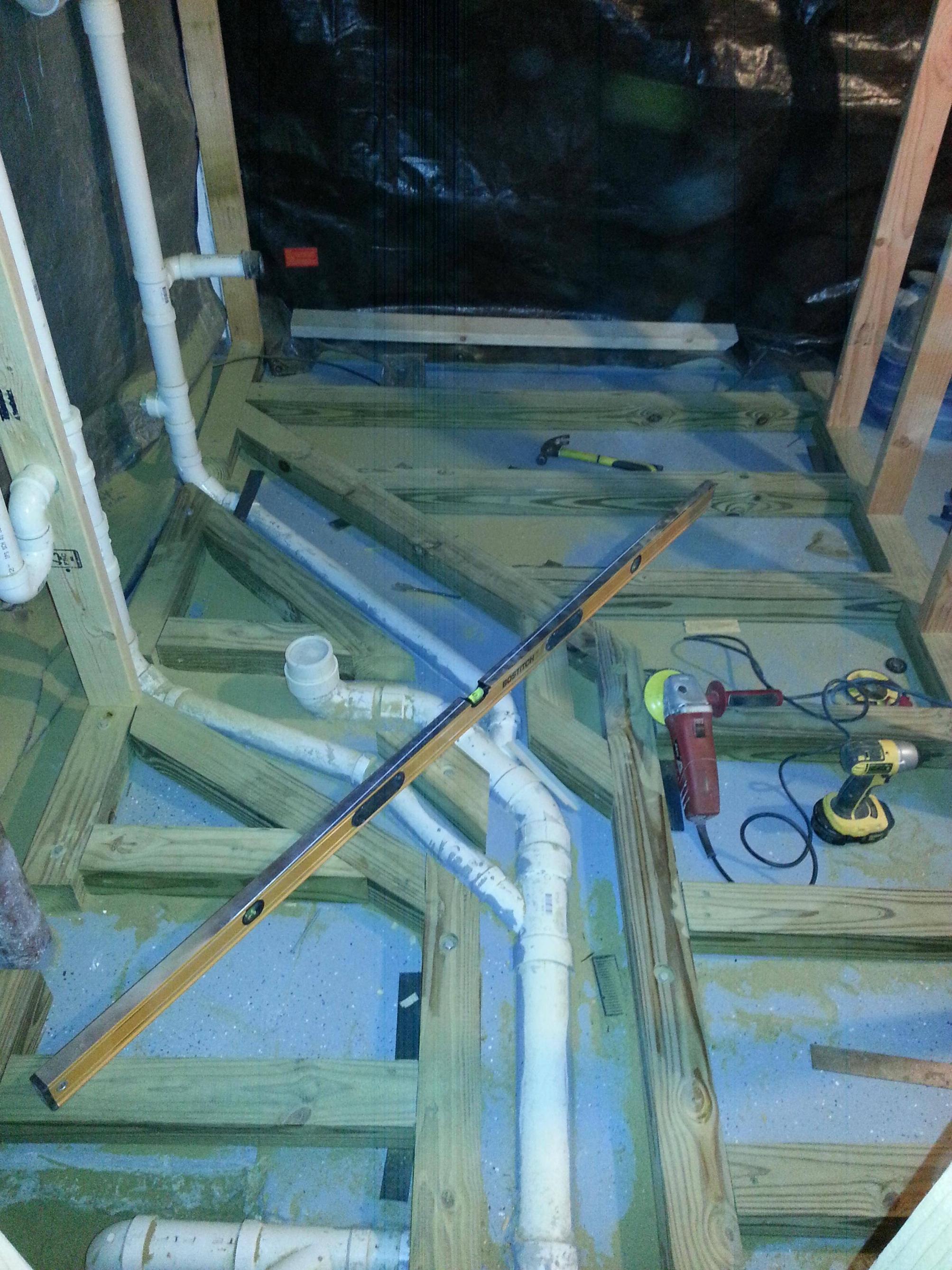 It has a lot of high corners because of the warpage, and I sanded a good bit down with my angle grinder and some 36 grit.

Every time I move the level though it seems like something else is too high or too low. It's been hours of back and forth and it's starting to seem impossible to make this flat. The floor isn't actually level, it's 2-3 degrees tilted outwards, but flat is what matters to me. I'm starting to think if I put the plywood down that things just might go well, although at some points the plywood seems like it would be resting on the edge of the 4x3's because of the warpage.

Is there a reasonable tolerance that I should abide by in making these flat? Is there a better way? Is it ok if not the whole sleeper is in contact with the floor board? (bonus points: my framing down there looks structurally sound enough, right?!)

(and because I know somebody will call me out on it, there's no plastic under there but the epoxy coat I have down there is one of the moisture barrier variety, and I also put PT on to just to be safe - I know already! I know!)

Perhaps you're thinking about this in the wrong order.

What if you applied the plywood to the almost level sleepers and then leveled a surface over the ply?

I think you''re going to have a very difficult time leveling sleepers as you have in that photo.

EDIT: Per your comment that you intend to install tile atop ditra.... you have a very forgiving tolerance with the subfloor, then! Glue and screw the ply into the sleepers. Then apply the Ditra. You can level out imperfections in the leveling with thinset below the tile depending on just how bad things are.

You could try a plane as a tool for shaving down the high spots. A good quality plane with a sharp blade can remove a lot of wood in a short time.

I do wonder though....if you get them all honed down to a satisfactory "flat" will they stay that way? Seems like they could warp more.

I also see a small problem with how you have laid out the wooden members on the floor. You have pieces going up to the studded wall at 90 degrees. When you come to lay the floor there is no support for the floor edge at the wall between these 90 degree pieces. It is recommended to have all edges supported.

In regular house construction the joists go in first, then the plywood subfloor comes next and then after that bottom plates and studs are installed.

A belt sander can take off a lot of material fairly easily. But be careful, for the same reason.

As to level, knock down the ridges and check again. Use a long level (at least 4'). If there are significant irregularities after shaving the ridges, you can tack down shims in the gap spaces. Dry fit the plywood and test for rocking or springing. If you find some, lift and add/move shims. When it seems solid, nail and glue the shims, then glue and screw the plywood.

Instead of a wooden subfloor, you could fill it with self-leveling concrete.

Of course, you could also dig up the existing concrete and lay all the new plumbing in the ground under a new concrete floor, which is, I believe, the best method if not the easiest or cheapest.

Not the answer you're looking for? Browse other questions tagged concrete basement level or ask your own question.