Why did my GFCI by my kitchen sink burn up?

My wife and I were sitting at the kitchen table and heard about 10 seconds of buzzing, then smoke came out of the GFCI next to the kitchen sink. Nothing was plugged into the outlet, and the only thing on was the dishwasher, which after inspection was sharing a neutral with this outlet, but the dishwashers hot was on another circuit. The breaker did not trip either. The receptacle is about 2 feet to the left of the sink and about 8 inches up from the counter. Here a picture of the damage: 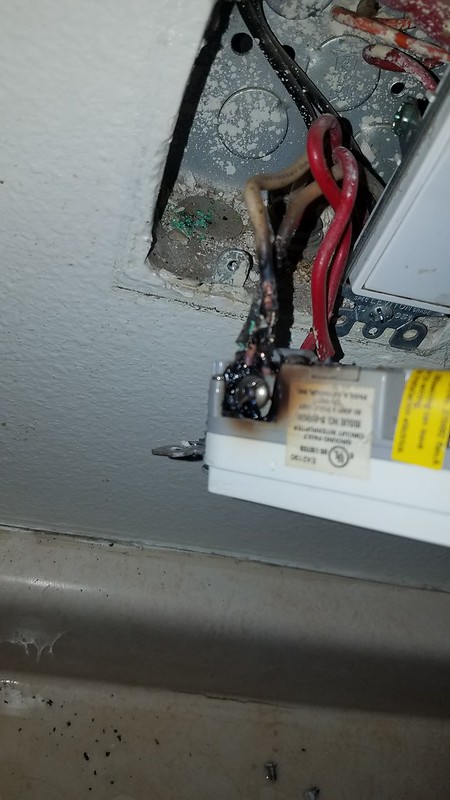 I called an electrician neighbor and he spent a long time with me trying to figure out what happened. We took out all the receptacles in the kitchen and tried to make a circuit diagram. I drew it out after he left and I apologize for anything that is not correct, but here's what I got: 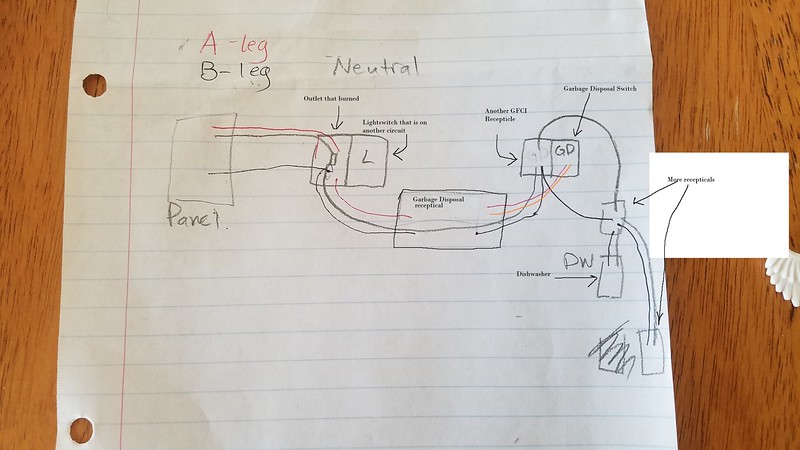 So the receptacle in question is a split, where the neutral is shared with a circuit on the other leg in the house. Since neither breaker tripped, they were both replaced as a precaution and tied together. I also replaced the GFCI outlet on the other side of the sink that is sharing the neutral wire.

I couldn't even find anything else on the same circuit as the one that burned, just the one receptacle. I replaced it with a non GFCI outlet, as I didn't have another one on hand. I guess I'll need to pick up another one and swap it out. I did add a pigtail to both the neutral and the hot lines for that outlet, but everything else I left the same.

The insulation on the wire seemed good (after the burned part), so I trimmed the wire back and used it. The electrician said that the outlet must have just gone bad.

Everything is hooked up and working right now, but I'd love some insight. It's hard when you don't have confidence your house won't start on fire while your sleeping.

First, if you replace breakers as a precaution, be VERY careful to get the correct breaker for your panel (even if the last guy didn't). I am concerned that a non-necessary breaker swap could result in a correct (say: Murray) breaker being swapped for an incorrect (say: HOMeline) breaker, which would then cause other bus arcing problems later.

Also it's vital to use factory provided handle ties, not a sawn off nail, because the proper ties force the phases to be opposite.

Now you have a multi-wire branch circuit in which someone did a big naughty. They used the neutral terminals on the device as a way to splice the supply neutral to the onward-power neutral (and also supply the device obviously). That's not allowed; the neutral must always be pigtailed anywhere both hots are present. That is so a device can be removed without knocking out power to the other half of the circuit.

Since you're supposed to pigtail anyway, and you need a GFCI there, and the screw terminal looks serviceable in traditional mode... you should pigtail this neutral and attach the pigtail to the old GFCI "the old fashioned way" so you have GFCI protection again.

Improper torquing of the screw-and-clamp connection

In this arrangement, the screw clamps the one or two wires placed under the screw. If the screw is not tightened to the correct torque, a poor connection will result in overheating, possible arcing, and exactly the damage you see.

Because of this, Code was amended in 2014? 2017? to require use of a torque screwdriver to set all torques.

Where was the current coming from to do this damage? One of the various devices or outlets that flows onward from this location - note that all the MWBC's neutral current comes right through here.

Current travels in loops, so any current going out a "hot" must come back a "neutral". Now if the MWBC is properly phased, some of the A-leg's current will travel down neutral to a B-leg load, and then return via that B-leg (so a bigger loop, with 2 loads in it). The neutral in a proper MWBC never carries more current than a hot.

Misplacement of the breakers, resulting in overload of the neutral

This is the problem with individual (or duplex) breakers used for an MWBC. If both breakers are on the same "leg" of power, the neutral handles all the return current for both hots, added together - so up to 40A of current. Now, 15-20A receptacles are required to have 20A internal through-busing, but obviously not 40A - so this is likely to burn up the internal busing that connects the two terminals that you're not supposed to use as a splice.

This is why MWBCs require at the least, two breakers with a factory handle-tie (which forces them to be on opposite legs) -- and at the most, a 2-pole 240V breaker.

This is especially vexing in GE panels, where it is very easy to mis-phase their double-stuffed 1/2" wide breakers. In a GE panel, consider it mandatory to use a 2-pole breaker, and don't force it into a space it doesn't want to go into!

16
Why would a GFCI trip on refrigerator circuit?
4
How do I replace two split receptacles with GFCI receptacles?
0
Is this GFCI shot?
2
Will GFCI curcuit breaker operate properly with neutral pigtail wire not connected?
1
Kitchen wiring issue
1
Why does this kitchen receptacle located on the far side, away from the sink, need to be GFCI?
0
GFCI Receptacle Circuit Test Differences with Klein RT310
0
I replaced a receptacle above the kitchen sink with GFCI. Should I also replace the one above my stove?
0
Adding GFCI to existing 5 wire GFCI
0
Replacing a switch from switched outlet with duplex receptacle