Can I install required breaker in my electrical panel?

GOAL: installing an external 240v wall outlet to power a future air compressor. I have attached a picture of the electrical panel in my house. I would like to understand what I am looking at in the panel. I do not know how to find the main breaker to stop the feed of current/voltage to this panel. Lastly, do I even have room to install a breaker that is suitable for a 240v air compressor. I am happy to be here and learning from everyone, first question asked, so please correct me in any way and school me up. I am thirsty so if you have time just lead me to the water! 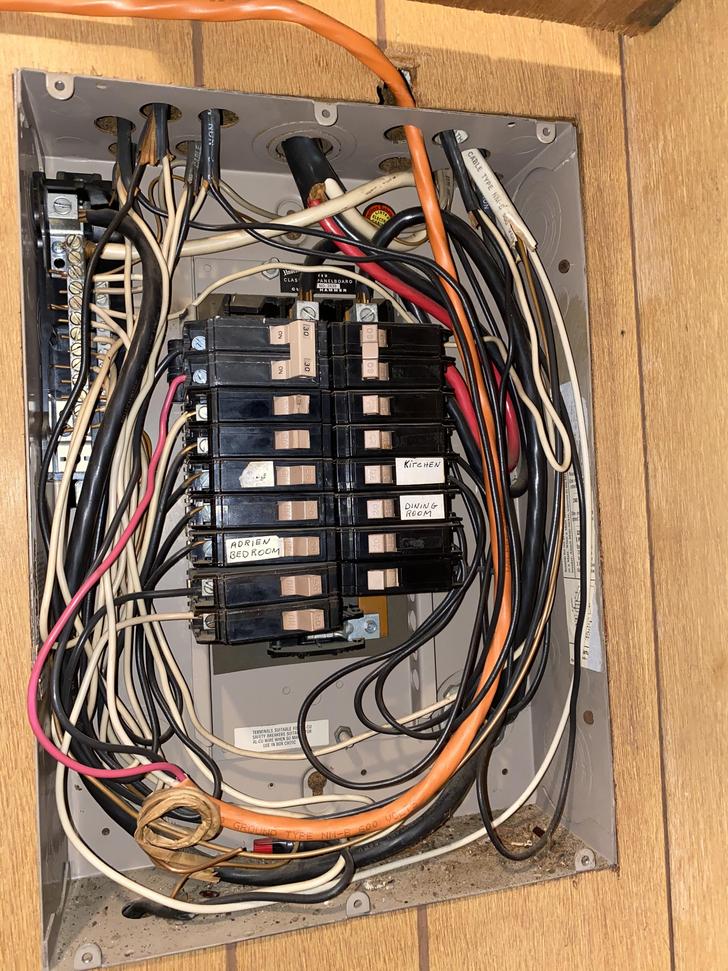 Can you install a new 240V breaker? Probably. It looks like the necessary two spaces are available on the bottom-right (the one space on the left side can only get you 120V without shuffling things around).

Pictures of that areas straight-on would be helpful, as would pictures of the panel front and the stickers on the inside left and right sides of the box.

Since there is no shut-off in this panel, it must be somewhere upstream - probably in the same box as your electric meter. You'll want to take a look and see what the amp rating of your feed is, as that could limit whether you could run this new load at the same time as all your other existing loads. Judging by the wires feeding the bus bars, you probably have 100A service to this panel.

For an outdoor receptacle, you'll need GFCI protection somewhere in the circuit - either in the breaker or the receptacle. Receptacle GFCI can be less expensive than breaker GFCI, but may not be available in the size you want. It's also not a great idea to mount sensitive GFCI electronics outdoors.

There are some other concerning issues in your picture:

Not the answer you're looking for? Browse other questions tagged electrical electrical-panel circuit-breaker 240v or ask your own question.

0
Optimal Breaker Configuration for Split Phase Mains Power
1
what would cause a breaker box enclosure to be electrified?
2
Determining maximum total current able to be drawn through household electrical panel
3
Understanding the wiring of 2-Pole Quad Circuit Breakers
3
Need help understanding amperage ratings for panels and sub panels
1
Should I upgrade my electrical panel during a solar installation
0
How much current can my double pole breaker supply?
1
Grounding electrical sub panel in separate structure
3
Can I use an existing range circuit for a new sub-panel?
3
What wire should I run to my garage for tools and a welder?