I am building a light-gauge steel frame workshop that is made from 0.55mm cold-formed 90mm x 45mm (2"x4") light-gauge steel studs. The structure is wrapped in 25mm (1") of extruded polystyrene (XPS) insulation and then 12mm (1/2") plywood cladding (siding). The cladding requires stainless screws due to the CCA preservative and the proximity to the ocean also requires stainless screws to meet New Zealand building regulations.

What methods could be used to allow using stainless screws in the galvanized steel studs? I would think there would be something similar to plastic wall anchors that could be used but I haven't found any references for it.

I would like to have a few options to consider before discussing with the architect and building inspector so a final decision can be made on the spot.

I did find a B8 coating from Bremick that is an electroplated zinc and nickel blend that is compatible with galvanized steel and may have enough corrosion resistance to be substituted for stainless 304 or 316. 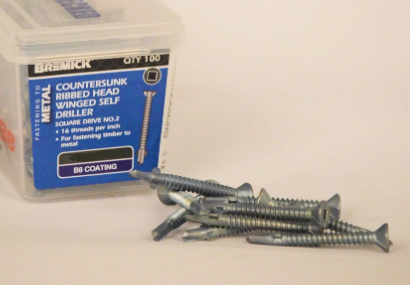 I also found some bi-metal wing screws that have a hardened steel tip and a few threads welded onto a stainless head and shank, but it doesn't look like the hardened steel tip is intended to be load bearing and is just there to drill through the steel stud quickly.

After a bit of back-and-forth between the inspector, architect, and engineer, the conclusion is that:

After researching the perfect screws and managing to get my hands on them, I did some tests. The results were a bit surprising, I'll get some photos in the next few days and post the results since it will likely be useful for others that are in the same situation.

@Jon, @Freeman, and @ThreePhaseEEl, thank you for your comments.

So the conclusion was that stainless steel is fine as long as the junction between the galvanised steel and stainless is inside the building envelope which ensures that there is never enough moisture to cause galvanic corrosion.

Galvanised fasteners are NOT allowed to be exposed externally for the building site since I am within 500m of the shoreline, although it is a protected inlet and the site is 50m above sea level. Existing galvanised fasteners on the house which has been in place for 40 years are still rust free, so local conditions are more mild than the actual corrosion zone specified on paper. The H3.2 CCA treated cladding requires stainless fasteners, but assumes that they will be exposed.

The total thickness is 42mm and a minimum of three threads must be left exposed on the inside. Allowing for the taper or drill point on most screws required between 65mm and 70mm total screw length. Many of the specialty fasteners were only available up to 60mm.

The steel framing is G550 Zincalume and is 0.75mm thick. The thickness turned out to be the major problem which was too thick for most stainless screws made for wood and too thin for self-drilling screws made for 1.5+mm metal.

These screws have a steel self-drilling head welded to the stainless steel screw. These should work great, but unfortunately were not available in the 65mm length that I needed.

Wing-tek screws have a drill point and small metal wings on them. The wings drill a clearance hole in the wood and then break off once they hit the metal. Unfortunately the 0.75mm steel was too thin for this to work consistently and sometimes the wings would go through the steel as well. This happened on 1 out of 3 screws in my testing.

Drill-point screws are designed to drill an interference fit and then the threads are cut into the metal. These screws are used for structural connections. Since I am attaching plywood cladding to the steel framing, I would ideally use these by pre-drilling the wood and then affixing the screw.

From my testing, these screws did not work since the drill point created a clearance hole and the threads were loose such that the screw could be easily moved side-to-side since it was essentially sticking out because of the foam insulation. Doing a pull-out test by hand, I was able to move the screw back and forth a few times and then pull the screw out. I expect that wind and thermal movement would cause these screws to back out over time.

These screws have a tapered needle-point tip with a slot for cutting threads. Instead of drill a hole, they basically peel the metal away which effectively increases the thickness of the metal. They hold tightly and are often rated for drilling into thin steel.

Chipboard screws have a needle point and are available in stainless steel. I tried several of these and 2 out of 3 dulled when going into the G550 steel. If I pre-drilled, they would often snap off or bend before being fully seated.

There are thousands of different types out there and I ended up finding some 5mm x 65mm coated steel screws with a T17-type tip from Optimaxx. These have passed a 2000+ hour salt spray test and have a 20-year exterior corrosion protection. I screwed some test samples of the screws into steel framing, removed them, and then placed them in sea water on top of a piece of the H3.2 CCA-treated cladding and allowed this to wet and dry out every day. I have another sample with the cladding, insulation, and screw that is sitting outside in the weather. After 3 months, neither have any corrosion on them.

The cladding screws need to have a durability of at least 15 years, so the inspector did not have any concerns.

Given no suitable alternatives, no corrosion with the tests samples, and the fact that the existing structure on the site with exposed galvanised fasteners in the same H3.2 CCA timber and has not shown any corrosion in 40 years gives me some confidence that this will work. 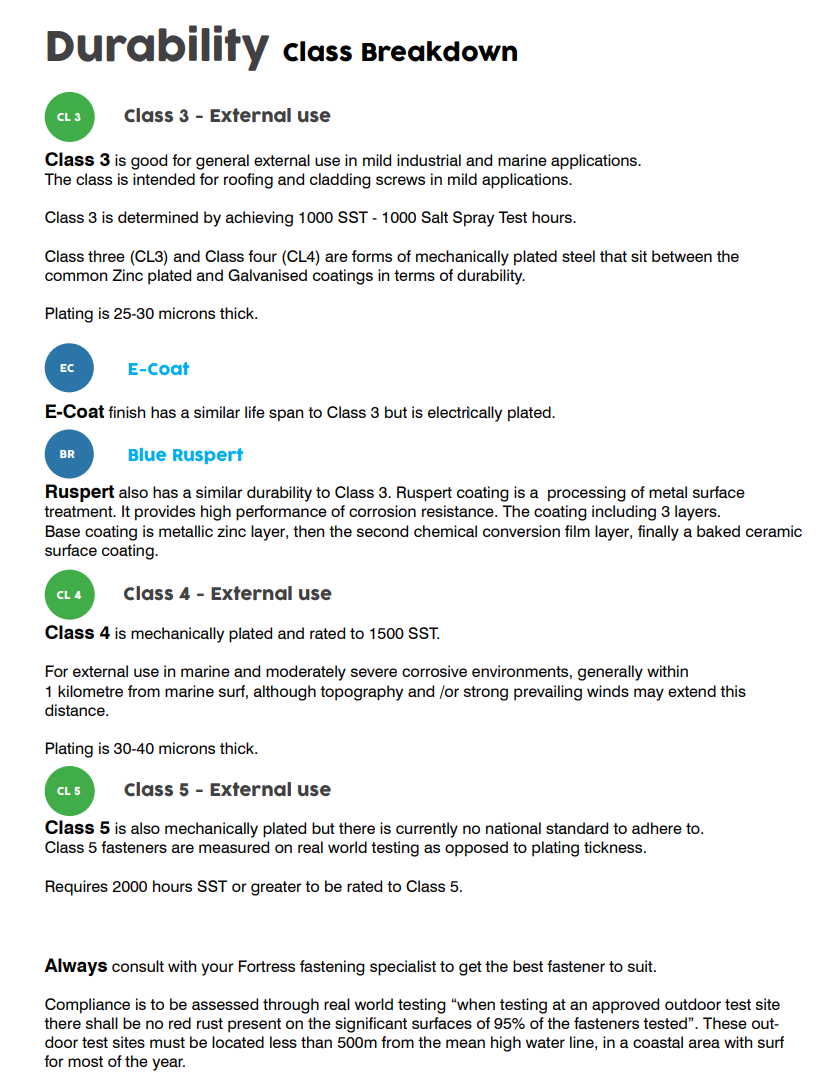 As you know, this really comes down to the personal interpretation of the regulations by the inspector and their willingness to approve whatever fastening system is specified by the Professional Designers engaged on the project based on their acceptance of design liability, which at least in the USA any licensed and insured Engineer that has applied their stamp and any licensed and insured Architect who has permitted their drawings has committed to. Specifically, if the building systems (in this case, the fastener and framing combination) are isolated from the environmental factors that would cause the degradation, a given inspector should have grounds to allow the project forward - and it is on the design team and the fabrication trades involved in the project to ensure that the systems won't degrade over time and that they have been installed without any mistakes that would expose the system to the environmental factors it's supposed to be isolated from.

I'm assuming you also know, even the highest grade stainless steels degrade under the 'wrong' conditions. The job of the design team is to put together a package that will stay within safety factors over the lifecycle of the building. Design teams do get sued successfully because of an inadequate design. It sucks to get on a project like that, but it's not any more special than any other project failure... unless people died. Planning for and insuring against that sort of thing is a part of the risk involved with running a construction business.

For further reading, check out the technical notes published by the CFSEI. They could be a good place to start if you want to deepen your understanding of fastener selection with steel construction.

Not the answer you're looking for? Browse other questions tagged framing steel framing-fasteners or ask your own question.

5
Sourcing and installing a stainless steel backsplash
40
Should I use steel or wood studs for basement exterior walls?
5
How can I make a sturdy frame out of square, steel tubing?
3
How should I protect the metal of a power rack that's kept outdoors?
4
Is framing with screws legal?
4
Guidelines for poured concrete over corrugated metal
0
Galvanized steel hinge screws with stainless steel hinges: What is the risk of galvanic corrosion?
1
Should I put a vapor barrier under metal framing in a basement?
11
I want to build an all metal, self-designed building. Are metal frame and joists really that infeasible?