Is this mold or some other substance?

My bath tub side panel was not sealed and it seems water has been splashing in causing some damage.

I always thought mold would have to smell musky however the damage doesnt smell musky. I previously had a can of drink turn into an algae like substance(see can drink in pic). The damage smells more like that. Incidentally could it be that it was spores from the bathroom panel that went into the drink can and rapidly turned it into the subtance.

Anyways its the substance is different colours and look like the result of water damage. Is this mold or is it something else? What are the black, green and other bits? 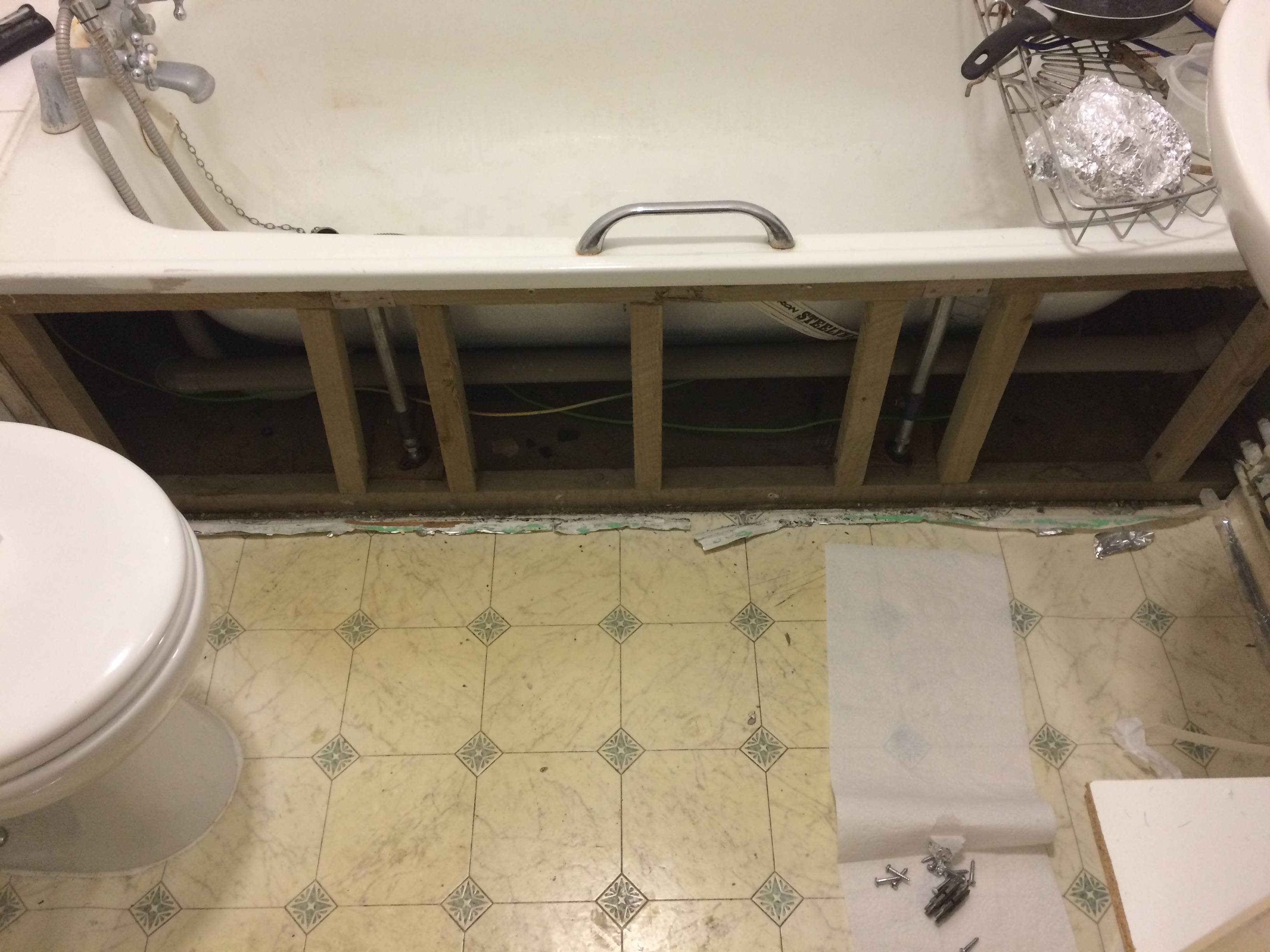 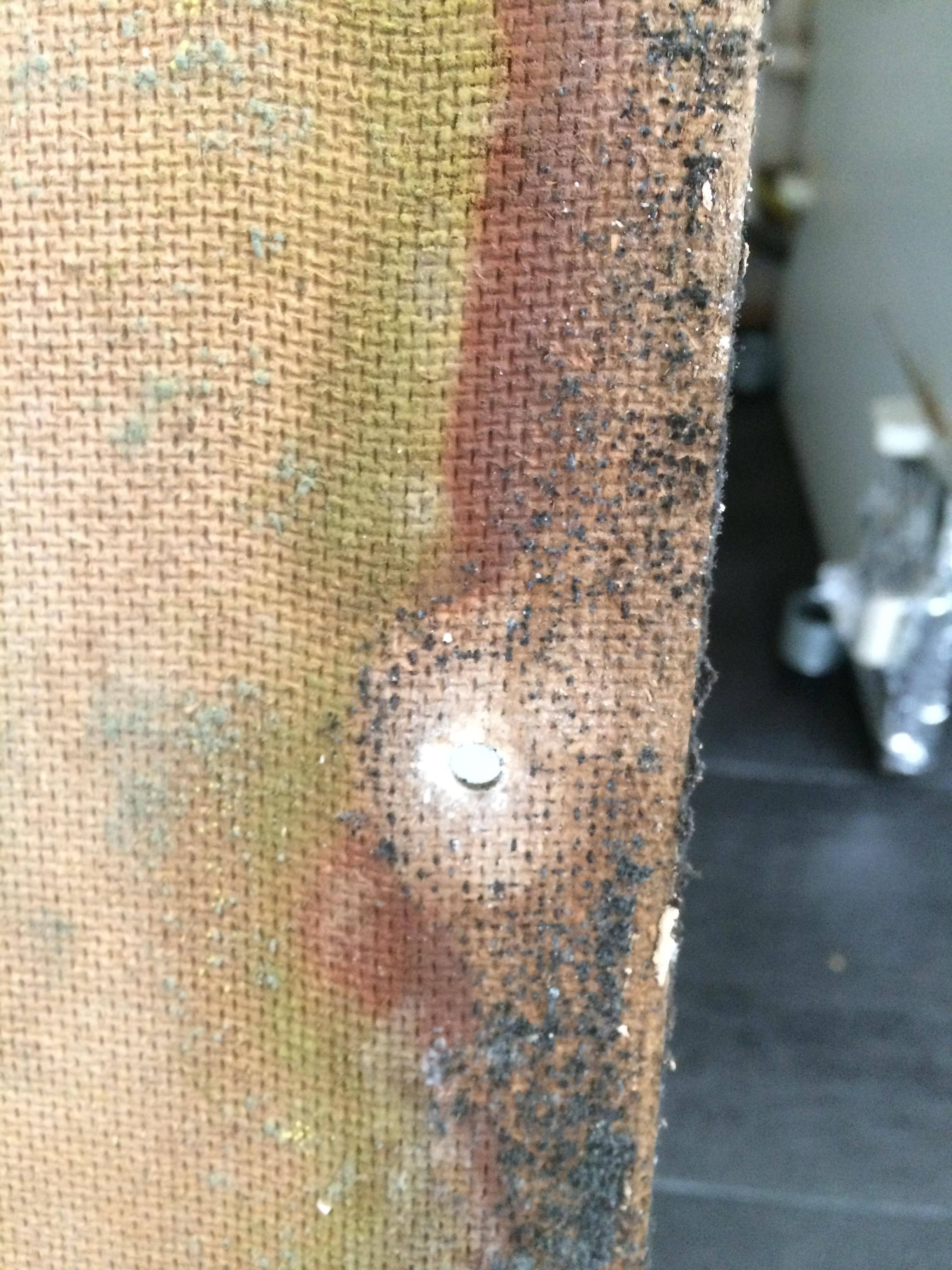 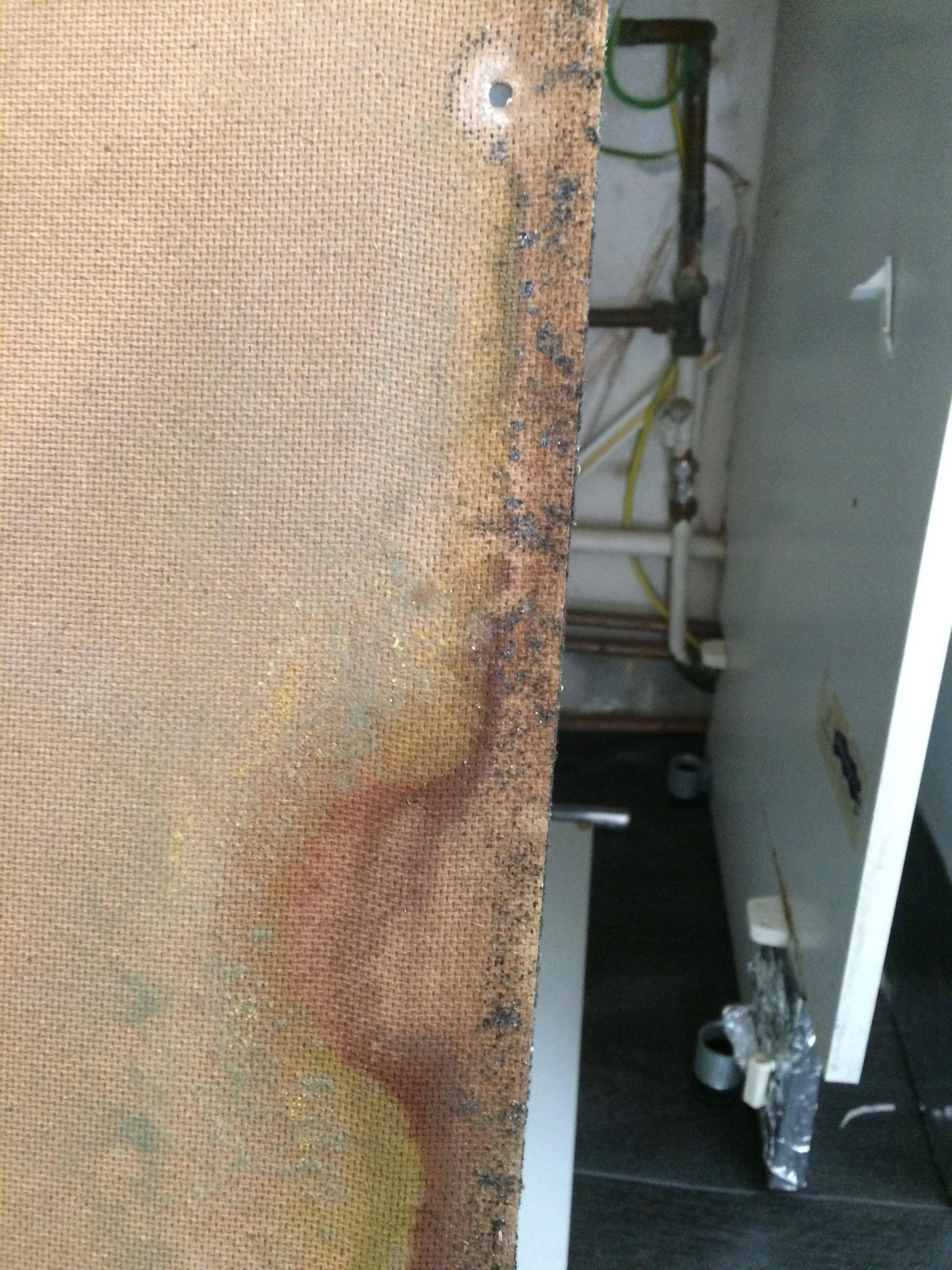 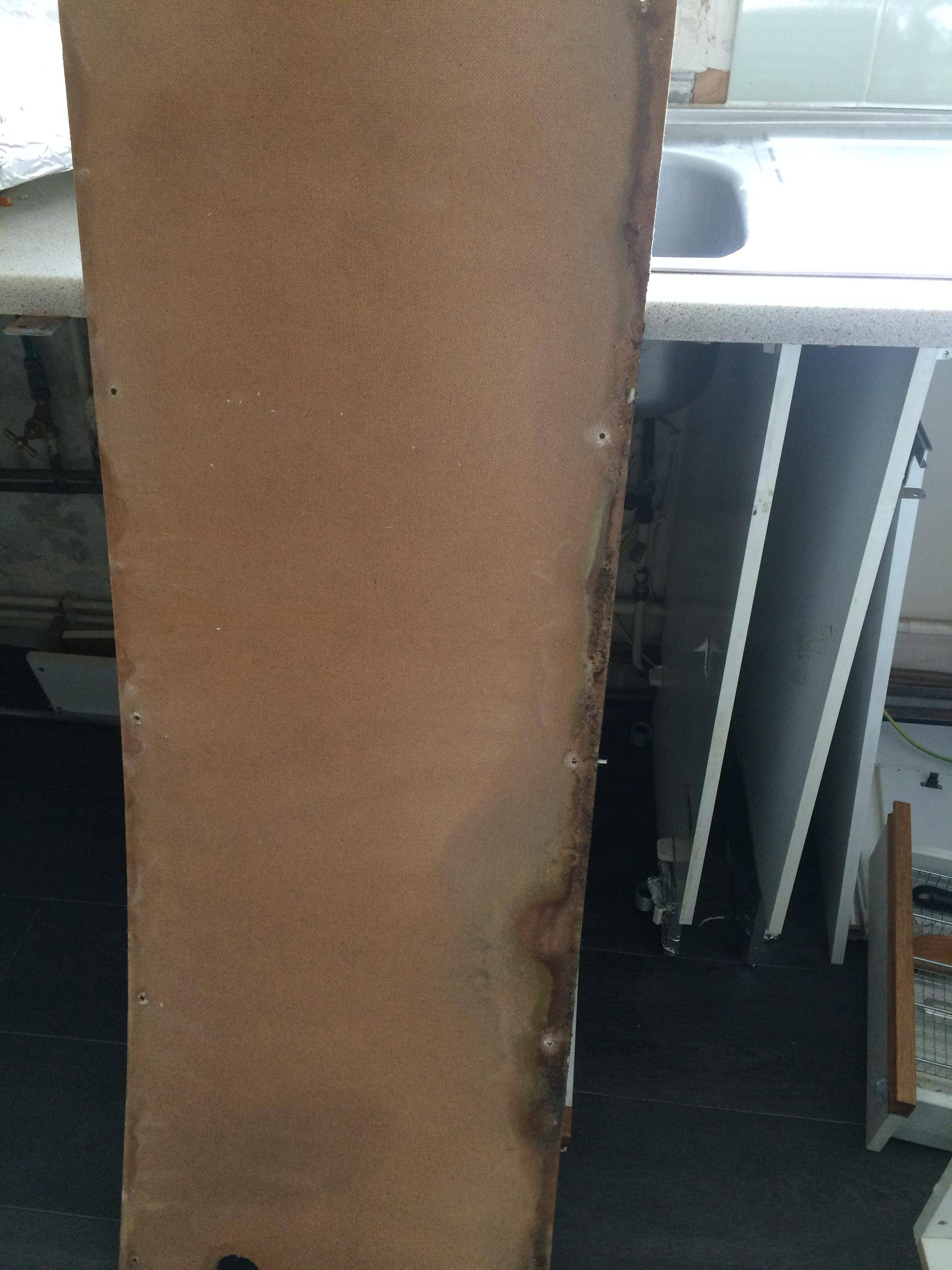 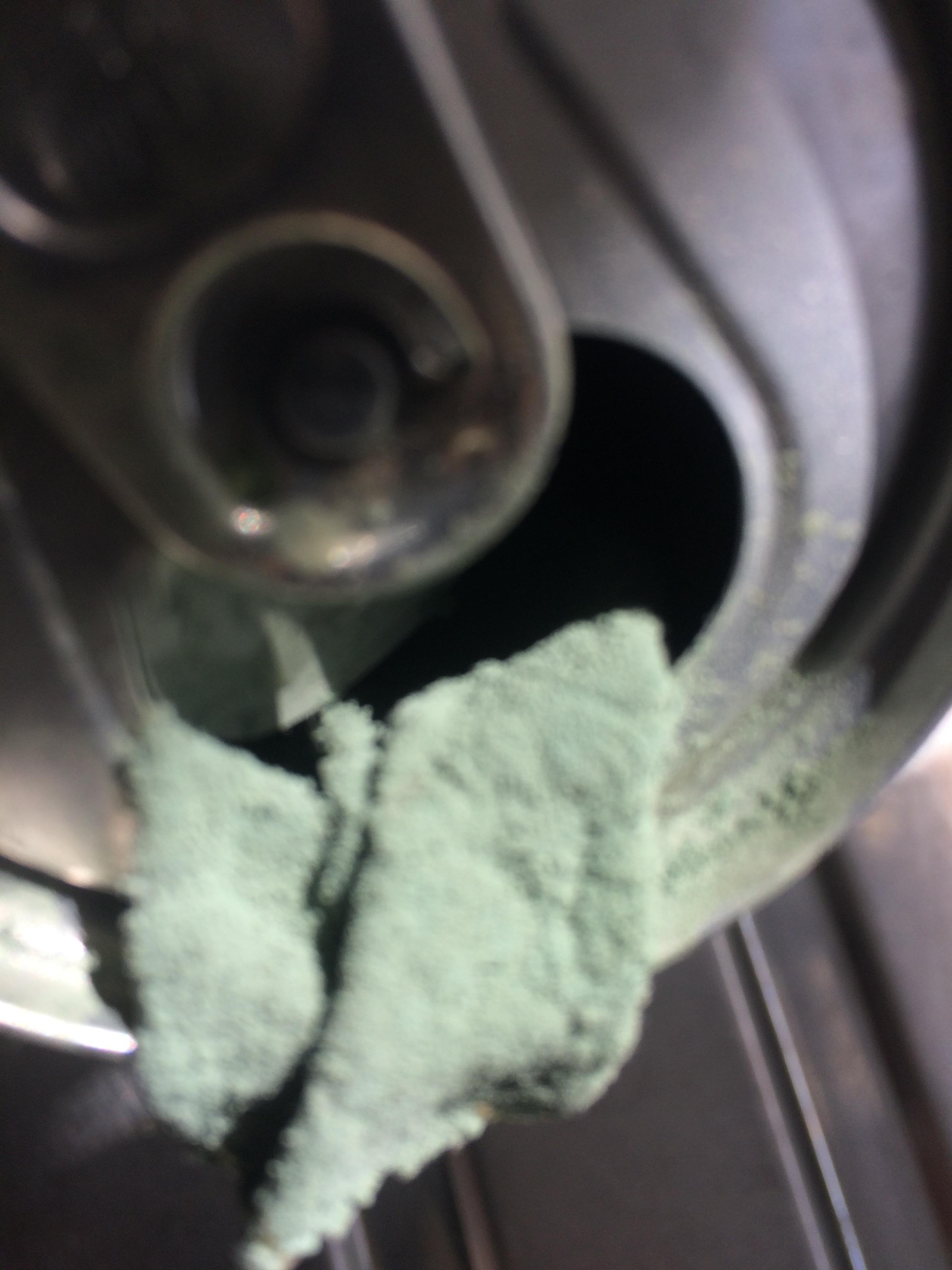 The damage to the panel does indeed look like mold and mildew damage. It may not always smell musty, especially if it is thoroughly dry right now, so you can't always go by that.

The mold in your drink can is most likely not related. Mold spores are around us all the time, looking for food. Sugary drinks are good food for them...

It is mold/mildew and water stains (or some combination of both) and the panel needs to be replaced. I don't think it can be rehabilitated successfully and the cost of new materials is not that significant...probably less than the chemicals and sealers that you'd use and would ultimately be unsuccessful.

It looks like several species of mold / fungi. Not a big problem and easy to kill but hard to keep it dormant if allowed to be moist.

Use a hydrogen peroxide mixture on it at least 3% , sponge it on let it dry and that will kill the surface spores (everything you can see) you don’t want to saturate the board it it will fall apart.

3% sponged on to dampen the surface but not soaked. If you have stronger hydrogen peroxide you can use up to ~7% any it will go a big deeper but at 7% it starts bleaching at 12% it takes the color out of cloth and carpets.

Once you have treated the panel and the area around and behind it let it dry and put it back in it will be fine. I have treated much worse even carpet on concrete growing mushrooms a good scrub with ~5% then used a steam. Leaner with water and hydrogen peroxide (no other chemicals) The carpet looked new and the house smelled fresh. This saved me several thousand not having to replace the carpet.

Not the answer you're looking for? Browse other questions tagged mold water-damage or ask your own question.

0
Does the mold on this bathroom panel look like it can be washed off?
-1
How should I contain mold contaminated items?

7
Inside of Washing Machine smells horrible. How to fix?
1
Do I have a mold problem?
0
Is this mold from a water leak?
1
Would mold eventually just die by itself if its environment was made uninhabitable?
0
Does the mold on this bathroom panel look like it can be washed off?
0
How to prevent mold in ceiling below upstairs bathroom
0
Is there mold in my apartment bathroom? What is causing the unpleasant smell there?
0
Fixing water-damaged, rotting frame. Who to hire?