I have a patch on my wall where the rolled paint goes completely flat against the wall so it looks like it was brushed on in that area rather than rolled like the whole wall.

Before I painted it there was a patch of paint there that was really smooth, almost gloss like, I have no idea what was used but it was obviously to cover up something. Anyway, before I painted the wall myself I sanded down the whole wall included that area. I then put an undercoat/primer from Dulux™ over the whole wall.

I noticed when doing the primer it bubbled up in one part of that area but only a small bit and it then dried and looked OK. So I thought, that's it sorted.

When I then rolled the new paint, it looked fine then when it dried, in that area, there was no roller stipple (is that what its called?) it just seemed like it sunk into the wall and laid flat. I left it a day then did a second coat, same thing. I then resorted to dabbing the area with the brush to recreate a similar affect as the roller, but again, it dried and laid flat again!

I think I will end up having to sand back that area and redo it unless anyone has any ideas? Also, I don't want to go through the process then find it does it again anyway. I could, of course just ignore it as it is not noticeable unless close up but it is annoying me as i spent ages trying to do it all right.

Before I forget, I even tried applying a thin layer of filler and then over painting that with the roller and STILL it lays flat!

Picture Added: I have circled the part I mean otherwise where the camera loses focus it also looks flattened, also I will get rid of the obvious bits once figured out why it keeps going flat. 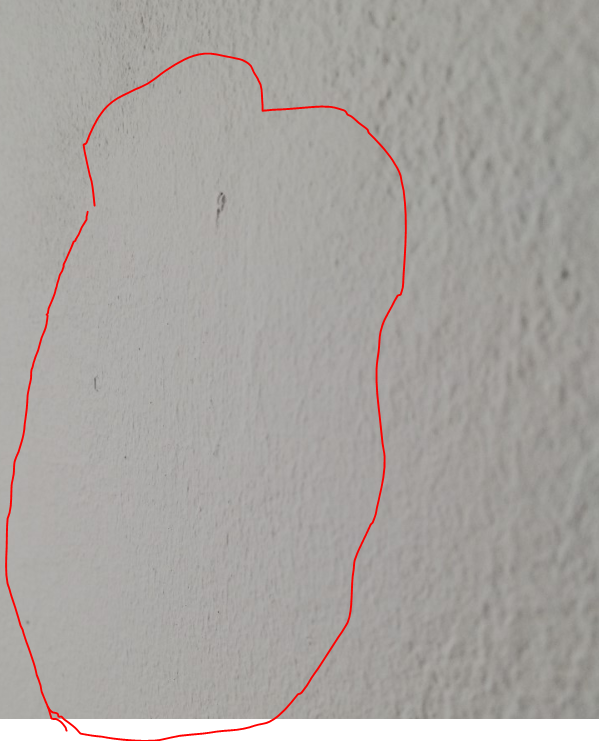 Looking at your photo that is a patched area that the person that did the patch did not know to texture it. I would rough up the area a bit with sandpaper and get a can of orange peal texture shoot the texture heavy in the center and fade to the outside (do not mask off the area or you will see the lines. After the texture is dry repaint and it will look better. Matching texture can be very tough but orange peal (what you have I’d the easiest).

The trick is to go slowly where there is no texture and quickly where there is some. Or have the spray can 8” in the center and as you approach the edge pull out to 16” . This will fade the repair and hide the repair. Paint as normal note some spray textures need primer some don’t when it is a small patch like you have I use a can and the texture that seals itself or no primer needed.

Shake the can often and have plenty of fresh air some of the spray textures are kind of nasty to breathe. Read the instructions.

Not the answer you're looking for? Browse other questions tagged walls painting paint or ask your own question.

3
Should I cut-in the whole room at once, or only the portion I'm working on?
1
How can I remove brush marks from a wall painted with metallic paint?
1
Avoiding Satin Paint Streaks with Roller
0
How to hide patch of mud & oil primer under latex paint
0
Would I have to use a new paint tray liner after only one day of I left it out overnight?
1
Sanded wall rough after brushing / rolling Kilz Original -- should I sand or is this normal?
0
Dark spots on painted wall
2
Hairline cracking in section of painted interior wall
0
Can rough paint texture on a ceiling be touched up?