How to separate bathroom light from fan

I am trying to separate the light and fan to two separate switches. I took the black wires apart and tried each one separate. One did nothing, and the other turned on both. I’m assuming this means I would have to run a new wire, but wanted another opinion. Thanks 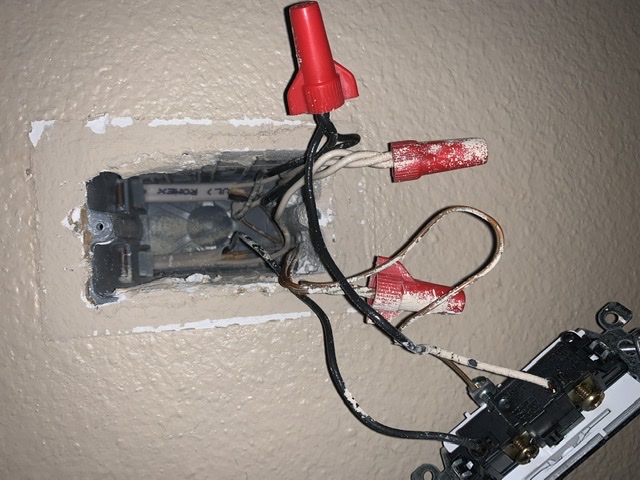 Right now, all you have is a single hot, a neutral, and a grounding wire running from the switch box up to the fan and light. As a result, with a plain wall switch and the existing wiring, all you can do is turn the light and fan off and on at the same time. Splitting the two would either require replacing the existing /2 cable between the switch and the light/fan with a /3 cable, or using communicating "smart" switches to let you put a two-button remote at the wallbox and matching relay modules at the light and fan so they can be turned on and off by signals from the remote. (My recommendation for this sort of "spot" retrofit work is Insteon gear; while seemingly pricy, it doesn't need a hub device, a cloud server, or WiFi to work, and it's much more adaptable to the realities of mains wiring installations than stuff made by IoT gadget makers.)

With just 2 cables each only having 1 hot , 1 cable is bringing the power in and the other is taking it to the fan light assembly , you would need another conductor in the cable that goes to the fan light to be able to separate them.

Not the answer you're looking for? Browse other questions tagged wiring bathroom light-fixture exhaust-fan bathroom-fixtures or ask your own question.