How can I increase the power capacity of a kitchen circuit?

My small kitchen has two standard duplex outlets in one wall: one of the outlets is in a corner behind the fridge and it's exclusively for the fridge. The other outlet (this one) is the one I use for the three small appliances (a panini maker, a small electric oven, and a microwave) plus the electric part of the gas stove (clock, oven light, etc).

I've been using a simple power cord strip similar to this, but it shuts down if I connect a small oven or the microwave.

What alternatives do I have to increase the number of plugs? I can't break the wall to install another outlet.

Every one of your appliances has a nameplate or something stating its power usage. You are looking for any of the following:

Expect most of your kitchen heat-making appliances to be 1500W, or 12.5 amps. This is because of the UL White Book, the safety standards for making appliances: UL only allows 1500 watts from appliances which plug in. Sometimes a microwave will be permitted 1800W, since it is guaranteed not to be run continuously. 1800W is 15 amps.

Now, go to your circuit breaker panel. Look for the circuits which feed the kitchen. There will be a number of funny looking switches, most of which say "15" or "20" on the handle. See if you can identify the fridge circuit and the kitchen circuit you normally use. The number on the handle is amps - that same figure we've been working with. That is the absolute hard-maximum capacity of the circuit for intermittent use. If you're running continuously (3 hours or more) you should only use 80% of that.

The nameplate is accurate on hand-held plug-in tools. It's not so accurate on certain appliances and I'll cover them.

Now, if you're doing the math, you just noticed that the oven and refrigerator Do Not Matter. However, the three "piggies" each take 12.5A or more. There's no way to run 2 of them without pulling 25 amps, and that's too big for everything - too big for the power strip, too big for a 15A breaker and too big for a 20A breaker.

It ain't gonna happen. You cannot run 2 appliances at once on one circuit. A different power strip cannot fix this. The circuit breaker downstairs will just trip instead.

What about that refrigerator circuit?

Modern Code requires that every kitchen have two 20A receptacle circuits. I don't know if your kitchen complies. If it does, the other circuit might be that refrigerator circuit. Find Out. Turn off the circuit breaker that feeds the oven and range, and see if the fridge loses power too.

If the fridge is on a separate circuit, well, fridges take very little power. It can easily share the circuit with ONE - exactly one - piggy.

The reason we prefer to dedicate fridge circuits is we don't want another appliance causing the circuit to overload or ground-fault, and trip out the fridge while you are away or without you knowing it.

Also, it is vital that small kitchen appliances have protection called GFCI. That protects you if an appliance falls in the sink, or has an electrical problem of some kind. That protection is useless for refrigerators - you're not likely to drop one in the sink! And it can spoil food if it has a false trip, which happens a lot with refrigerators. So fridges are often not on GFCI. So if they told you not to use that circuit, see if that is why. If the plug is more than 6 feet from a sink, it should be alright to use.

The power strip is protecting itself the same way your circuit breakers will if you turn two many things on at 1 time. Adding more receptacles will cause the breaker to trip. In the US 2 circuits are required in a kitchen , is this just a dorm room of motel ? Without other provisions for cooking?

You can not safely increase the power available at the outlet, without changing the wiring and circuit breaker.

Don't use a power strip with a built-in breaker. They're usually more sensitive than the service panel breaker already protecting the circuit, reducing current capacity. Instead, use a plain cord with multiple outlets or an outlet expander: 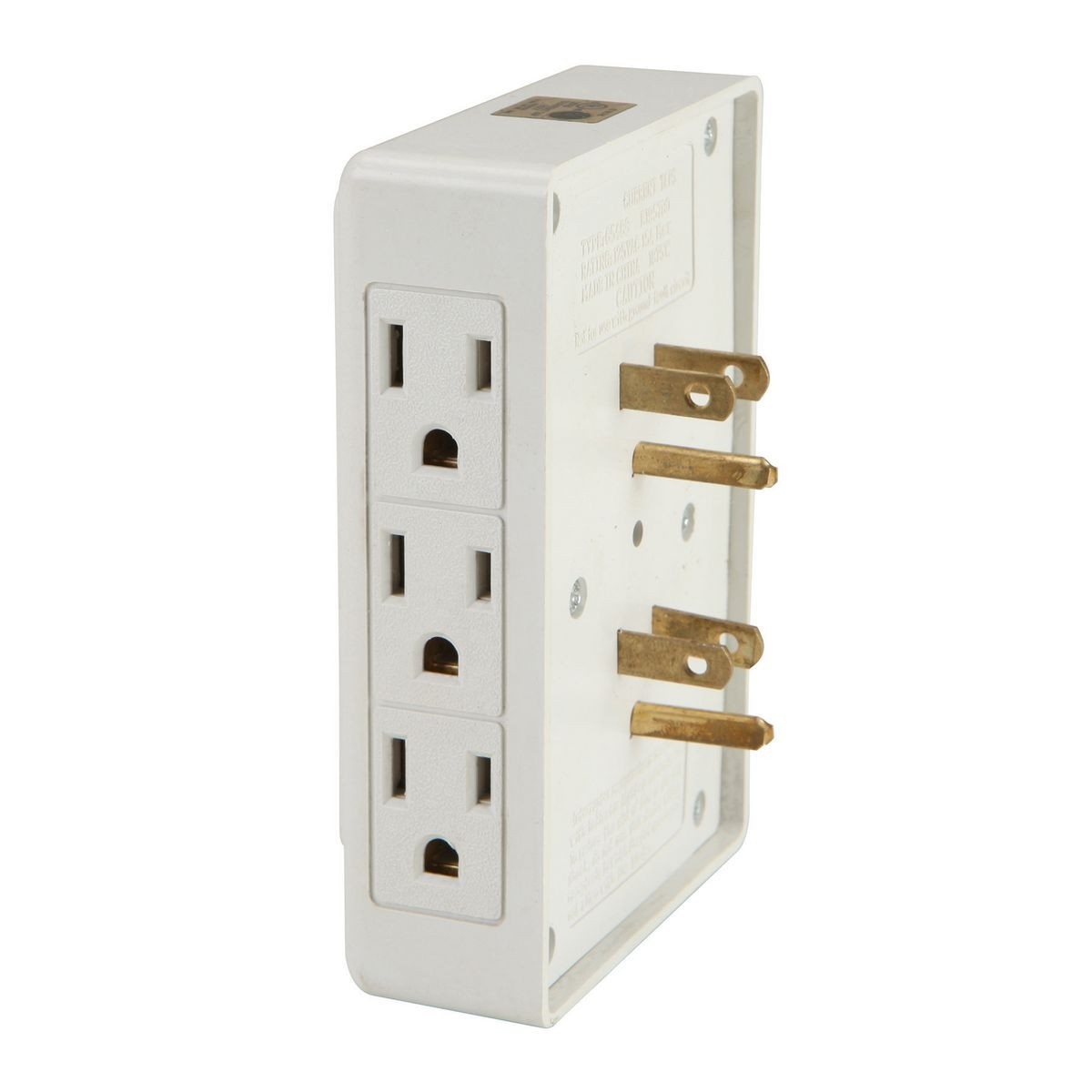 Note that this will not give you more current capacity than the service panel breaker currently allows. You'll be able to keep all your appliances plugged in, but you'll still need to be judicious in when you fire them up. What you won't have is nuisance trips of the power strip.

Not the answer you're looking for? Browse other questions tagged electrical kitchens or ask your own question.

2
Is it safe/compliant for one circuit to supply grounded wall outlets in both a kitchen and a living room?
4
Stove and oven on same circuit?
2
No power to circuit after coffeemaker plugged in for random amount of minutes
1
Question re: Installing New Power Strip in Kitchen
0
Kitchenette vs. kitchen electrical circuits
20
Does unblocking power bar outlets through short extension cords increase fire risk?
1
How urgent is it to resolve two-prong problems?
1
How can I best balance current loads among my existing kitchen circuits?
7
Can I Piggyback 4 15 amp outlets off a 30 amp fuse?