I am renovating a cabin including complete re-siding so I thought I would use this as an opportunity to upgrade the electrical service to 200amp (currently 100amp). Two reasons, 1) might want to add real HVAC in the future, 2) the current service is not up to code and down-right dangerous (as you can tell from the attached picture). In the picture the black box is the location of the interior (now main) panel. The red box is my proposed new meter/panel location/mast.

I was going to do this by putting in a 200amp panel outside and make the interior 100amp panel as a subpanel.

The building is on a steep hill and I need to add a handrail about 36" above the stairs and if I need to keep the meter no more than 6' above "ground" level that gives me approximately 36" for panel and meter if stacked (I need the panel above the handrail so it can open). I'm not excited about having the meter and panel side-by-side (making 4/0 Al bend around corners seems a lot of work) so I've been looking at meter/panel combos such as the Square D SC2040M200C which puts the meter roughly at 5' above "ground" level and gives me 20 spaces. Or the SC3042M200PS which is a little less deep.

I tend to shy away from "combo" things as I feel they eventually limit your flexibility however, I can't imagine 200amps in a load center with 20 spaces/40 circuits wouldn't serve me fully in the future (famous last words?).

Comments on the combo panels and this panel in particular? 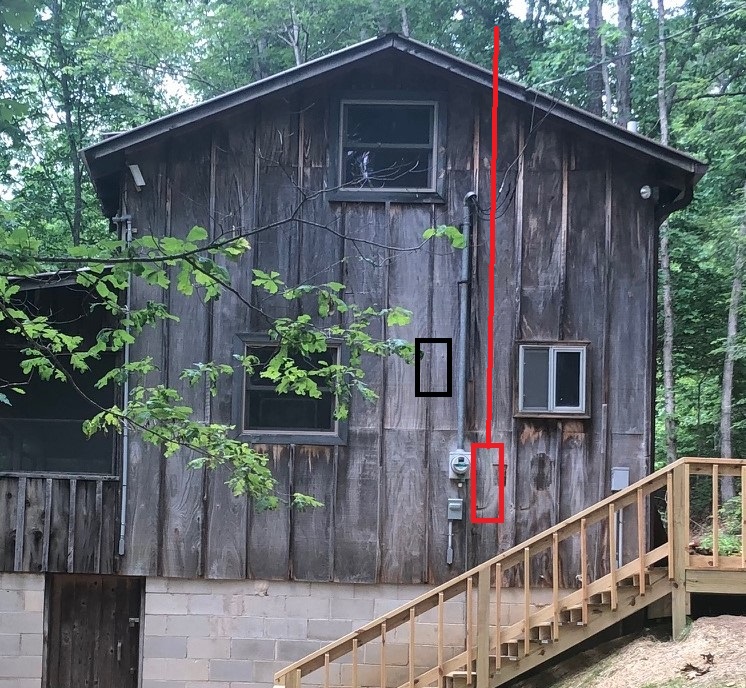 I surveyed the area again this weekend and unfortunately there is a huge tree in the way of moving the utility supply any further to the right. As it is, where the service attachment is now, the service drop runs a little less than 5' feet away from the tree. I talked again with the inspector who admitted "it's best not to" have anything over the stairs but felt the meter was OK as there wasn't another good level place for a drop. He agreed to leaving the meter where it is (but lower) and running to a panel in my basement even though the clearance is only 6'3" high from floor to ceiling in the basement. I asked him about an outside disconnect and he said it wasn't required (yet) but a good idea and recommended a "combined meter base disconnect".

This leaves me in a quandary - Leave the meter where it is and put the panel inside (both of which are not 100% compliant) or something else. I could put the drop to the left (as per my updated picture); this should be an acceptable landing but puts the panel in the way of "traffic" and the mast head will be close to 24' above ground (30' maximum I believe). I also don't relish the idea of having to bore through cinder block (or should I exit the panel on the side and run my branch feed through the rim joist like my pciture?). However, this should eliminate concerns about meter location, panel location, and height of my basement).

Any additional suggestions at this point would be greatly appreciated (@ThreePhaseEel et al). 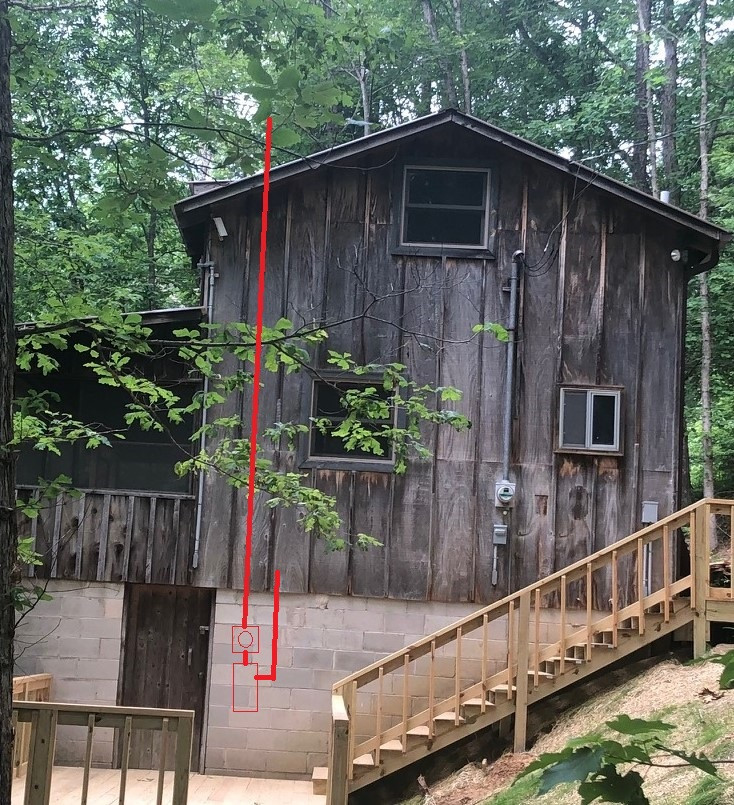 Putting a breaker panel, meter-breaker, or any sort of overcurrent device over the steps of a stairway, as you are proposing to do, violates NEC 240.24(F):

(F) Not Located over Steps. Overcurrent devices shall not be located over steps of a stairway.

So, if you want to use a meter-main for this job, you'll need to move the service mast to a place where the clear working area in front of is on flat ground; while around the corner to the right didn't work, placing it where you describe off to the left side would provided the service drop can reach there. Amazingly enough, though, your utility's service requirements for overhead service do not expressly prohibit mounting metering over stairs, so if the service mast can't be moved, that'd be a good reason to have a separate meter base and main panel instead of a single combination unit.

If you are going to go with a combo unit, don't pick one that limits your options for getting power out of it

If you do go with a combination meter-main, your biggest issue will be finding one that does not limit your breaker options excessively. For instance, most center-fed/single-column-width meter-loadcenters (such as the SC2040M200C you are proposing) cannot handle a 200A branch breaker due to wire-bending limits. You could go with a unit with a set of 200A feed-through lugs in it instead, such as the GE TSM820CSCU in a ringstyle, single-column-width form factor or the Eaton MB816B200BTSCU in a ringless, over/under form factor, but that comes at the cost of having fewer breaker spaces in the meter-main. Over-under units with more spaces, such as the (ringless) Milbank U5268-XTL-200, are also available and provide space for a 200A feeder breaker or subfeed lug block in lieu of the feed-through lugs, but that does lead to somewhat more difficult wiring bending-wise.

The side-by-side, full-width meter-loadcenter you proposed, namely the SC3042M200PS, does not suffer so much from these infelicities, but this design is not as common in 200A equipment, especially for feed-through-lug configurations. However, with 30 full-size breaker spaces, sacrificing four of them to a feeder breaker or subfeed lug block is generally a more acceptable tradeoff given that the outdoor panel doesn't need to do all the work. Do note that some side-by-side, full-width meter-loadcenters (mostly Siemens units) suffer from severe stab ampacity limits that keep them from being useful in applications such as yours, although the Siemens MC3040B1200SECW is a useful alternative to the Square-D part you suggested.

Note also that with the coming of the 2020 NEC, you will need to provide a firefighter's disconnect on the outside of the structure; while a meter-main is the simplest way to do this, it does not prohibit you from going down the road of a separate meter socket and main panel, either.

Aside from what ThreePhaseEel discusses, you are also required to have working space around any panel. The working space must be 30” wide (not necessarily centered on the panel, but including the whole panel), 36” deep so you can work at arms length, and 78” tall so Doctor J can work on it without stooping.

This intersects adversely with rapidly approaching (and here in 5 states) NEC 2020 amendments which require an outside disconnect at/near the meter. That does not literally prohibit a combo meter-disconnect, but the 2020 Code strongly invites people in your situation to use a mini-panel, with a meter-main, a few breaker spaces and through lugs... and that is out of the question on a stairway.

If your local AHJ and power company permit a meter on a stairway, it may be because the local terrain is so hilly that flat spaces are hard to come by. I am quite sure the AHJ is not waiving the working space requirement for a panel.

30
Is it ok to have mixed grounds and neutrals on bars in a breaker box?
1
Is voltage drop calculated from the meter or the service panel?
1
How to run second disconnect/load center from meter
1
Can I add a second disconnect main breaker load panel from the meter trough?
1
Adding safety switch between meter and panel
2
100amp to 200amp Service Upgrade
0
Replacing MC panel with separate meter and service panel
2
Electrical load calculation for 1,300 sq foot condo
1
Installing a new 100 amp service panel for a new basement suite in a house serviced by 200amp