My house has the dishwasher and disposal plugged in under the sink, where the bottom outlet is hooked to the disposal switch. I've heard it isn't generally ideal to have both on the same outlet, but that's how the builders did it.

I just replaced the dishwasher, and the installation kit included a power cable with a right angle connection. Since the bottom outlet is on a switch, I have to use the top outlet, which blocks the bottom.

I realized this of course after I completed all the hookups and I really don't feel like taking the whole thing apart again.

The solutions I can think of are:

What are the ups and downs of these? 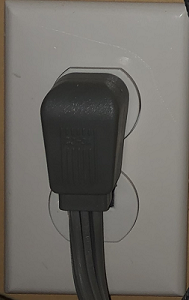 Re-wire the outlet so the top one is on the switch instead of the bottom one. Is this even possible, and if so, considering I've never done it before and it's under the kitchen sink without much room, how hard would this be?

This should be very straightforward. There are actually two different configurations possible. Find the one or two breakers and turn them off. The catch is that it could be one (hot split, 1/2 to switch and top receptacle, 1/2 to bottom receptacle) or it could be two (most likely as an MWBC, one hot to each 1/2). We can't guess which one it is. If there are two breakers then they should be a pair (technically, common shut-off, in reality almost always an actual "double breaker").

After turning off the breaker(s), use a non-contact tester to make sure there is no power. Just in case. Then take off the cover plate and remove the receptacle from the wall but don't remove any wires yet. You should see two colored hot wires on the brass screws (or backstabs near the brass screws) and one or two white neutral wires on the silver screws.

Put it all back together, turn on power and you should find the switch now operates the bottom receptacle instead of the top receptacle.

Put the dishwasher in the switch outlet, and tape the switch permanently on. Put a smart plug between the disposal plug and the wall, so I can control the disposal with my cell phone.

DO NOT DO THIS! EVER!

This is not only not "normal", it is exceedingly dangerous. The reason the disposal switch is normally above the sink is so that you can see exactly what is going on when you turn on the disposal and so that you can immediately turn it off if there is a problem. If you control by phone, numerous scenarios could happen, including "someone else borrows your phone to make a call and accidentally starts the App while you are working in the sink" and "phone crashes right after you turned on the disposal or the phone rings while the disposal is on, will the App stay focused?" etc. DO NOT DO THIS! EVER!

Put the dishwasher on an extension cord. I've read this is a really bad idea, but are there particular extension cords that would make this safe?

This is OK as a temporary solution, until you rewire the receptacles.

Cut the cord and put a new end on it. I've never done this, so is this difficult or dangerous?

Not cut the cord, REPLACE the cord. This actually is not too hard on a properly designed appliance. But the work involved is comparable to "swap wires in the receptacles" and doing that doesn't actually cost you anything, where this will cost you a new cord.

Your best bet would be to rewire the outlet. It's an easy job. the hardest part is getting into position and cleaning out under the sink. Find the two breakers in your main panel that feed the dishwasher and disposal and turn them off. Remove the cover plate and then the screws that attach the outlet to the box. Pull out the outlet and locate the brass screws on the side of the outlet. There will be two wires attached to the two brass screws or stuck in the back of the outlet. Loosen the brass screws or if the wires are stuck in the back of the outlet, gently grab each wire with a pair of pliers and twist the outlet back and forth while pulling the wire. It will come out. Remove the wires and reverse them. If there is only one white wire on the other side of the outlet, nothing else needs to be done. If there are two white wires, then they need to be reversed too. Remount the outlet and your done.

Your option two is a lot of work for a disposal... you'll probably drop your phone in the sink while running the disposal and won't be able to turn it off.

Extension cords are not meant to be a permanent solution and I'd shy away from that.

Don't cut the cord. That's a factory seal and you don't want to mess with it.

One non-invasive option for problematic right-angle cables is a rotating plug adapter like this one. You could leave your outlet wired as-is, and the adapter would let you rotate the cable out of the way. Make sure the one you get is rated appropriately for the load. Probably not a long-term solution but as far as quick fixes go, it's more convenient than having a big coil of extension cord under the sink.

They also make power outlets that rotate, for the same effect without the additional hardware. This would involve replacing the outlet and again, make sure it's rated for the load.

Although if you're going to re-wire your outlet, it's probably better to replace it with one that has the receptacles mounted at a 90-degree angle (example). 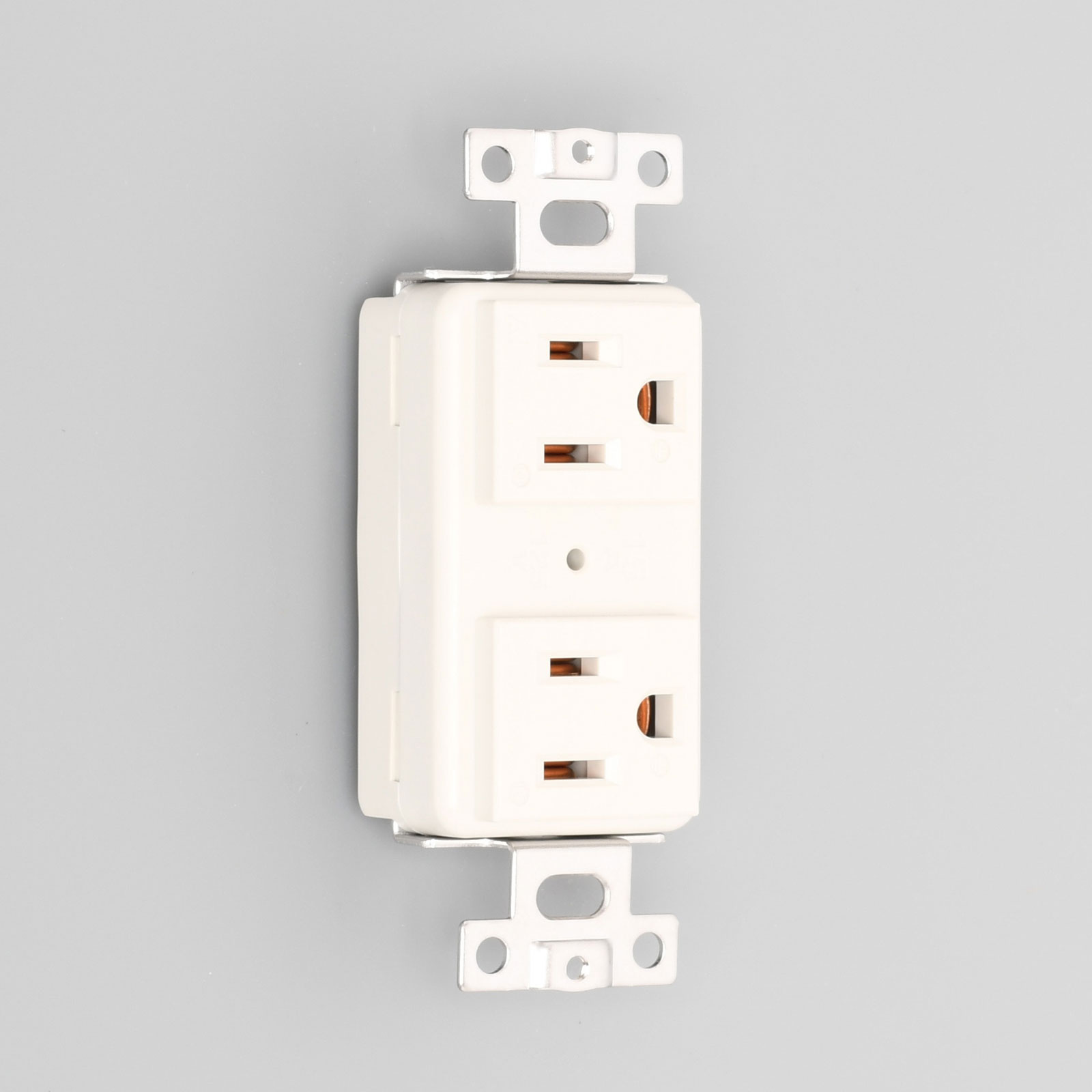 A buddy of mine had a sideways outlet like that under the sink and it was by far the cleanest way to connect a disposal and dishwasher that both had those right-angle cords. Also useful when installing an outlet horizontally in a baseboard. Mount it with the ground pin facing up and you can get enough clearance to plug in a bulky transformer without an extension cord.

If you remove the cover and the tow outlets inside are seperate, maybe it is possible to rotate the top one? not sure about US, with german outlets this is possible, even rotating 90 degree, but that doesn't seem to work with yours (round sides, flat top and bottom).

As a generall rule, don't do hacks in the household, especially with electricity, gas, fire .. always follow the proper procedures. you might harm someone who works with it in 10 years, might be even you after you forget the hack. not a nice thought just to save some bucks or time.

And like the other answers already suggest, always use the breakers and check the contacts if they are still hot.

power outlet adapter from @bta looks nice, it's specially made for this usecase and everyone understands what it does and why it got installed, no surprises.

Not the answer you're looking for? Browse other questions tagged electrical dishwasher garbage-disposal or ask your own question.