A little history - We bought this condo unit last year and just noticed that the paint the previous owner used on the deck boards were bubbling and peeling.

We inquired with the condo management to confirm that it is our responsibility to replace the decking boards.

Upon further inspection, some of the boards were noticeably moist and rotted. Some areas were worse than others. We initially thought it was due to the thick coating the previous owners used which may have trapped moisture and decided to replace all of the boards.

There is one area right above the floor drain that is collecting moisture on the underside of the boards. The new boards in the other areas of the terrace that were just laid down (not screwed down yet) and seemed to be ok.

This area in the winter is constantly warm and snow does not build up. Based on what we see, there seems to be a good amount of moisture in this area.

The structural base of the deck (and the deck boards) is constructed with pressure treated 2x6 boards which is sitting on top of a membrane.

Would larger gaps in between the boards (currently at 3/8”) allow enough airflow to prevent future rotting issues? I’m thinking that something more needs to be done to allow for more venting and prevent it from building up in the first place.

This is the drain area: 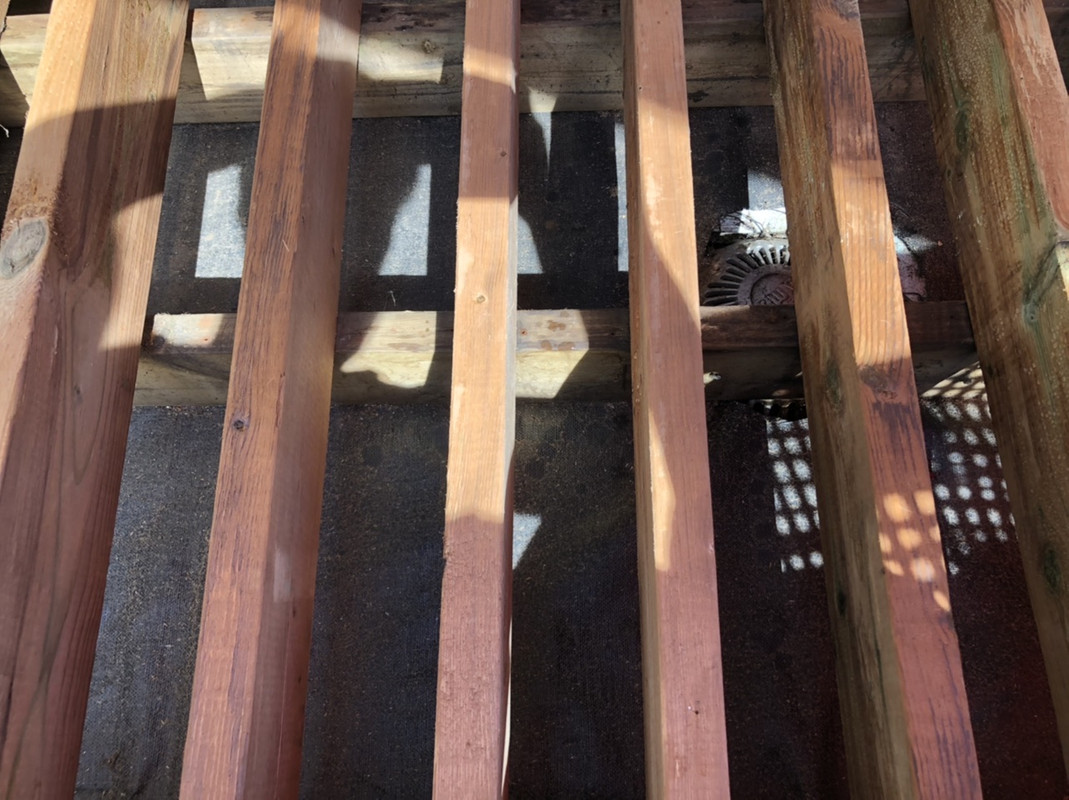 NOTE: The deck boards are flipped up on their sides to help them dry out.

You should replace the boards with composite decking.

I don't know what the old boards were or how old they were. A roof top deck that covers a membrane is always going to have moisture.

The deck structure looks to be 12" oc so you should be good to use composite.

If you flood the membrane with water chances are there are low spots that pool the water for portions of the year. It will never be perfectly dry in there. You don't want larger gaps in between your boards unless you want to loose coins, keys, etc in between the boards. Larger gaps would probably help somewhat with ventilation but I doubt it would be a magic fix.

Not the answer you're looking for? Browse other questions tagged patio decking or ask your own question.

2
What is the best position for a French drain between a wall and a patio?
0
Joining two composite decking boards side by side
1
What type of fasteners should I use when replacing exterior deck boards?
5
How can i remove my rusted and stripped deck screws from my deck boards?
0
Prevent cupping and splitting of wet PT deck boards?
1
Deck Joist Hanging Options
1
Deck screws undetectable and boards are rotting