The Question (see pic below): Can I safely sister 2x8s to a 2x4 king post truss/open rafter system to achieve an insulated open ceiling/vaulted design.

The Details: I have a garage that is 18 feet long by 14 feet wide. I am planning on converting this slowly to a finished shop space and would prefer open rafter/vaulted ceiling for aesthetics. I also want the option to convert to ADU and am going to the headache to rough in everything to code. Energy code requires R49 unless it's an joist-vaulted or single rafter design, in which case you can use R38. Since I am leaving 1-2 inches of space for the air gap between the roof and the insulation, I think I can just add 2x8s sistered to the 2x4 rafters then use 6 inches of thermosheath R13.1 (per 2 inches) to get R39.3 and still have enough room for the air gap.

The entire king post truss system is built entirely out of 2x4 except the king post, which are 2x6s. There are 4 trusses spaced 4 feet and then rafters spaced 24 inches (the last truss is 2 feet from the back wall). I'm located in Spokane, WA.

I'm just worried that the weight of the 2x8s will exceed the load for the roof, especially where there is open rafter. Is this the case, or am I OK? Any other thoughts on how to achieve this?

Here's a pic of what I'm dealing with: 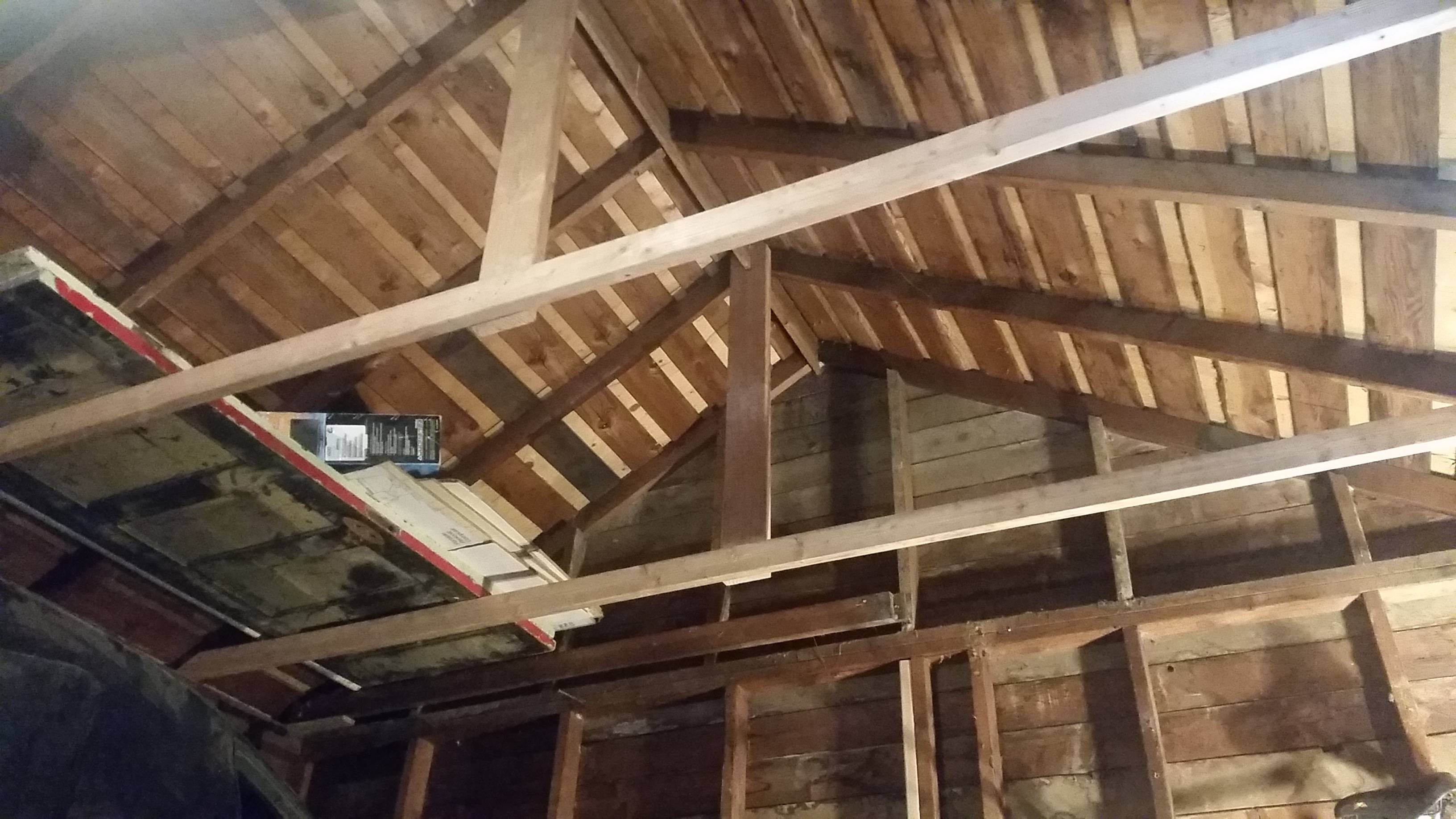 Here is what I am going for, ultimately, understanding that when it's all said and done only the tie rafter and the king post would be exposed. 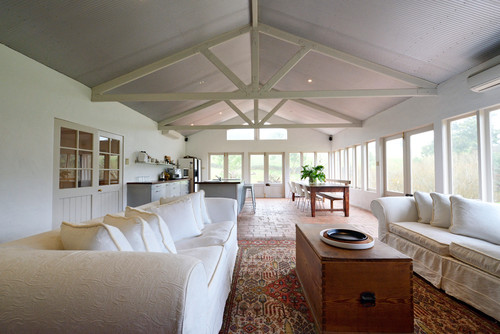 This type of roof construction is what I call “stick built” That is to say individual boards are nailed together in the field in place. Another similar type is “beam and joist”.

I think you have two options:

OPTION #1: Install a “roof tie” from one side (2x8 joist) to the other side (2x8 joist) to keep the joists from spreading apart when you remove the horizontal 2x4’s to create the vaulted design. (If you like the ceiling vaulted up to the peak, the roof tie could remain exposed.)

OPTION #2: Install a ridge beam the length of the roof so the new 2x8 roof joists can rest on the beam. By installing the ridge beam, all of the vertical forces (Live Load and Dead Load) will act vertically on the ridge beam AND exterior walls...thus no need for the roof ties.

I like the idea of using rigid insulation so you can maintain a 1” or 2” air space between the insulation and the bottom of the roof sheathing for ventilation. However, remember the code says ventilation shall be “cross-ventilation”. In order to accomplish this you’ll need to either provide a ridge vent and cut the sheathing back so air can vent in each joist space...or cut holes through the ridge joist so air can circulate from side to side of building.

To answer your original question, yes 2x8’s at 24” on center sistered to the original rafters will work, but as described in Option 1 and 2, several conditions apply, (i.e.: add roof tie or add ridge beam).

The new picture shows a several structural trusses with a ridge “beam” spanning from truss to truss. This is not what was described in the OP. Building structural trusses using 2x8 joists for the top chord is possible. Providing a horizontal lower chord with a vertical king post at the center could be similar to the new updated picture. However, the 2x8 joists would be buried in the roof structure in order to provide the air space required for venting.

Not the answer you're looking for? Browse other questions tagged insulation roof post truss or ask your own question.

6
Does this 2x4 support my gable ridge?
3
Repairing a notched rafter in a truss roof
11
Can I raise a sagging shed roof by winching the walls back into place?
1
What is the best way to insulate an unvented interior vaulted ceiling with 2x6 rafters?
1
Basic truss design for outbuilding