For some reason, I now own a Sunbeam Radiant Control toaster, model T-20C. While I found it in The Netherlands, it's fitted with a US cord and plug.

On the bottom, it reads: 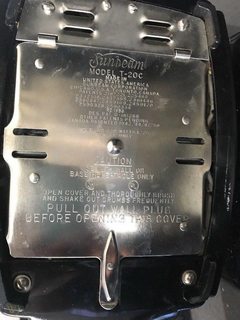 I'd like to use it in The Netherlands, where we get 230V AC from our outlets.

Using a power converter is not an option, since the toaster wants 1275 Watts. And while power converters that can handle that power do exist, it's a bit overkill to get a slice of toast.

So is there any other option? The mechanism is simple enough, no electronics, just heating coils.

It’s unlikely that you can internally convert it. That would require finding two series strings of heating coils of the same resistance, and moving them from series to parallel. Nothing but a teardown will tell you if something like that exists. Even so, the switch may not be rated for 230V, though that’s probably not a huge issue.

That is an absolutely exquisite toaster. They aren’t made anymore because of incompatibilities between their operating principle and a new UL White Book requirement. As such, they should not be trashed by risky behavior with cheap “power converters” found on the Internet or at junk shops. There’s a special hell for people who take such risks lol.

The good news is, AC frequency won’t be a problem, so you just need a reliable source of 115/120V. A proper transformer of sufficient ampacity is a fine answer.

You can overload a heavy transformer somewhat since your usage is momentary: Heat is why we care about overloading transformers; the iron and copper have significant thermal mass and take awhile to get warm enough to matter. Same way little car starter motors can start a big engine.

Do not use cheap “power converters” unless you very carefully watch their power output on a scope.

Proper AC voltage conversion requires a transformer. If it’s done electronically, there are a variety of ways to do it, in a wide spectrum of accuracy <-> cheapness. At extremes, cheap “triac dimmers” for lights make a very ugly AC waveform, that works for incandescent lights intended for that same voltage, but is a mess for anything else.

You really have to watch out first for the spec of the converter, and second for “cheap overseas trash” overstating its capabilities.

That’s another example of way too far on the “cheap” spectrum.

Now, somebody gets the bright idea “use a diode; block half the AC waveform”. Now, what did I just say? Applying 4x the survivable heat, 1/2* of the time, let’s see... do the math...

That’s right... 4x the heat 1/2 the time is still double the survivable heat, and will again fry the beautiful toaster.

I got one Sunbeam Radiant Control in eBay for the exact same reason. I'm from Spain and the AC voltage is 230V RMS, so while I wait for it to be delivered I'm also looking for solutions to this.

I happened to have one cheap AC dimmer supposedly rated to 4000W. I don't believe it, but even if is just 2000W for a resistive load is more than enough for the Sunbeam, which uses less than 1500W.

These dimmers just chop a % of the AC signal so I'm still getting the same 230V RMS AC (325V peak) but chopped (reduced RMS, but same peak). As the previous answer says, it's not enough to put this dimmer at 50% because that is NOT 50% RMS and definitely NOT 50% peak (it's the same peak voltage).

BUT, as the toaster's electronics are so simple and they are mainly resistive heating elements, we just need to get a 50% RMS and don't care much about the peak voltage. So I'm going to put it around 25% duty cycle, which leads to an approximate 50% RMS value -> 115V RMS more or less. I'll check it with a scope able to calculate RMS values before continuous use, of course.

But if this works, is the smallest footprint and cheapest solution I could think off. I didn't want a bulky transformer next to the toaster. This way I can fix the dimmer to a toaster's side and get a reasonable 230V-converted Sunbeam Radiant Control.

Not the answer you're looking for? Browse other questions tagged electrical appliances usa the-netherlands or ask your own question.

1
Control 12V LED circuit and 120V power supply from one switch
2
How can I convert a 120V chandelier to 240V?
0
Can I control two lamps from one pullchain?
2
Can I use an adapter to plug a 230v air conditioner into a 120v outlet?
2
Convert a Hunter Fan (with light) from a wireless remote control to two wall switches
6
Can I convert a 120v circuit to 240v without running new cable?
1
Convert outdoor spotlight from switch control to constant power?
1
How can I convert Single Phase 220v to 2 Phase 120v?