I was looking to run cat6 between my 2 properties for security cameras. It currently has a cable line between the two buildings that was once used for dish network and probably used for cable TV a long time ago. I use it for the cameras now using a passive adapter but the speed is only 2MBs.

I was about to test how easy it was to pull the cable line through the conduit when I discovered a second cable. This appears to be connected to the phone lines but only the blue and blue/white wires were actually connected. It has 12 wires, 8 of which are the standard colors of a cat5/6 wire, the other 4 looked like grey, grey/white, red, red/blue. The line has not been in use for at least 12 years.

What type of cable is this?

Would I be able to use this as a cat5 cable utilizing the 8 wires?

Is there a better way to utilize this cable since it has 12 wires? 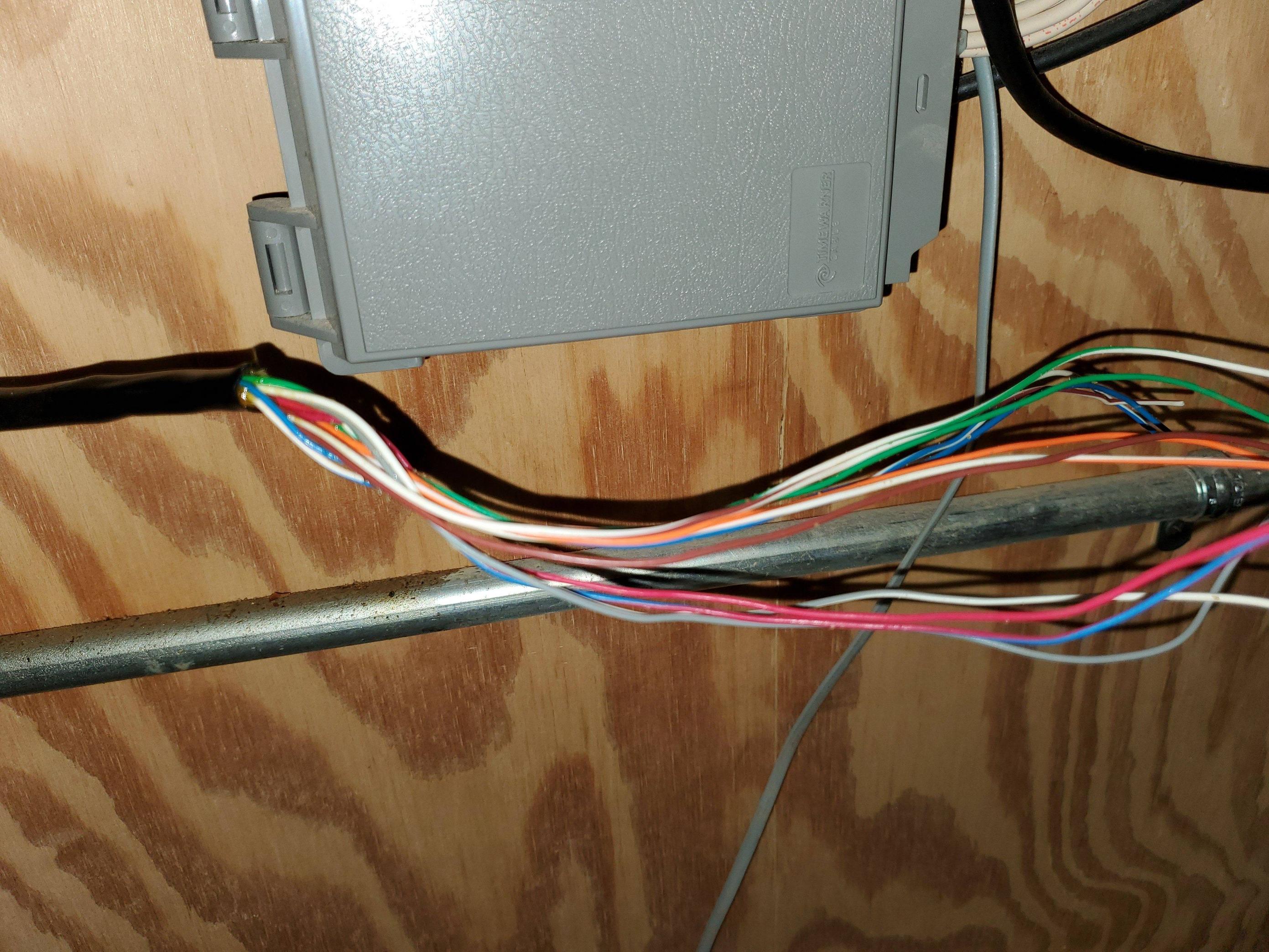 It is probably 6-pair phone cable. Based on the picture, this is almost certainly not CAT-3, as the pairs are not twisted together.

The canonical example of such wire was 25-pair, used throughout phone systems of yesteryear. The catch is that old phone systems used 1 pair for each simultaneous voice connection and then a number of pairs (how it worked varied quite a bit) for very low-speed signaling between the phones and the main unit. If it turns out to actually be CAT-3 then you should be able to get 10 Megabits out of it. If it isn't even CAT-3 then there are various adapters, line drivers, etc. and you should be able to get a couple of Megabits (i.e., similar to DSL speed, though different technology), but not necessarily much better (and possibly worse) than the coax you have now.

As noted in comments, 99.9% likely to be Cat3 telephone cable, and low odds on it being usable for high speed networking. You also have not mentioned a length.

In any case, the correct item to carry high speed network BETWEEN BUILDINGS is fiber optic cable, which gets rid of a whole lot of electrical problems that wires between different buildings are prone to by not being a wire - it can also go fast as blazes, and over long distances.

Not the answer you're looking for? Browse other questions tagged cables or ask your own question.

1
Is this patch panel used for phone, security, or data?
0
Cat5e signal when coiled up
3
Electrical cable between buildings
1
How to turn a cut component video cable into coax?
2
How to fish thermostat cable using an existing cable
4
Cable TV, Antenna, Coaxial - what is this thing?
0
Laying your own telephone cable (from demarcation point)
1
Run a Tunnel on existing Comcast cable?
0
Is it safe to pull CAT6 via old POTS line?