How far into a footing pier should rebar extend from the rock below?

Cottage is on Canadian shield (igneous rock) and unfortunately slopes off where deck footings are being installed. The deck will be secured only to a corner of the cottage and the two furthest footings will be on that sloped rock.

Chiseled squares out of sloped rock using a borrowed Hilti to obtain some flatness. Then drilled four 5 inch holes (16 inches apart) to secure 1/2 inch Rebar with epoxy. Rebar extends out of the rock about 12 inches. Bent all four overlapping & tying the ends together in the center with wire. The bent rebar rests about 4 inches above the rock. Added an additional four 5 inch holes nearer to the center and secured smaller pieces of rebar standing straight up about 4 inches above the rock. Then (in one pour) added a 20"x20" square footing 5 inches thick and another smaller 18"x18" pier (?) 4 inches thick on top.

So i think i have lots of secured rebar but similar to a previous question - there is not much out there on how to. With the one pour does the rebar need to be higher within the concrete? 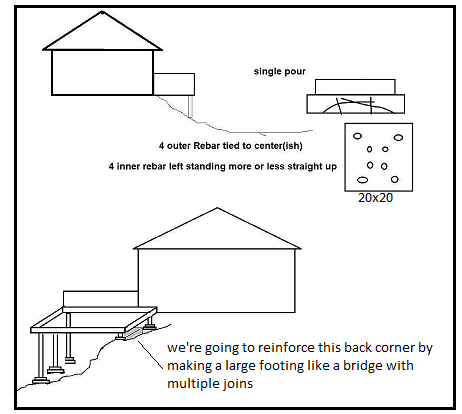 In order to develop full bonding capabilities between concrete and rebar AND to protect reinforcing from corrosion and decay, the ACI (American Concrete Institute) requires a minimum of 2” cover in normal conditions and 3” in corrosive atmospheres. (See ACI 318)

I’d keep the holes drilled perpendicular to the rock, rather than drilled at an angle to keep the concrete from “bouncing” out of the hole no matter which way the concrete (load) moves.

Well, if it's poured & done, you're evidently into the test phase, so this is not really going to help you much unless it fails and you replace it (which seems unlikely.)

Normally you want rebar a few (2-3, depending on conditions) inches deep in the concrete (for corrosion resistance) but otherwise as near the edges as practical, and connected to as much of the mass as practical.

The basic spacing sounds reasonable, but the fact that it's all within the footing is less than optimal for the pier. There are probably few tension loads on the pier, so it's likely to be fine - you've got the footing attached to the bedrock.

Normally you also want to "cage" between your uprights - tying the bent-over bars in the middle is probably doing the least they can do for you, but you didn't cut them long enough to bend over and reach the next corner, and you don't mention bending and tying any other rebar in that position, or adding mesh. Whether doing a single pour or two pours, it's good practice to have rebar sticking up from the base into the pier, though your pier is rather short. So having it stick up 4" when the pier starts at 5 inches and tops out at 9 inches is less than ideal.

When anchoring to rock, I prefer to drill at slight angles so the rods cannot be pulled straight out as a set once the concrete is poured, regardless of epoxy or grout holding them in the holes.

Not the answer you're looking for? Browse other questions tagged footings rebar or ask your own question.

4
How do I determine the correct rise of a step for a concrete footing on a slope?
5
How should I build the concrete footings for my deck?
5
Should I pour a footing and pier at the same time?
0
How far does a ground rod need to be from the foundation?
0
How to drill to insert rebar into a large rock (5mx5mx5m)
0
How can I prevent decay in a deck post resting on the house footing?
0
Hammering a rebar into the ground without bending it
1
Removal of the cardboard pier footing forms in the crawlspace - how to do it?
3
How to prevent rebar from rusting in the ground?
2
How can I keep a rod vertical as I drive it into the ground?