Running cables for a home theater: inside walls and ceilings or on the surface?

I am trying to set-up a home theater in my ill-equipped living room. After spending the last three days watching YouTube videos on routing cables, I did learn a lot, but got into a state of analysis paralysis in which I can't make any decision besides keep looking at more videos. I hope by posting here I can get some good recommendation that push me towards action

I am planning on setting up a 5.1.4 Dolby Atmos configuration with 6 speakers near the front of the room room (2 surround, 1 center, 1 sub, 2 ceiling reflective atmos placed on top of the two surround) and 4 near the back (the other 2 Atmos actually in the ceiling and the 2 back surround). I live in the second floor of a 3-floor condo, so obviously there is no attic. And wall and ceiling are fully finished. I am debating between the two main options of where to put the AV receiver, but the actual issue is how to run the wires:

CONS: I need to bring 6 speaker cables to the front of the room. 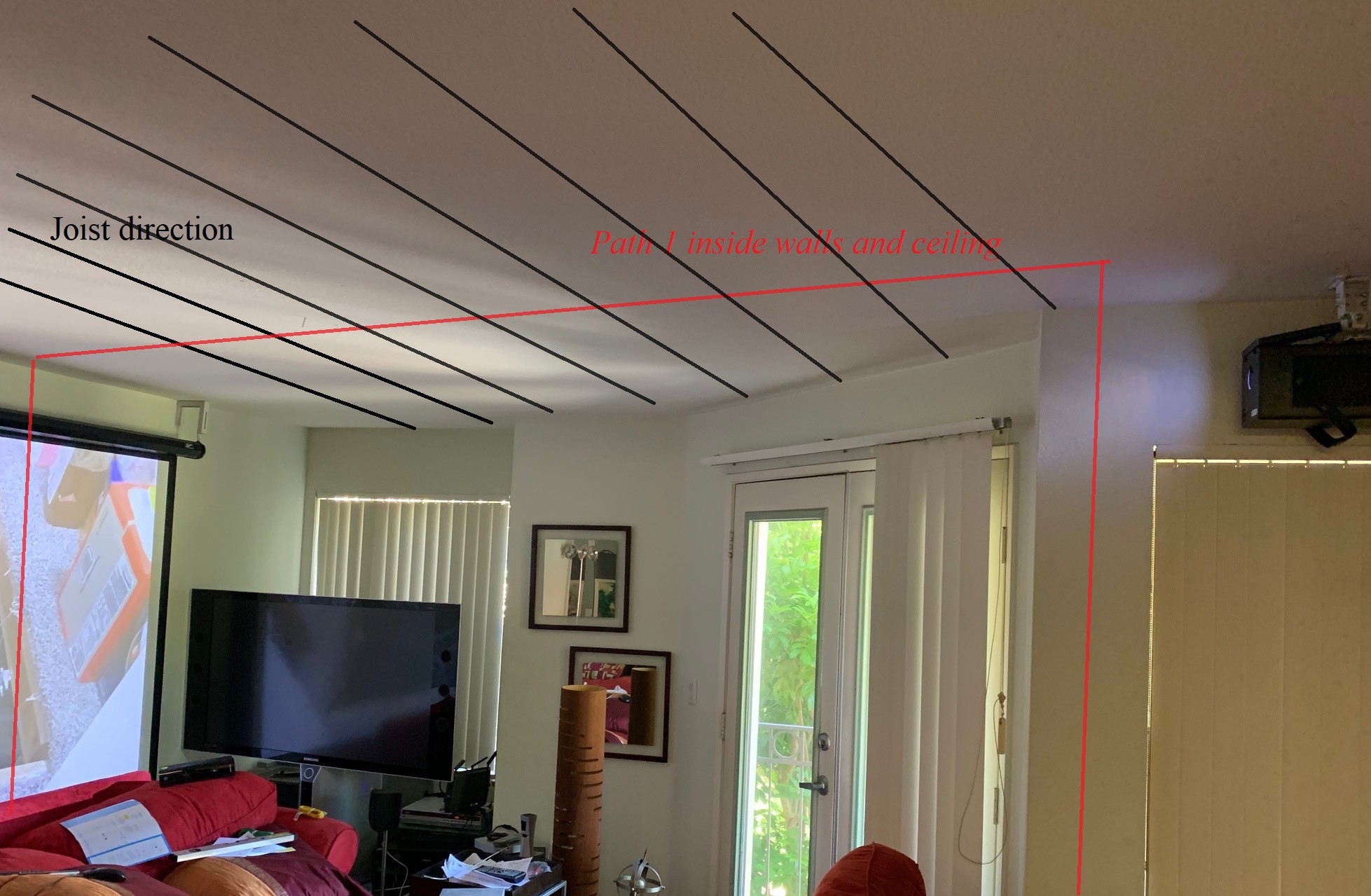 Unfortunately the straightest path, shown in the first picture, is perpendicular to the direction of the joists and to fish the wire in the ceiling I would have to drill through seven joists, opening seven holes below them, including a big one in the back wall. I would tend to exclude this solution because the patching would be very visible, due to the bad combination of my poor skills and the light texturing of the ceiling .

Other possible options are: using 6 thin speaker wires glued to the ceiling on a straight line (i.e., following the red line but on the surface) or using plastic raceways along the longer route of the irregular perimeter of the ceiling/wall junction. 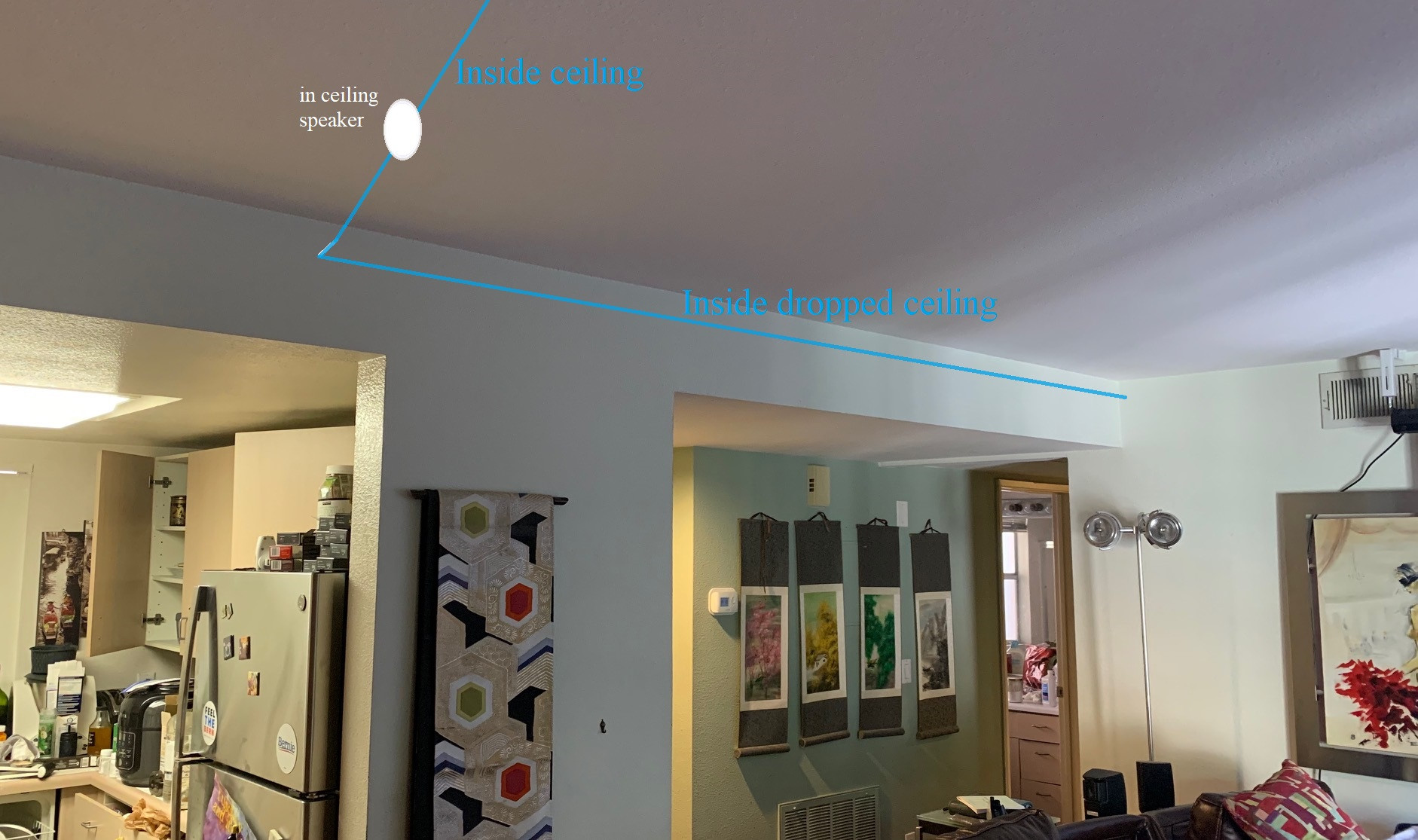 The interesting thing is that on this side, as shown in the second photo, there is a dropped ceiling throughout the whole length, from the front wall to the back wall. One the positive side, the path inside the dropped ceiling to the back wall should be free of joists. However I am not sure what is in there, if I am allowed to run cables through it (a little online research gave me the impression that I could, using CMP rated wires, but not sure if it is also advisable). Also, if I did that, I would need to fish wires from so far below them that, just to start, I would not be sure of what to do to create that initial 90 degree turn with the cables above the real ceiling.

And the options are the same: either running thin speaker wires glued to the ceiling, using plastic raceways, or fishing inside the real ceiling and the dropped ceiling on the other side.

None of these options seems that great. What would you guys do?

Thank you very much for any suggestions you would be kind enough to give me.

This problem is most easily addressed by surface mount wireway. Rather than run exposed cables, you attach a fairly innocuous plastic or metal rectangular cross section wireway/duct/conduit that carries the cables across the ceiling and/or wall in a less obtrusive way than putting them out in the open, but which does not require major surgery to the building to install them. While you evidently don't like the ones you have seen so far, there are many options at many quality and appearance levels, so there may be hope that you can find one you like. Or get all 1970's retro and attach some hollow fake beams to the ceiling.

Where more convenient, there are also similar products made to go on the floor, typically with small ramps on either side so they are less of a tripping hazard.

Adding some sizable crown molding all around would be another approach to create hidden surface wire space along the edges of the ceiling, if that suits your taste better.

Not the answer you're looking for? Browse other questions tagged wiring ceiling joists home-theater speakers or ask your own question.

5
How should I run speaker, HDMI and electrical wiring for my ceiling mounted projector theater room?
2
What type of equipment do I need to complete this audio setup?
1
Running audio wire in office, wall or ceiling location?
1
How do I identify the speaker setup for these ten in-home speakers?
1
How to wire ceiling speakers where each pair of speakers has only two wires total
1
Speaker wall plate wiring
7
Can I mix AV and Power cables in the same raceway?