I am working on a plan for a kitchen remodel. The existing range is natural gas powered so it doesn't have a dedicated circuit (It's just plugged into a 15 or 20amp outlet). Other existing wiring includes a dedicated microwave circuit (15amp breaker but need to check wire gauge). This one I suppose can be used for the fridge (since the fridge currently doesn't seem to have a dedicated breaker).

The oven/microwave combination model I am looking at is KitchenAid KOCE500EBS (KOCE500E model, the BS is just a color code) or similar. The installation manual has these electrical requirements. 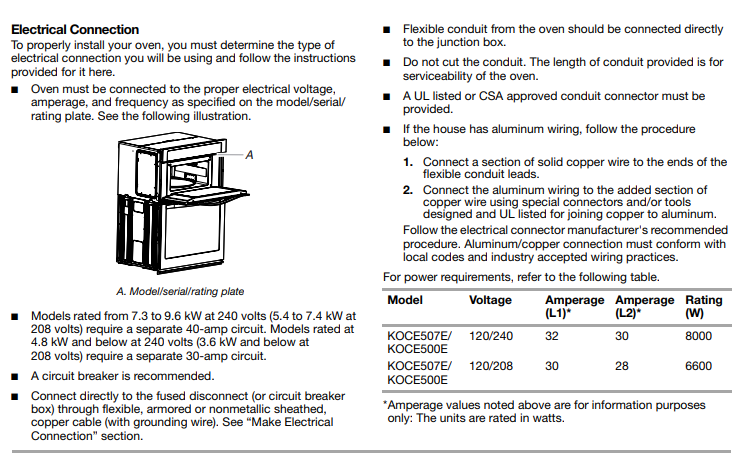 My breaker box has a 200A main breaker but I am basically out of room. There is a sub-panel wired right next to it (with a 40A double breaker) that I added for laundry and it has room for 4 single breakers.

What options do I have here? I'm thinking the best approach would be to offload a couple of 15amp circuits marked with red rectangle on the photo (provided I have enough slack - which I should for those bottom breakers) and wire them into a sub-panel. This would free up 2 neighboring boxes in the main panel for a double 40A breaker. Is this a good solution? If I cannot relocate those two 15amp breakers, can I wire for the oven from the sub-panel or do I need to beef up the sub-panel circuit (and by how much), since it already has washer/dryer? Should I be using an 8 AWG or 6 AWG wire to cover me for any future upgrades (say double oven)?

Thanks so much! Dave

The photos of the panels are shown below. 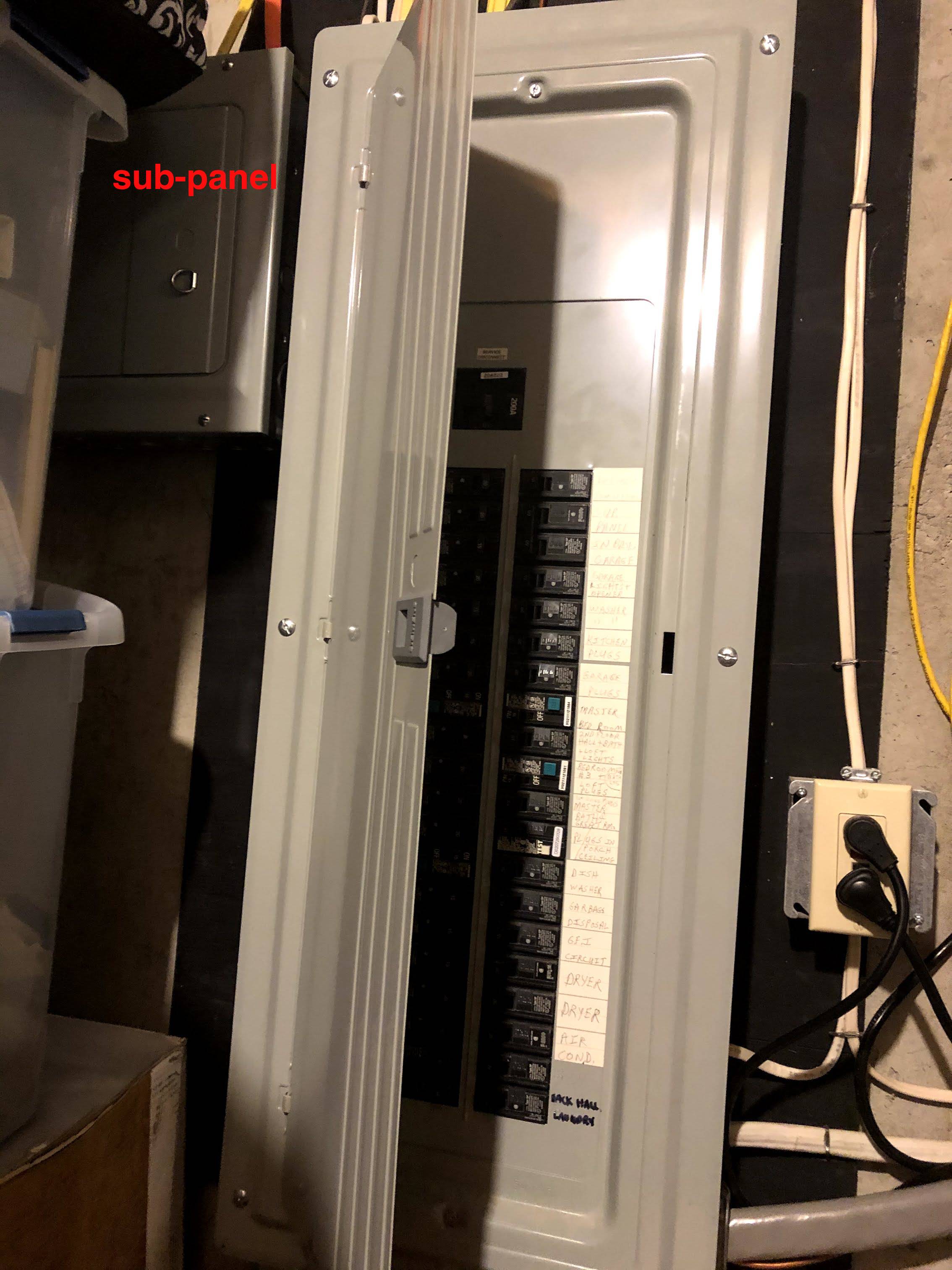 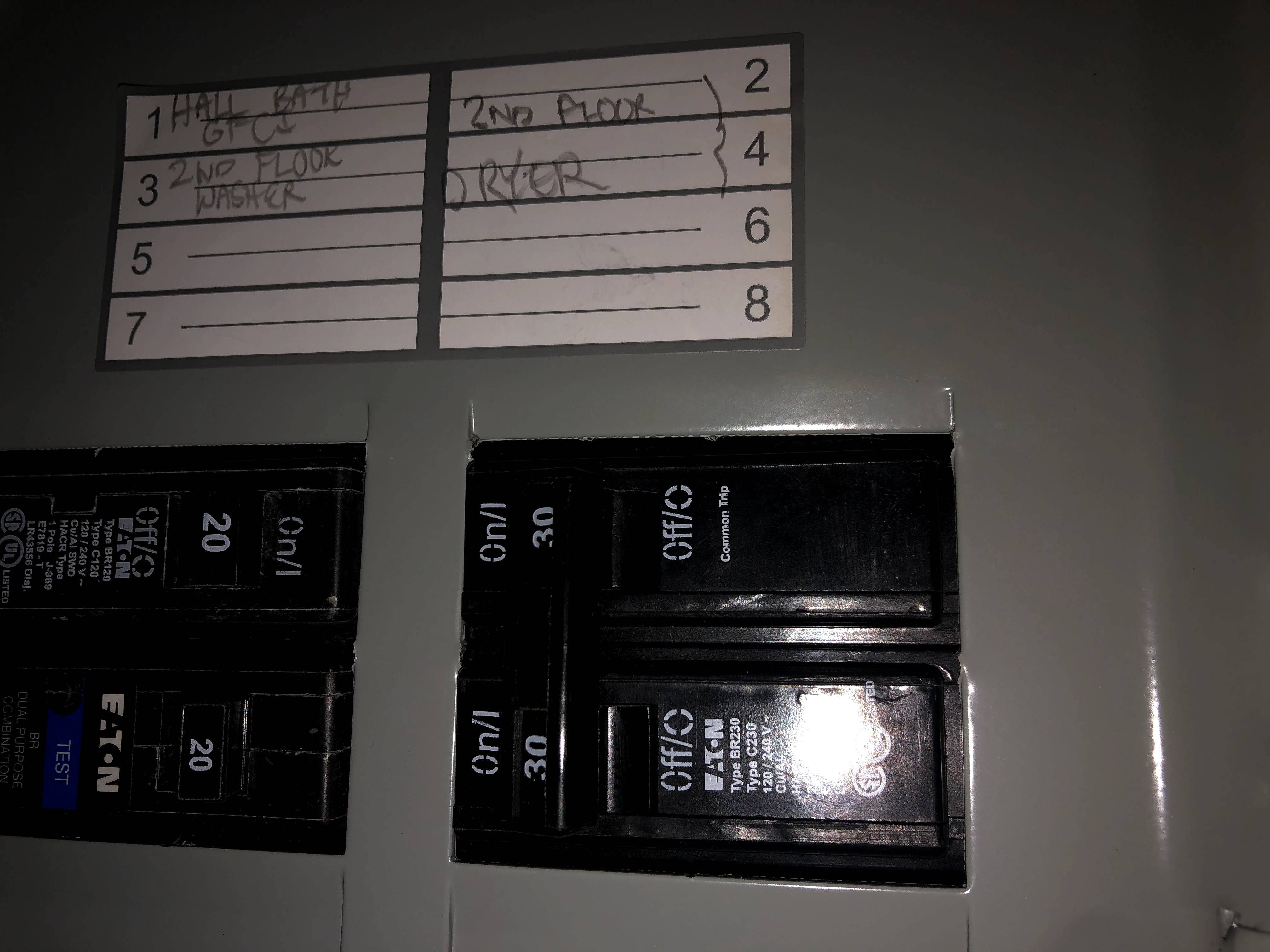 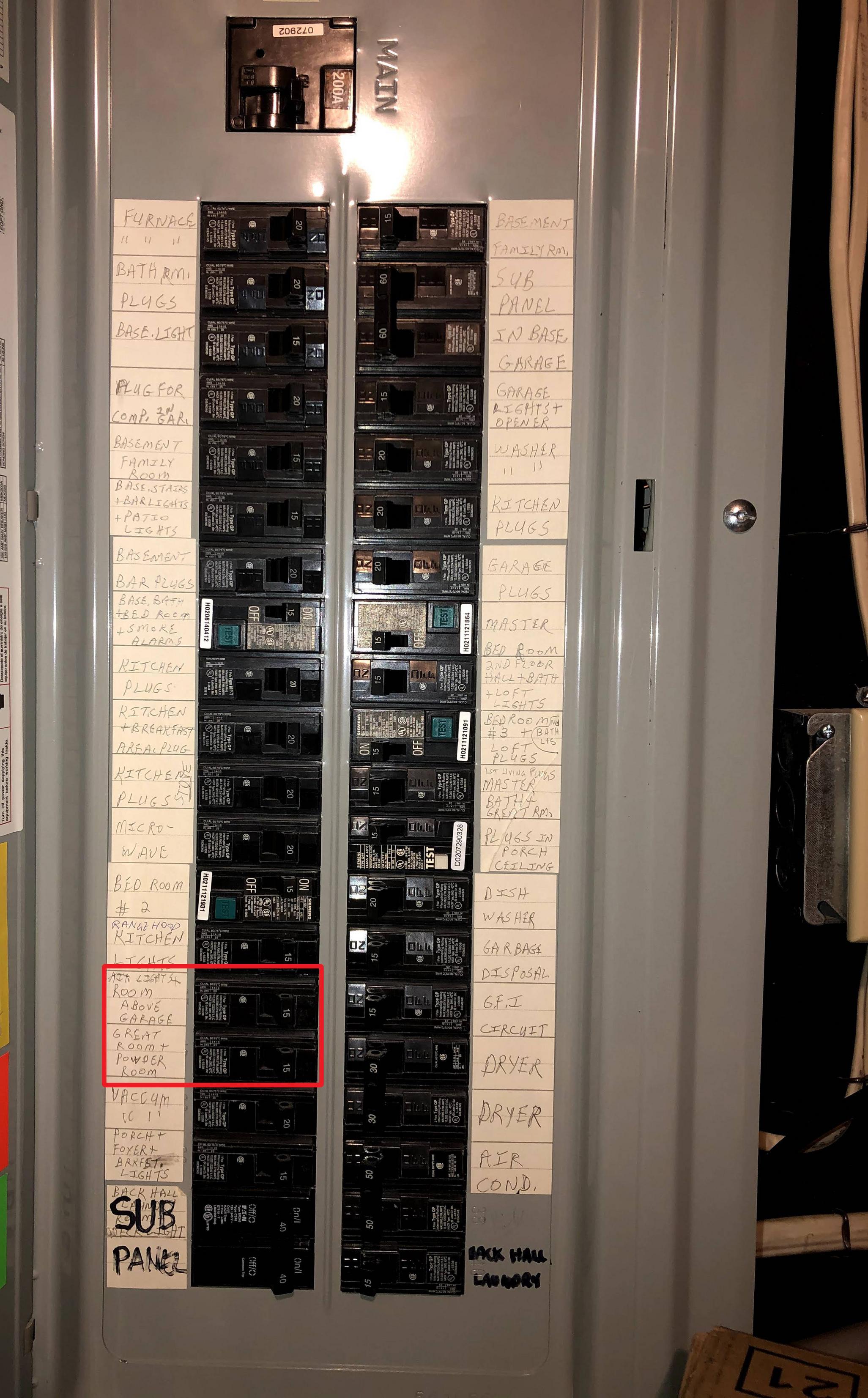 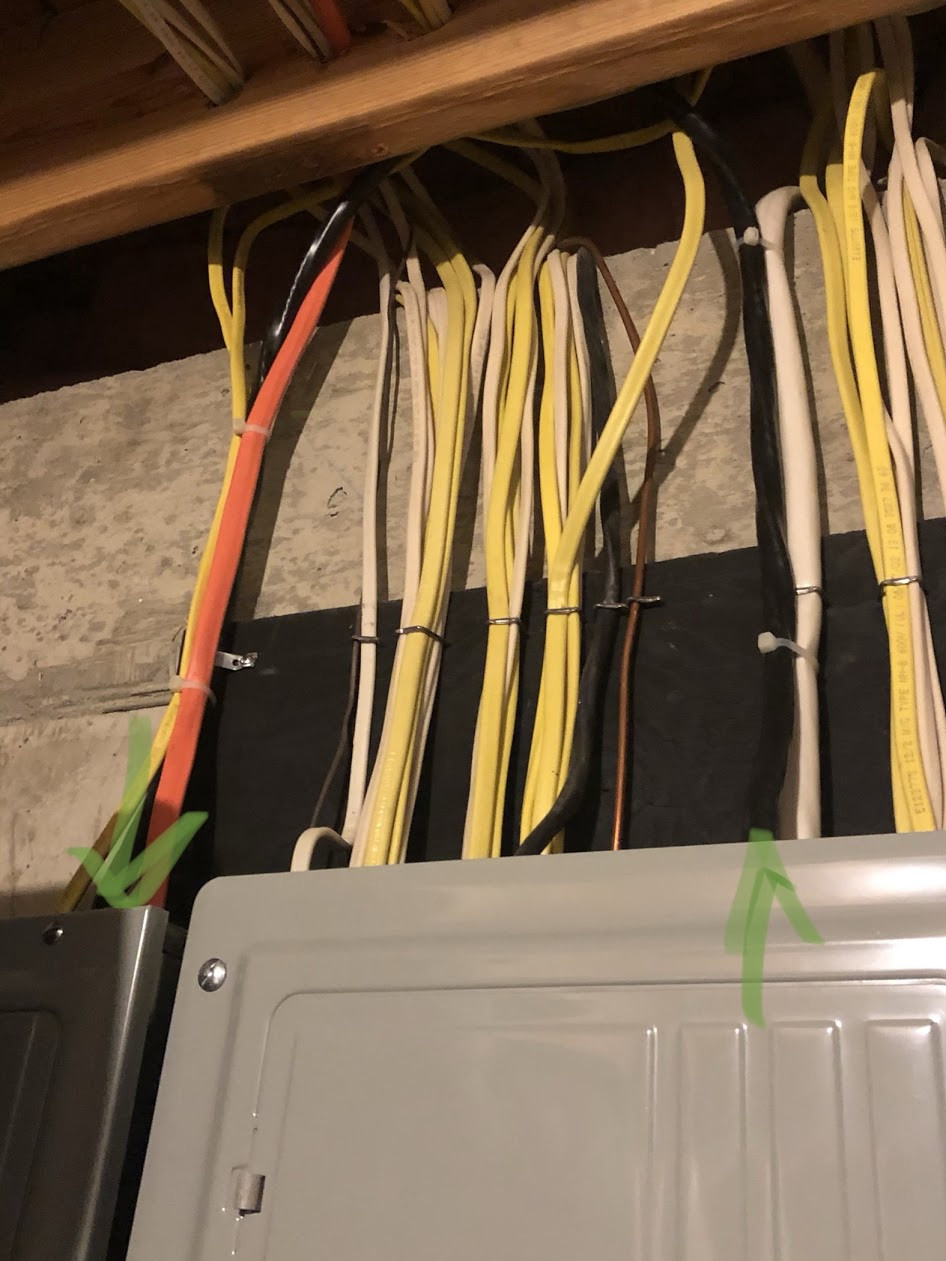 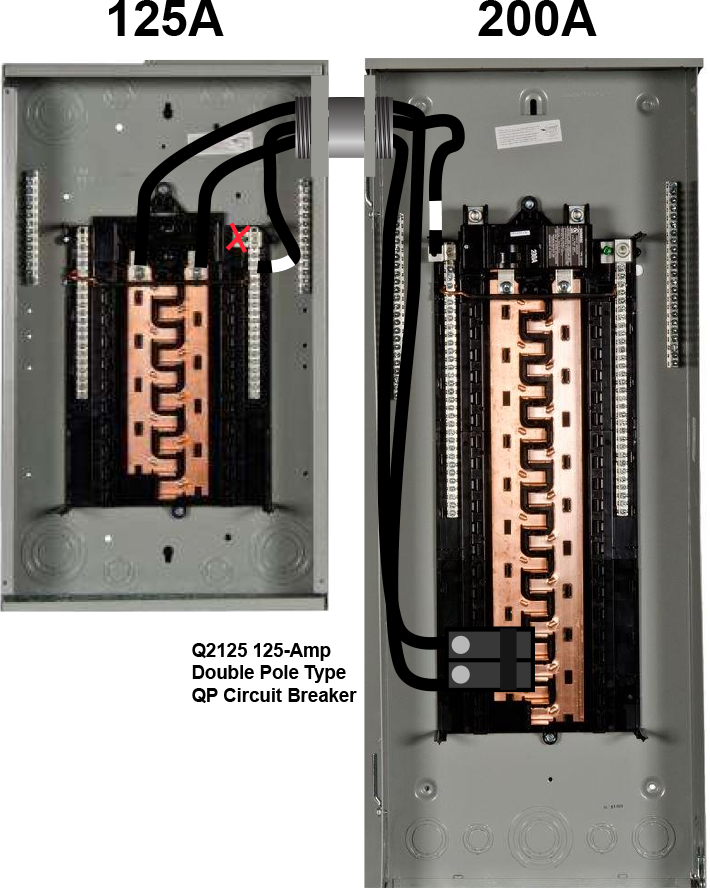 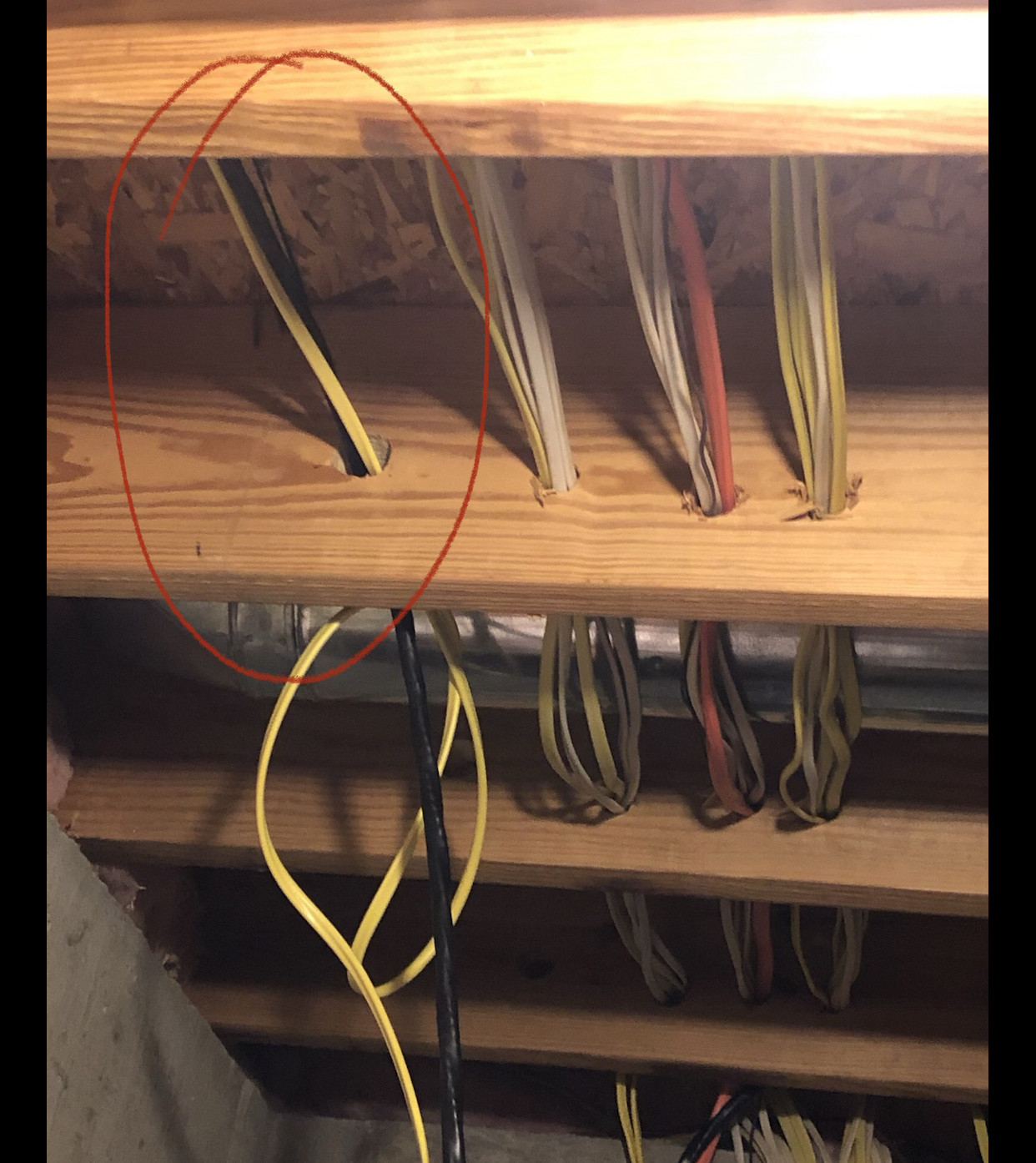 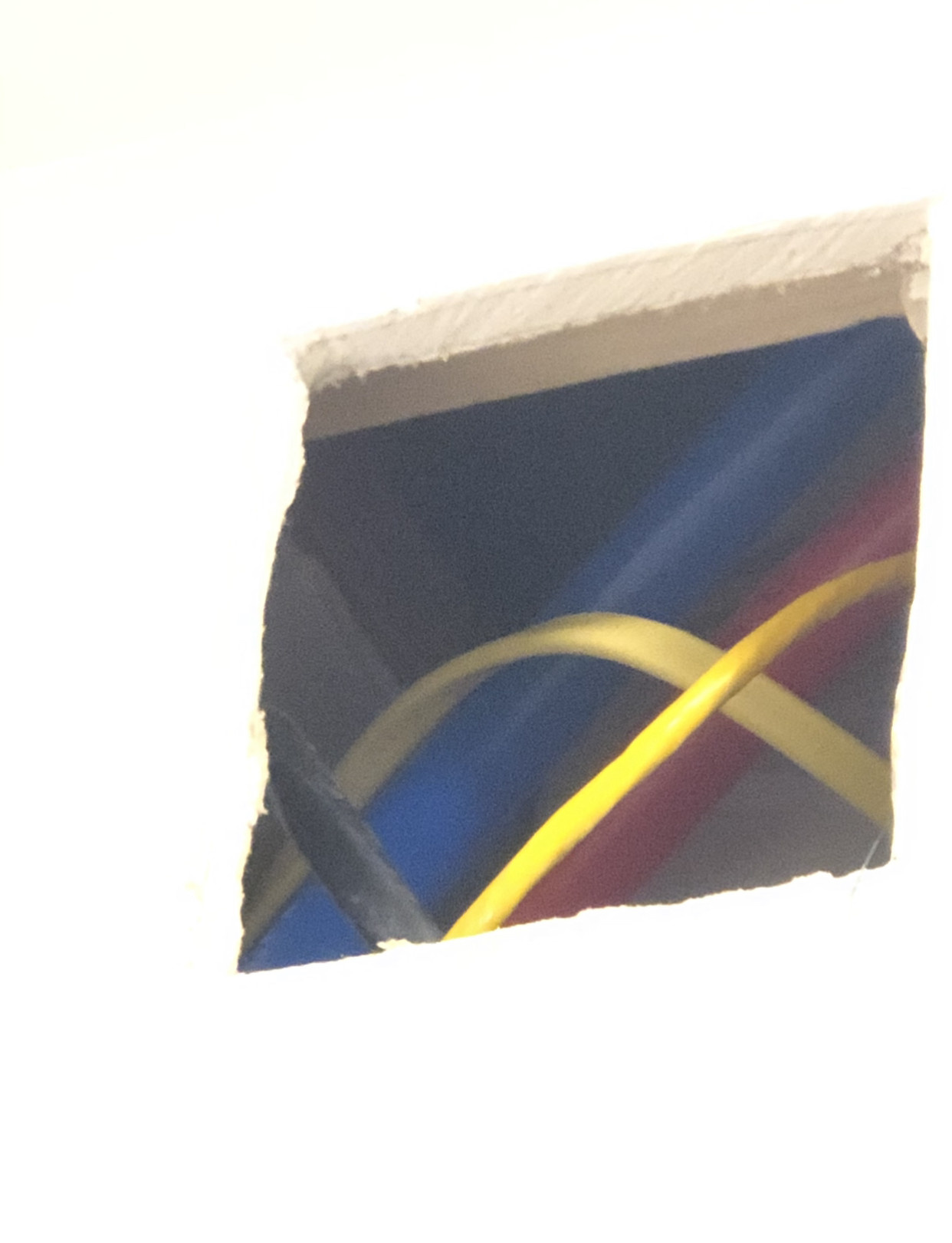 Upgrade that tiny sub-panel. For under $200 you should be able to get a 30-space Eaton panel that will let you re-use all the breakers in your existing 8-space Eaton panel, plus wire and sub-feed lugs for your Siemens main panel. Speaking of which, that BR240 breaker in your main panel that feeds the pictured sub-panel is an alien - it does not belong in there. It may seem to fit, but bus stabs and breaker jaws have subtly different shapes and mixing incompatible types can lead to arcing and bus damage. If you keep the sub-panel as is, you need to replace that with a QP240.

Note, if you replace your sub-panel with a bigger Eaton unit, you can recycle that BR240 by moving it into the sub-panel and use it to feed the new oven.

Wow, whoever installed that subpanel was just trying to get paid. Did not do you any favors at all.

It would have added less than $20 to that job to give you a 20-space and a 70A feed, that you could’ve done something with. As it is, the panel is “maxed out”, even overloaded, with washer/dryer going at once.

I don’t understand why you have two washer/dryers. If that is a separate tenancy, there are a moose-pile of other issues that should be considered prior to any panel upgrade.

Since you’re game to add a panel...

Let’s upgrade the panel you already have. This is easy-peasy, since this is surface-mount stuff in unfinished areas of the home.

First, move that junk out of the mandatory 30x36” working space and it never returns. Now, I bet that panel is connected to the main panel through a short EMT “nipple”. That’s the way to do it, but you’ll want larger pipe - like 1” trade size (about 1-1/8” size if EMT) or even 1-1/2” if the holes are present and will line up.

So shut off that 40A breaker, pull the branch circuits entirely out of the existing panel and carefully tuck them out of the way. Undo that EMT nipple, un-fish the #8?#10? wires, and remove that panel from the wall.

Now get yourself a 30-space or 40-space main-lug panel. The breakers currently in your Eaton panel are $20 to replace, so you could go Eaton BR to preserve that “investment”. Other than that, I’m a big Siemens fan, both because they’re the same breakers in your main panel so you can just move them over... and because Siemens makes a dirt cheap generator interlock should you ever have the fancy. Make sure it comes with/buy accessory ground bars; can’t use neutral for ground in a subpanel.

Use a big conduit “nipple” between the panels (and if the holes line up, several additional little ones are always nice). Use metal as that automagically takes care of grounding.

With the new panel mounted, reconnect all the existing wires and cables exactly as before, and get your upstairs laundry room powered back up. Everything is the same except now you have 22/32 more spaces than you had before.

I created this as a “break point” - you are back up to full functionality (as was before) and under no time pressure to do what follows. Better, the old work is a template for how to do the new work.

Now, one wire at a time, replace the 3 existing THHN/XHHW wires with

These wires typically come black. Use tape to re-mark the neutral wire with white tape.

Once all wires are replaced, you can power up that breaker. Now we have plenty of room in the subpanel, both in spaces and amps, and can rearrange as needed.

Another natural breakpoint. From here on out, you can move circuits around one at a time.

If you have a mind to “generator” in the future, move circuits you’d want on generator to the new panel, but reserve the top 4 spaces for the generator interlock. Also leave enough slack in the #3-#0 cable that it can reach a branch circuit breaker in the top 2 spaces, instead of the lugs.

Now, about that kitchen...

From the data you clipped off the instruction manual, it basically says “See nameplate” which you didn’t show. But we can make an educated guess.

First, a PSA for running 1” conduit between panel and the kitchen range/oven area, as a gift to your future self / future other homeowner. This lets you run whatever the future needs will be, up to 3 circuits. Further, since wires are allowed to run hotter in conduit, you can get more ampacity from smaller wires - for instance #8 is good for 50A in conduit, so a #8 run handles any future range/oven.

Code requires at least about 7 circuits for a kitchen these days. I always laugh when people build ADUs (in-law apartments) and they fit a 12-space panel.

However, you’d be doing yourself and the chef a favor if you also

I have a couple of ideas: First is the "get by". Second is "prep for the future".

The "get by" options: Get 2 15 amp tandem (double stuff) breakers, remove the 4 15 amp breakers next to each other (red box in your pic) and move the circuits to the new tandem breakers. That would free up 2 spots for your range circuit. You might also be able to combine a couple of lightly loaded circuits, but I don't recommend that.

The "prep for the future" option: Replace that small sub-panel with a much larger one and upsize the wiring and breaker to it. Sub-panels aren't that expensive and with such a short run from the main panel, wiring cost would be low as well. That's my recommended approach. A kitchen remodel is a decent sized project and adding a few hundred bucks to properly support it as well as other expansions is money well spent. You didn't say if you were planning on doing the work yourself or hiring an electrician, so that will affect the price of course.

The more I think about it as I write this I'm strongly recommending replacing the sub-panel and it's feed to something much larger.

Not the answer you're looking for? Browse other questions tagged electrical wiring kitchens appliances 240v or ask your own question.

2
Updating sub panel in shed
0
Combining wires from two breakers to one appliance?
3
Wiring for new 40 amp wall oven and cooktop
0
Convert 220v dedicated oven connection to 110v receptacle?
1
How can I best balance current loads among my existing kitchen circuits?
0
Is it possible to get 240v from one 15amp breaker?
1
Sub Panel selection/configuration
0
Design for 40A max continuous EV circuit on sub-panel