This is something I got curious about in the course of diagnosing this issue.

Our washing machine has a couple of electronically controlled valves on its intake (I believe they're called "solenoid valves"). Based on observing the flow of water into the block above the detergent/conditioner drawer, they each appear to be able to function in two modes:

Each valve seems to be used in both modes at some point in the longer machine programmes. Typically both are opened fully simultaneously to fill for the final rinse.

When I first saw the "trickle" being used, I initially assumed the valves must be sticking, but it's used with exactly the same timings each cycle and seems to be quite intentional.

Googling around finds me a lot of replacement parts for sale, but I cannot find any concrete specifications for any of them which would actually answer the above!

Here's a picture (the machine is an AEG L69480VFL, but the parts for most machines look so similar I'm guessing they all operate in a similar manner). 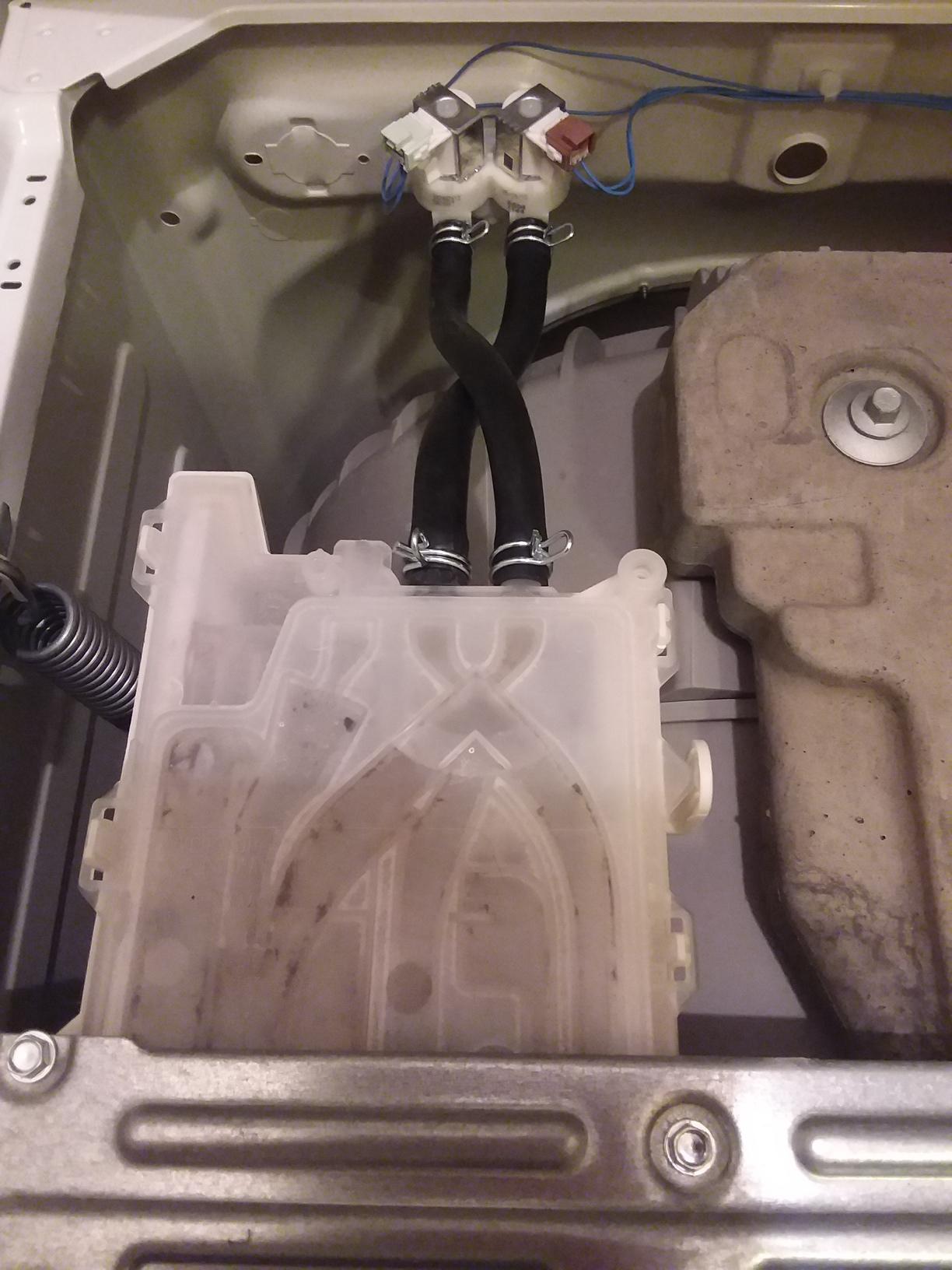 Update: I found an image on a spare parts site of what I am pretty sure is the same valve. I think that makes it clear what the voltage is: AC mains level. Although, if it is AC, that makes it more mysterious how each valve seems to be able to support two different flow levels though. (Will definitely now take this one to Elec.Eng SE, as suggested in comments below). 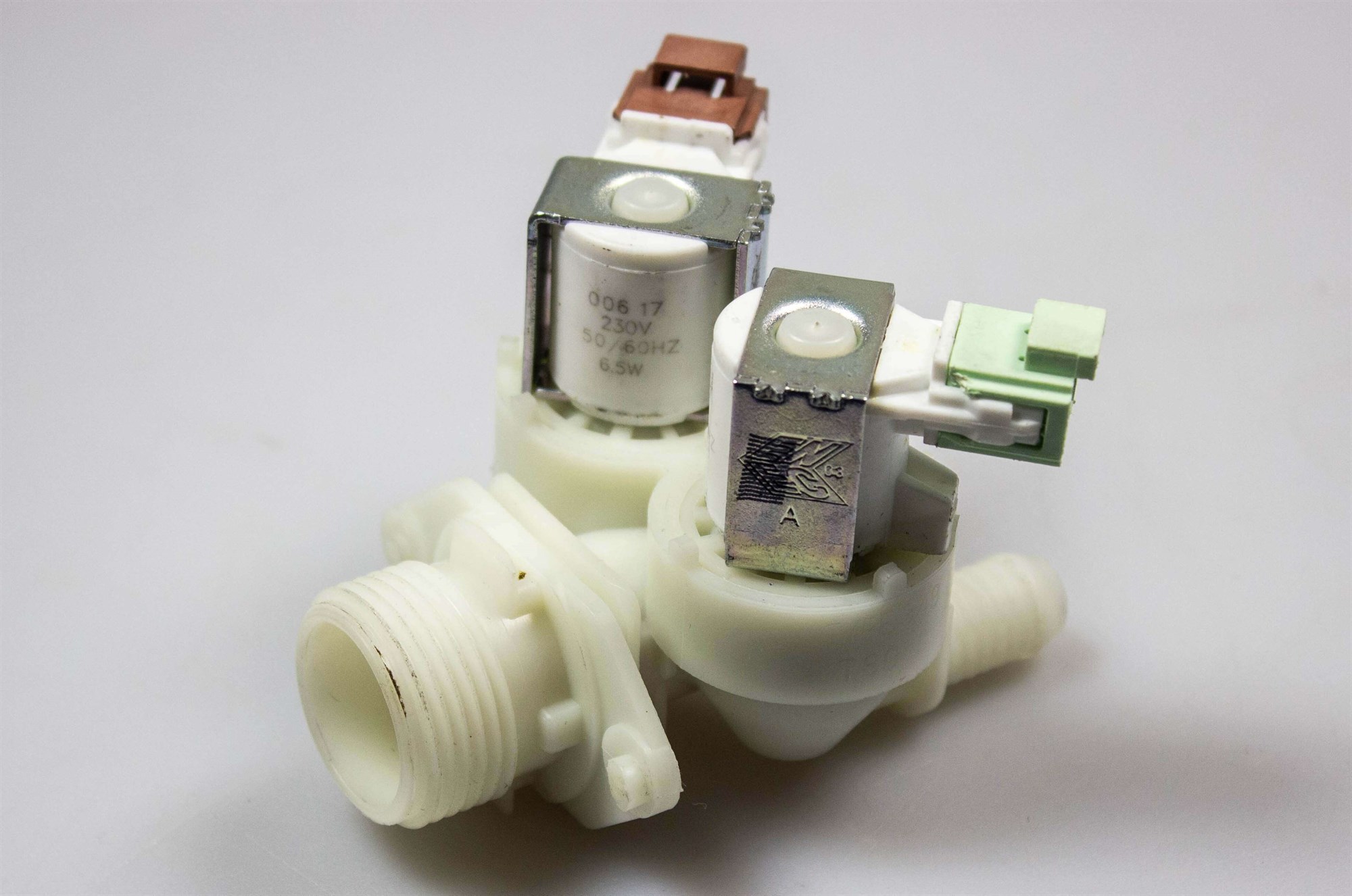 Update: In response to a comment on an answer below...

The pattern of valve operation on the machine's shortest wash cycle is (left/right as looking at the machine from the front):

On longer cycles, the left hand green topped valve also seems to used in partially open "trickle mode" at one point but I forget exactly when in the cycle; possibly it was used as an initial stage to wet/"pre-wash" the load before using the full flow which would draw in detergent.

I just grabbed one of these out of a scrap machine for a project and discovered one side does indeed 'trickle'.

If you pull off the black hoses, one outlet has a little flow restrictor/regulator pill pressed into it and the other one doesn't.

Additionally there's an inlet flow regulator (a rubber disk which flexes to block the flow) behind the filter mesh, presumably to keep everything predictable regardless of mains pressure.

I extracted the trickle side restrictor using a woodscrew like a corkscrew if anyone was wondering.

It's difficult for me to imagine that these valves are truly intended to operate in the "full bore" and "trickle" modes you described. I think it's more likely that the "trickle" mode is actually a malfunction.

After reading a little about the differences in operation between direct-acting solenoid valves and pilot-operated solenoid valves at Burkert and at Instrumentation Tools, and also reading your linked question, I'll venture to guess that the valves in your machine are pilot-operated and that your water supply pressure is sometimes so low that the pilot operation fails. Maybe the water pressure vs spring is so low that the main valve opens only partially, or even not at all and the trickle is just what flows through the pilot.

The situation mentioned in that linked question, in which a flow-activated pump is installed to feed the washing machine, is interesting. But I think it's consistent with the theory above. As the pump is flow-activated, it does not provide any boost in pressure until after the valve has opened enough to allow sufficient flow. Thus the pump does not provide any additional pressure at the time the valve should transition from closed to open, and in fact probably is a pressure loss, further impairing the ability of the valve to open in the first place.

Not the answer you're looking for? Browse other questions tagged washing-machine valve or ask your own question.