Am I ready to install window framing in load bearing wall?

I'm looking to add a window to an exterior, load-bearing wall. In front of the wall (which rests on the foundation) is another "wall" framed for wood paneling.

I need to cut through the studs A and B on the outside wall to add a header and the rest of the framing.

My plan is to cut studs A and B, add the header and jack studs to the outside wall, then once that is in I can cut out the opening in the inside wall. 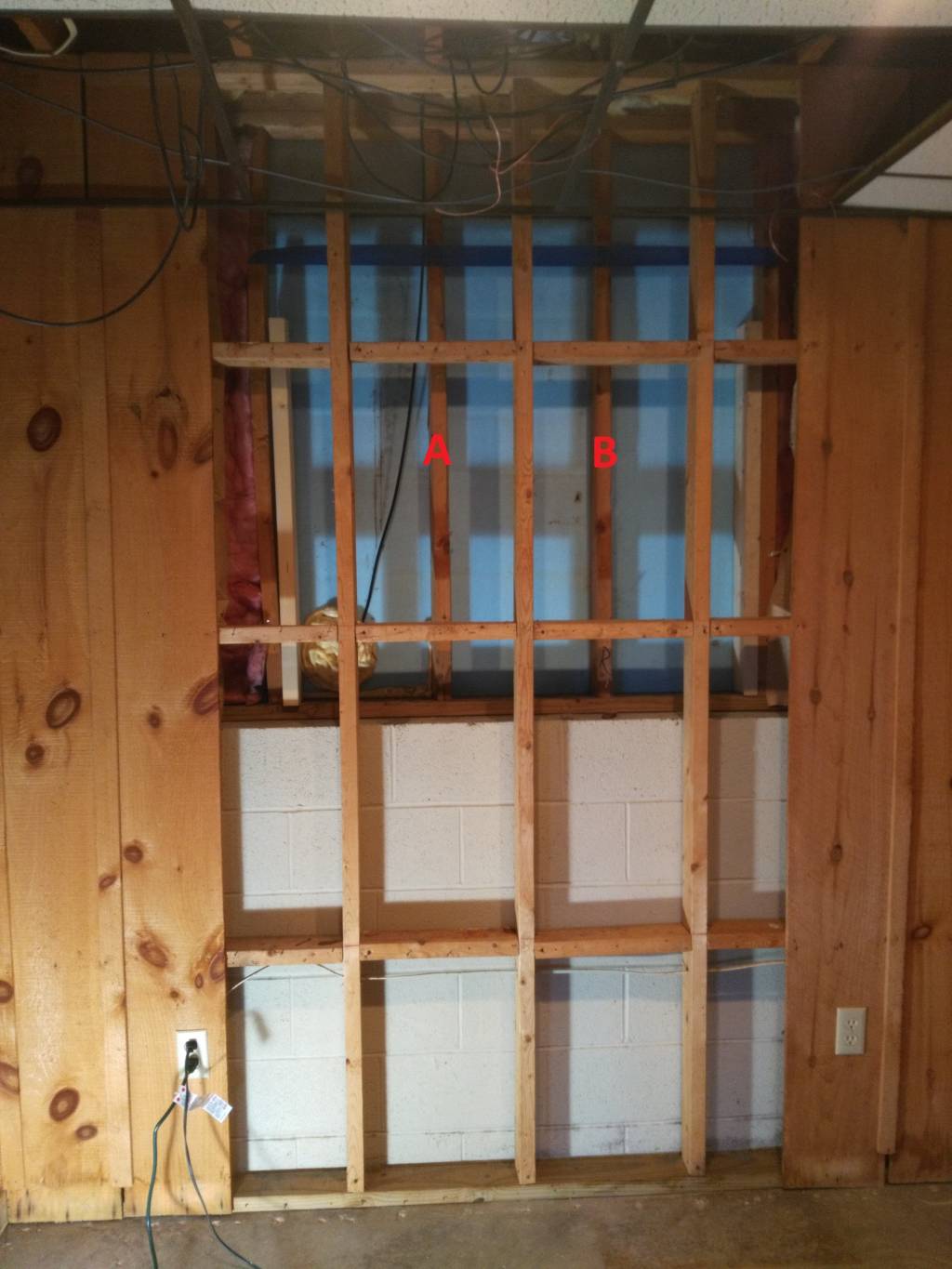 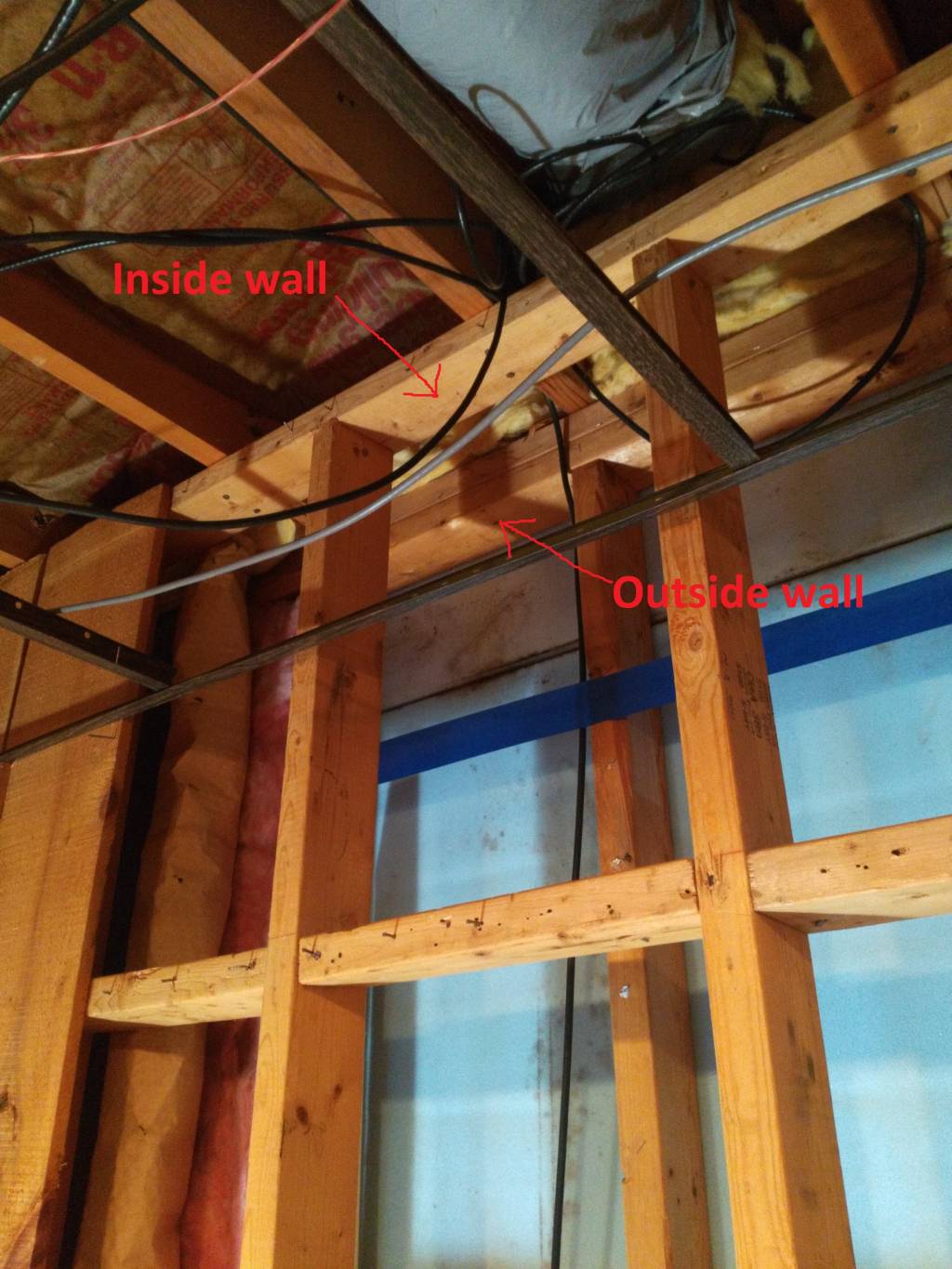 Firstly, I've done what you're doing many times. It will work just fine. A framed structure is a system, and there's a lot more supporting those joists than you might think. Mentally step through everything that they're connected to and you'll realize that you can almost take the studs out without doing anything else, even without your inner wall.

Now, FreeMan makes a good point about the studs on the inner wall not aligning with the joists, but not quite like he thinks. Joists needn't align with studs below if there's a doubled top plate. That's where your inner wall is lacking.

Fortunately, a solution is simple. Slap three temporary studs against the inner wall, flat, directly under the joists that will be unsupported by the outer wall. They'll run from the concrete to the underside of the joist. Nail them to the inner wall at the top, middle, and bottom and carry on. Everything else is well supported by the foundation wall. The temporary studs rest on the slab, which in turn rests on the footing below (or very close to it). All good.

I am NOT a structural engineer, nor even one of the "framing experts" mentioned in a comment on the OP. This is my "common sense" recommendation based on what I would do if this were my house and I didn't want to die during the process and/or cause long term damage to the floor above. I am the "official" random guy on the internet giving advice. My claim to fame is that I build a garage myself 25 years ago and it has had zero structural issues since.

Your inner wall is bearing absolutely zero weight of the joists above and should _not_ be counted on to do so once you cut out your studs "A" and "B".

Note that on the exterior wall, you've got a stud directly below each floor joist above and a doubled top plate, while on the inner wall, you've got studs splitting the distance between the joists and only a single top plate. As you cut studs in the bearing wall, the joists that are sitting on them will be supported only by a 14.5" stretch of 2x material on the 1.5" direction. i.e., they won't have much support at all.

As the weight of the joist begins to bear on that single top plate, the plate will start to bow down, causing the studs to bow outward. The horizontal blocking will help resist that, but is likely not sufficient.

I would remove some more of the interior wood paneling so you can recruit a couple more studs on each side of the opening, then put up a doubled 2x8 or 2x10 (I'd go with a 2x10, even if the wife rolled her eyes at me) temporary header across the opening you're planning on cutting. Nail this into the inner wall studs with a course of 3 16d framing nails into each stud. You can use duplex nails* to make it easier to pull them when you're done with the temporary work.

I'd also put down a floor plate and add studs (16" OC) directly below the temporary header - this will provide direct support for the header and help resist any desire for the inner wall studs to twist under a load applied to their sides. For these temporary studs, I'd put them directly in line with the joists above. However, for the area where you need to work on the outer wall, that would leave you only 8" gaps, so in this area you could leave them out (in the span between your 3 currently exposed inner wall studs) and count on the header to carry the weight across.

I don't know any exact formulas for this, but if it was my house, I'd want a minimum of 3 studs to the left of "A" and 3 to the right of "B" (the temp header should, of course, span between "A" and "B", as well). It may end up being overkill, but that's far better than "under kill zone" which is what would likely happen to you if those joists start to come down.

You may have to remove some of the drop ceiling hangars to get that temporary header up there, but that's a small price to pay for ensuring the floor above stays above.

I presume that you're also going to be cutting an opening in the interior wall to let light/air in and to allow emergency egress (not much point in putting a window in just to cover it with a wall, is there?) I'd go ahead and cut and frame the opening in the inner wall while you've got all the temporary bracing in place. It's not necessary, since that inner wall isn't load bearing, but that header across the top will hold the studs in place while you cut them and re-frame the opening.

*Duplex nails have 2 heads on them. You drive it until the first head contacts the surface of the board, leaving the 2nd head sticking up ~1/4". Later, when it's time to remove the nails, you can easily get the claw of your hammer under that 2nd head to pull it out. They are designed and used for temporary work, just like this.

Not the answer you're looking for? Browse other questions tagged windows framing studs load-bearing or ask your own question.