I have a 15 year old Capital Performance Series gas range, model number PSGR304. This is a cheap relative of a commercial-style DCS range without any electronic controls, timers, etc.

Lately it has been behaving strangely so I took off the covers to investigate and here is what I found after repeated tests:

Nothing I found online so far addresses this combination of issues, everything assumes a binary failure (shorted safety valve, bad ignitor etc). In my case, the sequence of events seems to rule out a complete failure of all three active components (ignitor, thermostat, safety valve) as well as a blocked orifice or burner holes.

Can anyone please suggest a way to identify the root cause of all this? Thanks!

Could be a cracked ignitor element, letting through enough current to open the gas valve until it gets even hotter, then the crack widens and the gas valve closes.

Could be a faulty valve, and the valve throat is blocked by debris or broken part (as opposed to valve coil is broken).

You can distinguish between those cases by reading the voltage across the valve terminals while the oven tries to start. A steady rise in voltage with no spikes or dropouts means the ignitor is OK.

Sometimes you can detect a cracked ignitor element by direct inspection -- it will have an obvious hot spot, which often looks like the element is burning.

If you can't see the ignitor or measure the voltage, you could try replacing the ignitor. It's the cheapest part, and any replacement is cheaper than calling a licensed repairman.

While I appreciate the response from A. I. Breveleri, it still left me wondering why exactly the specific behavior I described was happening. I therefore kept digging on the internets until I finally got past all the how-to-fix-it advice to a plausible explanation of how-it-works (and why it doesn't when it doesn't).

The key misconceptions I had were [a] when conductors are heated their resistance to electric current flow increases (this is true for cables and transmission lines) and [b] there are electronic parts involved in opening the gas valve which means that it's either open or not.

First, the ignitor. It typically (but not exclusively) uses silicon carbide [SiC] as a heating element (https://en.wikipedia.org/wiki/Silicon_carbide). This is an exteremly hard and durable ceramic-type material (think harder than exterior grade porcelain tile) about which https://matmatch.com/learn/material/faq-silicon-carbide says "Silicon carbide, in its pure form, behaves as an electrical insulator. However, with the controlled addition of impurities or doping agents, and because SiC has the necessary resistivity, it can express semi-conduction properties [...] electrical ageing, which is the increase in electrical resistivity, could very well affect silicon carbide's electrical conductivity properties. Ageing is said to be related to the oxidation of the material." 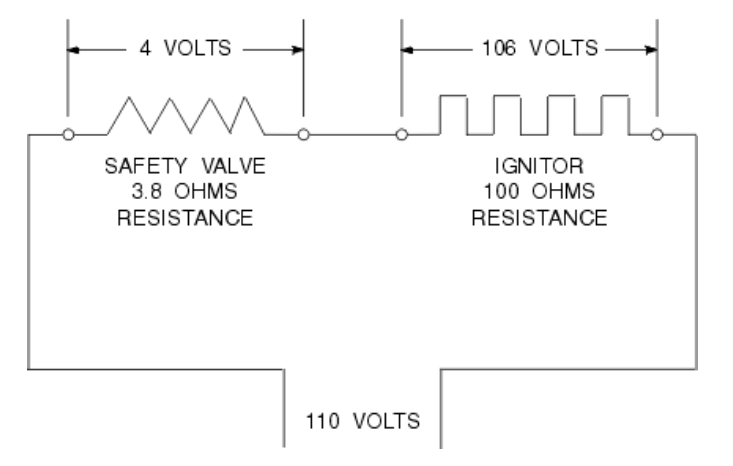 So the way the ignitor works is as a variable resistor in series with the main power, thermostat and gas valve. As it heats it simultaneously glows brighter and reduces its resistance to the flow of electric current, thereby pulling that increased current through the gas valve assembly. (https://en.wikipedia.org/wiki/Electrical_resistivity_and_conductivity#Resistivity_and_conductivity_of_various_materials)

Once that flow enters the 3.2 to 3.6 Amp range it is supposed to activate the gas valve. What can go wrong with this arrangement is that, through oxidation ("rusting") or depletion of the additives used to make the SiC conductive (not sure), the conductivity is no nonger as good as it once was and the element no longer draws the required 3.2 Amps. It is not "weakening", it is returning to its "insulator" nature and this also explains why the decay is typically gradual.

Now the gas valve (http://gofarservicesllc.com/xyz_do_it_yourself_guide/oven_stove_range_cooktop_chapter_6 and https://www.appliancerepair.net/gas-oven-repair - neither is likely the original source). 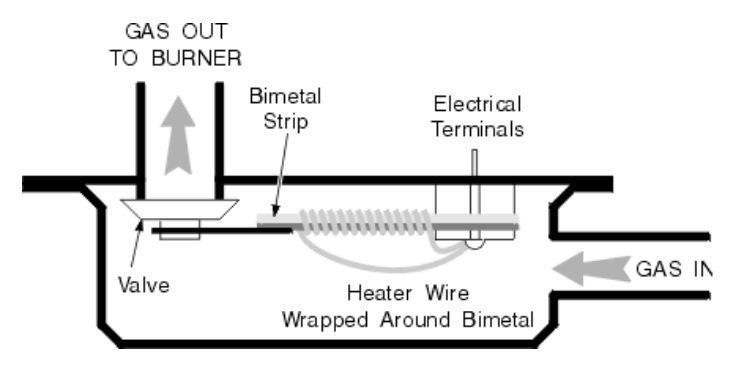 As described in the linked pages, it is a purely mechanical device (electrically assisted but no solenoid/circuit board/etc) in which movement is provided by a bimetal strip. (For anyone who is not familiar with the concept, this is simply a strip of two dissimilar metals permanently bonded/sandwiched together. The metals are selected for their response to heat; both will expand but the rate of expansion of one in response to a given change in temperature is higher than the other, causing the strip to curl away from the side with the greater expansion - they were commonly used in old-style home thermostats with a mercury switch for instance).

To get the strip to curl enough to open the valve, it is heated by a low-resistance coil through which the ignitor ac current is flowing. The amount of heat produced by the coil is dependent on the current flow and it is rigged so that the valve will open at the set 3.2 Amp flow rate. This is such a rugged and low-pressure assembly that it is hard to get a mechanical failure but the coil can burn out. This is why the only thing to really check is that you have continuity through the terminals - if you do it's probably fine.

So now to my situation. The most accurate way to diagnose this is to use a (multi)meter with the capacity to measure in the 10 Amp (ac) range. Remove a clip connector from the terminal on the safety valve closest to you, connect the meter in series between the connector and the terminal and turn on the oven. The current should quickly rise to and remain in the 3.2-3.6 Amp range but in my case it rose slowly and stalled between 3.02/3.03, stubbornly refusing to go higher. Also, as it crossed 2.99 Amps, the gas valve opened and the burner lit but went out when the current stalled.

I still can't quite explain the initial ignition (after repairs I realized it was not actually releasing a full gas flow) but I assume it's some sort of spring/inertia/hysteresis effect where the increase/change in current flow opens the valve but the failure to maintain the increase trips it off(?). Tapping/blocking the jet apparently was just enough to settle the valve at a new equilibrium. Either way, the subsequent partially open behavior is what I would expect for something that is so close to normal operating conditions, just not hot enough to move the strip that last little bit to unblock the valve fully.

Replacement ignitor heated quickly and settled peacefully at 3.48 Amps for a happy ending.

Not the answer you're looking for? Browse other questions tagged gas oven gas-burner or ask your own question.

6
Why is there an opening where the burner connects to the gas line on a gas oven?
1
What could cause my oven not to light?
3
Whirlpool gas oven will not ignite
1
Why does my gas oven not ignite properly?
0
Gas oven hob not lighting properly
0
Gas Oven - Very Low Gas Flow
2
Whirlpool oven gas shuts off one second after turning on
3
Does my home's gas pressure need to be checked?