How to verify electrical box is secured strong enough for 16# ceiling fan?

The metal electrical box says it's "Acceptable for fan support when secured with 10-32 screws provided".

The box has 2 black screws (sheetrock screws?) in the middle that are screwed to some piece of wood above it. The screws are 2.5-3" long but I don't know how thick the wood is they are screwed into. This is between finished floors so I wouldn't have access from above.

The ceiling fan I am installing is 16lbs in weight.

How should I verify that this box is secured strong enough for a ceiling fan?
Or, how can I make it more secure?
-- Should I replace the black screws with 10-32 screws? 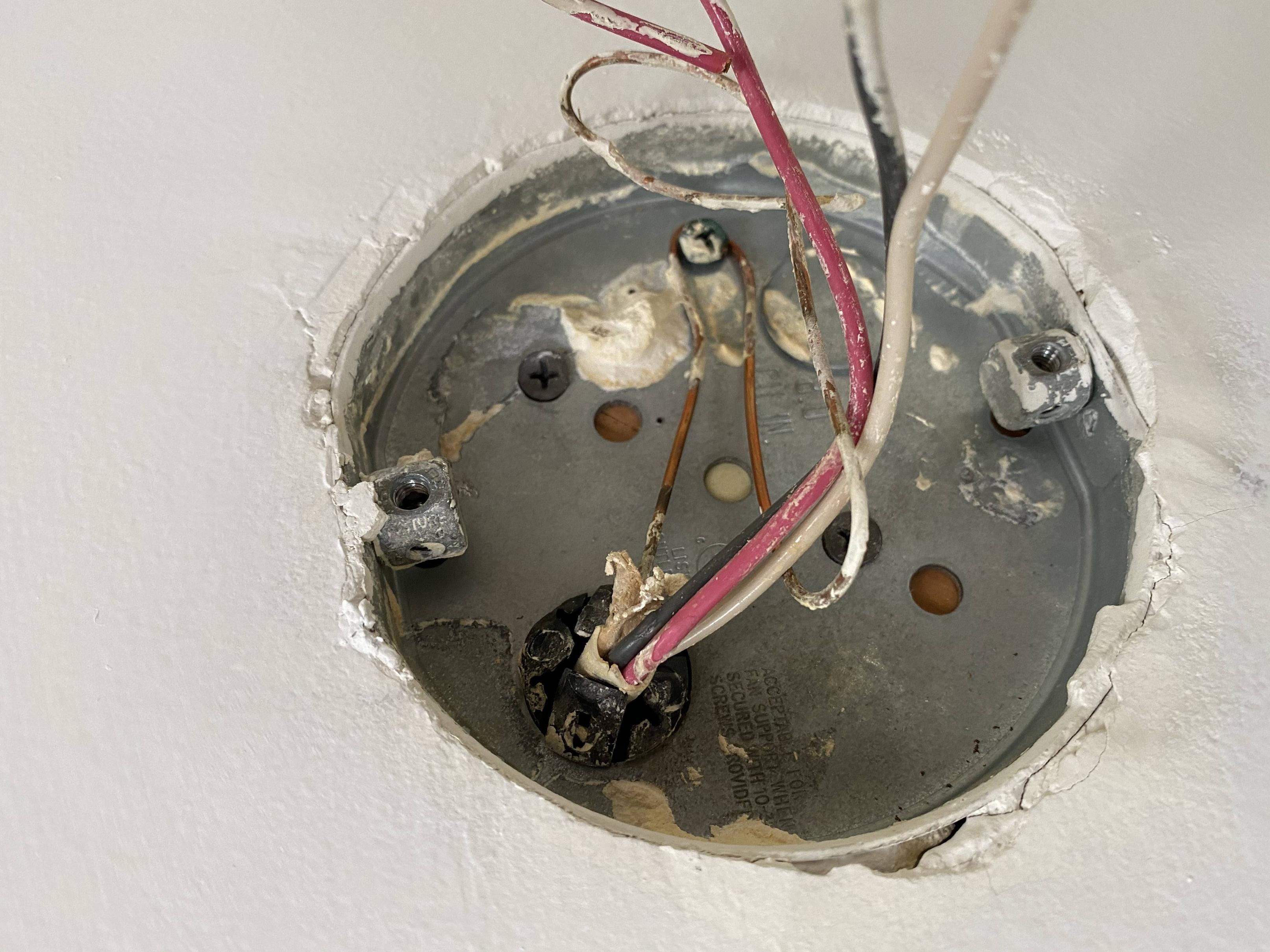 It's entirely possible those squares do something clever, like capture a nut. But they are designed to do a good job taking a 10-32.

I don't know if the kit comes with special, hardened #10-32s. Suffice it to say I bet you haven't lived for years with this mess on your ceiling, so the magic screws probably secured the old lamp. Go get them back. If that means digging in the trash, let that be a lesson not to throw away things before the job is done.

Other than that, what makes them "magical" is probably their carefully chosen length.

DO NOT REPLACE THE DRYWALL SCREWS WITH 10-32

The 10-32 requirement doesn't refer to those!

These screws need to be strong enough to carry 16 pounds and the box. Drywall screws will do the job, but I would convert to deck screws (a wee bit thicker) if they are the same thread pitch.

Lay the screw threads so they touch, and see if the threads have the same spacing. Oh yeah, feel free to unscrew one of the drywall screws at a time to evaluate it - not both at once. The stiffness of unscrewing it will also tell you something about how thick the wood is. If it gets easier as you back it out, that tells you the wood is pretty thick.

First of all, those drywall screws are not "10-32", use what's specified or something similar.

Secondly, you don't know what's supporting the wood that the box is attached to. Get up into the attic and inspect it to make sure it's secure.

Look at all the parts that come with the fan and read the instructions.

The newer Hunter fans with sealed bearings (not oil bath) come with special engineered wood screws for the fan bracket which are designed (strong and long) to go into a ceiling joist. If your fan has those, then they would go through two holes in the box or outside the box. The box itself would then not be bearing any weight.

3
Is there enough here to get a ceiling fan?
2
Is it possible to install a ceiling fan without an electrical box?
6
Non-recessed pancake box for ceiling fan
0
Electrical wiring in ceiling junction box
1
Ceiling electrical box rated for fan, and type of screws
0
Can I ground a ceiling fan to another electrical ceiling box nearby?
1
Mounting Ceiling Fan to Old Junction Box
1
Should ceiling fan mounting screws thread into the box or the framing behind?
1
Any way to mount a ceiling fan using a rectangular “wall” box?