I am in the process of starting a new home build. I am doing some of the work and I am contracting out a lot of the work.

There are two staircases in the plans. Both are double stringer, no center stringer, open stairs. One is against a wall, and one is completely open on both sides.

I was thinking of using a set (2) LVL stringers 2x10" laminated together for each of the floating stringers, and a single LVL 2x10" screwed to the wall on the one that has a wall on one side.

For treads I have have Poplar 54" wide 1" thick pieces. I want to laminate 4 of these tread boards together to create a 4" thick tread for each step. (10 1/2" deep). Besides strength, the 4" treads is to achieve less than a 4" gap between treads for code.

I was thinking of using 2 6" or 7" long 1/2" bolts on each side for each tread. Ie, drill a pair of counter sunk holes on each stringer (counter sunk on each side so a washer and nut would fit on the other side of the stringer). Each bolt would protrude about 2.75" -- 3.75" into the center of the stair and the tread would have holes to slide over these bolts sticking out. (The hole on each tread would have some sort of material or spray foam added before sticking the bolt in to try and minimize any "play" that could lead to squeaking once completed).

(Image shows about a 2x8" stringer -- would be enlarged to 2x10" so the tread is not sticking out the back. Also ignore the railing -- just a stand-in put in by the architect). 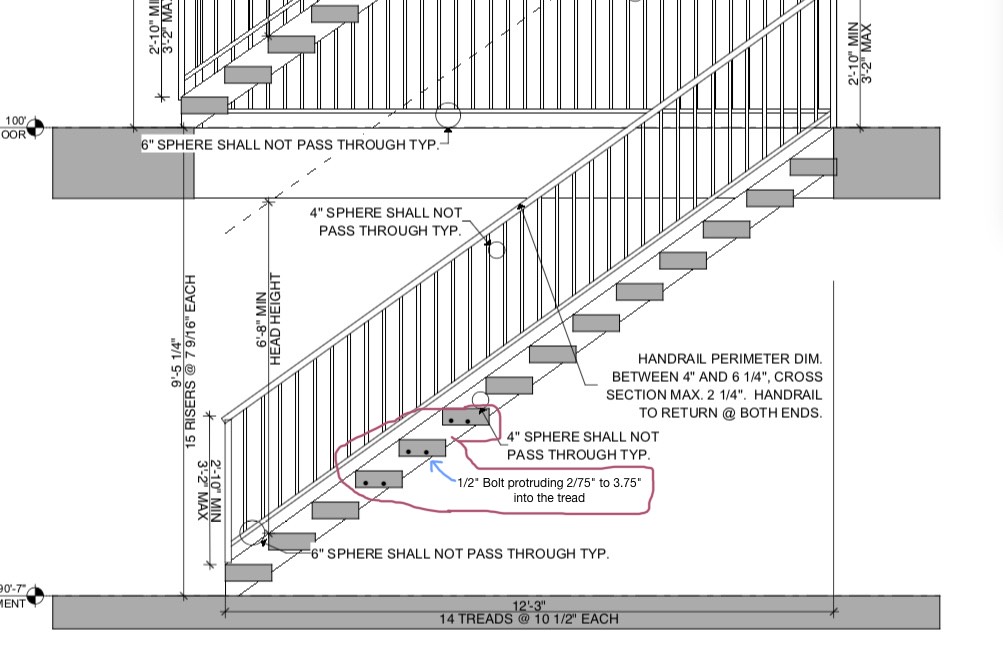 Browse other questions tagged woodworking stairs or ask your own question.