When using a circular saw to cut through panels or dimensional lumber or whatever, the DIY folk on YouTube always set the cut depth to “a hair beyond what you’re cutting”. I’ve been blindly doing the same, but realized the other day I have no idea why.

Sure, obviously you need to make sure you cut through the whole thing you’re cutting. But short of protecting your workbench, why not just sink the blade as deep as possible as a default and only lift it up when there is an actual underlying surface.

Skil gives two reasons for it.

From the operating manual for a Skil brand circular saw: 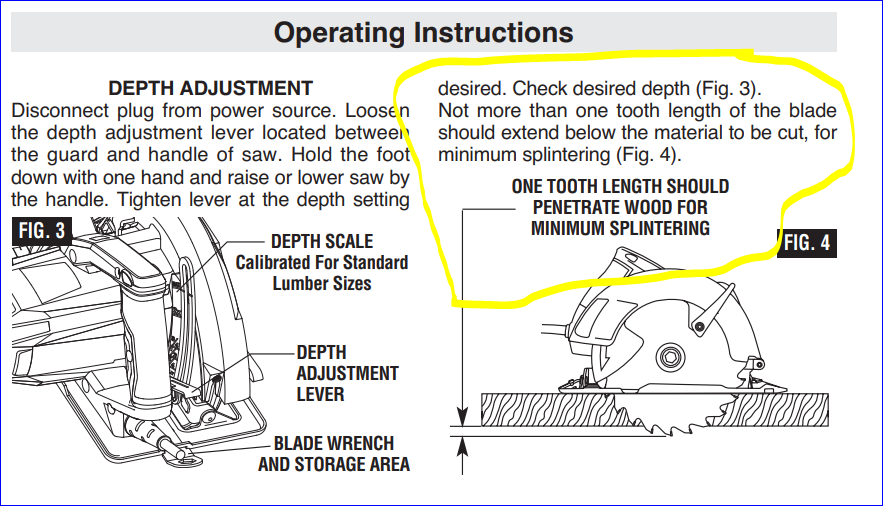 and in the "kickback" warning section: 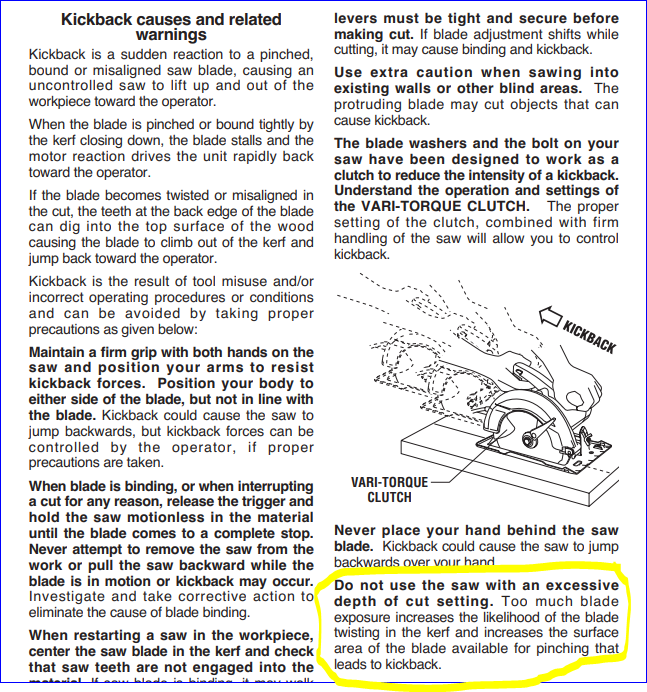 I think the conventional wisdom is about making good habits.

I can't prove this, but intuition tells me that a saw cut that binds/jumps is worse with lots of blade out, versus "the right amount of blade".

Also, there's the risk of forgetting how close things are to the underside of what you're cutting. (You might have only a half inch under your 2x4, which could result in you cutting some gravel or flinging a loose chunk of something.) You might be relying on your sawhorse to take a tiny kerf worth of damage, but end up hacking the horse in half.

If, and I hope this doesn't happen, you were to cut a 2x4 across the toe of your boot with a full blade, it would be much more disastrous than a blade that's only projecting 1/4".

At the end of the day, do what's right for you. If you can build effortless systems around being safe with a bunch of blade, then go for it. For what it's worth, though, my coworkers who reset blade depth accordingly are generally better at their jobs. (Not trying to draw a causal link; just noting a correlation.)

This is more of a preference of the user determined by experience in my opinion. I formerly worked building houses so I've probably made hundreds of thousands (I wasn't counting) of saw cuts.

Any saw manufacturer is going to tell you to set the blade to the depth of the material to keep people from cutting their fingers and toes off.

Set the blade to depth. Don't put your fingers close to the blade. Using two hands is probably advisable especially if you are not familiar with the tool. Hold onto the saw tightly and do not let go if it kicks back. Let go of the trigger but don't let go of the handle. You really don't want a saw jumping out of the cut and dancing around by your feet. Also, use a square and mark a line. The skill saw wants to go straight. If you try to twist it in the cut that's when the blade will grab the sides of the cut and try to throw the saw backward. Make a line to follow even if you don't have an exact measurement. Following a line is also good practice.

The best way to cut sheets in my opinion is to use a cutting guide such as the factory edge of the plywood/osb. Nail or screw the guide on either end 1 1/2 inches away from where you want to cut and hold the edge of the table against that edge and push it down the straight edge. You need to set the depth of your saw to pull this off. If you don't want to score the sheet underneath you can adjust it to just shy of touching the sheet underneath. Using this technique you can cut straighter than you could with a table saw and not necessarily parallel. It also saves you from having to bother chalking the line and following the chalk line, so when you get fast enough with it, the time to cut is comparable to chalking a line. If you don't understand these instructions this isn't for you.

For cutting dimensional lumber, the pros generally don't set the depth unless it's nailed down or something. You can actually achieve straighter cuts by holding the front of the table on top of the board, line up you cut and plunge down onto it as demonstrated here. Also, going full depth it's easier to cut straight as the saw blade itself is acting as your guide. If you're super concerned about kick back you probably haven't been using a saw long enough and should master the basics before attempting this.

This video has some tricks for experienced users. He likes a worm drive saw. I prefer the sidewinder type. Also, user preference but worm drive saws tend to be easier to use in some ways because the motor is mounted front to back so it's not fighting you from keeping the saw straight. With a sidewinder type you have to constantly adjust to keep the saw straight. The downside of the worm drive saws are that they are heavier and more expensive so as a novice you probably won't be using one anyway.

Never put your fingers under the board close to the blade no matter what depth it is set to. It's not like a knife where you can stop cutting yourself. They will be there and then not and they don't grow back. There's nothing wrong with a bit of caution especially with power tools.

This is about the angle of saw tooth compared to the angle of the wood. Intuitively if the saw blade is deeper (more blade sticking out) the tooth is more parallel to the surface as it exiting the wood increasing the chance of blow out.

Having the blade further away so it is barely coming out of the wood as it is cutting means it is more perpendicular when exiting the bottom face, in effect making a smaller cut.

At the end of the day a saw blade is just a disk of many chisels. If you were trying to reduce blow out when cutting through a piece of wood with a blunt chisel, how would you hold it? Now think of what the saw blade is doing.

Not the answer you're looking for? Browse other questions tagged circular-saw or ask your own question.