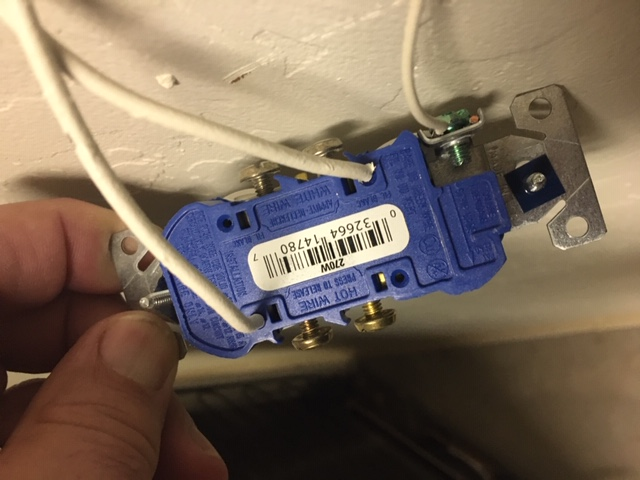 The above picture is the backside of a non-GFCI downstream outlet. I would like to plug a refrigerator into this outlet. However, when I do the circuit gets tripped due to the surge of the motor coming on.

The outlet is in my garage at about 4 feet off ground level.

My question is this: Can I do something to this outlet so that I can plug a refrigerator in without tripping the circuit?

As discussed in comments, this problem does not happen immediately but appears to be related to the defrost cycle - in one test it took 7 hours until the breaker tripped. Assuming this is the GFCI tripping, which appears to be the case though that hasn't been stated clearly, that points to one of two possible problems:

So the question becomes: Is this the beginning of a potentially dangerous fault, in which case the GFCI may have saved someone from serious, even fatal, electrocution, or is this truly a minor issue, possibly even a design flaw, where the electrical leakage is so small and so hidden that it would never actually present a danger.

As Harper frequently points out, GFCI trips on refrigerators generally have far more risk of causing food poisoning and/or loss of food due to undetected problems than they do of benefit by preventing electrocution. So if the situation really is "not a real problem, just poor design that leads to GFCI trips every defrost cycle but safe to use" then the solution is to wire up a refrigerator-only receptacle off the LINE side of the GFCI instead of the LOAD side.

If, on the other hand, this problem is actually a sign of a potentially dangerous situation - perhaps caused by damage during the 5 years that the refrigerator sat unused - then fixing the underlying problem is a much better course of action.

No random person on the internet can make this potential life-safety decision for you.

(If it were me, I'd see if I could isolate the components of the defrost circuit to see if there was repairable damage. But that's me. And it is likely a non-trivial project to do that.)

To answer your direct question, the outlet itself is unlikely related to the tripping unless it's a bad outlet (already identified wiring issues notwithstanding).

Your breaker is tripping either for overload (I'm guessing it's a 15-A breaker), or for a ground fault if the breaker is a GFI breaker (going to assume it's not AFI - arc fault interrupter). If the overload is low (e.g, 16 A on a 15-A breaker), it can take a long time to trip (7 hours unlikely, though). Higher overloads trip faster.

Typically, motor startup/inrush (for something small like a fridge) does not last long enough to trip a breaker. If the breaker is old/weak, it might trip too soon. If the fridge compressor bogs down for long periods, the breaker may eventually trip. If the circuit has a lot of other load and the fridge pushes the load over the breaker's capacity, normal startup could cause a trip. Lots of possible scenarios for troubleshooting.

3
GFCI not tripped, but no current downstream
17
Why would a GFCI trip on refrigerator circuit?
2
Gas Dryer suddenly trips any GFCI Outlet immediately upon being plugged in, but works fine in non GFCI
0
Going from GFCI to non GFCI Breaker
3
Why don't downstream outlets work after replacing a GFCI outlet?
2
Outdoor Outlet Non-GFCI Downstream of GFCI
1
Can I run hot wires for both GFCI-protected and non-protected branches in one conduit?
3
Fridge tripping GFCI Outlet
1
Replace GFCI outlet or the brand new washing machine?
0
Refrigerator has to be on GFCI?