New here! I am DIYER who rehabs homes and rents them.

I’ve worked with a few panels but never came across one like this, which seems like a split bus panel.

It seems I didn’t adhere to the 6 breaker rule, I believe that’s what it is called and added some of my lighting and outlets on the first 6 spaces.

I guess my question would be should I remove those 4 breakers and place them below the red circled double pole breaker? I imagine that breaker will activate or deactivate any power below it, but not above it.

Also, if I were to use the the first 6 slots, what are they exactly used for and is there anyway to kill the power to those slots without having the meter pulled? 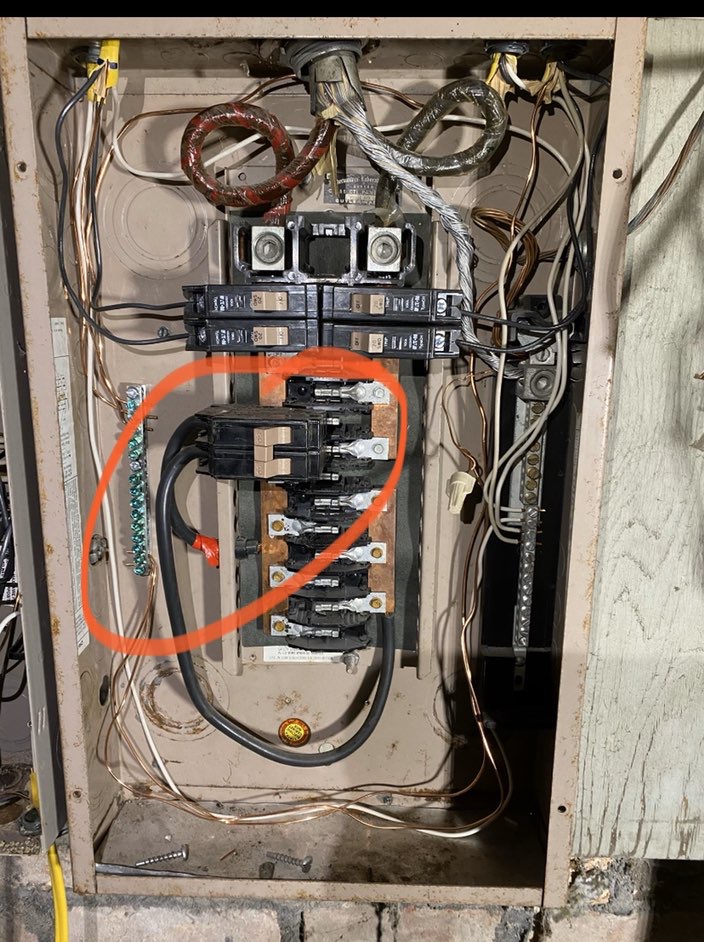 The origin of Split-Bus panels

So, think 1920. Lighting is the "killer app" that is making everyone electrify their homes. Plug-in appliances are still coming along, but by and large 30A is plenty for most people just doing lighting and the few plug-in appliances of the day, with 60A for those with a big electric appliance.

Now, think 1950. Postwar, they're building houses like crazy, and they have new-fangled "all electric" appliances - electric ranges, electric dryers, electric water heaters - some houses even have electric heat! And why not? Nuclear fission plants are in the pipeline, and just around the corner is nuclear fusion -- clean, safe and too cheap to meter. The old 30A service (for mainly lights) or 60A service (for lights and maybe one big electric appliance) just doesn't cut it anymore.

The problem is, service equipment hasn't been keeping pace. Miniature circuit breakers exist, but the design mentality is still stuck in 1920 - with 60A being the largest main breaker that's really made in any production. And these new homes need at least 100A, and 100A main breakers are nosebleed-expensive industrial tier products.

"Well", say builders. "How about if we split the main breaker function to several several affordable main breakers? You have to throw them all to de-energize the house. Figuring on electric range, dryer, water heater, A/C, and a fifth to feed an internal 'subpanel' for traditional 'lighting' and recep loads". And the panel builders said "It needs to be an even number." And NFPA said "alright, six it is. You must be able to turn the power off with 6 hand movements". Which also happens to be a rule in industrial power.

So the top 12 spaces, the "Rule of Six" area, are for major (electrical) appliances that pull 240V. Thus the 6 need 12 spaces. You can put single-pole or even double-stuff breakers in there, but you won't be able to use all 12 spaces if you do.

Is the panel legal as pictured?

I count 1-2-3-4-5 throws. Yes, you can do that and put 1 more breaker in the Rule of Six area. However then you are done. You may find that stifling, so I recommend putting small loads in the subpanel area.

It also remains that Rule of Six/split-bus panels are scary dangerous, because if you have 50A range + 30A AC + 30A water + 30A dryer + 60A for the lighting section + a 100A breaker to the Tesla charger, you may notice that's 300A of "main breakers" on a 125A service. As houses power more stuff, you have a higher chance of blowing right past the safety limits on the panel - and nothing catches this on a split-bus panel!

Meanwhile 100A and larger breakers have come down massively in price. So I like to see Rule of Six panels converted into "Rule of One" panels one of several ways:

The way your setup is is the top section is always hot. I normally use the upper section for powering the lower section, as well as the electric range , and other large draw devices or sub panels.

Most of the homes built in this era do not have main breakers at the panel. As new codes are implemented or updates to the systems this is being required.

For now the only way may be to have the meter pulled to remove power to the top section.

There is a few funny things happening in this panel.

Second, this panel has a dedicated grounding bus, on the left. Which seems to indicate that it is a subpanel and not a main. Is there a main breaker at the meter or a main panel ahead of this panel?

Third, the panel is being fed with a two wire shielded SE type cable. Meaning the shield which is primarily used as a ground is connected to and is attached to the neutral bus and being used as the neutral.

Fourth, I see a grounding electrode conductor coming in from the right side and also connecting to the neutral bus, and I don't see a bonding screw to the panel. This means the grounding bus is isolated and serving no purpose or at least it is installed incorrectly.

Needles to say this panel was not installed by a professional and was probably never inspected. If my assumptions are right this panel presents a shock hazard for any one working on it or any circuit down stream of it.

My best advice is to uninstall this panel and the feeder and install it properly according to your jurisdictions codes. At the very least you need to correct your grounding and neutral bus buy moving the grounding electrode to you grounding bus and bond you neutral bus since you have no effective grounding electrode coming from upstream. This still doesn't make it legal and I do not recommend it for a permanent fix, but it would help protect you from electric shock.

When considering your options of a cheap bandage or a more expensive proper installation, keep in mind that this panel is a hazard and a human life is at stake.

0
Is the subpanel installation in a detached garage correctly done?
1
Chinese Breaker Box (240v split-phase?) Lacks Neutral Wires and Grounding Bus
1
Installing a sub panel to a GE split bus panel
0
No power to garage after cleaning fuse contacts and shorting a main circuit
1
Replace Circuit Breaker on Split Bus Panel
6
Trying to figure out how this service panel is getting electricity
4
Is this a split bus electrical panel?