Sealing a water pipe leak with hardening compound without disassembly

I would like to seal a threaded fitting without disassembly.

In the past, I have used some kind of hardening substance that could be used to stop leaks on water pipes. This is, of course, not "pipe dope" or Teflon tape that might be used when assembling the fittings in the first place.

For background on the problem, I sweated the copper fittings first, then put three wraps of Teflon tape on the 3/4 MNPT and assembled as tight as I could get it with 9" wrenches. Then I sweated the valve into place, protecting the threaded fitting and valve with a damp cloth. I didn't have enough room for unions since the valve is operated on the other side of a wall. Anyway, when pressurized, I have a leak, which is common with threaded fittings, based on other questions on this board. 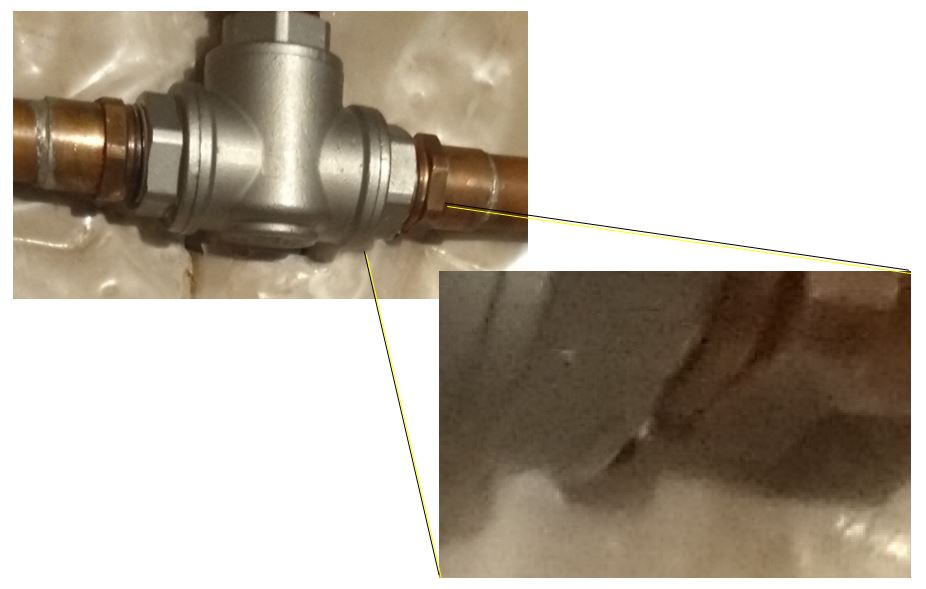 Because it would require a lot of work, and would be messy to dissemble this, I was hoping for a quick (and maybe only temporary) fix that did not involve cutting the valve out and disassembling it. Instead try to find some kind of hardening putty. But I don't know what this kind of putty is called, and if it would work on this arrangement (copper and stainless 304 threaded fittings).

UPDATE: I used JB WaterWeld™ Epoxy Putty. It didn't work. I first cleaned the area with a wire brush and a soap and water solution. Spend a considerable time with the wire brush and soap solution. I then rinsed the area completely. Then I dried the parts completely, and for good measure, heated the whole assembly with the torch so it was just warm to the touch (evaporating any remaining water). So I started with clean and dry parts, then I mixed the putty as directed and forced it into the threads and beyond. I waited two hours (says one one hour is needed), but when I turned on the water again (pressure is about 85 PSI), it began leaking. So epoxy putty didn't work.

A temporary fix could be achieved by using a gauze / cloth tape, plus something like Fernox LS-X.

If you apply the Fernox to the joint, and then wrap it with the gauze, ensuring that the gauze is fully impregnated with the goo, you should get a good seal. Ensure you remove the pressure from the supply first.

Fernox actually uses the water to cure, so it can be applied wet. It's magic stuff - I always keep a tube handy for emergencies.
(I think this suggestion is probably remembered straight of the back of the box, btw)

I’ve used epoxy that I’ve bought from my local plumbing store. Mix the two tubes and apply. It gets very hard. I’ve only used it on small drips and they haven’t leaked since. I’ve even seen it used on a 3 inch pex line once when they badly cut and it worked to stop the large leak.

Not the answer you're looking for? Browse other questions tagged plumbing leak water-pressure copper-tubing stainless or ask your own question.

1
How can I replace this water pressure reducing valve?
2
How can I get the supply line brass valve seat on Pfister tub/shower mixer valve to stop leaking?
1
Problem with NPT threads on dual check valve?
1
What to try next when pipe joints leak with both thread sealant and with teflon tape?
0
How many wraps of Teflon tape around nipples that need to point in one direction?
0
Water leak under kitchen after shutting off / turning on water
1
Does thread compound (dope) over tape prevent this kind of leak?
0
special key wrench for spin-down filter's brass 3/4" MNPT fitting that lacks wrench flats?