Today, I tried to replace the tap unit to my mom's hose because the 40-year old tap was leaking water everytime I turned the water partially on. So I used a vise grip to try to unscrew the tap. The nice news is the tap is removed, but the bad news is it was not removed completely. In fact, part of the threading is still stuck in the barrel. Now remember, no plumbing work was done on this in like 40 years at least.

I tried various methods to remove the threading inside. First I tried scraping a kitchen knife around in hopes it eats at the metal. it only removed tiny pieces.

I then tried an interior wrench tool which looks like a stick that you put inside and turn with a wrench. That was also unsuccessful.

I even tried 60 grit sandpaper. That also does not work.

Now, my mom suspects the metal on the old hose tap is brass, but I think it is copper. I measured a new tap with a conductivity meter and surely enough it conducts electricity. Makes me think maybe it is copper but then again could brass conduct electricity?

Anyways, the only other thing I would consider trying is some sort of chemical to eat the metal. The only thing I have on hand is ferric chloride liquid that removes copper, but isn't there a better chemical or method I can use to get the stuck metal piece out?

I also suggested to her that a torch might be in order to help remove the part because I'm guessing some sort of chemical adhesive was used to keep the tap from leaking in the wrong places. but is there another way to do it without having to resort to using a torch? 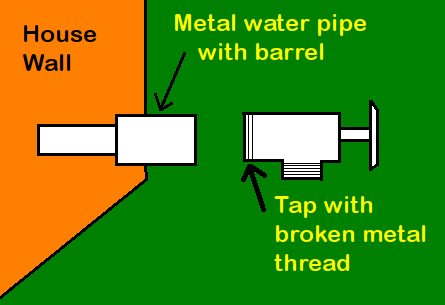 This is the front view of the hole. I added red arrows to give you an idea of how far in I need to go to remove the stuck part. 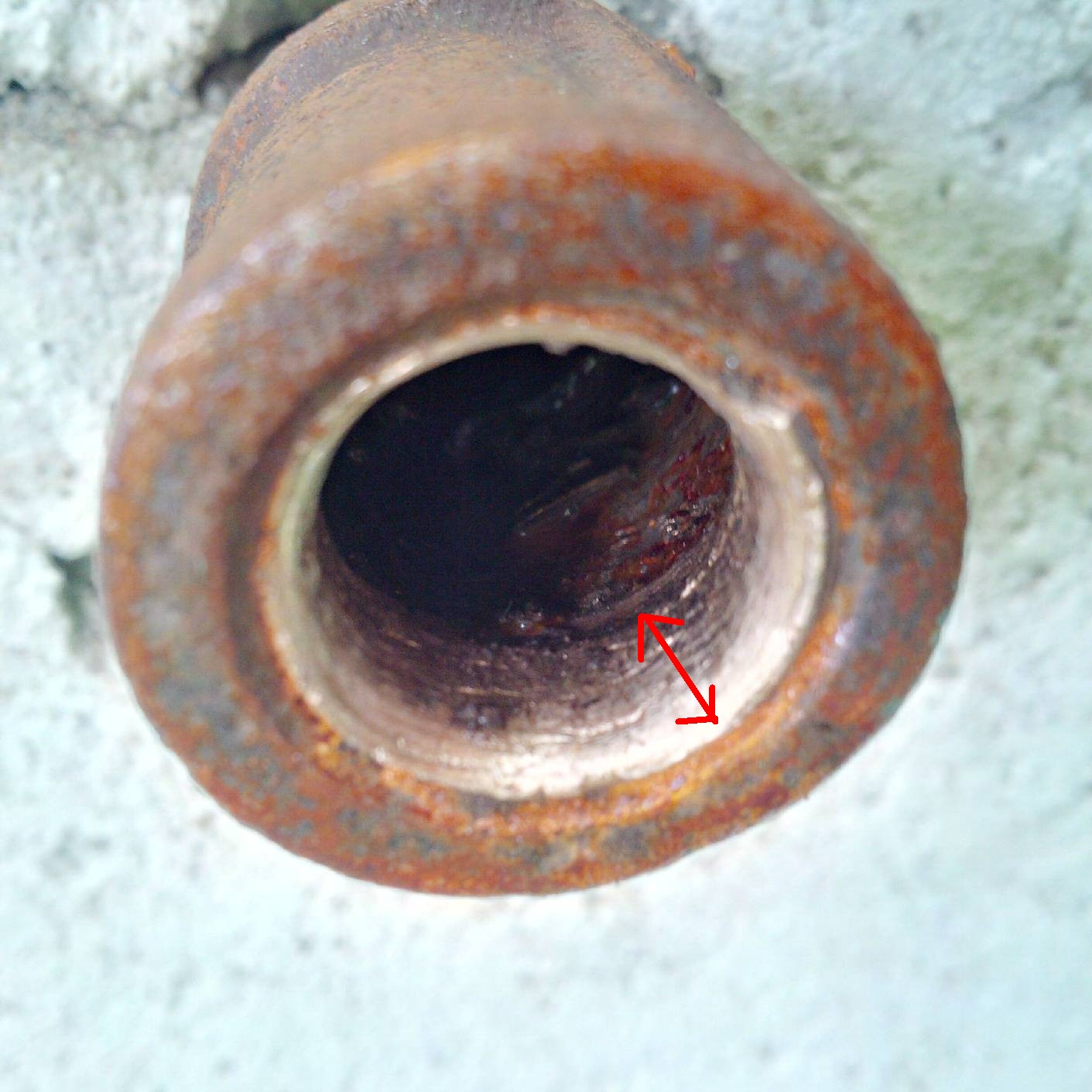 This is the side view of the whole unit. 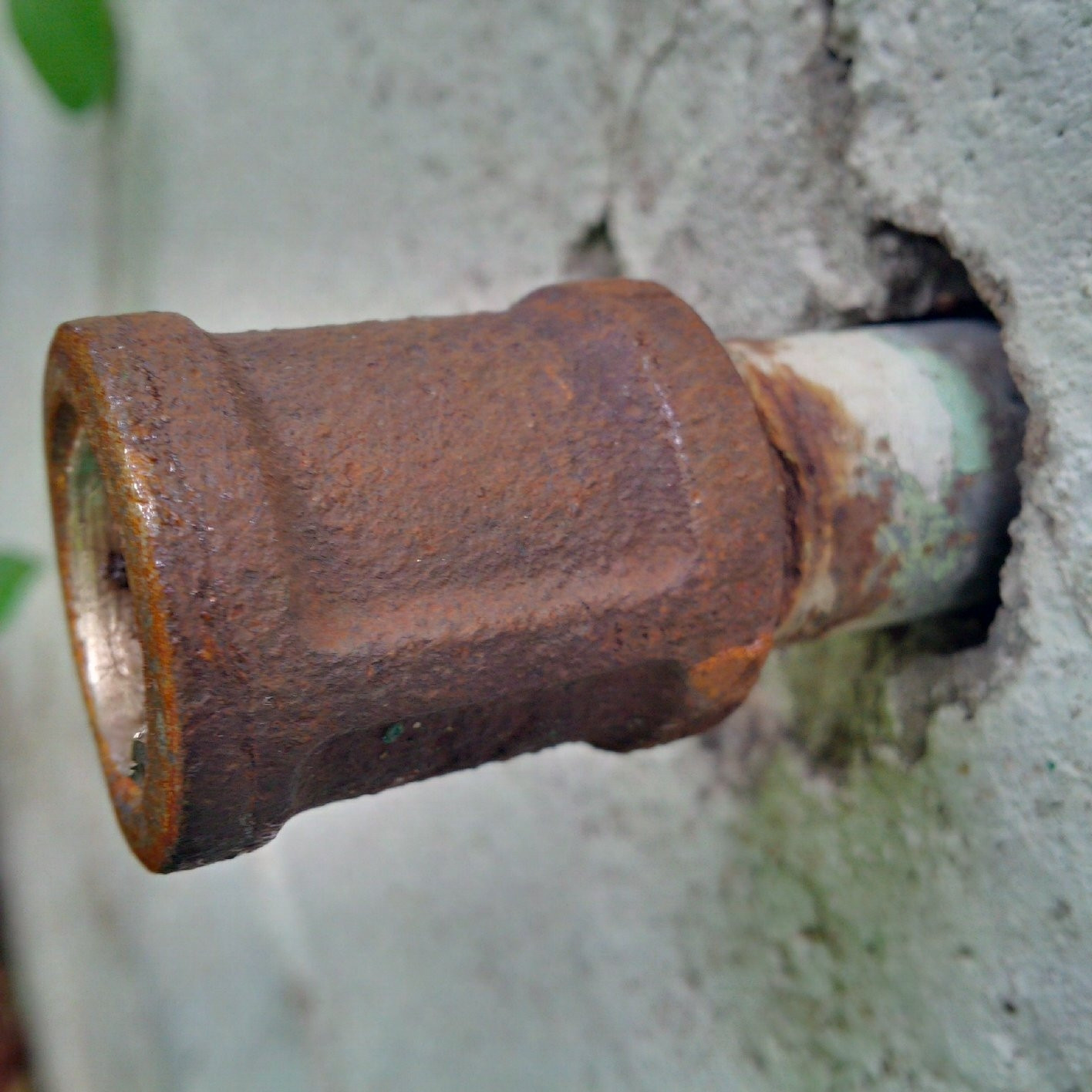 With the new photos added we can see you're working with a regular 1/2 inch coupler on the end of a piece of pipe. Both are probably "black" iron pipe (as opposed to being galvanized pipe).

I suggest removing and replacing the coupler. That'll probably be easier than cleaning out the internal threads. You'll need a pair of pipe wrenches, and heating the coupler with a torch could help too.

For reassembly, apply a pipe thread sealant on the outer/male threads. The white teflon tape is a common choice but my personal preference is usually a paste compound (often generically called "pipe dope"). Being wet it's a bit messier than the teflon tape but in my opinion it lubricates better for assembly and it seals better too.

A photo of the pipe would be helpful, copper pipe is a possibility but the faucet will be almost certainly brass, I agree with Ecnerwal leave the ferric chloride for pcb’s it would take forever with that thick of a material.

I would use heat plumbers dope commonly used to seal threads works great but turns rock hard after a few years , I have found heat the only way to remove in the past, if this is a copper pipe to a brass fitting that is sweated heat will be the only way to remove it unless you cut it then use a shark bite to repair the stub , again I prefer heat, but a photo of the part may provide us the information to give exact instructions.

Old fixtures are likely bronze ( copper , tin ,+ maybe Zn and Pb), very unlikely copper. I have reached into the bore with a hacksaw blade ;you may need to grind down the back of the blade to fit into the bore. Try not to damage the female threads . I have done it a few times with steel, bronze should be easy. You will probably need to make two cuts, then take a screwdriver and pry the cut halves away from the female threads. A recip saw is much faster but much higher risk of damaging female threads. Holding the hacksaw blade with vicegrips works well.

Not the answer you're looking for? Browse other questions tagged faucet tools hose hand-tools or ask your own question.

11
How can I remove stuck anti-vandal rings in tap head?
5
How can I disassemble this old bathroom faucet to fix a leak, without damaging the decorative chrome piece?
1
How to fix a tap where the handle has fallen off
2
Removing the handle from this type of faucet/tap
0
How to replace difficult outside hose spigot handle?
0
What tool or special bit do I need to remove this (will add the name later when I know it :-) )
0
Old Frost-Free Sillcock Woes
0
Removing mini wideset handles without set screws or mounting nuts
1
Unable to remove my hose pipe ( garden hose ) from the tap ( hose bib )
0
How can I remove this piece from my bathroom sink handle?