Can I put 2 air conditioners in one line with 2 breakers? 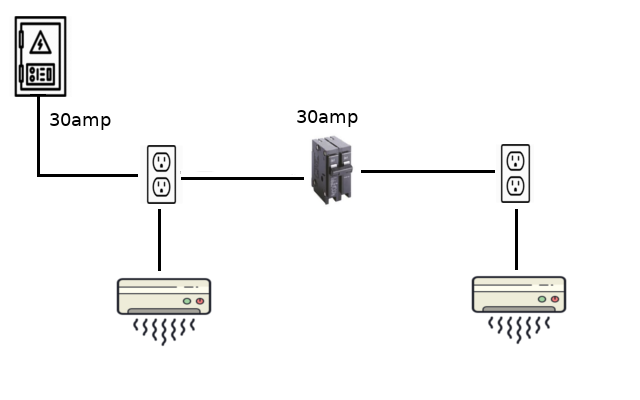 My apologies for the lack of information. Currently my setup is similar to the diagram below but remove the first air conditioner.

The first 30 amp in the diagram is the 30 amp breaker in the main panel. Then there's another 30 amp breaker at the end before it goes to the air conditioning unit. This is how the electrician/installer did it. Although I think the 2nd breaker is not necessary.

We use 220V here and 30amps for outlets. I believe the wires are gauge 10. The current air conditioner is a 1HP non-inverter. Planning on adding a 2.5HP air conditioner. 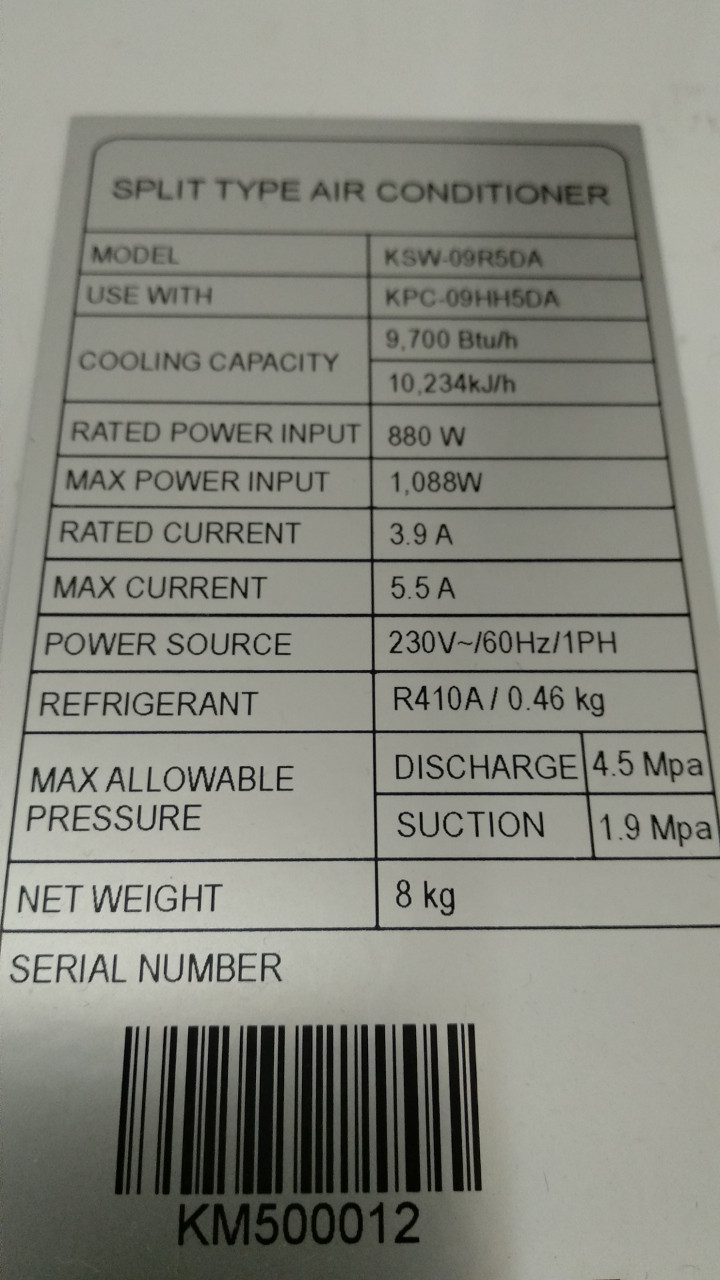 I don't have any info on the 2nd A/C yet as I don't have it yet. Haven't decided what to get yet but initially I wanted to get something with 2.5HP as I need to cool a 30 sqm room.

Ummm, no, you cannot do this and there is no purpose it in anyway. I'm going to guess that you have a dedicated 30A circuit for your 120V A/C unit. That means that there is no more than 30A available on this circuit and the installed A/C needs that amount.

If you try to add another A/C on the same circuit (all code concerns aside) you will still only have the 30A available and there will not be enough available to power the 2nd unit. So anytime both are operating the breaker will open.

What you need is a NEW 30A line from another 30A breaker in your box. You mentioned that your box is full and that's a problem.

I suggest here that you need the services of a qualified electrician to see if the current box can be reorganized to free up some space for another circuit. Otherwise the solution is likely to include upgrading your box to a new one that has more room.

Well, I'm relying on what you are claiming, even though it seems like it would not be legal. (the dubious thing is allowing a 1-horsepower air conditioner on a 30A plug).

However, if these appliances are allowed on 30A circuits, then the numbers check out just fine. 3.5 horsepower is well within the capacity of a 220V/30A circuit.

The two breakers in a string do not make any sense. The only thing I can think is that one of them has some supplemental ability such as AFCI or GFCI (RCD). If so, this should be wired so the added air conditioner is also under that protection.

jwh20 is right, especially about the electrician.

However, if your breaker is DESIGNED to allow connecting two feeds, you may be able to run a second line off the existing 30-Amp breaker to power the second AC unit (local codes may override NEC minimum requirements).

Another however ... you can check the ratings of your AC units; they may both be OK on one breaker if their combined load is less than 30 amps. They may cause lights on the same circuit to dim, especially when they start, and if they both kick on at the same time, they might overload the breaker.

Have your electrician consider both those options.

UPDATE: I’m too new to comment on answers, so I’m limited to editing this one, but my response is still relevant to this answer, too. Breakers do not provide capacity; they limit flow (“current”, “amps”) before overheating occurs (all electric flow generates heat; too much flow means too much heat and possible damage or fire).

GFI’s add a sensor that detects when there’s a “leak”, say when there’s an unintended connection via water in a device that’s not waterproof or maybe a frayed wire makes contact with something or maybe a nail is driven through a wire, but there’s not enough additional flow to trip the overload trigger. AFI’s monitor the waveforms for telltale patterns that indicate arcing. Both trip well before too much heat is generated, the condition that traditional breakers already protect against.

Your nameplate shows max current (flow) of roughly 5 amps; that should occur for short time as it kicks on. It then settles to about 3 amps. You could in theory run 5 identical units off your 30-amp breaker. (Heat does not disappear immediately, so running 6 would likely cause nuisance tripping).

Another breaker between would add almost nothing for protection, since the original breaker will always see as much or more current and likely trip first. With a dead short, the two would “race” to trip first. The exception would be if the short were at the end of the line and the mid-line breaker tripped first, your first unit would still have power.

If the mid-line breaker were smaller, it might be more likely to trip first for a fault. It would likely trip first on smaller overloads or if the load happened to be less than 30 but more than the smaller breaker, the 30 would likely not trip (all breakers can mis-operate)

Regardless, a second breaker serves too little purpose if you’re not wanting to make it a “sub panel” and run thinner wire by using a smaller breaker.

The other comments about cooling capacity and latent vs sensible heat are spot-on; you want the units to run “long enough” before cycling. So there’s a good chance you’ll be ok adding the second unit.

But let a knowledgeable, qualified person look at your entire situation! Use this and other answers and comments to make sure your pro isn’t less than you need.

Not the answer you're looking for? Browse other questions tagged electrical-panel circuit-breaker air-conditioning or ask your own question.

0
Make then break electrical switch?
0
Dead circuits with breakers across from each other
2
Can I add induction cooktop and electric wall oven to my kitchen with this panel?
1
Ganged Circuit Breaker has strange ganging configuration. 40-[30-30]-40
0
What to put in 60A GFCI breakers in Subpanel?
0
How do I run wiring to a shed?
1
ON Electrical Code: 240V line from panel to exterior (fused / nonfused subpanel) for AC
0
Can I reuse the aluminum feeder wire when I replace a sub-panel?
1
Water Droplets Forming Inside AC with Irregular Air Flow
5
How can I replace breakers in a Murray panel with future upgrade compatability?