I’m replacing 2 switches in a 4-gang switchbox with C by GE paddle switches. I’m able to confidently identity all of the wires in the box. The first and last switches are 3-way switches; the second and third single pole. I’m only replacing the latter. The first 3 switches share a line wire, the wire being looped around the first 2 and plugged in the third. There are 4 neutral wires capped together and 4 ground wires capped together. One of each came with the line wire, and the other three of each went with the load wires. In starting to replace the third switch, I initially wired the new switch with the neutral and ground wire that went with the load wire. Nothing happened, the switch didn’t power on. Before giving up, I realized I probably used the wrong neutral and ground wires. So I used the ones that came with the line wire. The switch powered on, but the lights didn’t come on, and also I noticed the lights for the first switch didn’t come on (I don’t remember checking the second switch, but I’m guessing it wasn’t working either). So......I guess my question is do I need to add wires (my research is telling me this called a pigtail??) so that each switch, old and new, has their own wires? I feel like I need to do that for the line wire and for the ground and neutral wires going into the new switches. 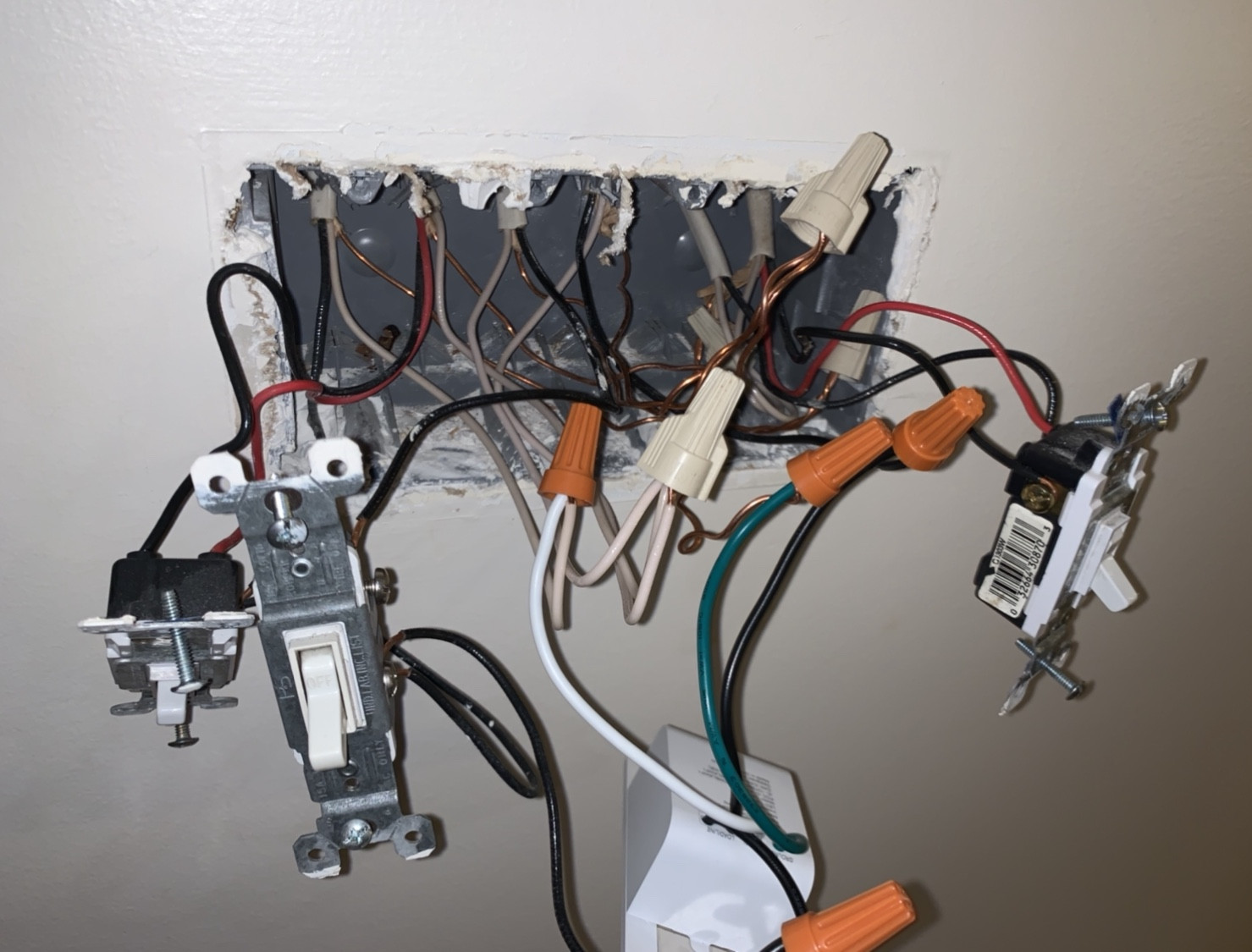 electrical wiring smart-switch
Share
Improve this question
asked May 31 '20 at 5:05

All the neutrals go together

That means for something to work, you must hook up 2 wires and have that loop be continuous. The neutral wire is the other half of the loop. I know it's treated inconsequentially - bypassing breakers and switches, almost exactly like ground is treated (and are tied in the panel, even) -- but neutral is not "white ground", it is actually an equal and just-as-important partner to the hot.

So for light X to work, it must get hot from supply to the lamp, and then, it must get neutral from the lamp back to supply. That was there before. When you decided to grab one neutral and leave the other one dangle, you broke that return. Don't worry, everybody does that once :)

But you have an understandable mechanical problem.

First, that far right 3-way switch is in its own little world. It gets power from cable 5 and sends travelers+neutral up cable 6. There should be a "virtual Chinese wall" inside that box; there should be no interaction between the right side of the box and anything else in the box.

But on the left side of the box, you have a supply and 3 switch circuits all supplied from here. That means you already have 4 neutral wires joining - and that's approaching the limits of wire nuts. Cat-herding 6 wires under a tan wire-nut might be technically possible, but it's a lot to expect from a novice.

I'd use a pigtail to split it into 2 nuts. Join 3 of the 4 original neutrals to a white pigtail you go out and buy. (#12 solid THHN, 1 foot, cut it in half for two 6" pigtails, one for now, one for spare). On the other end of that pigtail, nut the 4th original wire. Now the box is back the way you found it, plus a white pigtail you added. 4 wires under a tan nut, 2 wires under a yellow nut would be the best size choice.

Get a variety pack of nuts (typically 4 of each size) when you go to buy the pigtail wire.

Now the 2-wire pigtail has room for your smart-switch neutrals. Add them to the party.

By the way, when handling nuts, line them up with ends even (don't stagger), hold the wires firmly together and aligned, and crank the nut down HARD - gorilla-tight. That's why bigger nuts have wings. Let the sheer force of cranking to do all the work for you. (no need to pre-twist; this force will definitely do that!!!!) When you've twisted so much the insulated parts of the wires you're holding onto are starting to spiral, you're there. Proof of the pudding is hold the nut and tug on each wire in turn.

If any come out, that would have been an arcing fault and fire. That's why you should never tape wires to hold them in; that's covering up a defective splice. Undo and repeat; no need to cut wires and re-strip, the nut WILL bend the wires as it wants :)