Our washing machine (an AEG model some years old now) appears to be working fine, except that for a few weeks now it has no longer been putting any water through the conditioner drawer at the start of the rinse cycle. The detergent half of the drawer gets flushed as usual for the main wash cycle, but the conditioner part seems to now be not getting used: any conditioner in it is still there undiluted at the end of the whole wash, and if we leave that section clear it's still bone dry at the end.

I ran the machine with the drawer out to see what's happening. For the wash cycle it drips water through the roof of the drawer above the detergent section as expected, but then for the rinse cycle it does this: 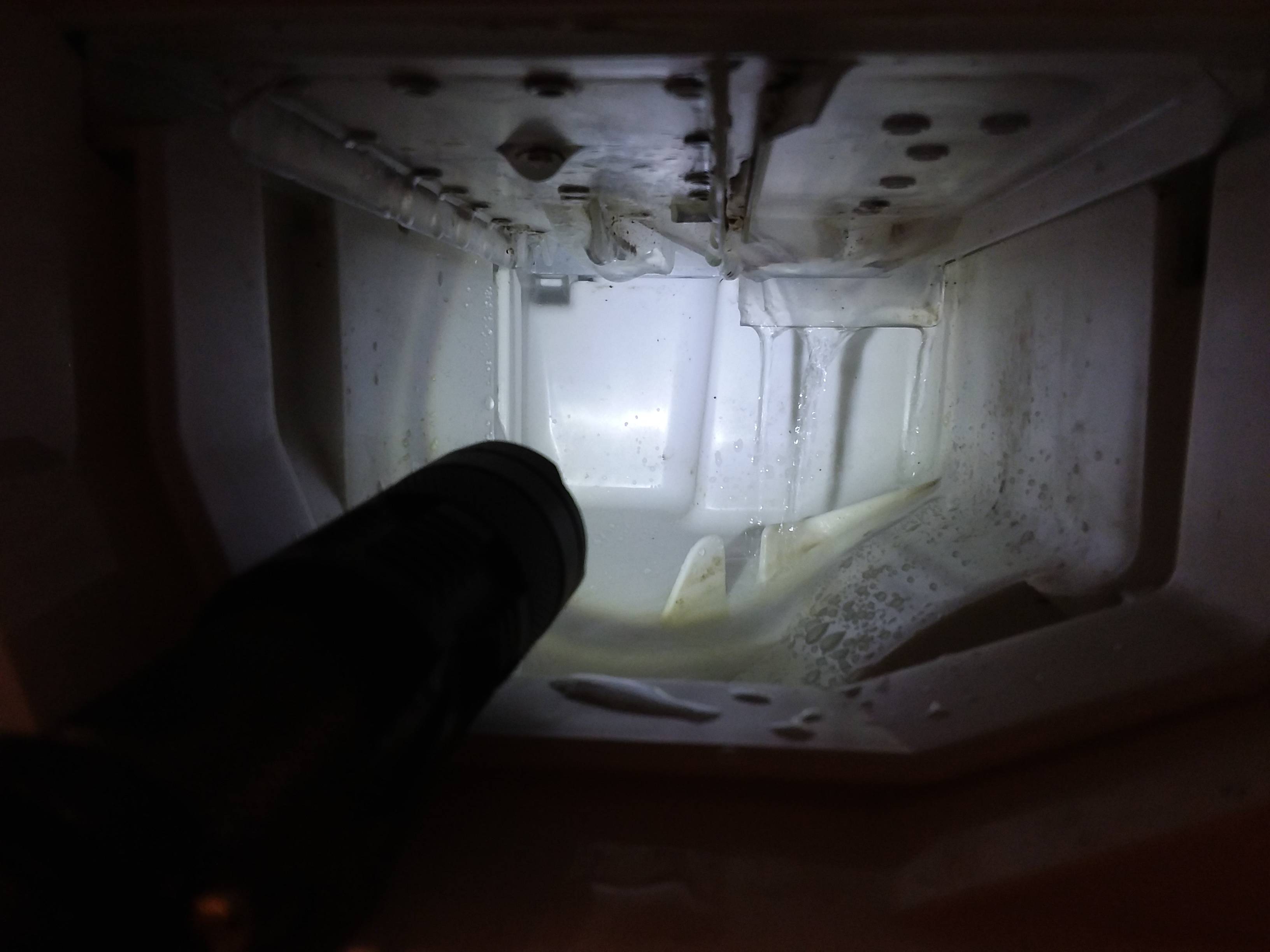 Here's a photo of the drawer for completeness: 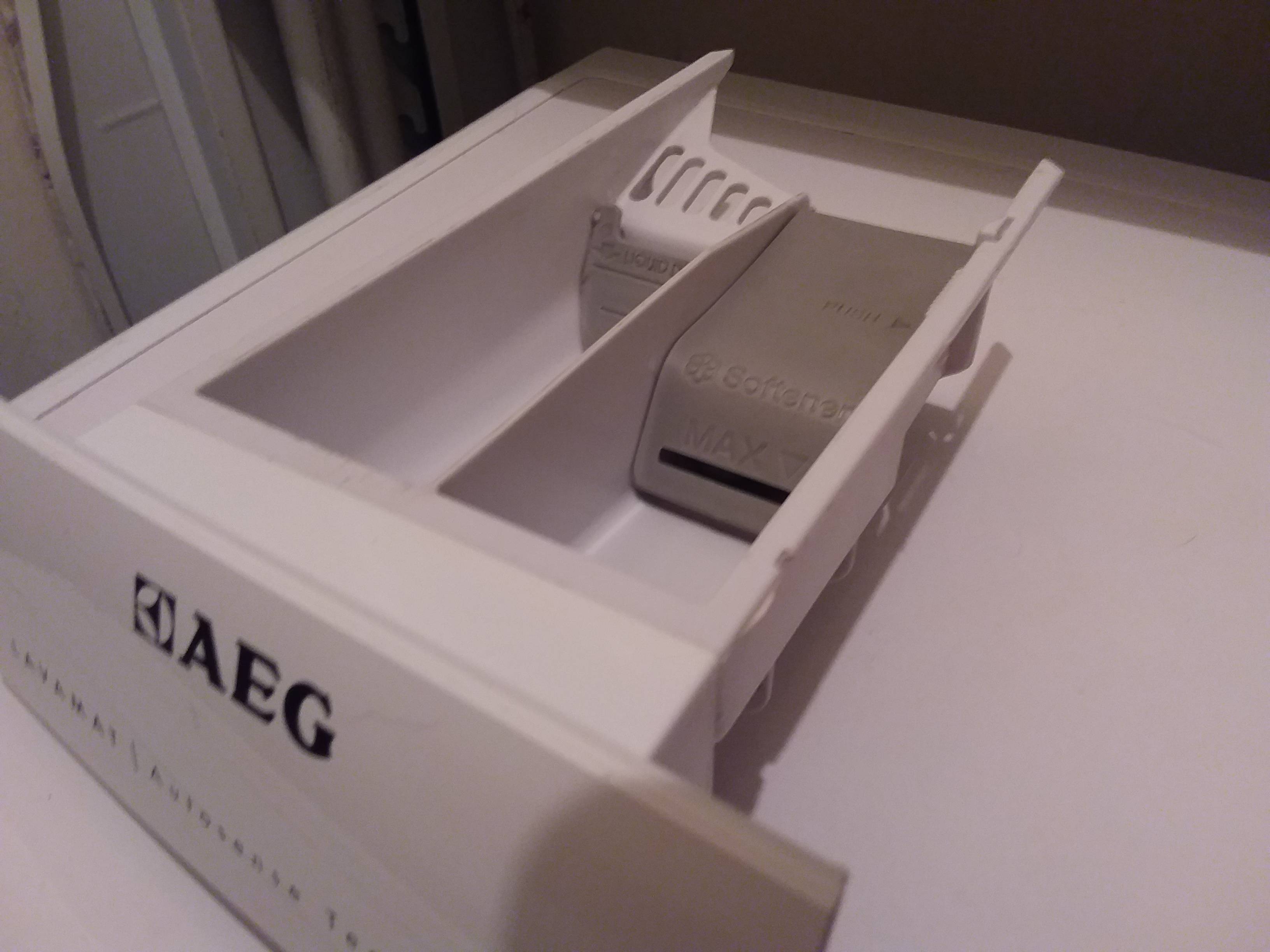 The syphon mechanism under the flap on the right is clean and works fine. The issue is the conditioner section never receives any water, not that it's blocked.

Obvious conclusions are either:

Any suggestions from those with more knowledge and experience gratefully received.

Update: prompted by xeeka's answer below, I took the lid off the washing machine and found this: 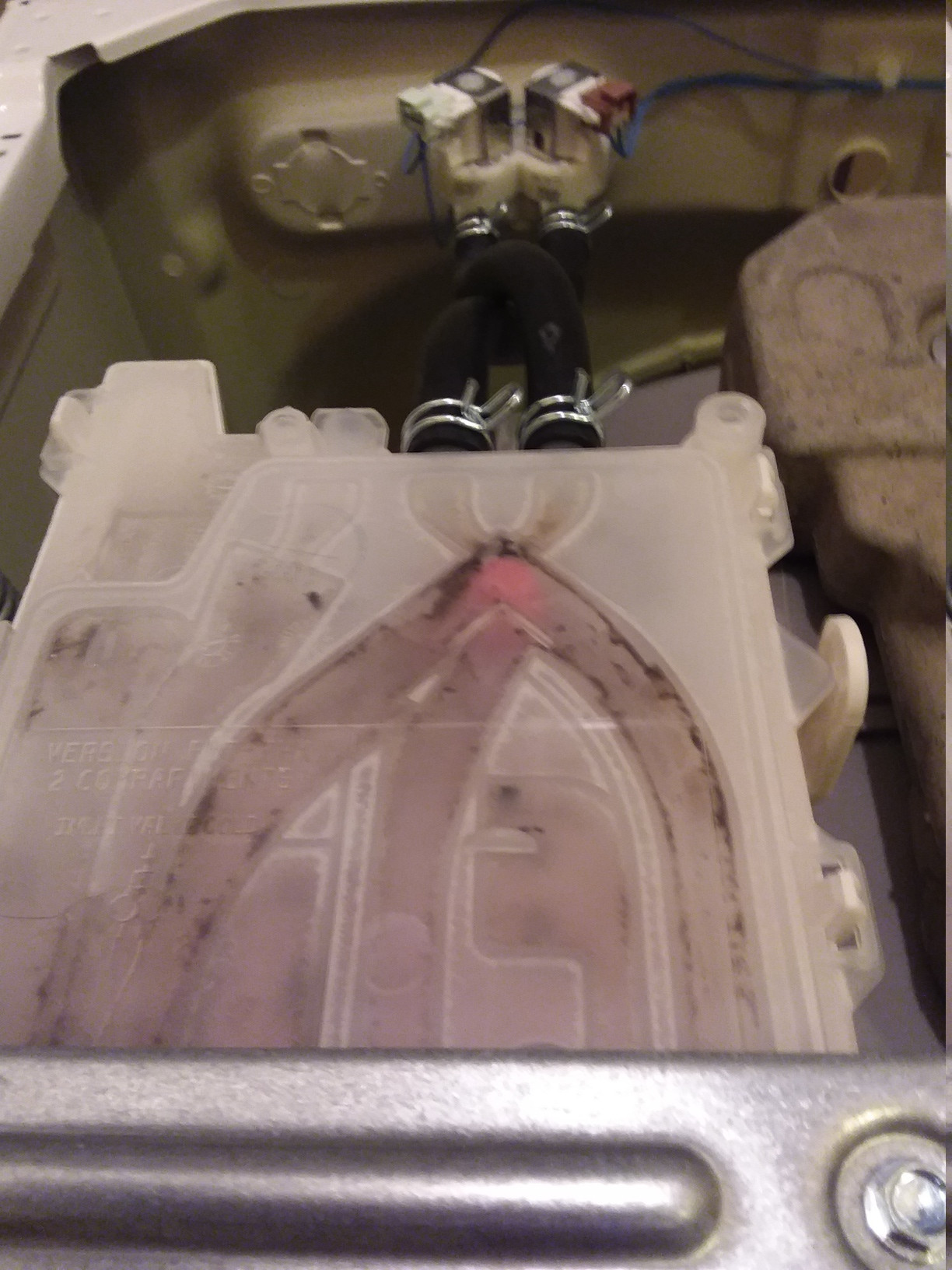 That pink thing is my finger reaching in through the drawer compartment and poking up behind the flap down which the rinse water is seen trickle. There's no obvious blockage. What may be more of an issue is that if the water isn't jetted into this section with enough pressure, it's not clear how it's supposed to get across the gap and into the channels above the drawer's conditioner compartment. Next step is probably to carefully run the machine with the lid off and observe what's happening from this side. Feeling around there, I get the impression there are small holes which presumably form jets for the water to get across the gap... and it might not take much to block or deflect them. More news later.

Update 2: observing while the machine is running shows the wash cycle water for the detergent compartment shooting across from the right hand pipe's jet into the channel to above the detergent, which seems good and as it should be. But when it gets to doing the rinse cycle water for the conditioner compartment, something (gunk?) is slightly deflecting the left hand jet and then it sprays along the channel wall and seems to lose any energy to get down the channel towards the conditioner compartment and just sort of flows back instead. Will be getting hold of some pipecleaners and attempting to clear any gunk around the jet before the next attempt. Trying to take the lid of this plastic thing the water goes into looks monstrously complicated, so there's a question of whether to just try and poke around from inside the drawer compartment (fiddly), or to take the pipe clip off to access the problem jet more directly from the rear. Probably try the simpler approach first.

Update 3: After getting hold of some pipe cleaners and having had a good poke around of the jet, of the channel it runs into, and of the holes in the roof above the drawer... well a bit more black gunk was removed but there doesn't actually seem to be that much of it, and then the next run through of the machine behaved just the same as previously: detergent compartment gets water but the conditioner side it still runs down the back as shown in the first picture above. I also took off the machine's water intake hose, backflushed it and scrubbed its filter; also scrubbed the filter on the machine's own intake. But again, no difference to what's going on in the drawer. At this point I'm boggled. What I'd really like to do is get a look at what's going on at the front end of the channels above the drawer, which are obscured by that aluminium plate, because it seems to me water might well be making progress into the channel that far but then not getting around a corner and to the holes above the conditioner... but it's impossible to tell what's going on there. Fortunately, I discovered we still have a year left to run on an extended warranty, and they're sending an engineer to look at it on Tuesday.

Update 4: Engineer came. Stuck a multimeter on the intake solenid valves and pronounced them working. Then they directed intake hose into a bucket and diagnosed low water pressure. We know we've always had an issue with water pressure on our non-mains plumbing. An older machine with 1-bar minimum pressure specified used to time-out on fills a lot. We replaced it with the 0.5-bar minimum this thread is about and it worked much better... until this issue came up.

Now at some point I've picked up some information that 1-bar of pressure should fill a bucket at 8 litres/minute (and indeed that it is this flow rate which is actually more important than the pressure, as it's what determines whether timeouts will occur). The low header tank plumbing our washing machine is on seemed to be able to push ~5 litres/minute when we got the 0.5 bar minimum machine. However testing it again now, it seems we're getting more like 3.5 lites/minute. So it looks like the pressure has dropped below 0.5 bar, assuming a linear relation, and so below the machine's minimum spec. and so it's not surprising we're seeing more problems than we used to.

No idea what might have caused such a drop. A header-tank fed system would be expected to provide a constant pressure. All the strainers in the pipes at the washing machine end looked clean (in fact I've now taken them all out). Unfortunately the header tank itself is up in a frustratingly inaccessible bit of ceiling. It's not impossible the outflow from it is semi-blocked (dead mouse? crumbling plaster?) or perhaps something has happened to the ballcock and the water level in the tank is less than it should be. That's all for now... until I (or a pro) can get a look into it.

Most likely, the thick top cover can be removed very easily. F.e. after removing 2 screws, the cover must be slided back- or forward for some few centimeters to be lifted up.

Before removing the cover, the power plug and/or breaker has to be disconnected.

Since there may be live/hot parts (high voltage) beneath the cover, it is important to check that there is really no more power connected to the machine.

Without this cover, all parts of the water flow into the conditioner side should be visible and easy to be cleaned. If the material is made for high temperature, a steam cleaner may help. Or a tooth/dish/pipe brush. If the clogged part(s) can be removed, a dish washer could help cleaning those parts with hot water.

The problem appears to be fundamentally due to low water pressure: see the last "update 4" in the question. Based on flow-rate estimates and a 1 bar pressure = 8 litres/minute flow rate plumbing rule-of-thumb, the pressure seems to have - for unknown reasons - dropped below the 0.5 bar of the machine's minimum spec, and this is insufficient for the conditioner drawer to function properly.

(Another bit of confirmation: I installed a 2-bar flow-activated pump at the washing machine's intake. This initially appeared to work brilliantly, including flushing the conditioner drawer properly when it should... but there seems to be part of the washing cycle where the machine's intake solenoid valves are only partially opened, and then the flow is insufficient to activate the pump and in fact is then even more of a trickle than without the pump inline, resulting in a string of machine timeouts at that stage before it can move on to the next part of the programme using full flow again. A shame as it would have been a pretty good solution otherwise).

Not the answer you're looking for? Browse other questions tagged repair cleaning washing-machine or ask your own question.