I have recently rented a condo in a new building in Toronto (2020) where they didnt have lights installed in the Living room. I went to homedepot today and I am trying to install a light fixture that i got. Here are the wires coming out of it. It has 3 bulbs: 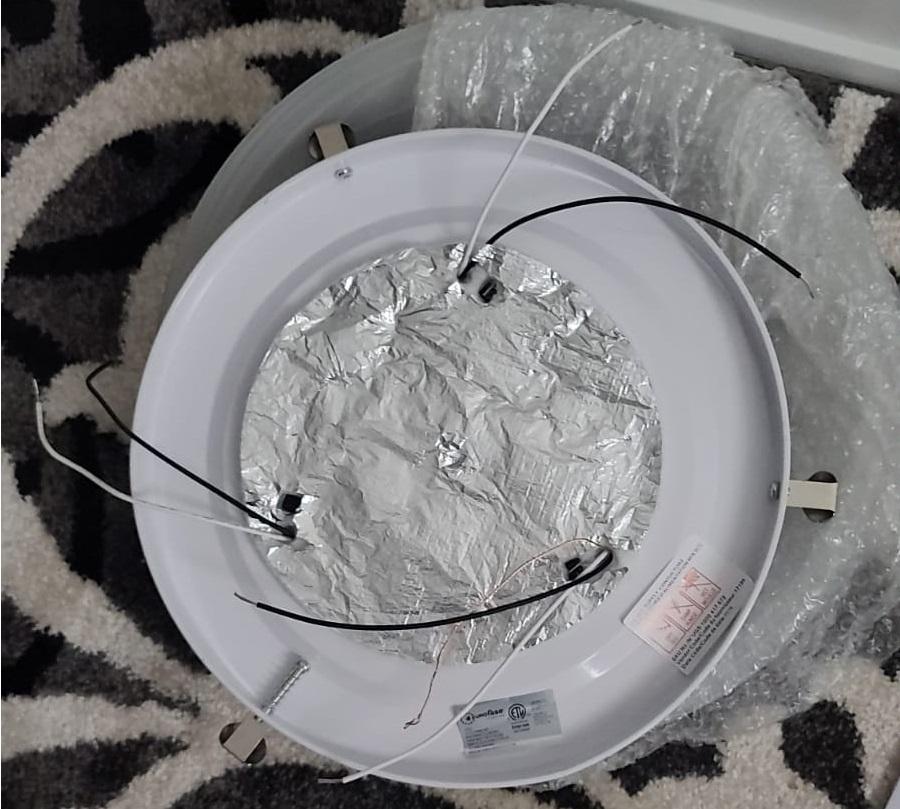 I opened the box in the ceiling and I saw more wires than I expected. I expected just a green, black and a white wire. 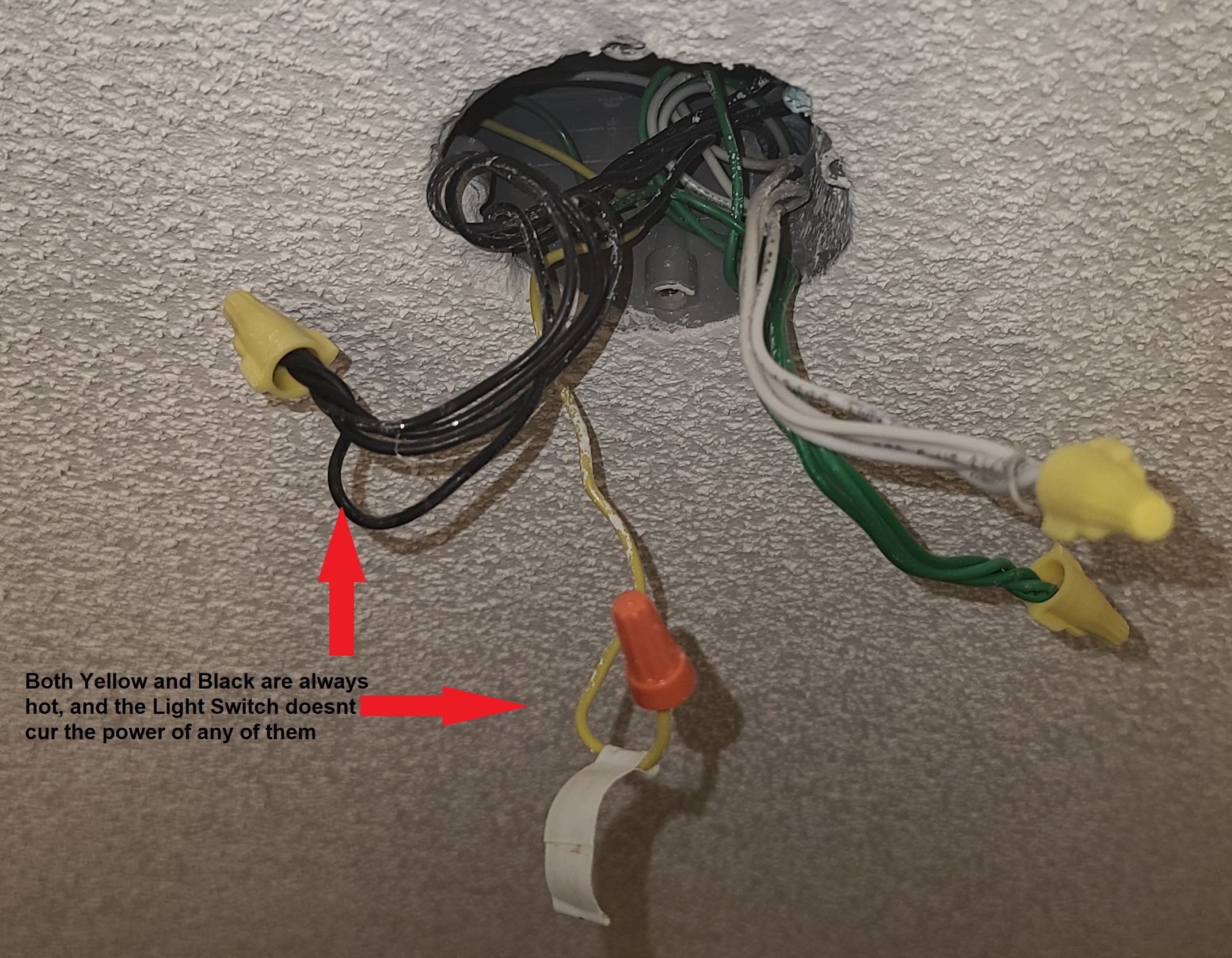 Also, good thing I bought a voltage tester, because if I didnt I might have been dead right now. I found out that the yellow wire that had a tag saying "for light" is always hot and the switch doesn't cut the power from it. (Same for the black wires) 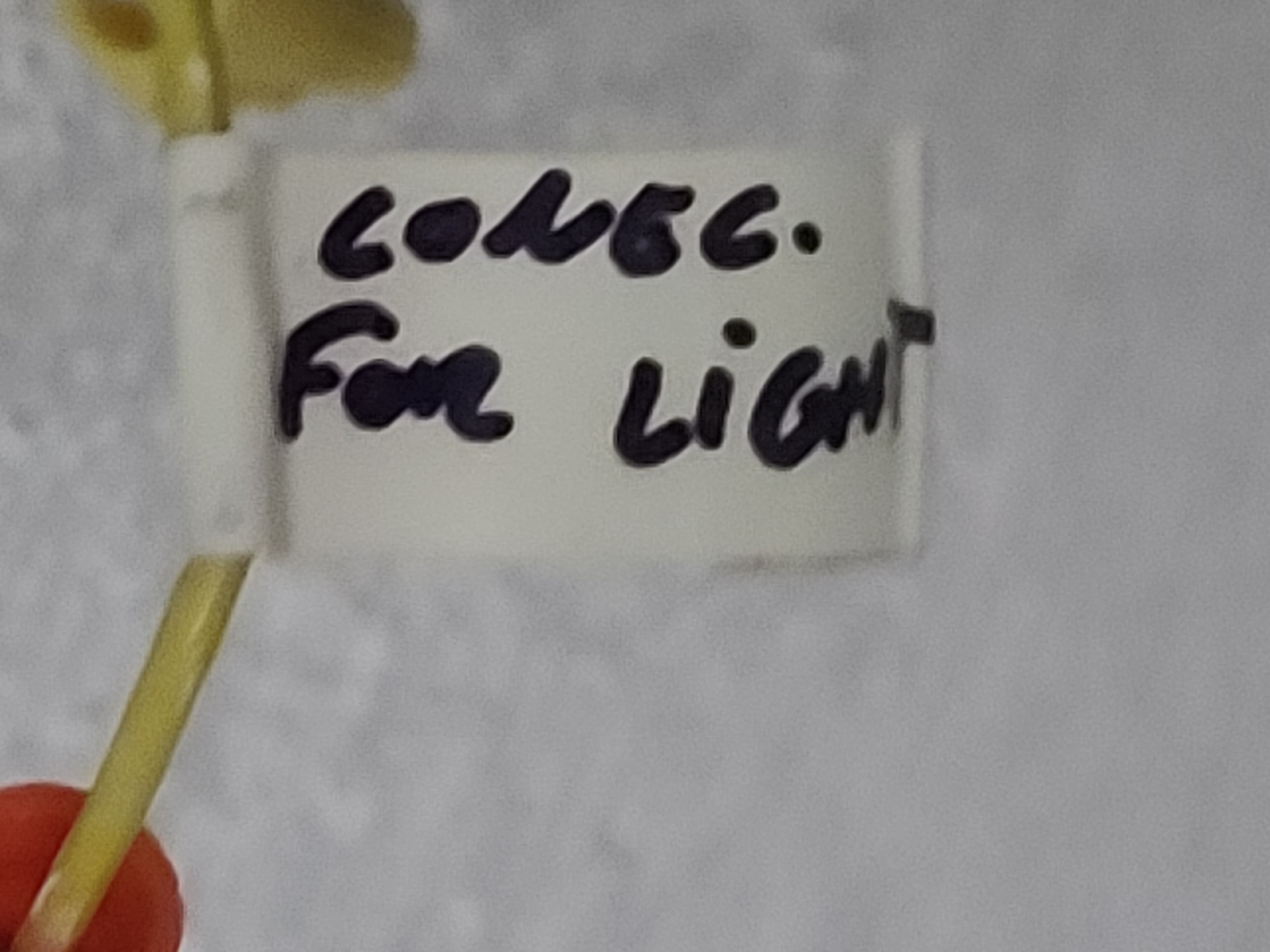 Now, I dont know how to connect all three bulbs to which wires, Any help would be appreciated

Update 1: Here is the wiring of the switch, there is no other switch except that one which should control the ceiling wires 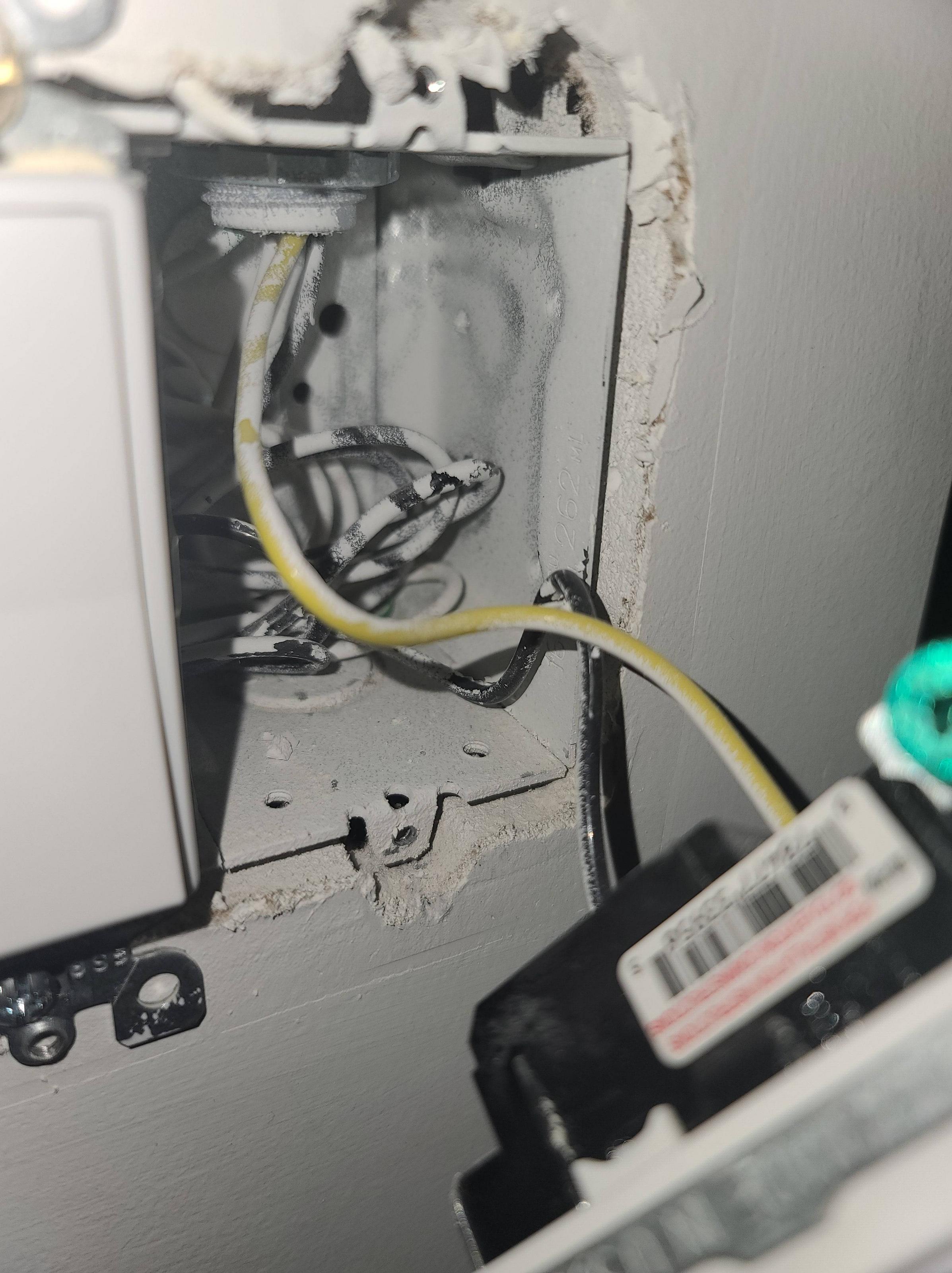 Update 2: Here is the entire Switch Box The first switch on the left control the hallway light. This light also is controlled by another standalone switch...

The Middle switch is the Kitchen light... and the switch on the right is the one I think controls the ceiling wires because it is the only one which does nothing. 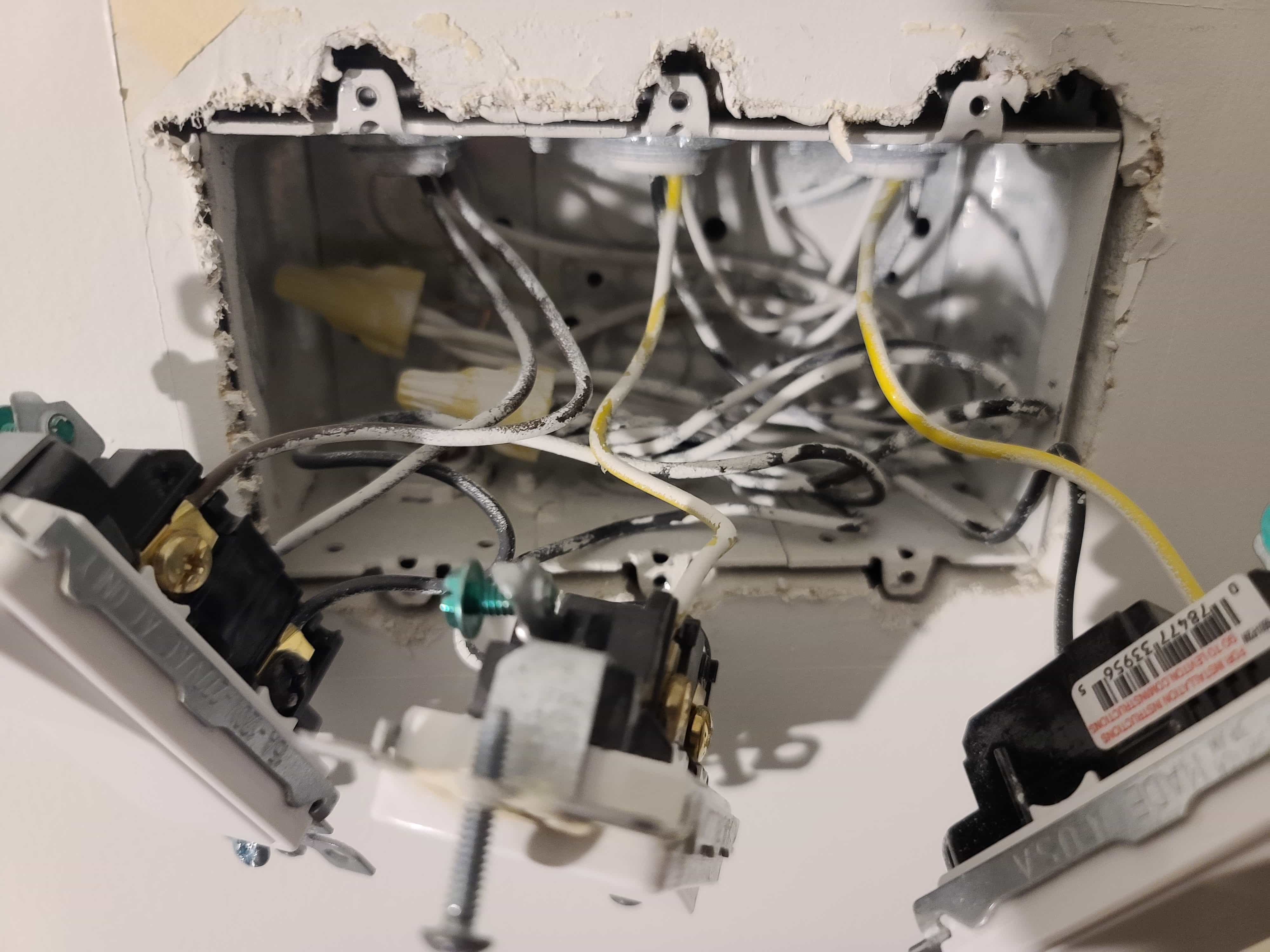 The ceiling didn't have anything connected, it was just a white cap.

Also, I have disconnected the yellow wire from the switch and it still shows a positive charge with the voltage tester.

Update 3: Connecting all the black wires of the fixture to the yellow wire from the ceiling has worked with the switch with no issues. Fitting all the white wires together was a hassle, so if you have a similar setup, make an electrical Pigtail as suggested by the answer.

First, DO NOT split up any of the black and white bundles in this setup. A few months ago we saw someone in almost your identical situation take apart ALL those wires, spread them out, shoot a photo and post it here... and unfortunately this was an older building with cloth covered wires, and colors were indistinguishable. The poor person knocked out power to a neighbor's flat, and had to fork out $300 to hire the landlord's electrician to put it all back right.

Your building is wired in conduit, and so the electrician was able to do something they usually are unable to do: actually color-coded the wires by function. In your case (only), black is always-hot, white is neutral, and single yellow is switched-hot for the lamp.

Your voltage tester is giving you a bad reading because of "phantom voltage" and a quirk of how voltage testers work. We can see plain as day that the yellow wire is correctly wired to a switch. If you install the light and it's really on 24x7, then the only possibility is a defective switch.

I agree with Jasen that you will need to add a white wire to the existing white wires - that's why I say pigtail the lamp whites, so you're only adding 1 wire instead of trying to cram 3 little wires into a nut that already has 3 big ones (not legal and not gonna happen). Even for 4 wires you will need the larger "red or tan" wire nuts.

Crank down wire nuts Very Hard, and pull test them without tape. If you need tape, don't - that is a bad connection that will start a fire. Fix your technique.

Turn off the power to this circuit (you can confirm that it is off using the voltage detector) connect the lamp to the yellow and white wires, turn the power back on, and see what happens.

Not the answer you're looking for? Browse other questions tagged electrical lighting electrical-panel light-fixture or ask your own question.

6
Electrical box - What are all these wires?
1
How to connect my new light fixture that has 2 (+ground) wires to the ceiling box that has many?
0
A light fixture with 2 white, 2 black wires, 1 copper. How do I connect this light fixture to a ceiling junction box? (See drawn diagram)
1
ceiling fixture wires
3
Light Fixture Stopped Working After Replacing Its Three-Way Switch
1
How to connect lighting fixture into ceiling junction box?
1
Wiring issues on ceiling light fixture
2
Install a ceiling light - confused on the ceiling wires color
1
How should I connect a light to box with 4 black wires, 3 white wires?