I just bought a house built in the late 90's. While upgrading some lights in the bathroom, I replaced a recessed can light with an LED version that uses an adapter for the bulb socket and simply fits over the can. The only wiring involved is a ground wire.

After getting the new light setup, I tested it and it worked just fine, including when I had the ground wire hooked to the can. As I was pushing the cover onto the can, all the bathroom lights went out. This included the shower & toilet cubby next to it. I also found that the other 1.5 bathrooms also didn't have working lights anymore.

I find this strange, but evidently code allows bathroom lights to be all on the same circuit as long as the outlets are on a different circuit. I think I still want to separate them out, but that's a different topic for later, I think.

I went to the breaker panel and tripped what I thought was the correct breakers, but I still didn't have lights. Then I flipped all the breakers to make sure I got the right one and still nothing. I ended up getting out my multimeter and taking the front panel off the box, then checking that the breakers were working correctly. They were, but still no lights.

I've searched the whole house multiple times and there isn't any subpanel or anything else I can find with breakers in it, except for the dedicated breaker for the AC unit outside.

I'm going to self-answer, since I finally figured it out accidentally. I'm writing this up so that other people might benefit from my weird solution.

The first part of the problem is that yes, your lights are downstream of a GFCI. Which is not usually required. It may be that someone was in the mode of "I better put GFCI wherever I can and protect everything in the bathrooms, including the light", or it could be that there is another receptacle (bathroom, garage, outside, kitchen) on the same circuit that actually needs GFCI protection.

The second part is right there in your question:

As I was pushing the cover onto the can, all the bathroom lights went out.

You mentioned a ground wire, so this sounds like more than just a simple screw in bulb replacement. But whether that new ground wire was involved or not, it sounds like you pinched or shorted a wire when putting the cover on the can. That could easily cause a ground fault and trip the GFCI. Then you took things out, double-checked everything, etc. and when you put it all back together, everything was OK. Except that you had to find the GFCI and reset. Once you did that, all the lights worked.

While getting ready to call an electrician to figure out what was wrong, and making a last desperate attempt to find a subpanel, I found a "dead front" GFCI in a closet next to one of the bathrooms. I'd already tried testing a GFCI outlet in the bathroom to no effect, so I tested this one "just because". 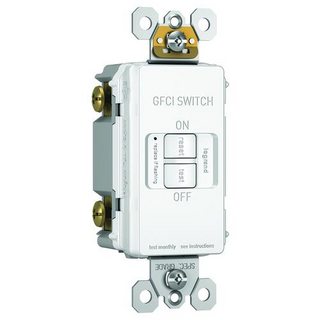 It didn't feel as if it tripped, so I reset it and tested it again, which felt like it tripped as expected. So, I reset it again. As I was going to walk away confused at another oddity of the house, I decided to try the bathroom lights for no other reason as "maybe it worked".

As it turns out, the lights turned on, as did the lights in the other bathrooms. I don't know enough about housing code and electrical systems like this to know why this was done, if it's up to code, what the person installing this was thinking, or how I was supposed to find this when the lights went out, but there it is. If I had anything in that closet, I wouldn't have found this GFCI.

I want to get rid of this situation and do some/significant rewiring, but that's a different topic, I think.

Well, obviously the person went to a lot of trouble to put GFCI protection to the downline circuit, and obviously the lights were accidentally swept up in this. Probably because the person was dealing with legacy wiring that was not easy to change, so the deadfront in the closet was the least bad option.

Nobody cares about GFCI protecting lights. I suspect the purpose of this GFCI is to protect receptacles in the bathroom that are on the same circuit.

(Note that circuits that serve bathroom receptacles aren't allowed to serve outlets in any other rooms, therefore the use of the deadfront instead of a GFCI recep, which is obviously just the same thing with sockets).

That inevitable socket has a Code violation

Any socket protected by GFCI must have a sticker saying "GFCI Protected". It doesn't have to be the blue labels that went into the trash 5 minutes after the GFCI was installed. You can use any sensible labeling method; I like white cover plates and P-touch/Brother labels. While you're at it, you can add a second line of text, "Reset in hall closet".

Not the answer you're looking for? Browse other questions tagged bathroom light circuit or ask your own question.

1
Master showerhead has electrical current, what to do?
2
Help with untangling an ancient wiring mess
0
No power to bathroom lights and two outlets
0
Bathroom and hallway lights keep turning off
0
Line loses power when light bulb is put in
1
Dual Purpose breaker (Eaton type BR Combination AFCI/GFCI) trips when starting blender or vacuum
1
Why are my bathroom outlets and light not working?
0
50w GU-10 recessed bulb sockets not working