Is this sump pump plumbing correct?

We bought our house in 2013. There was a sump pit with a non functioning pump from the day we bought it. The basement was flooded in 2011, which I'm guessing is when the pump stopped working (a considerable amount of water from what I understand).

I finally got around to replacing the pump. I removed the old, rusty pump and replaced it with a new one. I followed the instructions provided by the manufacturer. My issue isn't with the pump or the installation, but rather the existing plumbing to/from the pump. When I added water to the pit, the pump turned on, but instead of discharging the water out into the yard through the discharge pipe (green arrow), it came spouting out of the top of a pipe that drains into the pump (pink arrow).

That particular pipe has a plastic tube feeding into it that runs from the furnace (or ductwork). There is a black valve for that pipe, but if I close it, water comes out the top of the pipe.

Is this setup correct? I don't see how any sump pump would have worked given this setup. I'm way out of my depths here and I need some help. 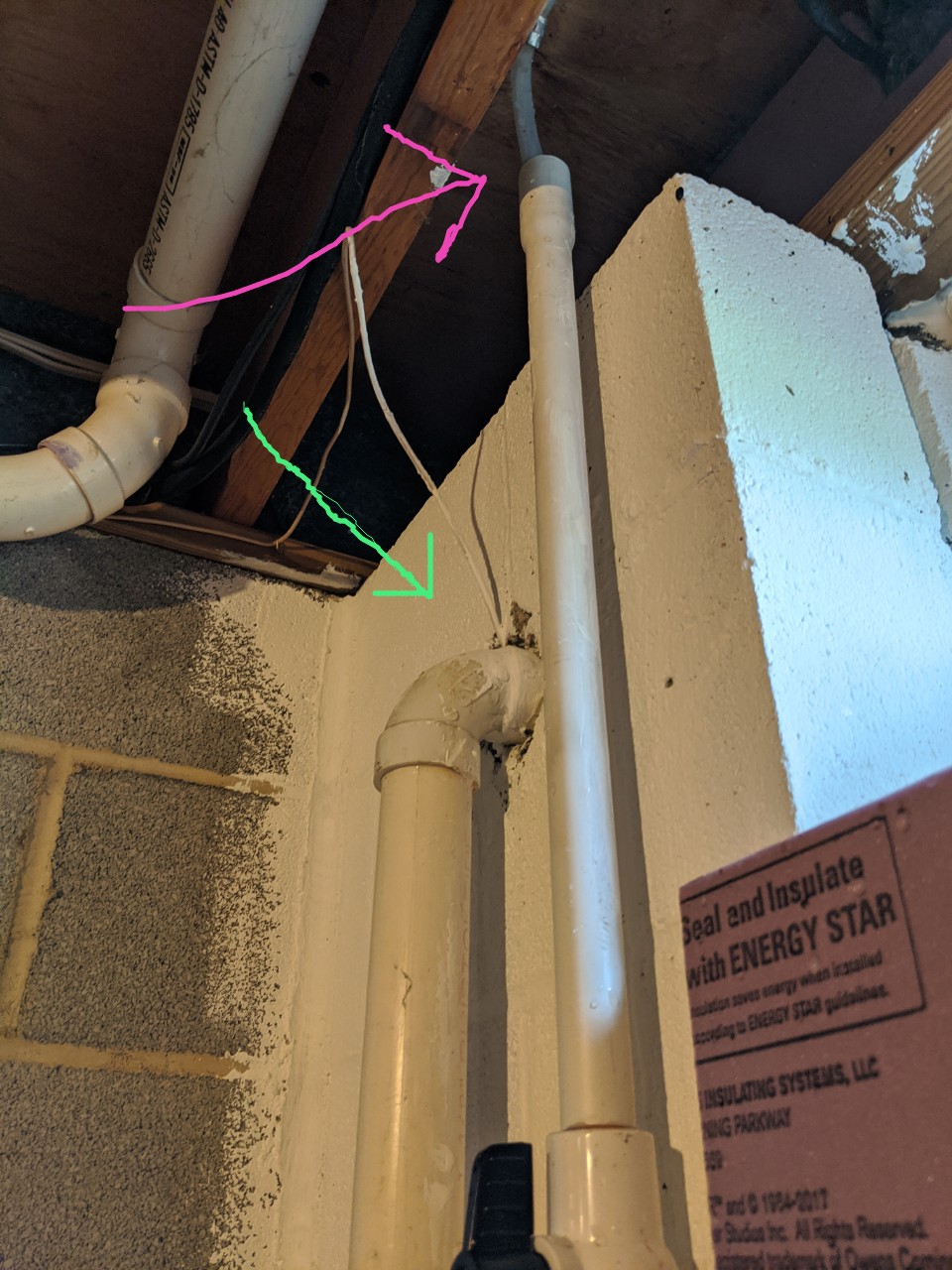 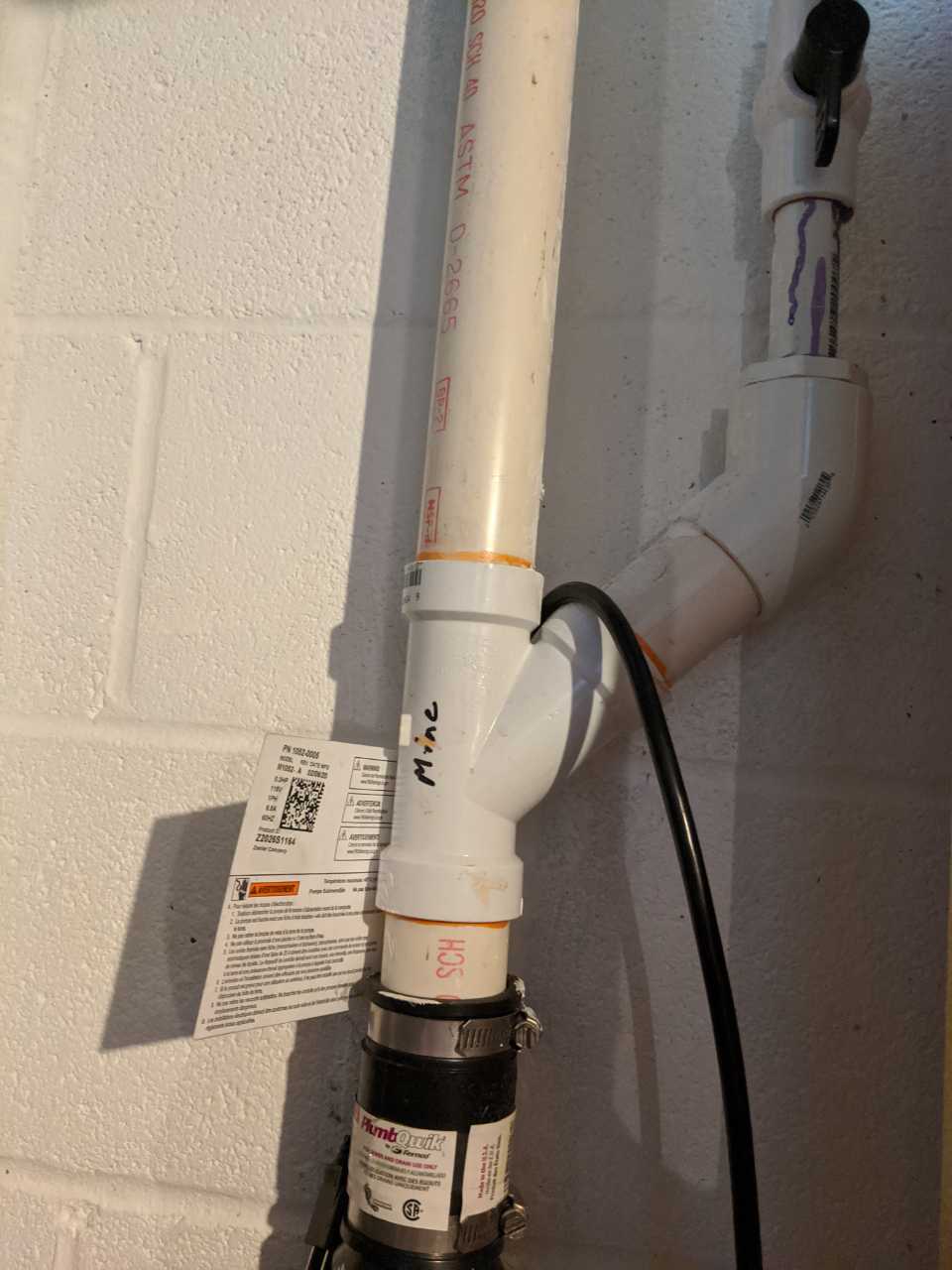 Plumbing is not correct.

You have a condensate drain that's been piped to the sump drain, and the check valve (black thing) is below it. But it would not work if the check valve was above it, either. (edit - perhaps that's just a coupling, not the common "check valve in a flexible coupling" I took it to be at first - does not change the answer.) The backpressure of the sump exit pipe to the exterior is evidently considerably higher than the small height difference to the top of the open tube getting the condensate.

If so, you just need to re-route the condensate to drain into the sump itself, not into the sump's drain line. Leave the valve closed, or cut it off and cap that.

If the sump does not successfully drain to the exterior with the valve closed, perhaps the sump drain to the exterior is clogged, causing more backpressure than when this was set up, and perhaps it worked when the line was clear. Still Not a good setup IMHO, but perhaps it "used to work"...9 years is a long time for things to build nests, or perhaps some trash got jammed in there in 2011 and was never removed.

If you wanted to needlessly overcomplicate things and add more stuff to fail confusingly you could configure an additional check valve so that the condensate drained into the line but the sump discharge did not go into the condensate drain stack. That is not an approach I would suggest, but it COULD be done.

To fix yourself, just replace the small pipe with a pipe that runs from the condensate tube to the sump (with an air gap so it cannot siphon) and close the valve, or cut and cap where the valve was. Possibly clear out the drain if it does not work with the valve closed (perhaps that's why you think you need a plumber now...?)

Not the answer you're looking for? Browse other questions tagged basement sump-pump or ask your own question.

2
Why did my basement start flooding while replacing sump pump?
1
Sump pump running constantly - water coming in FROM discharge pipe
3
Do I need a sump pump in my new construction sump pump pit?
1
Back up sump pump not working
3
sump pump discharge pipe connection broken inside basement
0
Is sump pump supposed to discharge back onto property or onto the street curb?
3
Sump discharge freezing
1
Tips to find where sump pump is discharging
1
Does my sump pump evacuate water slowly due to a perforated pail?