How do I make a height adjustable desk?

Has anyone made their own height adjustable desk? I'm interested in making a computer desk that can easily be adjusted for either standing or sitting.

The lift mechanism could be electric or mechanical, as long as it is not too hard or time-consuming to adjust.

(There are commercial options around, but they start at $700 for the cheapest of the cheap. I'm sure I could make something myself for less that would better suit my needs.)

Update: Just to answer some of the questions in the comments. The desk would be supporting two 22" LCD monitors, a laptop, paper and anything I leave lying around the house long enough for her to throw on my desk. :-)

Also, I live in Australia so importing from many of the places suggested would be impractical. 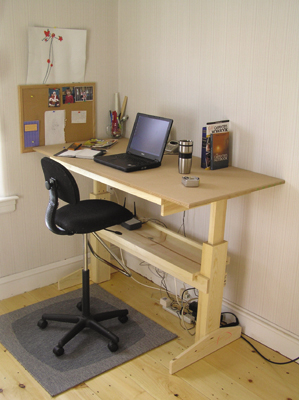 And here is my version of the desk: 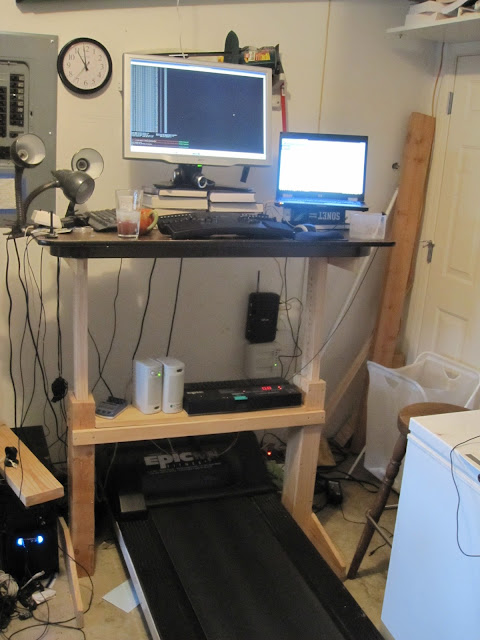 You can adjust it, but it is a little difficult. However, you can fit a modified treadmill under it as you can see in this video of me using the desk. I'm able to type comfortably while walking at 2.2 MPH. 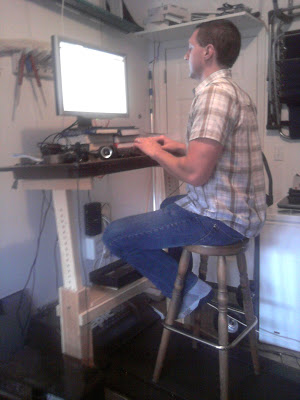 I have a height adjustable desk at work ( not ghetto'ized, like my home version). The linear actuators for my desk come from LINKAK: 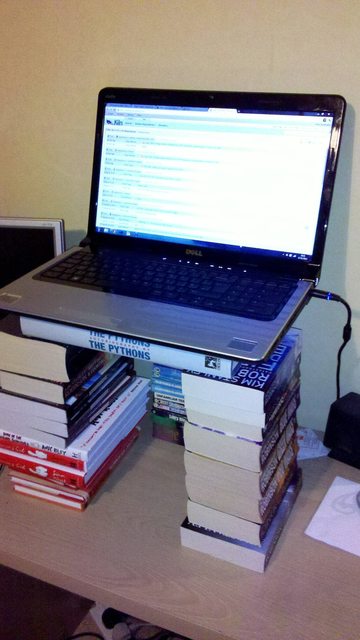 I recommend Kim Stanley Robinson's Bibliography, fleshed out with some Frank Herbert, and a large solid hardback for the top; I'm using 'The Pythons' in the case, but gardening and DIY manuals are equally good candidates.

Fine tuning can be done with Asimov, Van Vogt, Niven, or Simak. You may be tempted to use Ian Livingstone and Steve Jackson, but they're not very good for this purpose as there is too little variation in size.

My setup is particularly quirky; due to my number pad I use the left of my keyboard more. With this in mind I've bolstered the left stack with Simon's Cat, The Bunny Suicides, and similar comedic hardbacks.

This is just my opinion, but I think you might be hard pressed to build one cheaper than you can buy one. If you're just looking for a project, it might be a challenging one. But if you're looking to save money building your own, I don't think you will.

If you own your own fabrication shop and have lots of scrap to use then this might be an interesting build, but for the average DIYer I would say it's cheaper to buy then to build in this case.

If I was going to build one I would probably use a Scissor Jack for inspiration.

Another idea would be to use electric Linear Actuators and a telescoping tube system in the legs to lift the top.

You could potentially use the pistons from some old office chairs, but you would have to make sure the desk top had enough weight to compress them (otherwise you would have to lean on the desk to make it go down). You would also have to physically lift the top to the desired height, which depending on the weight could potentially be a problem. You may also run into trouble engaging the lift/lower mechanism of all the pistons simultaneously.

I came across this product which in itself would not be a solution, but the mechanism for lifting it could potentially be adapted to suit your needs. 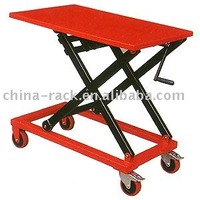 If you want to make a non-traditional desk you could have four posts fashioned together into a frame that goes high in the air. You could then "hang" the desk using an easily adjustable pulley system to raise or lower the desk. The surface could then be on a track system to keep it secure. There would be plenty of caveats but something like this could work if you put enough thought into the design.

I bet you could eliminate a lot of the engineering and fabrication work in making something like this by making a desk that has only two positions, standing and sitting, vs. trying to make one that's continuously adjustable anywhere between its highest and lowest setting.

I'm thinking of something using a four-bar linkage on each end of the desk to keep the work surface flat while you move it from one position to the other, with pins to keep it secured in either position. You'd also want to incorporate some form of torque member to make sure the two linkages rotate together, to eliminate the need to always lift in the left-to-right center of the desk. Something like a closet rod might work for this. If you wanted, you could adjust your linkage geometry so that in the standing position the surface had a slight tilt, but was flat in the sitting position.

Of course you'd be limited in how much stuff you could put on the desk because you'd be moving it by hand and not by electricity. You could use a counterweight in your linkage to offset some of the weight.

I'm a programmer and I currently use a drafting table as an adjustable standing desk. I wanted something that I could use in both sitting and standing position. The table I'm using is similar to the model shown here: 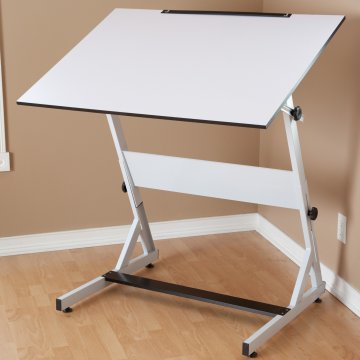 I can adjust the height by loosening the knobs and sliding the upper section upwards. The tabletop can be adjusted to be horizontal. This is working reasonably well and is a fairly cheap solution (actually, I found the table in a store room of our offices, but I have seen similar ones on the net selling for around $150)

There are some negatives, as it's obviously not designed for these purposes:

I've always been interested in this and always thought the easiest way would be to use a cantilever design and a weight on one end that would allow easy adjustment up and down. Then you'd only need a friction knob to hold it in place. If the weight on top of the desk changed, you would just adjust the weights on the lever.

Been thinking about this all day and I came up with two ideas, both less than desk-like to keep the costs down.

I finally got around to actually building a real stand-up desk.

I ended up using metal stainless steel wire kitchen shelving...the kind you can get at Costco and the like. I didn't place any shelves between keyboard height and the top and used the keyboard height shelf as my actual desktop, then rigged a 'half shelf' above that to place my monitors on. I've since found that the wire shelf systems also have half-width shelves available for that type of task as well.

It's not adjustable in the sense that it raises and lowers whenever I want, but it's a really affordable stand up desk. As a bonus, it has wheels (easy to move) is steel (so can put notes everywhere with magnets) and is wire mesh (so it's easy to run all my cabling and zip-tie it all up).

My next goal is to find a height-adjustable stool that I can use on occasion when I do want a break from sitting.

Found this link to a build it yourself in wood article which might satisfy your needs... its more of a laptop table rather than taking your suggested two monitor config but might give you some ideas for a larger one...

So, this thing isn't "adjustable" per se (at least, not after it's all put together), but I designed and built a standing desk a while ago that has been serving me well. I documented the build process here: 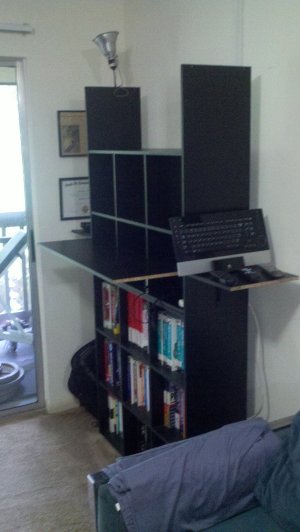 I made it entirely out of pre-existing products, so it took no carpentry expertise at all to build this thing. (I don't have any such skill, so that was kind of a prerequisite.) It also only cost about $100 to build, which is pretty cheap as far as desks go - and beats the hell out of $700.

This is better suited to be a computer workstation rather than a true "desk", but if that's what you're going for anyway, I think this is a pretty good option. I've been using it for a few months now, and I'm generally a big fan. It's helped me out with some knee and hip/lower-back pain that I was having previously (from sitting too long), and generally makes me feel less lethargic when I use it.

I will say, though, that I also tend to have a harder time concentrating (when working on something really cerebral) when standing rather than sitting, so there is a bit off a trade-off to be made.

You could purchase or copy the design of the 2-height desk at 1:12 in this video:

It is made by ResourceFurniture.com

This page has a short video demonstrating it's operation:

Here it is shown integrated with a wall-bed: 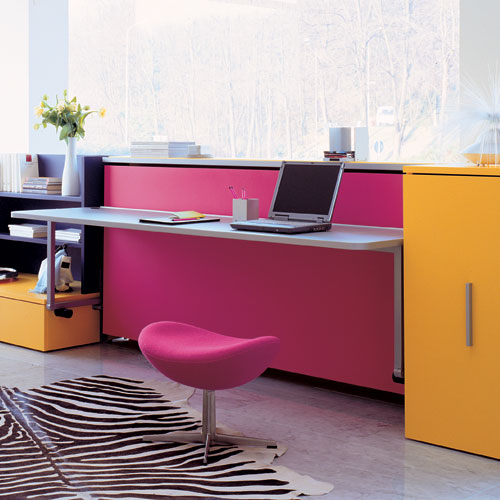 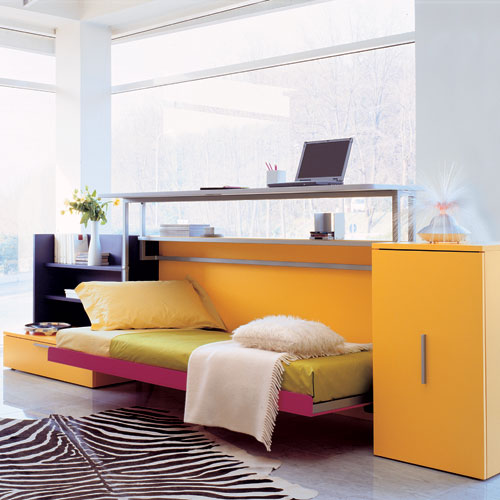 I think the biggest thing with the "push button" legs would be the ease of the ability to raise/lower the legs evenly when there's a load on them. The "push button" legs might be a bit tough, I.E. you push the button in and the leg shoots down because it's now free and there's a load on it and it pinches your finger or snaps down to the next level, not to mention you'd be raising one leg at a time and you'd have the added trouble of the load on the desk potentially being on a slope for a bit while you adjust the other legs.

My home office is an ex-cupboard, 1m wide. My desk is a piece of wood 99cm wide which rests on pairs of battens on the walls. I have one set of battens at the right height for sitting down on a chair, and another set higher up for when I'm using my stepper machine or standing.

Since all that sits on my desk (plank) is a laptop and one piece of paper, it is not difficult to lift the plank out and up/down to a new position. I do have to adjust the laptop screen angle.

When sitting I prefer to use a separate USB mouse/keyboard, and these sit on a retractable tray (a plank on drawer sliders) just below the lower battens. I have shelves for all the other junk.

Bet this is the cheapest option you can find, especially as the stepper machine was 99p on (local pickup) ebay!

There are commercial options around, and they go for a lot cheaper than $700. Look into the used office furniture business, where most items are offered for less than half their retail price. If the price is low enough it extends the range items can be shipped to you.

School / government / institutional auctions are possible too, but the desired items are much less certain to be present.

Geekdesk.com does sell just the frame of their desk, which knocks a good bit off the price AND the shipping, possibly making that a good starting point for such a project. ergodepot.com does the same (with many more frame styles), but they are more expensive.

Not the answer you're looking for? Browse other questions tagged furniture desk or ask your own question.

11
Devices that can slowly lower and raise 200 pounds ~2 feet?
1
How can I transmogrify a fixed monitor post in to a variable height monitor post?
0
Lifting mechanism for height adjustable sitting standing desk

4
Repair gouges in a particle board desk?
5
How can I build a wall mounted adjustable height desk?
2
How can I support a desk without legs or brackets
2
How can I repair a bump in a wooden desk?
0
Lifting mechanism for height adjustable sitting standing desk
0
Stable Legs for Desk
0
Bracket specification for wall-mounted desk
0
Wall guide for sit-stand desk to improve stability