Can someone provide a diagram for this? I am finishing my basement and will have multiple outlets where the bottom outlet will be switched from two locations. I understand how to do this with one switch (attached diagram) but not positive on how to do it with two switches. Just to give a little more info (not that the physical location really matters), but there will be the first switch, then multiple outlets, then the second switch, then a couple more outlets.

receptacle multiway-switch
Share
Improve this question
asked May 14, 2020 at 3:02

Jack has answered your question. Since /5 cable does not exist, you are forced to either use conduit as Jack proposes - and I gather that is not a wiring method familiar to you that you are comfortable with, more's the pity because it's a nice one. EMT or smurf tube between the points, pass the 2 yellow travelers straight on through, wire up the rest as usual.

Since you want to go cable, you need two /3 cables.

You already know how to wire it if a 3-way wasn't involved.

You will need to wire the other 3-way as if it was a spur off the first 3-way. So electrically, it will be an independent /3 branch, and will not share ANY wires with the receptacle /3 wires.

Physically, as you know, the two /3 cables will run nearly the same route. That is true. So I understand the temptation to "save one wire". However you cannot do that because it will introduce unequal currents in the two cables. Current will come out one traveler, and return on the switched-hot in a different cable, and that inequality of currents is not allowed.

What's more, it wouldn't save much wire, and, it would create a serious box-fill issue in the second switch as you'll have 3 cables converging there. (so a 27 cubic inch box!!) "The next guy" working on the switch won't understand what's going on. This way it stays straightforward and Code legal.

The /3 "spur" to the other 3-way contains 2 travelers (yellow) and always-hot (black). Each 3-way gets 2 travelers. The origin 3-way common goes to switched-hot (red). That way there is always-hot at the far 3-way in case you fit a neutral-less smart switch someday.

Your diagram would look something like this if installed in conduit. I'm just trying to show the wiring and not any cable configurations. The yellow wires are your travelers which are needed for a 3 way switch. The links on the outlets need to be removed on the hot side. The hot and neutral are run to the last switch because the OP stated there will be more outlets. In my humble opinion, conduit would be your best bet. Some of the real experts will chime in. 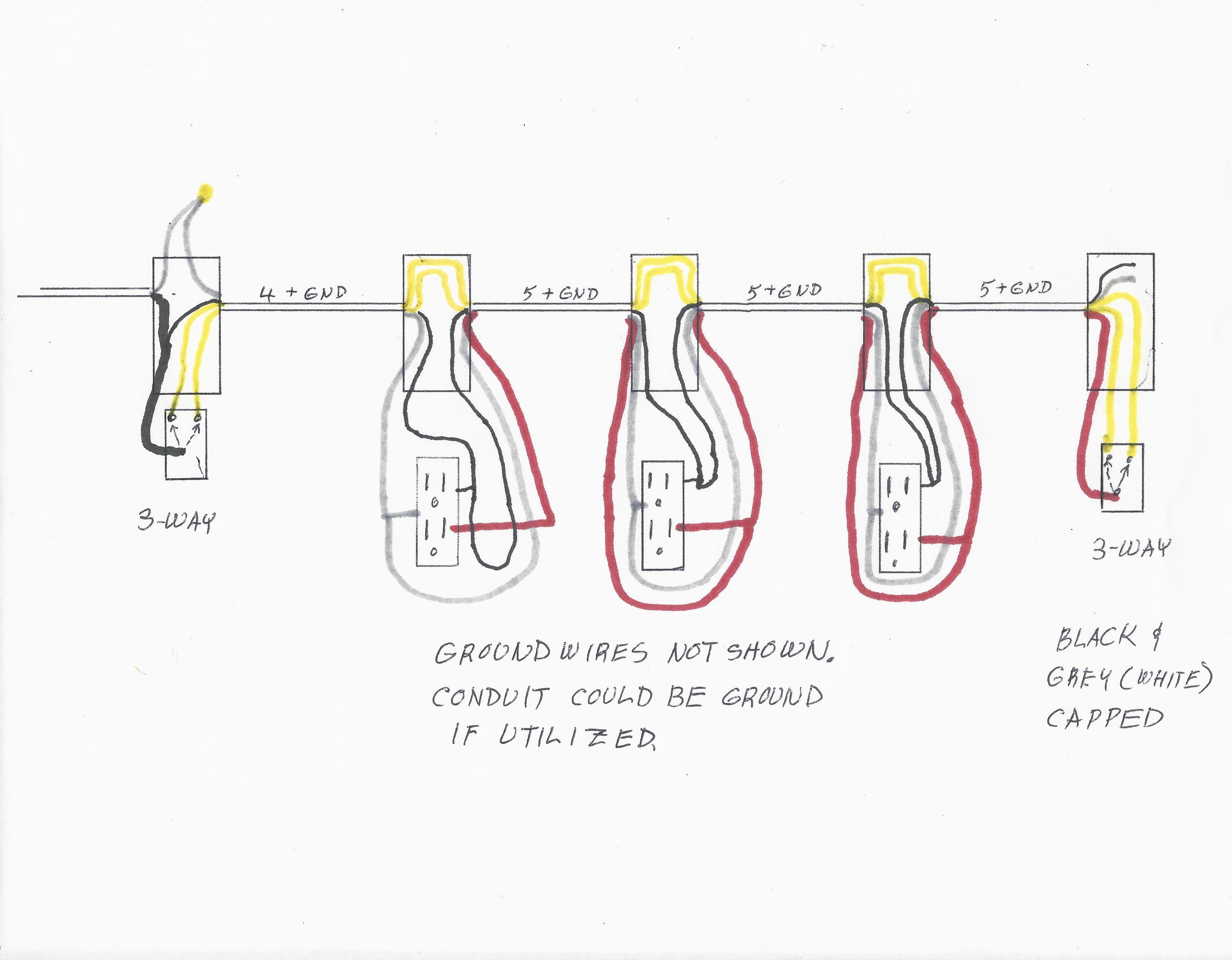 There are two paths you can go down here

Your situation, with switches and receptacles intermixed freely, leaves you with two sane ways to wire this. Either you can use a traditional traveler-style 3-way, and wire this using individual 12AWG THHN wires in ENT conduit (aka "smurf tube"), or we can stick with NM cable, but that requires us to use 12/4 NM and a different way of wiring the 3-way switch called a "California 3-way" (not to be confused with a Carter 3-way, which is both utterly obsolete and quite illegal) unless you wish to faff about with multi-cable NM runs.

Smurf (tubes) are your friends!

It used to be that running just about any sort of conduit system was a costly and highly labor-intensive affair, requiring harder-to-work with metal boxes, extra fittings, and oftentimes the manual labor of bending and coupling rigid sections of conduit together. However, nowadays, what is known as Electrical Nonmetallic Tubing, or "smurf tube" colloquially, is used as a mains wiring conduit in addition to being deployed in low-voltage/communications applications. It's made from PVC, similar to the rigid PVC conduit you often see used outdoors, but is pliable enough to be easily bent, run, and fished in much the same fashion NM cables are, and provides much more flexibility and expandability than NM, while being able to be used with plastic or metal boxes, unlike metal conduits.

In your case, a 1/2" ENT provides plenty of room for all the wires you need, and you can use 12AWG stranded THHN wires inside it, which makes pulling the wire through the conduit a rather trivial task provided you don't exceed the 360° bend limit for any single run of conduit. You'll need bare or green for grounds between all the boxes, white for the neutrals between all the boxes, black for the always-hots between the boxes, and two other colors other than white, grey, or green for the switched-hots and travelers. For instance, you could use red for switched-hot and blue or yellow for both travelers, since you don't need to distinguish the travelers from each other.

Once you have the 1/2" ENT run between all the boxes, and your 12/2 homerun pulled to a convenient box, we can start wiring this. At the first switch location, black goes to the common (differently colored) 3-way switch screw, green gets tied in with the rest of the grounds and pigtailed off to the 3-way switch's green screw, while the two same-colored 3-way switch screws get connected to the traveler wires, and the switched-hot and neutral are capped off individually in the box. At each box with a receptacle in it, the always-hot, switched-hot, neutral, and ground wires are connected to their mates from the 'other side' and to pigtails going to the receptacle (with its hot-side tab broken, of course), with the travelers simply run through the box to the other side. At the other switch box, we then connect the travelers to the same-colored (traveler) screws on the 3-way switch, and pigtail the switched-hots to the common screw on this 3-way switch, then connect the grounds to each other and to a pigtail on the switch, and finally run always-hot and neutral through to the 'other side' of this box. Last but not least, where the power comes in, we incorporate the always-hot, neutral, and ground from the homerun into their respective wire junctions at the box.

Off to sunny California we go...

Apparently, a common practice in construction in California was to use half-switched receptacles like this for most lighting, with control from two different switch locations. As a result, electricians over there came up with a clever way of doing 3-way control that provides both an always-hot and a switched-hot at both ends with a minimum of wires at the cost of not being extensible to more switch locations with 4-way switches, unlike traditional traveller-system 3-way wiring.

For this, we'll need to run 12/4 NM cable (yes, such a thing exists) between all the boxes involved. This gives us a black always-hot wire, a white neutral wire, a bare ground wire, a red switched-hot wire, and a blue switch common wire in each box. At the switch locations, the always-hots are connected together and to a pigtail to one of the traveler (same color) screws on the 3-way switch, while the switched-hots are connected to each other and to a pigtail to the other traveler screw on said 3-way switch. The switch common wires, then, are connected to each other and to the common terminal on the 3-way switch. Finally, the neutrals connect to each other (or are capped off if they're the only neutral for this circuit in the box), and the grounds are made up as usual, with all grounds in the box connected together, and a grounding pigtail to the switch grounding screw incorporated.

Not the answer you're looking for? Browse other questions tagged receptacle multiway-switch or ask your own question.

0
Outlet appears to be switched but switches don't work
2
Remove switch from switched outlet
1
Replaced Outlet and Switch, Now Light Won't Turn Off
1
Capped off outlets and light switch wiring, now no power to half the house
0
Double Outlet, Half Hot, 3-way Switch
1
How do I create a 3-way switch UX for people in my house?
1
New outlets installed with wires for switch control, but tabs left intact
0
Multiple outlets between two 3 way switches