How should I run this conduit for security cameras across a flat roof?

I am putting in three new security cameras on a far corner of a building that already has cameras around all the other sides. The reason this corner was left for last is that it is the hardest to run - there is no way to run cable inside the building so the only way to install it will be a 65 foot run along the edges of the flat roof.

In the image below, the red line indicates the cable path and the yellow circle is the camera mounting location (for all three cameras, facing different directions). 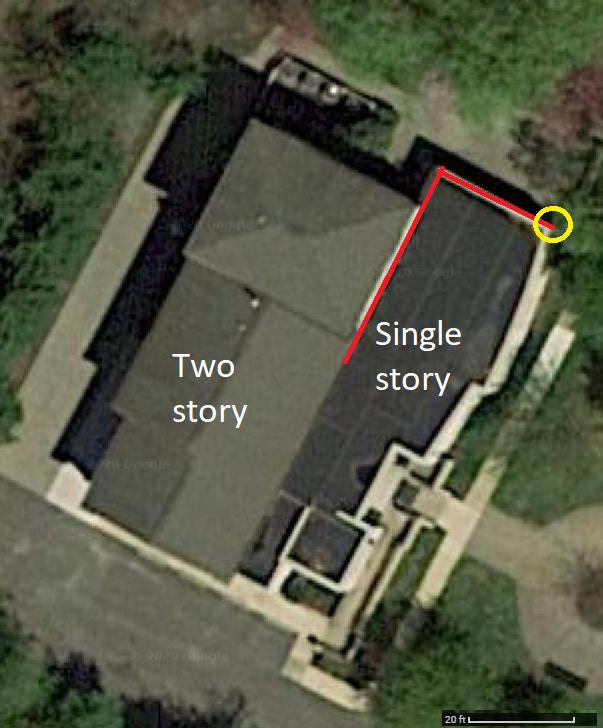 As I see it (and as several installers and electricians have told me), I have three options:

I mentioned the first option just for completeness. I really don't want to do it, even though it is the easiest and cheapest, because I'm worried about animal damage and about how to secure loose cables to the building. So it will have to use one of the two conduit types.

The primary issue is how to properly secure it to the building.

The first 30 feet of the run are alongside a taller part of the structure (which is also where the cable comes out from) so I can anchor either type of conduit to the wall. After that the roof has a short parapet (between 0.5 in tall at the left side of the picture and 4 in tall at the right, as the roof slopes to allow drainage) and the cables must run along the top of it or just inside it.

I think that a single run of liquid-tight all the way from end to end might be the easiest way to do it. However, I don't know how I would attach the liquid-tight to the roof. The entire roof was just redone, and I don't feel comfortable drilling all the holes in it that would be required to keep flexible conduit in place.

If I run Schedule 40 PVC, I can rely somewhat on the rigidity of the conduit to use fewer attachment points. There is another solid conduit already on the roof (not installed by me) that is not attached to any flat roof surface but is still solidly attached to the building in several vertical locations and has weathered many major storms over approximately the last 7 years. However, a run this length will probably require at least one expansion joint to deal with temperature changes and will require at least 10 conduit pieces and fittings to be glued together. Each additional one of those joints is another possible entry point for water in the future. I will also need to secure a junction box at the corner in order to transition to liquid-tight over the edge down to the camera mounting boxes on the wall.

It seems like there are so many downsides to both conduit methods that I should just run outdoor cable and not deal with the other options.

What is my best option for running this cable?

wiring roof conduit
Share
Improve this question
asked May 13 '20 at 3:52

Attach to the wall and the back of the parapet. Drilling holes in the flat or sloping parts of a roof can end in tears down the line.

Consider passing the wire through the parapet instead of over it.

Conduit joins welded using the correct method, solvents and glues will not leak.

Not the answer you're looking for? Browse other questions tagged wiring roof conduit or ask your own question.

1
Is it useful to paint outdoor conduit white to reduce the temperature?

2
How do I set up drains for a flat roof?
2
Proper method to send wiring through the roof?
2
How many 12-2 cables can I put in a short run of conduit?
0
Securing Cables at Ends of Conduit Run
0
Caulking/Sealant for Conduit Pipe on Roof?
2
Appropriate conduit for several data cables underground over 300' run
1
Is this plan for running a circuit in buried conduit correct?
11
Should an optical cable inside a house be run in conduit?
0
How to connect liquidtite to schedule 80 (or 40) pvc conduit?
2
Fiber vs STP vs UTP for underground conduit run to backyard office?