How to diagnose single tub faucet with no hot water?

The hot water for my roman tub faucet (for a tub deck) doesn't work. Turning the handle releases a small amount of water, but only for a short moment. I knew this was a problem when I bought the condo, but just never got around to repairing it. Now I want to see if I can fix it. My question:

The faucet is a 3-piece faucet. It kind of looks like this: 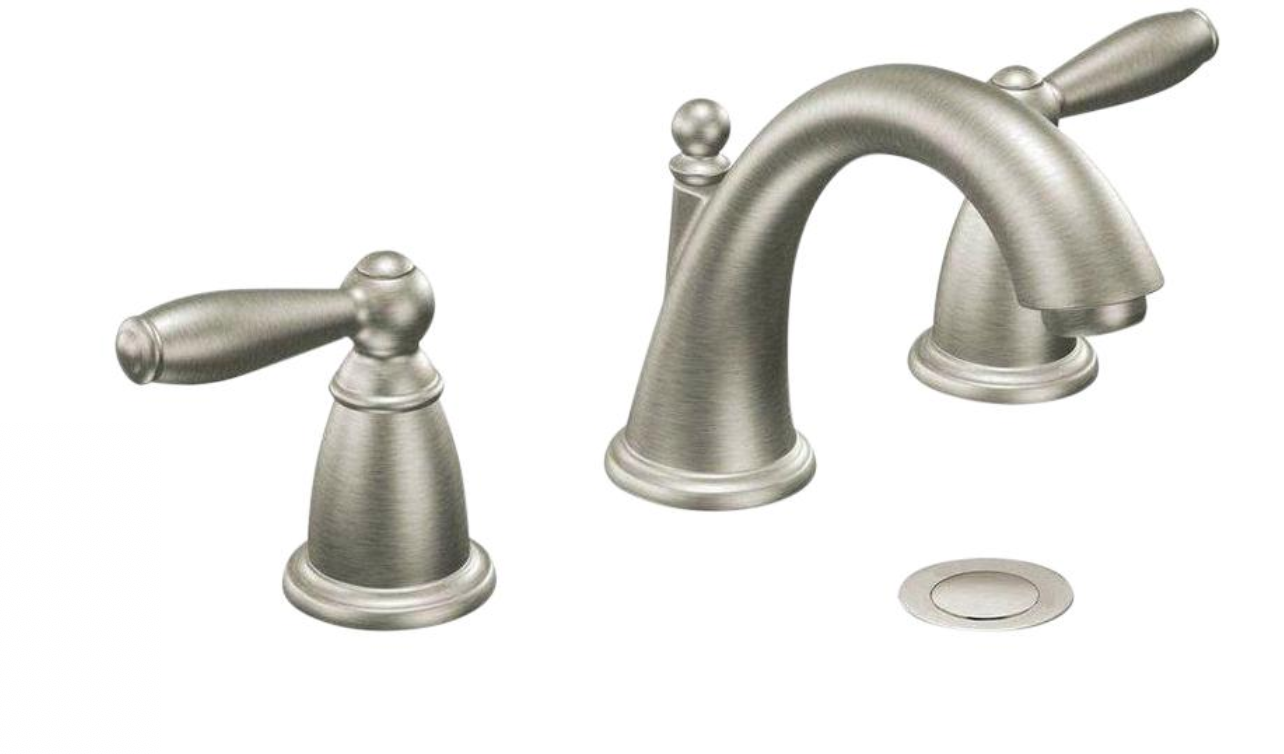 Update: I installed a new cartridge this weekend, which did not resolve the issue. However, after turning the water back on, a handful of the sinks in the house released black sediment of some sort, and one of the lavatory sinks (in the same bathroom as the roman tub) no longer works (no hot or cold water). This seems like a very random effect of changing the tub's cartridge.

If you're handy at all repairing this type of faucet is typically not a big deal. I'm assuming from your description that the cold water side works.
As you indicated, it could be calcium build-up but it might not as well. The problem is almost always with the cartridge and occasionally in the shutoff valve. Turn off the water supply to the faucet. Hopefully there is an accessible shutoff. With the water off you should be able to remove the handle and any retaining nut that would be holding the cartridge in place. They're all a little different so watch carefully how you take it apart to make sure you get it back together properly. Sometimes the cartridge will unscrew. Once it's out the best approach is to replace it. Usually your local home center will have one. However, check it for debris. I've had situations where the washer in the shutoff valve had crumbled and pieces of the washer were blocking the flow. If that's the case come back and someone will walk you through how to repair/replace it. I've included a picture of a Moen cartridge for a roman tub faucet so you know what it looks like. Yours may be different. 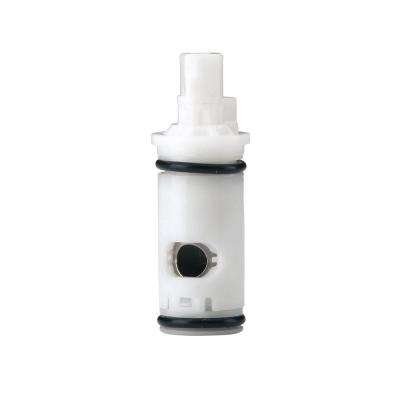 Edit
First, are you on a well or on city water? Wells sometimes kick up sediment that can get into the water system.
Obviously, debris is coming from somewhere in your water supply lines. I can't tell you specifically where but I can possibly help you track it down. Since it's occurring at several locations throughout the house the problem must be somewhere in the main water line at some point before the pipes split off to supply those faucets.

Hopefully, this will help identify the cause - if not, you need to call your water company and see if they've been doing any repair work in the area. Good Luck!

One year after posting this question, I've finally resolved my issue so I thought I would answer my own question to share where the journey led me:

Step 1: Try Replacing Cartridges As HoneyDo mentioned above, the first thing I tried was to replace the faucet cartridges. The tub didn't work when I made an offer on the condo, and I had a plumbing inspection completed at the time: Replacing the cartridges was the suggestion from the plumbers. The quote for this was $300 and it took me less than $50 and about 15 minutes to do the replacement myself. This did not fix the issue. I might have been able to do this for free by contacting Moen for the cartridges (I heard they provide lifetime warranty), but I didn't think of that.

Step 2: Try Replacing Rough-In Assembly The specific faucet I have from Moen is installed with a pre-built rough-in assembly made out of copper. I thought this might have been clogged, so I purchased the assembly on Amazon and installed it. This was a more expensive and difficult DIY task. I have Pex pipe and so I had to solder the pex adapter to the copper rough-in assembly and then crimp the pex to the adapter. I didn't have the tools for this, so after renting a crimper and buying a torch, the adapters, fittings, and rough-in assembly, it cost about $300 to fix and took me about a day to learn everything and get it done. This also did not solve the issue

Step 3: Try using air pressure to dislodge the clog At this point, I realized that the issue I had was not accessible near the tub so I starteds to think it must be an issue in the pipes themselves. Rather than tear apart sheetrock to access the pipes I tried to use air pressure to release the clog. Basically, I plumbed a three-way assembly with 1) hot water incoming from clogged line with shut-off valve, 2) Compressor adapter for air input, and 3) valve with hose adapter. I then pressurized the line with air and turned on the water, and opened and closed the valve over and over again. This helped and increased my water pressure, but was not enough.

Step 4: Think about any Devices that might be installed on the water line! This really should have been step 1 for me, since it ended up being my issue. But after talking with a number of plumbers about my issues, I'm convinced not many people would have thought to look for this: My tub has a thermostatic mixing valve (TMV) installed for the hot water line. This was not located in my bathroom, but was behind an access panel in my master closet. The device mixes cold water with the hot water to avoid scalding bathwater temperatures. In my case this had become fowled.

Step 5: It might be time to replace pipes I actually came to this conclusion after step 3. I came across the TMV only by cutting holes in my ceiling to trace the hot water line to the TMV. When I found it, I was relieved that I wouldn't have to replace the pipe, but also bummed that I could have easily replaced the TMV without tearing apart my condo. But if I hadn't found the TMV, replacing the pipe would have been the next step.

0
Should I turn off the cold water while replacing a hot water faucet stem?
1
Hot Water stopped working in Kitchen Faucet
0
No Hot Water in Kitchen Faucet, hot water runs to dishwasher but not to faucet
2
Water comes out of the shower head when faucet is in tub fill mode (I know why, but not how to fix)
0
Reduced hot water pressure after closing and reopening water supply in one upstairs tub
0
How safe is it to keep and use a mildly corroded hot water valve?
1
How can I decrease water flow to tub spout?