I’m having my backyard dug up and regraded next week in order to install sod and so I figured I’d try and take a stab at designing and maybe installing an irrigation system as the area is not very large. I know there’s a lot here, but any guidance would be greatly appreciated. Here’s what I’ve gathered so far:

I’m in the Massachusetts so I will need to take this into account in terms of winterizing the system. There is generally good drainage and it is mostly sandy although with some areas of clay. We will also have a layer of top soil put in with the sod.

I’m not sure on the water meter size, but I think it’s 5/8” per the below image. I’d call my local water and sewer department, but they have been closed since March due to COVID. 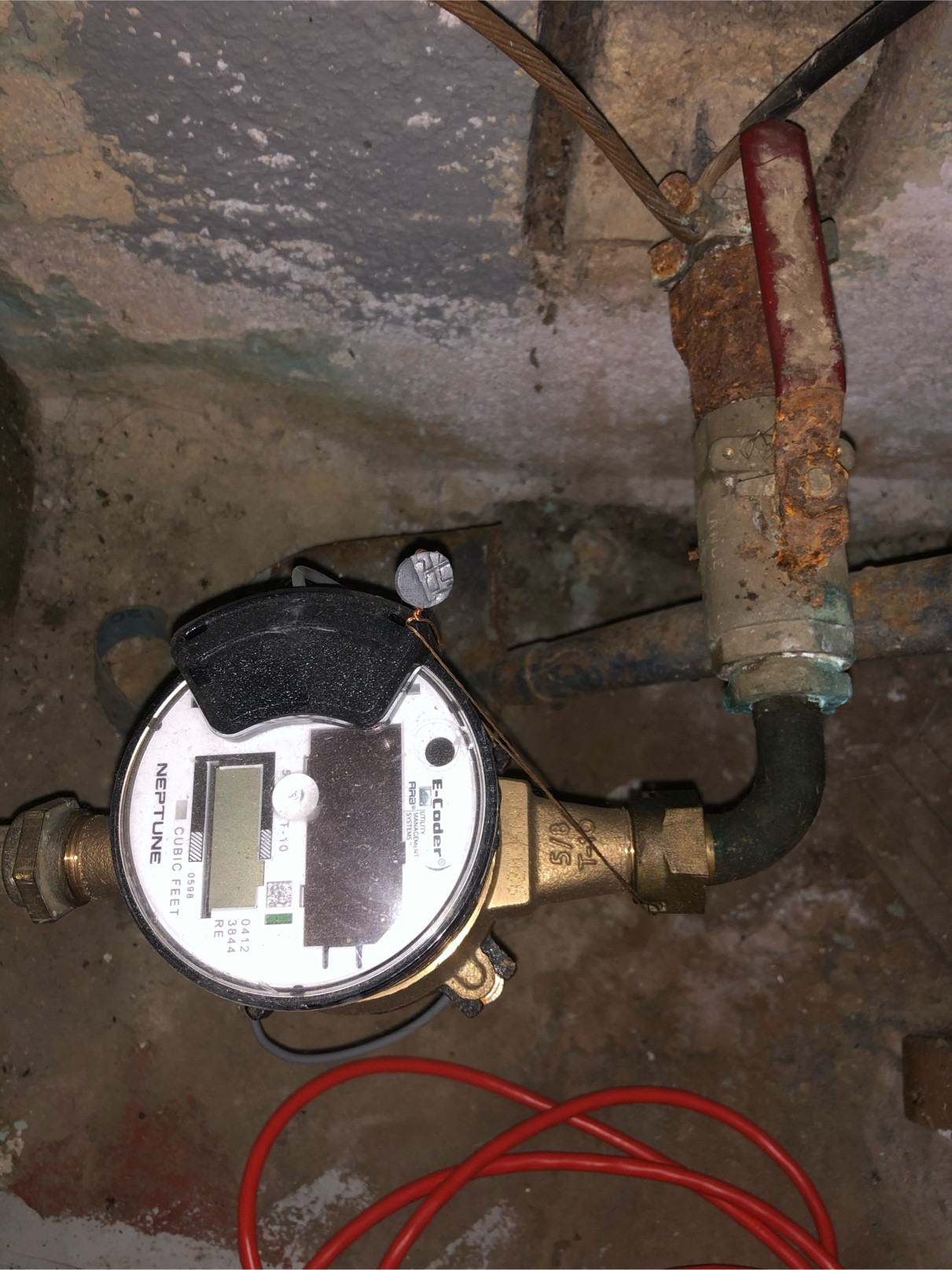 My flow rate is a bit difficult to measure because the spigot is really close to the ground. I tried through a 50 foot 5/8” hose into a 6 gallon container and that took almost exactly 1 minute. Measuring with a 1 gallon bottle direct I got about 7-8 GPM, but it’s difficult to measure with that small of a container.

My pressure seems to come in fairly consistently at about 84 PSI, but my vacuum breaker is slightly leaking. Measuring from another spigot I was getting 90-96 PSI (although it’s much closer to the supply line, but they both stem off from the same line which is a 1/2” pipe, that comes directly out of the water meter, into a 3/8” pipe). I know this is high - I’ll come back to this in my questions at the end. 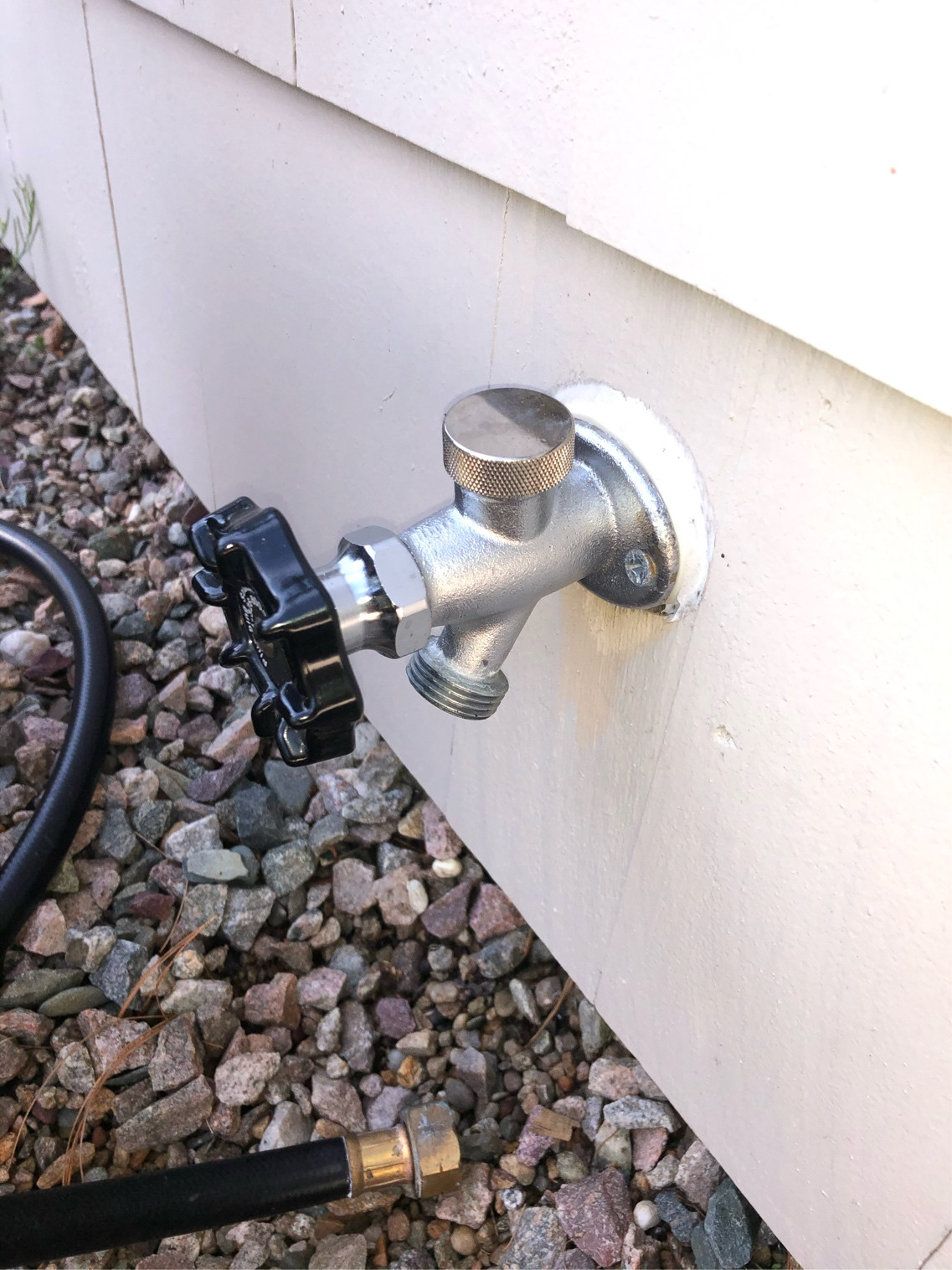 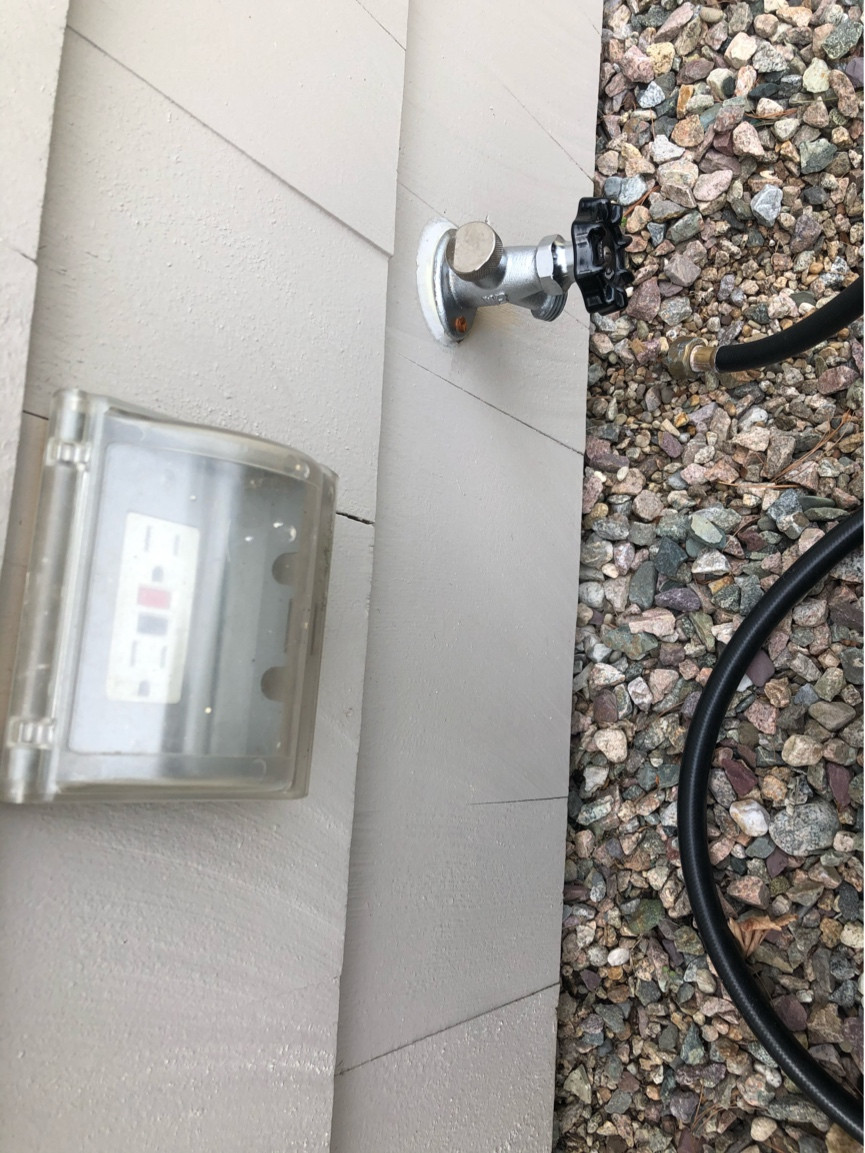 I believe modern frost free spigots like this should also have backflow prevention so I don’t think I need to install anything additional for that (provided I fix the vacuum breaker or washer or whatever it ends up being)?

I used the Orbitz online design tool to build a layout of my property. I’m not particularly tied to using Orbitz products and am certainly open to suggestions, but I appreciate the ease of use of this tool and them telling me pretty much exactly what to buy.

Here is the layout I’m working with 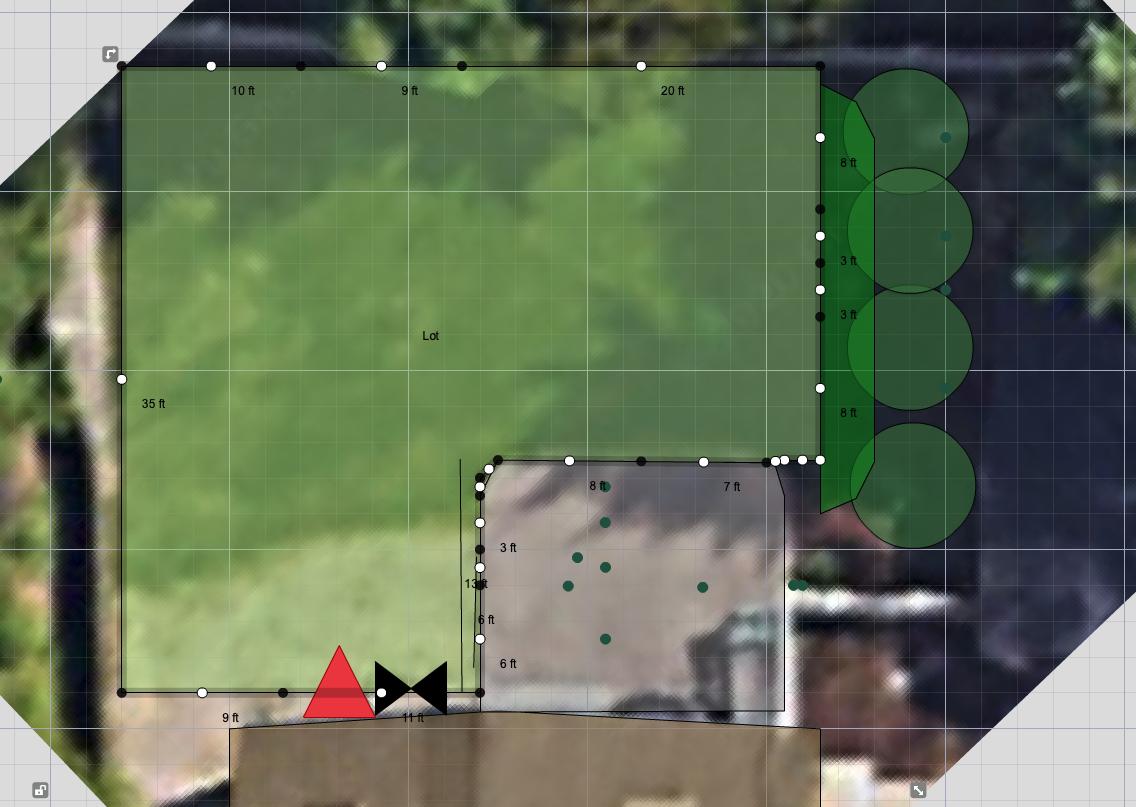 The red triangle is where the water connection is. There is also an outdoor plug right there. The deeper green area on the right side is hedge where there are mostly hydrangeas. The property will be graded such that the top of the picture will be the lowest point. The property is surrounded by a 5’ fence, trees, the house and a garage so wind is not a significant concern.

For this plan the Orbitz service only allowed me to enter a max supply line size of 1” and PSI of 75. I conservatively went with 7 GPM for flow rate. 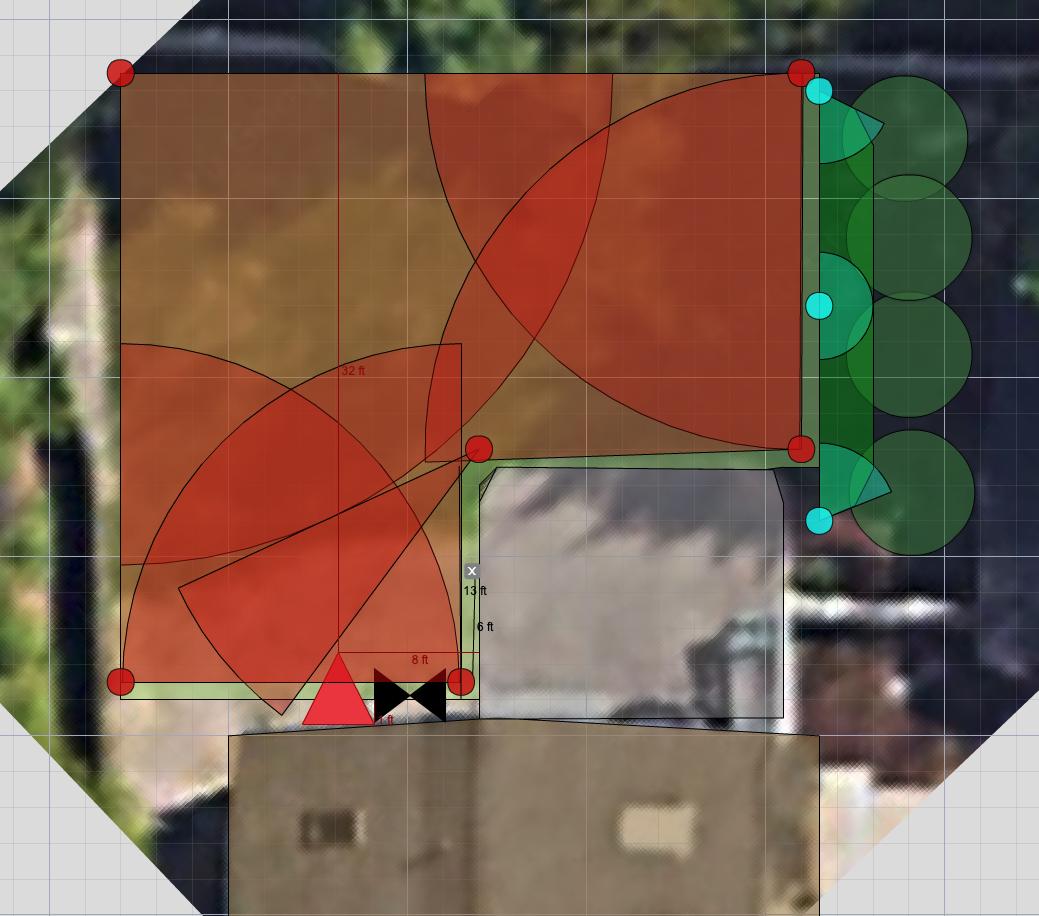 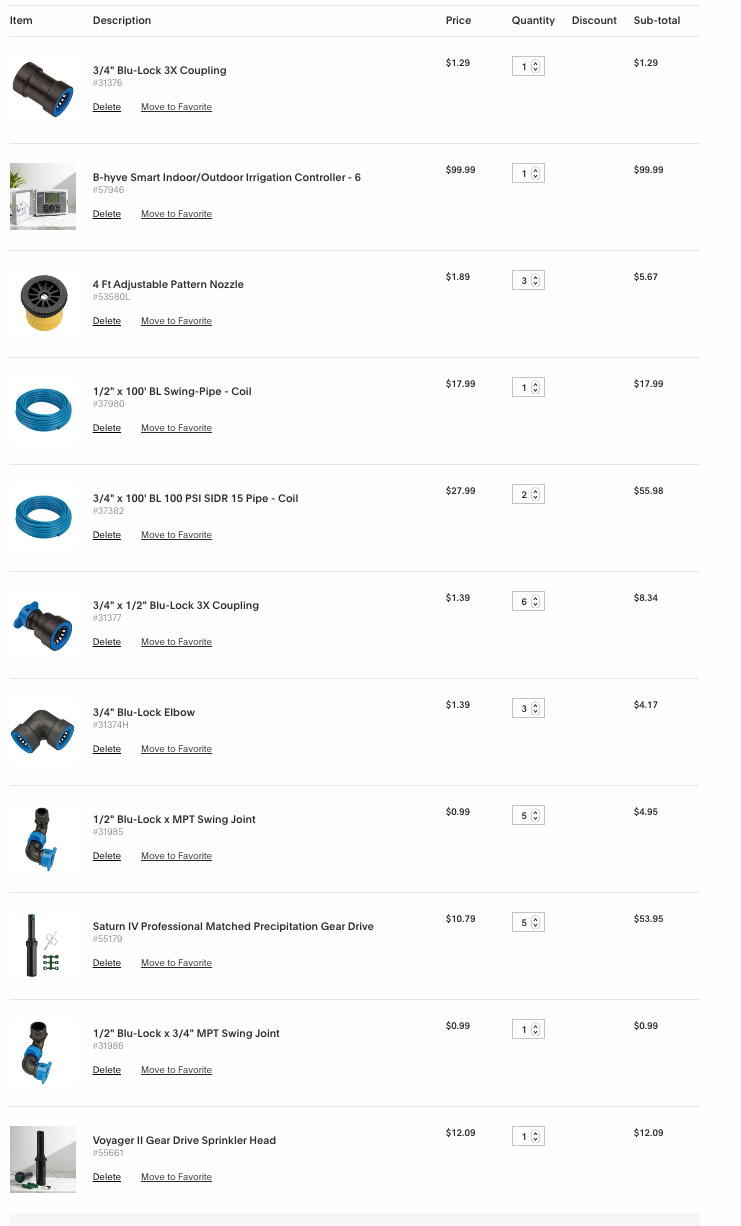 electrical plumbing irrigation
Share
Improve this question
asked May 11, 2020 at 15:43

The pre-work you've done lays the foundation for a great system. Good job.

Use a pressure regulator

The length of throw, the precipitation rate, and the GPM flow requirement quoted for a particular sprinkler all are based on an assumed pressure. That's commonly around 45 PSI, but check data or information sheets from the manufacturer to be sure. If you can't find published data then move up to a higher tier of sprinklers or change manufacturers. When a sprinkler is run over its nominal pressure it'll throw too far, make more noise, atomize the water smaller (and thus be more susceptible to wind drift), demand too many GPM..

Winterization (Drain or not?)

There are two schools of thought for winterization: design the system to be drained or plan to blow the water out with compressed air. Draining could be manual or automatic. Either way draining takes up-front planning and somewhat careful construction. Automatic draining is maintenance free (unless/until the drain plugs clog). It does consume more water because all the pipes are filled and drained with every operating cycle, and it's more noisy (popping and hissing) when the sprinklers first come on and expel the air from the pipes. Manual draining and blow-out both avoid those drawbacks but require attention every fall. Blow-out can require a sizeable compressor -- a pancake style won't do. If you choose blow-out or manual draining then you don't need the automatic drain plugs etc.

When rigid riser pipes were the norm burial depth had to be kept within about 6-10 inches. With the connection to each sprinkler made by swing pipe, often called by the Toro trademark "funny pipe," burial depth is largely a matter of preference or convenience.

Slope really only matters in a manual-drain system. It matters little if winterization will be done with compressed air. In an automatic-drain system you can figure out where the low points ended up and add automatic drain plugs at those places. Remember that those plugs eventually fail, though, so document their locations -- but consider controlling the slope of the pipes so that the auto drain plugs can be put in locations that you prefer. Maybe even put them in a sprinkler valve box so they're easy to find and access for inspection or replacement.

Overlapped coverage is a good thing. Do you notice that the drawing shows two quarter-circle heads overlapping to cover the top-right quadrant and another two quarter-circle heads covering the lower-left quadrant? That's good. Now look at the upper-left quadrant. There's just one head covering much of that space. To keep the grass green there, ie to get enough water in that quadrant, you'd have to water until the other two quadrants become marshy.

Fix it by adding more heads. Add a half-circle head in the middle along the upper edge and another along the left edge. Finally, change that one weird little sector at the interior corner by the house to a 3/4 circle.

Choose a sprinkler model that has a throw radius about half the width of the yard. Distance can be fine-tuned for the whole system first by adjusting the pressure regulator and then by adjusting a screw on each sprinkler.

Avoid the temptation to put too much GPM demand on a zone. If you add heads and choose the flow rates as I suggest the total demand in the turf grass would be 5*1 (1/4 heads) + 2*2 (half heads) + 1*3 (3/4 head) = 12 GPM. Divide that into three zones of 4 GPM each to avoid straining your water supply, which manifests as sprinklers not spraying as far nor as well as they should.

Water needs for shrubbery, potted plants, etc are different than for turf grass. You'll probably do well to put all of those together on a zone that does only these and no grass.

Usually sprinkler systems are on a second water meter so that they are billed at lower rates than water used in the house. A municipality approved anti-siphon/backflow valve will be required and may cost a couple hundred dollars. Very likely you will need a diagram for approval and a final inspection when finished. Pick a pipe size and stay with it ; I put in my own system and used both 1/2 and 3/4 pipe . So when I make repairs, I need two sizes of parts, inconvenient.

Not the answer you're looking for? Browse other questions tagged electrical plumbing irrigation or ask your own question.

2
Can I connect a water hose to an irrigation system?
0
How can I determine existing well PSI / GPM for dedicated irrigation well
2
How can I fairly distribute water pressure and flow throughout my home?
1
Light contact tab melted into plastic housing
0
Rooftop garden irrigation: Some plumbing questions