Is my neutral wire tied to my ground? 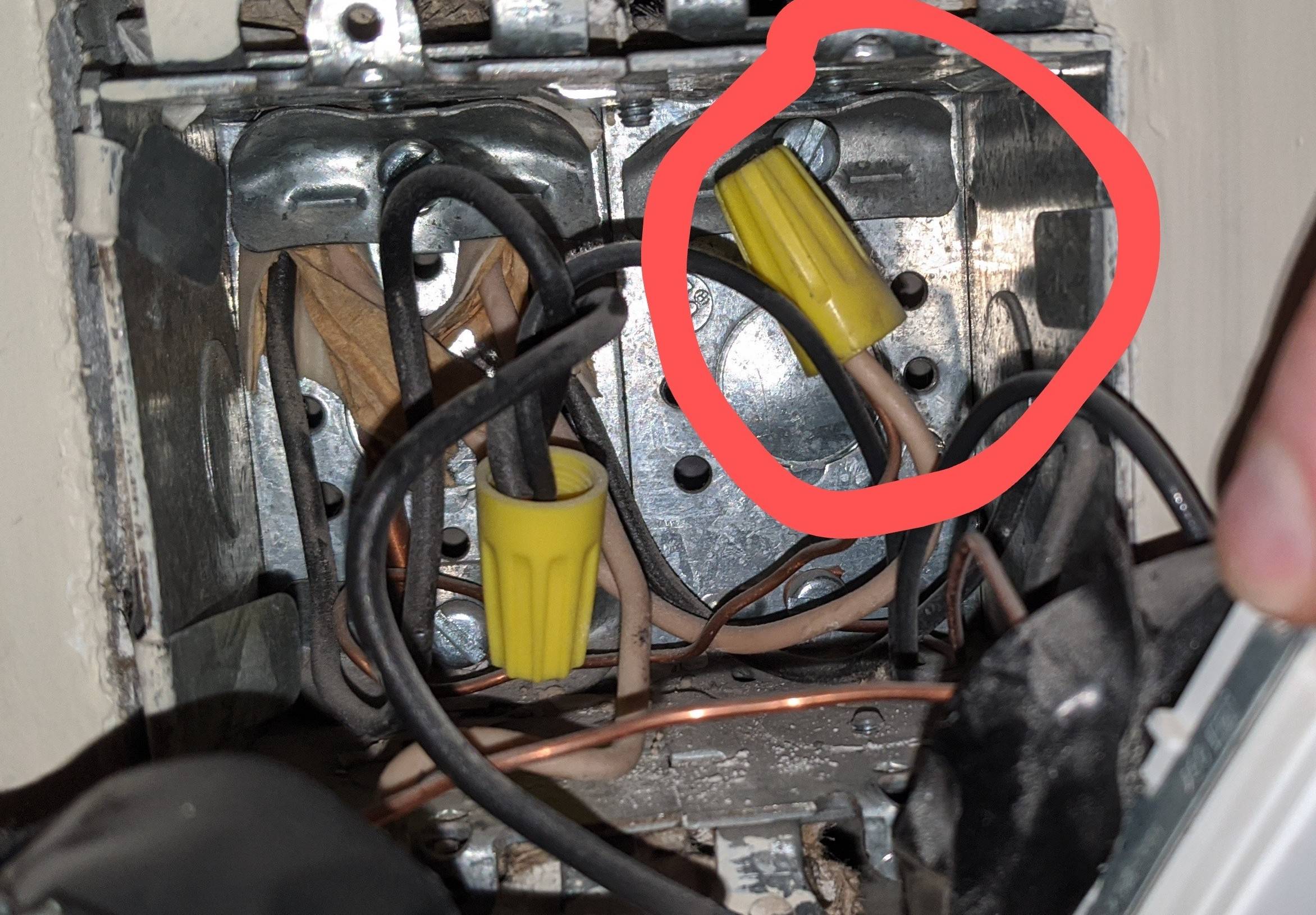 I've bought a timer switch for my bathroom that requires a neutral wire.

On opening the switch box, I see a white wire screwed to a copper ground that is screwed to the back of the box.

Is that my neutral wire?

The other wires are black (hot/in, split between the two switches), gray (load to lights from the right switch), and white (load to fan from left switch).

Edit at the top:

OK I got a better look at your wiring and I see what they did (party foul!). And I'm going to 'upgrade' my... this isn't good.

Unfortunately, there is no return path for the electricity. You said there's copper coming into the box- which I can't see from the wires- so my guess is they stole the bare copper wire to become your return path. Had they run a 3 wire (Black, Red, White, copper-ground) they'd only need one wire path.

I hacked together an image. I suck at mousing, laughter should help ease the pain.

On the left you can see a white wire coming off the switch and going up into the romex on the right (runner 1)- that is now carrying power. The party foul here is it should be labeled - either with a black sharpie (color the end) so people know it's hot, or wrapped with some black electrical tape. I mean, it is sort of obvious, but I believe code calls it out anyway.

On the right you can see a black wire coming off and traveling up into the romex on the right. That's also carrying power, so it's 'runner 2'.

So your switch box itself is being used to tie ground and neutral together.

Since you said this is in the bathroom... I'll be honest with you- this is REALLY dangerous. Like... get yourself or your family killed dangerous. Assuming it's within 6' (2 meters) of a sink with water, you could theoretically provide a very good path for electricity to make it to the water and electrify yourself IF something else goes wrong.

Reason being is that whole box is carrying power. It's hard to see from just the one photo but I don't think I'm missing something.

You can sort-of fix this. But maybe just not in the way you'd like. Simply put you don't have enough wires going out of the box to feed the fan and light. Now interestingly there are a couple of solutions that might work but that would entail fixing/modifying the fan.

I assume the fan and light are integrated into a single unit?

The easiest and safest thing to do to day without bringing in an electrician is to disconnect the switch/timer for the fan, and wire the fan and light together. That means when the switch comes on, the light and fan turn on at the same time. I know this is NOT what you want, but it would be a temporary fix until you can have someone come run a 14/3 wire up the wall and into the fixture.

If this is going to be OK, let me know, and I'll write up some more detailed instructions.

If you can take some more 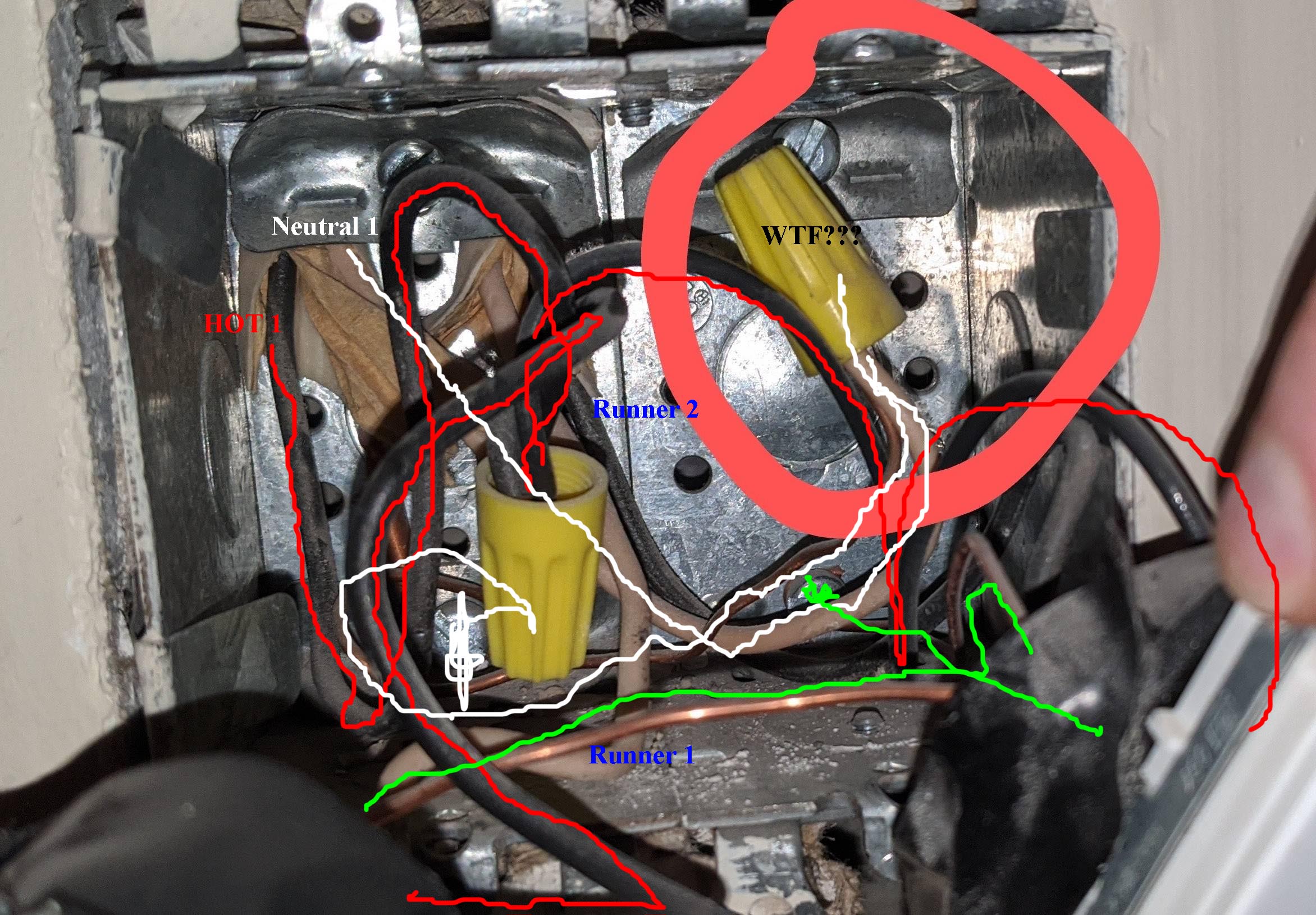 photos too showing copper lines I'll try and think of how else it might be wired.

So that's really not good to see. I tried to visually trace your grounding, and it appears that the ground comes from the metal box to the outlet on the right, then over to the one on the left. And at no point do I see it go anywhere else.

So with that, no, your box is not wired right, and more importantly... it's a hazard because your 'neutral' which is your 'return path' for electricity is hooked to the metal ground box. It goes hot, you go hot.

I also don't see any bare copper coming into the box from anywhere. If it is there and you take a photo that'll help.

So first things first, and I'm a bit uncomfortable saying this, you ought to find someone that can give that a good look and test things before you disconnect it.. but I'd get that bare copper wire and your neutral white broken apart.

Then you could use that neutral, assuming it's not wired even funnier than the box.

Can you describe more of what the switches do? I assume that one is an outlet, the other is a switch- thus power (and neutral) coming in are feeders, then the line going out is broken at the switch, and the neutral coming back from that is tied into the neutral going out with the feeder.

3
Wiring a ceiling fan with black, white, red, green in ceiling box and two wall switches
1
Installing smart switches, instructions don't match my wiring?
0
Upgrading to smart light switches but have only one neutral wire in the box
0
How do I wire my ceiling fan with two switches (one for lights the other for fan)?
1
Replacing timer with no neutral wire
1
Do I have a neutral wire?
0
Connecting 3 wire timer to 2 wire circuit
2
Help: Black and White Wires on Switch but No Neutral?